A couple of thoughts for the week ahead

Thanks for listening to the 3 brief little conversation snippets between me and Harry Nowicki over our breakfast by the Quay today.

They really set the scene for another week that'll bring us closer to justice in The AWU Scandal.

I don't think there'll be one uh-huh moment.   The cover-up is going to take a lot of chipping away and no one could really know where the breakthrough will come from.

But this week I'll be getting a couple of detailed interviews with Bob Kernohan on the record.

Harry is working to get a repentant Ralph Blewitt out here so that Ralph can tell his story in his own words.

There's a Freedom of Information application that's almost ready to be satisfied by Victoria Police in releasing their files on the Ian Cambridge's report to the NCA (and its referral of the alleged frauds to Victoria Police) that should come out this week.

There's the WA Minister Murray Cowper (former copper) has been given the task of enquiring into the WA BCITF and its payment of $516,000 to Thiess/the AWU - I'm hoping to hear from him any day.

I know there are several other live lines of enquiry that ought to remain confidential for now but I have every confidence in each of them adding significant weight to the calls for a proper enquiry and justice in the scandal.

There probably won't be a killer punch of itself.  But when a properly commissioned enquiry gets underway - look out!

Harry, is the Prime Minister a crook?

Hello from Harry Nowicki - much more to come!!!!

Breakfast on the Harbour with Harry

I've been asked now a couple of times why Bob Kernohan received $6,500 from one of the accounts operated by Wilson.

From the start of my dealings with Bob, I have found him up front and at pains to inform me fully about everything that went on in The AWU Scandal to the best of his knowledge.

When Wilson's frauds were discovered and Bob realised that he had been paid out of one of Wilson's dodgy accounts, Bob went immediately to police and made a complete statement.    Bob's statement would expose him to the penalties of perjury if false.  He also declared the money as income to the ATO, offset against expenses he incurred in earning his income (that being electoral expenses as a union rep seeking to remain in office).

Here is his statement to police, which I publish with Bob's permission (no with his encouragement!) 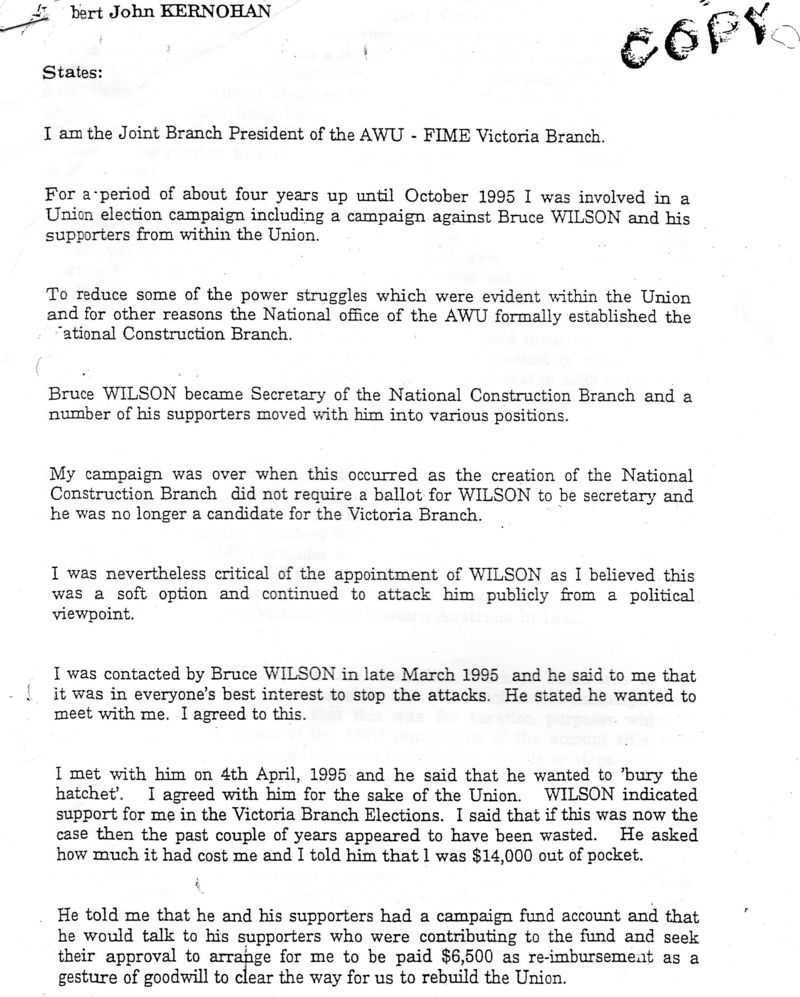 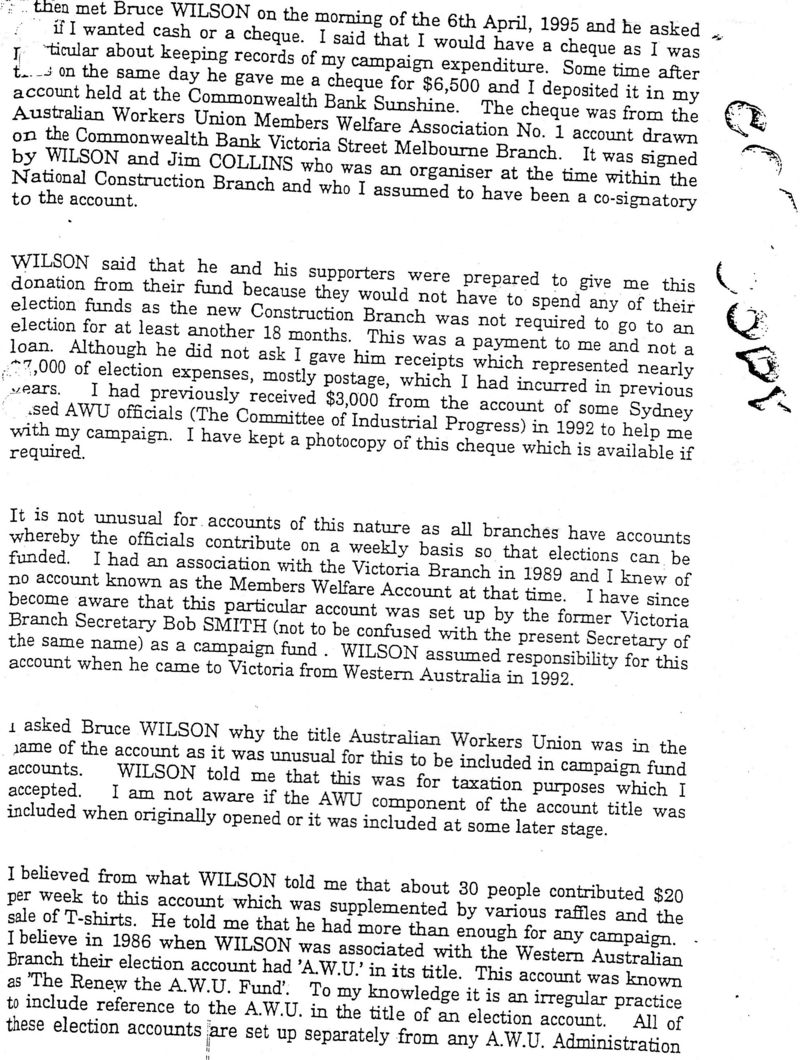 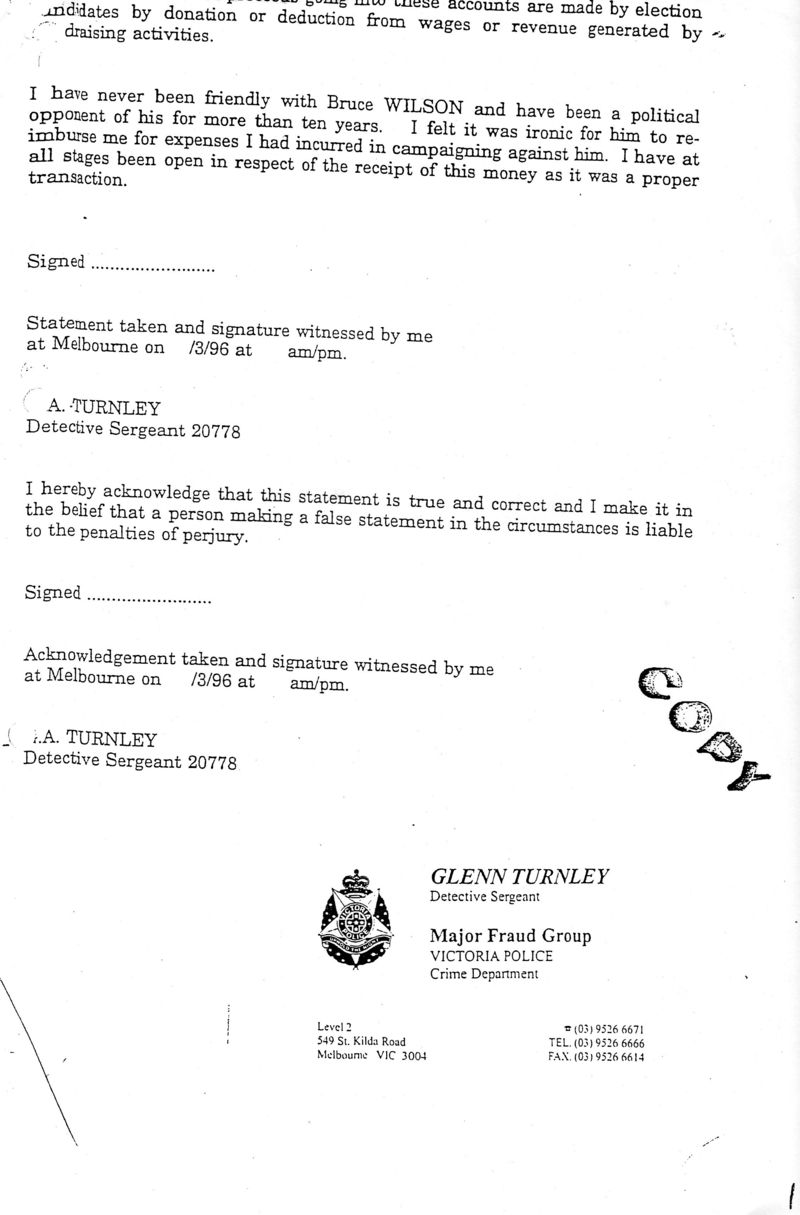 A reader shares his thoughts about the sub-prime crisis

It may be that DSM-IV-TR of the American Psychiatric Association provides a way of understanding the behaviour (past and present) of the Prime Minister:
http://www.psychologytoday.com/blog/evil-deeds/200908/masks-sanity-part-four-what-is-psychopath
The FBI take the matter further to argue that politicians and those that commit serial crimes of violence are only distinguishable by the differences in how such dimensions as anger are acted out. For the politician it may be extra-marital affairs and/or corruption; for the violent offender it is usually an act of physical violence, or tormenting vulnerable victims. Whatever she said to Fairfax and News Ltd it scared hell out of them.
http://www.thedailybeast.com/newsweek/2010/11/02/are-all-politicians-crazy.html
Park Deitz, the psychiatrist, mentioned above, happens to be a friend (and PhD superviser) of a psychologist friend of mine and he has a first rate reputation.
(name supplied - a fairly prominent person)

Just a couple of general comments about the truth and principles

I have a complete, unassailable confidence that our community will demand and will get justice in The AWU Scandal.   I think that like the United States after Watergate, we'll be much the better for understanding what went on and how far the tentacles (or the backpacks of cash on flights) went.

The saga and its reporting is unfolding pretty much as I'd expect - the only surprise has been the Liberals failure to pick the issue as one of baseline morality and thus a very important issue to their political base.   The media's confusion, inaccuracy and incurious barracking for the sub-prime is no surprise, I remember how long it took to get people in the media to understand what The Offender had fessed up to.    We will get there.

I know that there is so much more detail that's yet to be reported.   Documents, letters, copies of cheques, deeds of settlement and repayment of money, confidentiality agreements, statements from witnesses, potential grants of immunity - the clear mis-reporting of the BCITF isn't a bad place to start either.   Too many people know who did what - and always remember "it's the cover up".   The story will be told, the guilty will pay their debt - and we'll all gaze in disbelief at the things people do.

Now that said I'm finding that it takes a hell of a toll to day in and day out focus on this egregious, amoral behaviour and its cover-up.   It's even more galling to know that one of the prime participants in the scam is now calling very big shots as the PM.   When I say prime participant - Julia Gillard's affair with Bruce Wilson went on for 4 and a bit years.   Their lifestyle as a couple was sumptuously funded by Wilson's access to extra-curricular funds - or shall we say slush-funds derived through "innovative workplace reform".   We tend to get a bit hooked up on the question of "did the sub-prime's house renovations get paid for by the account?" when I think it's equally valid to ask did she get a free Mars bar bought with money Wilson knocked off.   He was on a union rep's pay with a wife and 2 boys to support in Perth, even the ingenue would have had to have had a clue about the conspicuous money.

This morning I was meant to go into town for a couple of hours with Harry Nowicki - but I have to be frank with you, I just couldn't face another couple of hours of crapping on about the AWU!!!   Harry and I will meet tomorrow but for today I needed a break away from theories and reconstructions.

So I am going to do something positive.   I would like to tell you about the greatest man I have known.   He died suddenly when he was 56 in 1996 - he's my dad.

I have to start with a huge caveat.   I am not half the man my dad was.   He was the most clearly principled person I have ever known, and one of the smartest too.

Dad was a Fitter and Turner with the NSW Railways for 40 years.   He started his apprenticeship on steam engines and Westinghouse brakes in 1956 at 16.   At his funeral St Joseph's Catholic Church Rockdale was packed with Muslims, Croats, Yugoslavs, Greeks, Macedonians - the list of blokes who'd normally blue each other but who'd been settled down together with my dad's help was massive.   A couple of months after dad died there was an incident with a knife at dad's old work at Mortdale, dad's brother Peter who also worked there said all the blokes said that would never have happened if Geoff was still alive.

So what made him most special?   Principles.   I could tell you in advance pretty much every decision dad would make.   The big ones were always made on principles and morals.   And he was rock solid.

Lots of blokes used to be like that.   Dad was a union man, a tradesman, a craftsman.  He never once let me down, not once.    If he said he was going to do something he did it.

That's why I get very crook about Australia right now.   Haven't we got someone better to be the boss than dubious piece of work we've put in there?

While I'm in a bit of a nostalgic mood, could I please leave you with the eulogy I hope went some way to recognizing dad's life.    Amazing how much better that's made me feel to spend a bit of time celebrating the life of a good man! 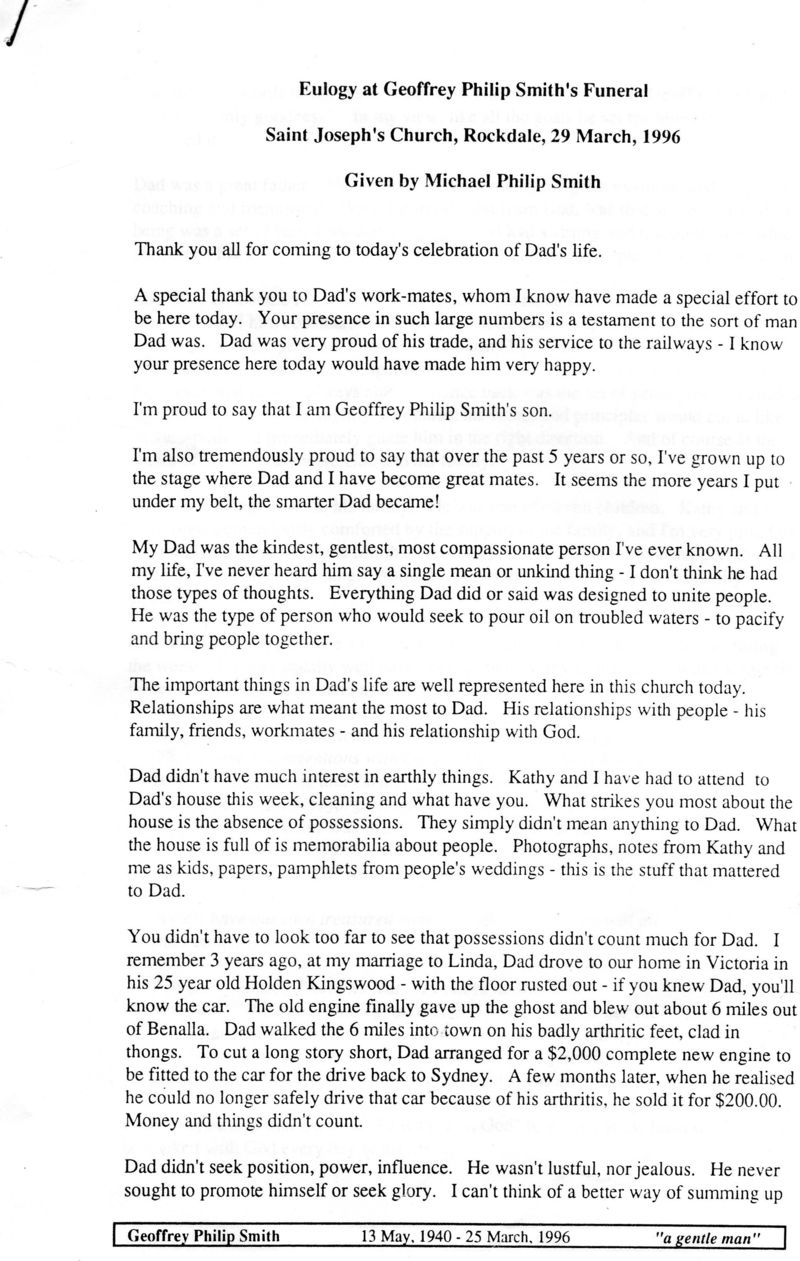 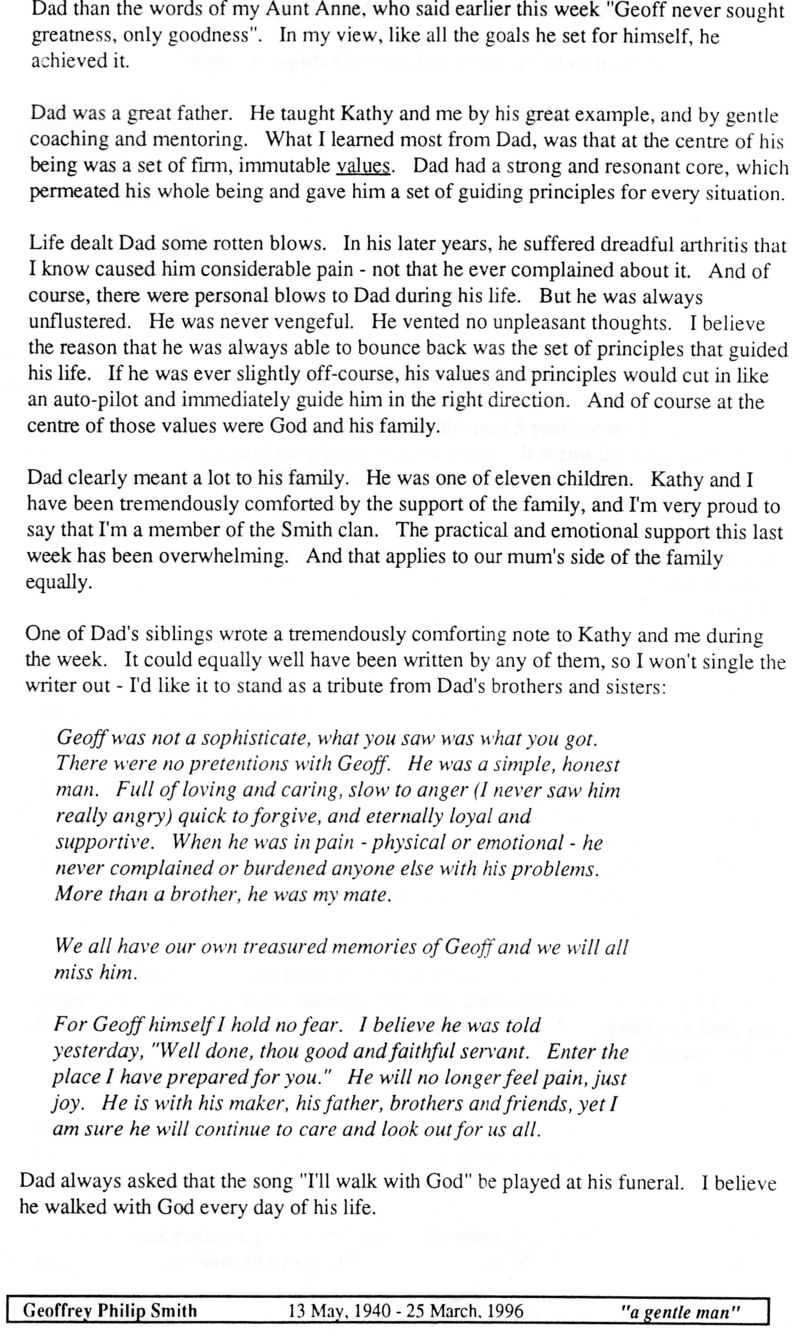 This book by George Lakoff and Elisabeth Wehling is big news in the United States.   It's being held up as showing the way forward for Obama's party, the Democrats.   It's about telling the truth and having morals and principles.
The book says that conservatives tend to get this stuff a little more naturally - they're more naturally oriented to things that make moral sense and are true.   Lefties tend to have policies, rules, laws and controls - without necessarily having a clear nexus to principle and morality.
The tragedy is that this book is meant for people who have lost their way in life.   The simplest example I can give is the "there will be no carbon tax" statement/undertaking/utterance/promise - call it what you will.   It should have been a simple transaction - bewdy, that's Julia Gillard, I know her, she said it - bewdy I can rely on it.
Instead we have the convoluted logic that says it's a price not a tax.   Or yeah it is a tax but we had to do the deal with the Greens to keep power - who wouldn't?   Or even worse "we always said we were going to do this".   Gillard didn't have to break her word - she did it because something brighter and shinier and worth more to her than her character came along.
I don't subscribe to the view that your moral compass in a leadership role should be adjustable to dial-up short-term advantage.   Do that a few times and you give away your character.

Never have truer words been spoken than the few first paragraphs in the precis of this book - "Voters cast their ballots for what they believe is right, for the things that make moral sense".
I thought this review spoke volumes too.
“Republicans offer values. Democrats offer policies. Guess what? Values often win, even when the policies are more popular. It’s about time Democrats learned how to talk (and think) in terms of the underlying values that make them Democrats—values that are more widely shared by Americans than the values Republicans espouse. Here’s the essential handbook for thinking and talking Democratic—must reading not only for every Democrat but for every responsible citizen.”

Tragically the people who will read this book will be very much like the young muso who goes up to the jazz great and says "can you teach me about feel".   If you've got to ask, you haven't got it.   I can see so many of this undergraduate cabinet in the sub-prime's ministry lining up to take the course.
Here's a link to The Little Blue Book blog.
Lenore Taylor is a polemicist with The Pamphlet (the publication once known as The Sydney Morning Herald).   Lenore has acknowledged the traditional target of the Fairfax Press today in this article about Tony Abbott
I think Lenore writes very well about the new discovery made by the left in The Little Blue Book.   But fancy that it would take someone to write a how-to manual about being moral and telling the truth for lefties to go "wow"!!!!!