If the grown-ups don't come home soon, this could get serious.

Paul Howes and the sub-prime - The AWU Affair continues lovingly

UNION leader Paul Howes has hit out at Resources Minister Martin Ferguson, accusing him of repeatedly undermining the Gillard government.

Mr Howes said Mr Ferguson's contradiction of Julia Gillard on the source of power price rises should come as no surprise.

"Martin Ferguson bagging his own side, there's nothing new in that," he said.

What bet-my-house doesn't see is that it's Martin Ferguson who is on the side of the workers.   He isn't bagging his own side at all, he's consistently acting in their interests.  It's bet-my-house and the sub-prime who have a case to answer.

The Sub-Prime and her sub-prime Attorney General

The undergraduate nature of the Labor Government's ministry is becoming clearer and clearer.

Grown-ups are embarrassed.   Lindsay Tanner - gone and talking.   Martin Ferguson - talking out today against the sub-prime's spin on electricity prices.   Conroy, Shorten, Roxon - all the undergraduate types are clearly having the time of their lives with the sub-prime.

Which brings me to Robert McClelland, the former Attorney General.   Of all the ministries, it is the office of Attorney General, the first law officer of the Commonwealth that is the most "independent" of the cabinet roles.   It's a tremendously important job with big implications for the way the country and its laws operate.

To despatch an Attorney General during a term of office is a big deal.   A Prime Minister or caucus would want to have a very good reason.  Gillard had none.   It was a nasty, vindictive move to dismiss McClelland from an office in which he was performing steadily and well.    But to replace him with the disgraceful Nicola Roxon is almost beyond belief.

Roxon today is left with indelible-egg on her face.   The Commonwealth should be a model litigant in any court proceedings.   Roxon's grandstanding about James Ashby's claim against the Commonwealth for sexual harrassment is now revealed for what it was - unspeakably improper abuse of office and potentially a very serious contempt of court.

This is a quote from an ABC piece about Roxon's statements at the time the matter was brought before the court.

Ms Roxon says the Commonwealth strongly believes the case against Mr Slipper is an abuse of process that has been brought for an ulterior purpose.

"It will be clearly shown and this will be argued in the court that there was in fact clear intention to harm Mr Slipper and bring his reputation into disrepute and to assist his political opponents and that was the purpose for the bringing of this claim," she said.

The Attorney General has a responsibility precisely not to say those sorts of things.  She can't magically "unbecome" the Attorney General to make a political statement and then hey-presto herself back into the role.   The danger of her silliness is all the clearer when it turns out that the case had at least $50,000 worth of damages merit - very much at the higher end of the scale.

Gillard had no business sacking McClelland but she did it any way.  She now has a very clear case of misconduct on the part of Roxon in her role as Attorney General.  Any bet which way she'll jump? 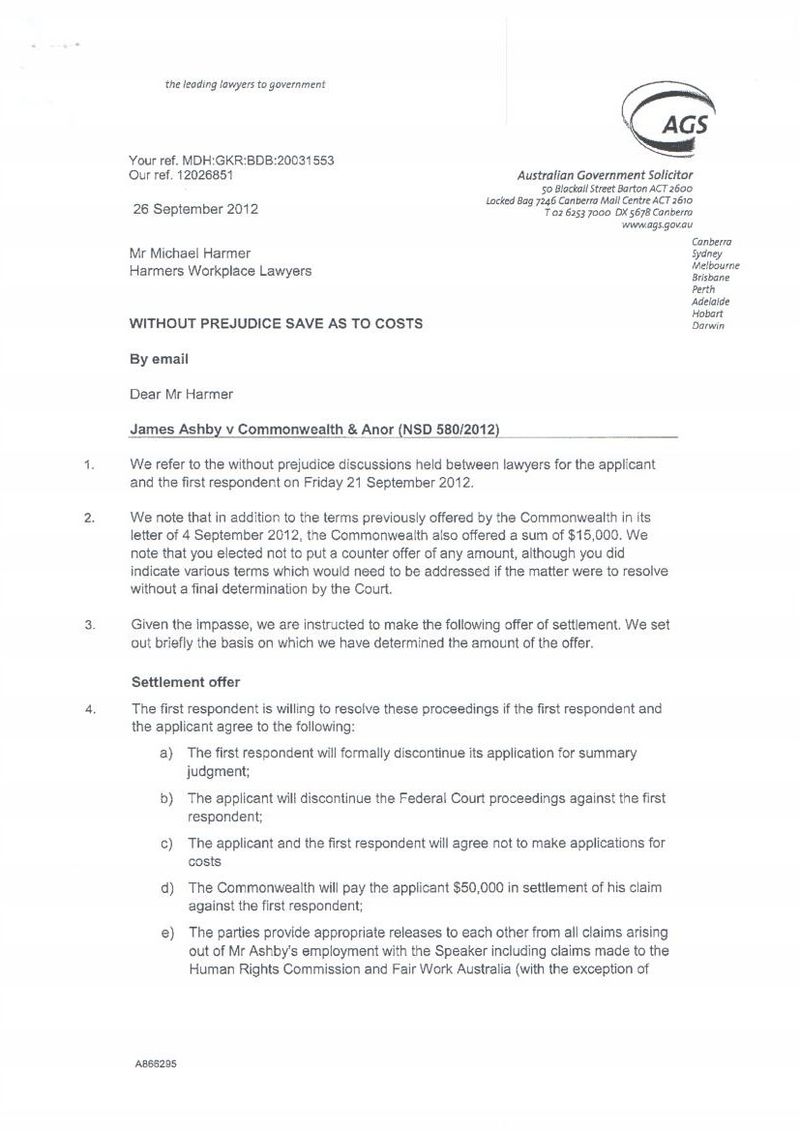 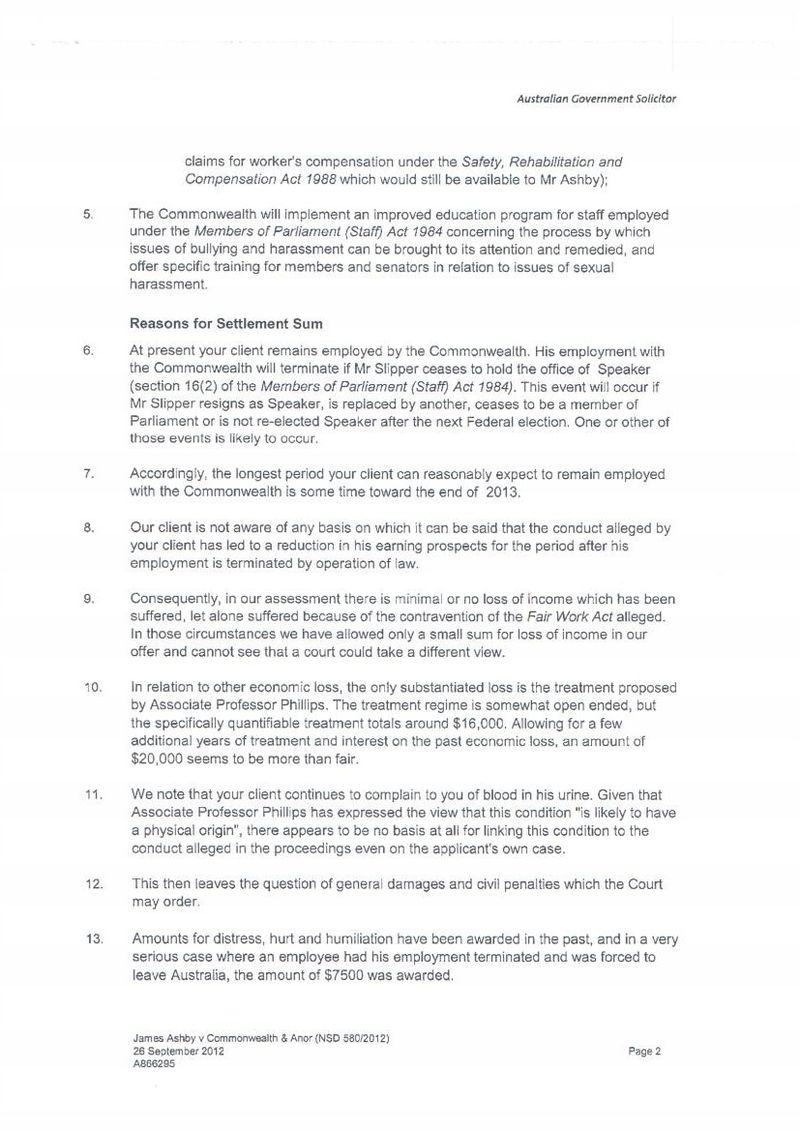 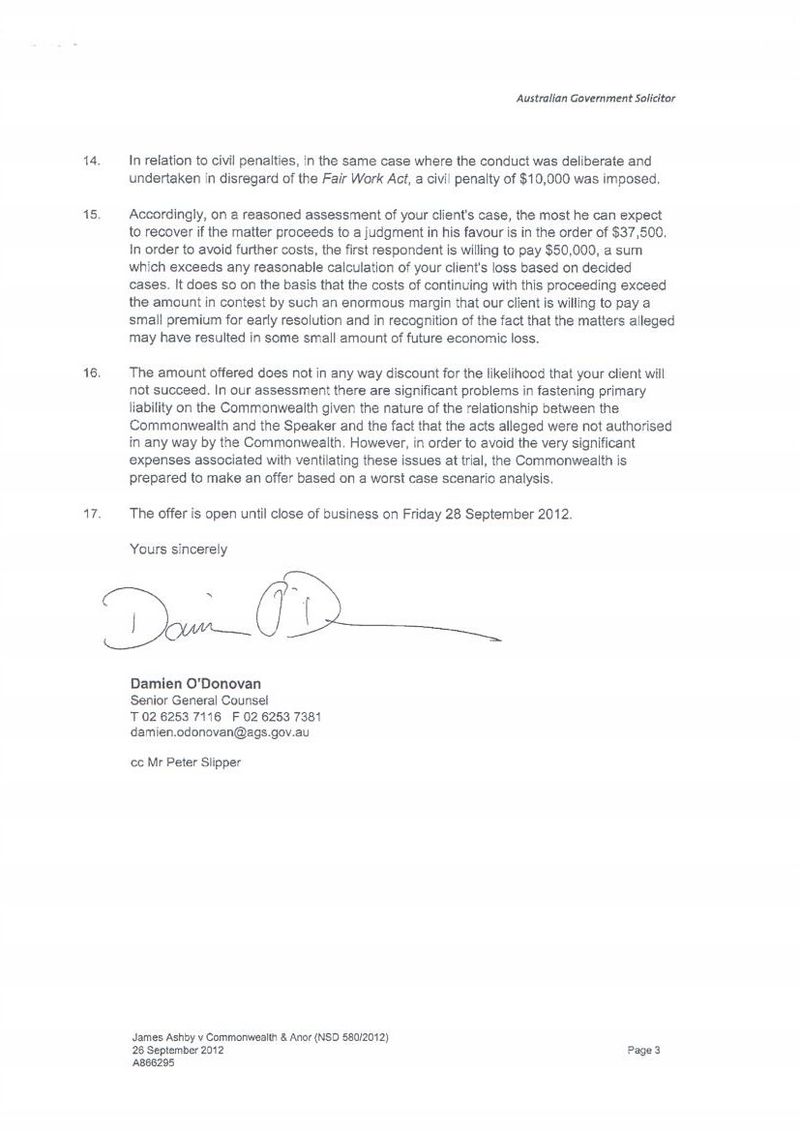 The AWU Scandal - no one likes being lied to

The defamation case brought by the not-very-faceless boss of the AWU, Paul
Howes , against the aircraft engineers’ union boss, Steve Purvinas,
hit the Victorian Supreme Court yesterday, with Justice Beach taking all
of 90 seconds to proceed with the case after the AWU’s lawyers provided a
48-page diary of the wonderous ways they’ve tried to serve Purvinas for three
months (based on his instructions by phone) – at airport lounges, on his front
porch, at his office, etc. Justice Beach decided to give Purvinas the minimum 30
days to prepare his defence.

According to the statement of claim, it comes down to an email Purvinas sent
to his members, in which he accused the AWU of being “nothing more than a group
of company advocates in union shirts with morals that Tony Abbot [sic]
would be ashamed of ... The AWU are delivering to Qantas an on-tap group of
strike breakers.”

Purvinas’ hatred of the AWU may explain his attendance at a recent event held
by the neo-con Australian Taxpayers Alliance addressed by former 2UE shock-jock
Mike Smith, who was there to speak about Julia Gillard ’s days as
a solicitor at Slater & Gordon and her involvement with former AWU official
Bruce Wilson, and who acknowledged Purvinas in the front row.

This graphic from the Sydney Morning Herald from July 1996 was a useful aid in understanding what went on. 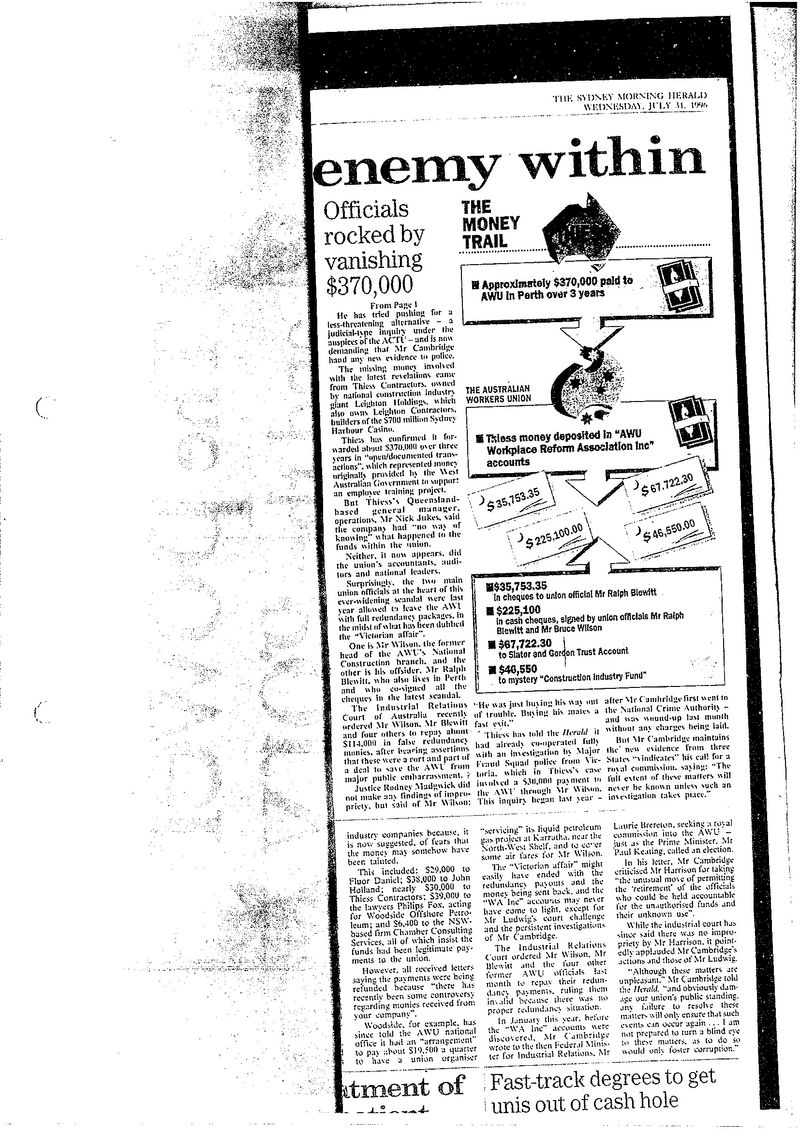 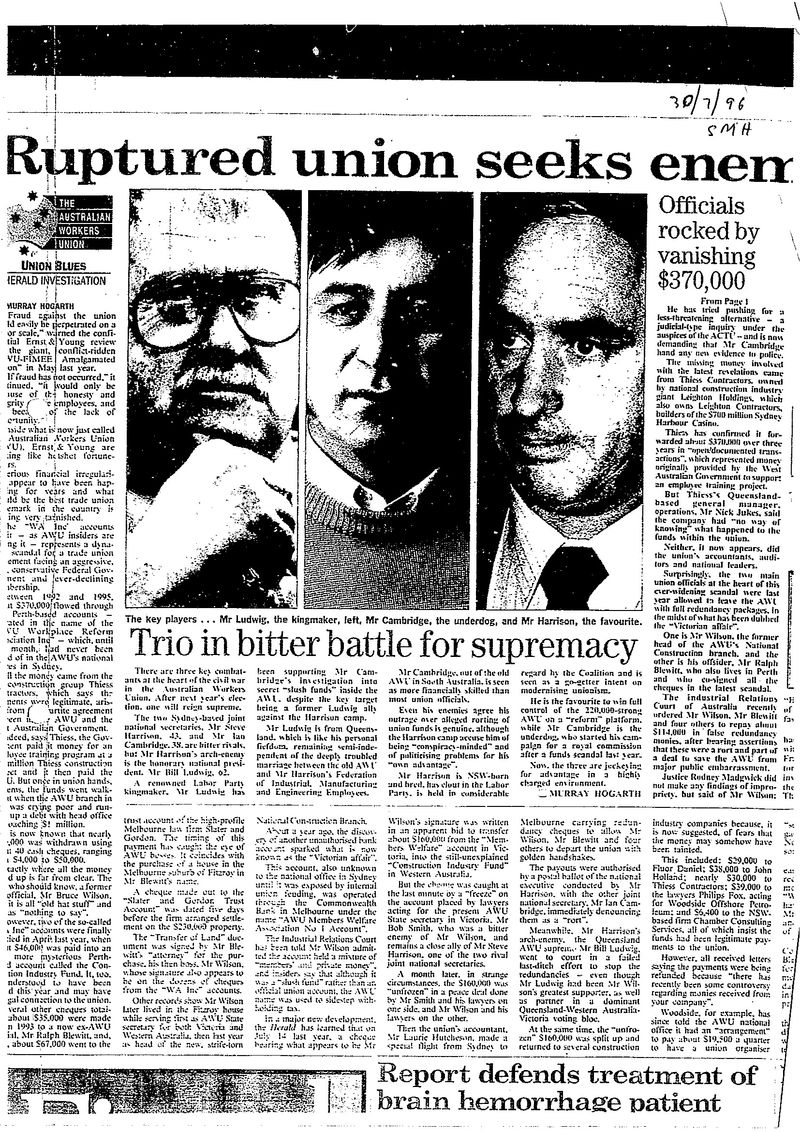 I think this was an important piece of reporting at the time.   I know that you won't be able to read all of the words in this poor copy image - so here is a link to a PDF of the text.

My interview with the foreign television network

I have been dealing with senior people in the company's English Language news service.

Over the past couple of days I have recorded a number of interviews with a reporter who went to uni here in Australia.   He's worldly and very well informed about The AWU Scandal and Miss Gillard.  Australia is relatively big news in Sri Lanka with asylum seekers, aid and lectures on morality and human rights from our government big items on the Sri Lankan agenda.

News First has a crew and reporter in New York for the UN General Assembly.

Yesterday I was told that a story had been completed and was ready to be presented in the 9PM nightly news bulletin.   I had substantial correspondence via email and Skype with the reporter providing links to further sources and corroborating published stories about details of the AWU matter.

I have today been told by a senior representative of News First that the story was indeed listed on the running sheet for the 9PM bulletin.   He told me today, about 45 minutes ago, that he received a phone call last night his time just minutes before the bulletin was due to go to air instructing him to pull the story.   That is a senior official of his company instructed him not to broadcast the story.

Here is a link to Australia's $45M aid program to Sri Lanka http://www.ausaid.gov.au/countries/southasia/srilanka/Pages/home.aspx 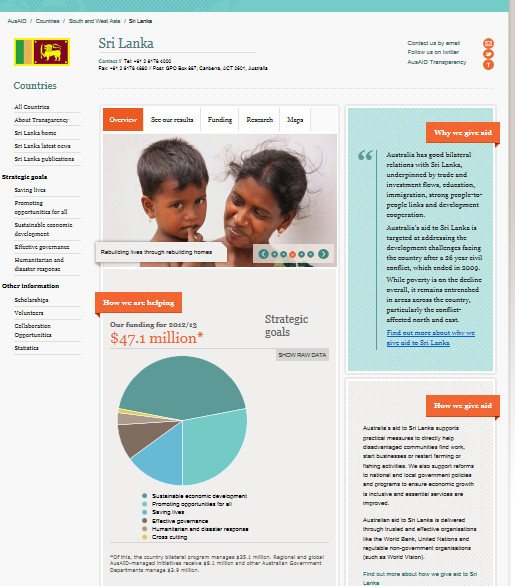