Viruses of the computer and human types

I have received a large number of emails and phone calls from readers who tell me that they get a malicious spyware message when logging on to the blog.

I have had troubles with my own computer and the blog too.

And I had a call from my own bank yesterday so all my credit cards etc are now being reissued.

I have that latest spyware/firewall and other protection and have had the computer cleaned out.

Please drop me a note this morning and let me know if normal operations have resumed.

Australian newspaper The Age reported today, that a key former accountant for the Australian Workers Union, Russel Pearson, has undermined Prime Minister Julia Gillard's depiction of the slush fund which she helped set up in 1992 as a legitimate association needed to help finance union campaigns.

The Age reports that Gillard gave extensive legal support to the establishment in Perth of the Australian Workers Union Workplace Reform Association from which more than four hundred thousand dollars was stolen by her then boyfriend.

Meanwhile, Australian Investigative Journalist, Michael Smith alleges that compelling evidence points to a scam that can be traced right to the doorstep of incumbent Prime Minister, Julia Gillard.

Smith speaking exclusively to Newsfirst, said he is baffled by the authorities' failure to initiate an investigation, in what he claims is a Prima Facie case.

For more on this story, tune in to prime time news at 9 tonight.

Here's the teaser.  It's in local languages first up - about 4 minutes in it's English language.

The Redundancy Cheques - who signed them? The man who took Mark Latham's seat!

Steve Harrison is one of the signatories on the rushed through redundancy cheques that Wilson, Blewitt et al received as they left the AWU.

You'll recall that Ian Cambridge spoke about a member of the union's staff flying from Sydney to Melbourne to deliver the cheques and have them cashed.

Well I'm told that the other signatory is Chris Hayes MP, the Federal Labor member for the seat of Fowler, elected in 2010.

He's been in the Federal Parliament in another safe Labor seat too, Mark Latham's old seat of Werriwa, which Chris won after Mark gave it away in 2005 and again in 2007.

Chris's bio notes say that he was the Assistant National Secretary of the Australian Workers' Union before he went into the parliament.

I'm told this is his signature on Bruce Wilson's cheque.

And here's his email address. 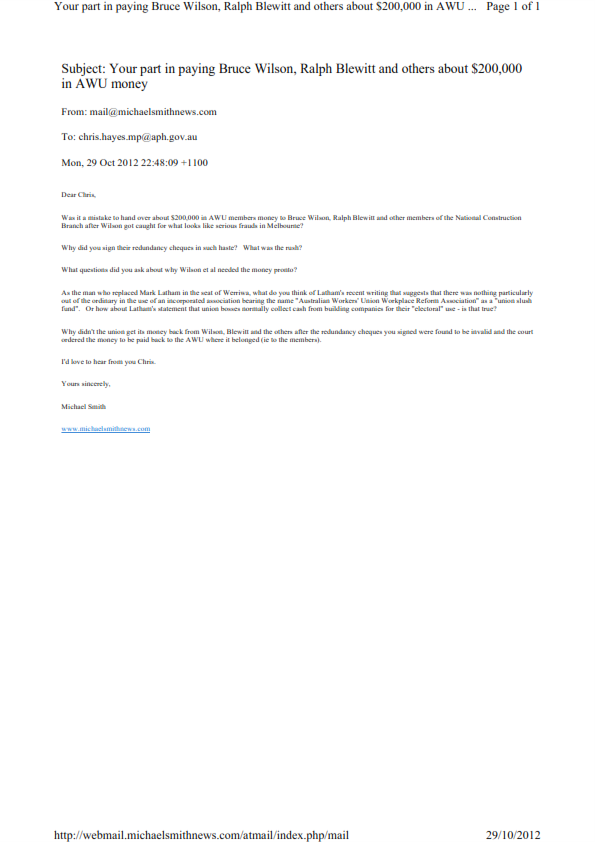 You will have seen various versions of the Affidavit sworn by Ian Walter Cambridge on 19 September, 1996 in matter 2082/96 in the Australian Industrial Relations Court.

Now I think for the first time you will see all the exhibits to the Affidavit.

The First download contains Cambridge's Exhibits IWC 1, 2 and 3, all about union rules

Exhibit IC 4 is referred to on Page 9 of the Affidavit, "Attached hereto and marked IWC 4 are the Application forms and Rules of the Association.   I do not know what process Ian Cambridge and his solicitors used to gain access to these papers.   Presumably they were returned under subpoena from the AIRC to the WA Corporate Affairs Commissioner.   Whether the return of the subpoenas included other correspondence (particularly the letter of comfort from Ms Gillard vouching for the Association's bona fides and other correspondence) or not is unknown to me.   I don't know whether Mr Cambridge had the letters and didn't exhibit them or not.

These next few exhibits describe a few payin slips for the AWU-WRA - a $46,550 cheque to set up the Construction Industry Fund (once Wilson knew he'd be running the National Construction Branch) - note the chutzpah here, the initial address for the account is a PO Box in Fitzroy Melbourne, then they move it to Ralph's home address in Perth after they get the flick - but they continue to operate the account and to invoice Thiess.   Is this the action of a person or persons who believe that the law or their former employer is seriously pursuing them?   Or was the fix in even then?   Just remember the dates that Wilson was sprung and got the redundancy money and left - 17 August, 1995 it was all over.   Check out the dates that Construction Industry Fund continues to operate and receive money (from Thiess) - right up to early 1996.     Gillard knew about AWU-WRA and apparently said nothing.   There are statements for the WA Election Fund, again operated out of Blewitt's home address.   Finally there are pay-in slips for a large amount of money coming from Thiess, John Holland, Philips Fox, Chambers Consulting, Fluor Daniel etc.   About $170,000 came into Member's Welfare Account NO 1 (3008 10000 9028) during a few weeks.   It seems to be the case that this was the "event" that brought Wilson unstuck.

The last exhibits showed quite a flurry of fund-raising by Wilson and those close to him.   Notwithstanding the union rules, about $170,000 raised from construction companies (God knows on what basis) was paid into the AWU Members Welfare Association NO 1 Account in a few weeks over June/July 1995.   Wilson was sprung in July 1995.   The money paid to the union in that period (but deposited into a slush fund - read the paying slips carefully, many just say AWU) was returned to the companies as part of Wilson's departure deal.   Maurice Blackburn represented Bob Smith (the incoming Victorian Branch head), and Slater and Gordon represented Wilson.   This next exhibit is the Affidavit of Brian Kilmartin, a partner in Con Sciacca's law firm, representing Bill Ludwig.   Basically the affidavit tells the court about the willingness of the companies that paid the money, had the money returned to them and will now be asked to send that money back once again to the union.  I'll post the letters from the companies soon.   Some declare that the payments represented Union Dues, or members money.    It's one of the most peculiar elements of the whole saga, Wilson got the money in, it went into a slush fund, he was sprung, under legal advice the  money was returned to the companies (Detective Sergeant TURNLEY of the Victoria Police Fraud Squad who wrote off the matter said that action was to Wilson's credit, one would imagine that the Detective had been spoken to by lawyers involved in the matter).   So this affidavit tells you how the money will come back into the union.

I just thought I'd do a quick post to let you know I am busily working away at the desk with a huge sheaf of papers that I'm scanning in and collating to put up on the blog.

I've received a few notes from various people suggesting that there's a somewhat depressed tone to proceedings today.   There shouldn't be!   I must admit I was suprised to hear from Minister Cowper's office that they look like writing off my report about the BCITF, but beyond that it's been a very positive and progressive day.

The fact that Ms Gillard doesn't answer the questions put to her in the parliament about her very important role in this very important story in the nation's political history speaks volumes.   Those who follow the story are capable of drawing an inference from the sidestepping and dissembling.   I wouldn't be too worried about the theatrics, that's secondary.   Julia Bishop is a very skilled  and credible lawyer and I'm sure that having commenced the very reasonable questions about the Prime Minister's conduct she won't let up.

I can tell you that there's a large number of enquiries underway into various aspects of this matter this week.   There's no reason for subdued or depressed thoughts - things are progressing and every day we find out more and more about the truth of what went on.

I have great faith that justice will be done!

I have today spoken with Minister Murray Cowper's office in Western Australia.   He is the Minister for Training and Workforce Development and my letter to Premier Barnett was referred to Minister Cowper for action.

I am told that Minister Cowper's staff have concluded an enquiry into the matters I raised in my letter - then again I was told that the week before last.   We had been promised a letter last week in answer to my letter, I'm told today that we'll get something in writing in the next couple of days.

I am not optimistic about the prospects for further investigation.   I can't imagine how the status quo can prevail, as you'll see in the attached letter below.

FYI here is the original note to Premier Barnett (I know I improperly referred to the Project as the Dawesvill Cutting, it's the Cut!).

In 1991 Thiess Contractors was awarded a contract to build the Dawesville Cutting.   At the time the AWU and many construction companies were represented on the board of the Western Australian Government's statutory authority the Building and Construction Industry Training Fund.

In 1996 the Western Australian Police fraud squad received a complaint from the AWU regarding the apparent embezzlement of some hundreds of thousands of dollars from the AWU by Bruce Wilson a former union official.

The Fraud Squad determined that in the matter reported to it, the proper complainant was Thiess.   Thiess then advised police that it did not believe it had been defrauded and thus it would not furnish a complaint or statement of loss to the police.   The matter was closed with police advising that no offence had been detected.

Premier I am concerned that in its Annual Reports of FY ending 1993 and 1994 to its shareholder or responsible minister, the BCITF reported a manifestly false position regarding the acquittal or disposition of the $516,000 it collected under the "BCITF and Levy Collection Act 1990" and which it then advanced to Thiess for "workplace reform" and training.

The truth is the money that was earmarked for "workplace reform" under an MOU between Thiess and the AWU actually went to the union slush fund set up by Julia Gillard.   It went out of the slush fund in cash and to buy a house in Melbourne.

I have attached some documents that you might find useful.

Perhaps you might let me know if you are happy for the status quo to endure - or if you intend to investigate this matter further I'd be obliged if you'd allow me to tell my readers.

Mark Baker has today followed up on Detective Sergeant McAlpine's work in interviewing the AWU's auditors. 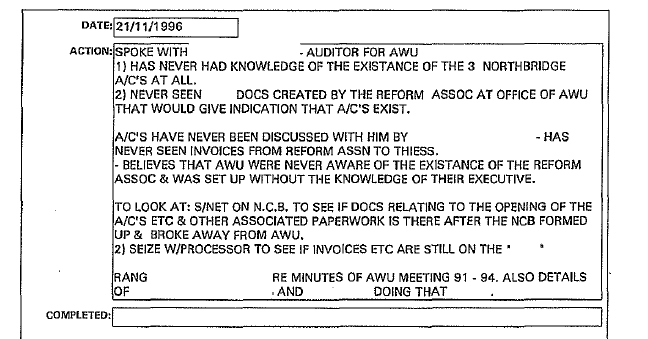