UPDATED - We need this now more than ever.   Imagine Ian Cambridge's shock at the discovery 4 months later of the AWU-Workplace Reform Association.   Then try to imagine his shock last year when Julia Gillard's admissions made in September, 1995 (4 months before this submission) were made public!

The mid-1990s was a torrid time in Australia.   We were pulling out of the recession we had to have and those monstrous 18% interest rates that bedevilled so many families.

Tariff walls were down, assets like Qantas and Comm Bank were being sold, Telstra was being considered for sale, competition was being introduced into sacred cow industries like telecommunications - there was a hell of a lot of change.

Against that broad backdrop, the AWU and FIME were merging.   I think there are a few truisms in business, one of them is that there is no such thing as a merger.   It's always a takeover by one of the parties.   In this case Bill Ludwig the old shearer from Queensland and his interests were very much calling the shots.

I really feel for Ian Cambridge in reading about his reaction to the bit-by-bit discovery of the scandal and the extent of corruption in the union .   Cambridge makes many references in this letter to the fact that small bits of information were coming to light - but that he had a real belief that larger scale underlying corruption was afoot.   How right he was.

Cambridge would have known about the close relationship between Bill Ludwig and Bill's man in Melbourne Bruce Wilson.   Remember that Bill and Bruce had been on a joint ticket to control the AWU.   You will also have read Julia Gillard's statement that the AWU-WRA was set up as a union slush fund to finance the election campaigns of certain union officials.

In due course some judicial process or other will hear evidence about where the bags of cash (or to be completely accurate, a certain backpack used to transport cash) were delivered.  The September 1993 urgent withdrawl of $50,000 cash from the AWU-WRA account was sufficiently notable for the memory of the event to be very clear in the mind of those who were there.   But Cambridge knew none of that when he wrote this letter.

I believe that Ian Cambridge was motivated by a genuine desire to see the right thing done.   I think he was sincere, untainted and zealous in his search for the truth.

By late 1995 Ian Cambridge was so perturbed by the absence of clarity, the lies, the poor response from authorities and the clear suspicion  of a cover-up that he decided that only a full judicial enquiry into his own union could clear the air.   I don't see that call as in any way motivated by factional rivalries or any desire to get even - it seems to me to be motivated by a genuine love for his union and a clear understanding of the pernicious damage corruption was doing to it.

I have agonised a bit over publishing this letter - whether it's in the interests of truth and fairness to re-print it without redaction or not.   I've decided to print it in full with no names removed.   The letter is a snapshot of a point in time.   It reflects a January 1996 understanding of what was going on in the union.   It is not reflective of a complete picture.

Keep in mind that the primary vehicle for The AWU Sandal was the AWU-WRA.   The false Power of Attorney, the correspondence with the WA Corporate Affairs Commissioner, knowledge about the property purchase at Fitzroy - none of that was known to Cambridge when he wrote this letter.   All of those important matters were concealed from the AWU by people who knew about them but remained silent.   You can understand Wilson saying nothing, but nothing can excuse Gillard's silence to her client or the silence of the Slater and Gordon partners.

Cambridge was in Sydney and the bulk of the scandal took place in Melbourne.   In this letter Cambridge refers to the $6,500 expense reimbursement claim that Bob Kernohan was paid by Wilson out of one of the tainted accounts.   I have re-printed Bob's complete explanation about that matter, including his statement to police (subject to the penalties of perjury) elsewhere on this blog.   I believe Kernohan completely, I have found him to be a person of truth.

Ian Cambridge was supported in his call for a Royal Commission by the Attorney General knifed by Gillard, Robert McClelland.   Mr McClelland has not recanted his support.

Ian Cambridge did accept a position offered to him by the Carr Labor Government as a Commissioner of the NSW Industrial Relations Commission.   Who would have knocked it back?   A judicial appointment, independent of the requirement to toe any party line, independent of government and protected from improper influence by the doctrine of our separation of powers.

The person I feel for in posting this is Kernohan.   Bob wasn't given a great job with a title and a pension.   Bob was offered a safe Labor seat, the seat of Melton in the Victorian Parliament.   But Bob knew the price of that was silence about the corruption and Bob wouldn't pay that price.   God bless you Bob and you think about your little grandson mate and how proud he will be of his granddad. 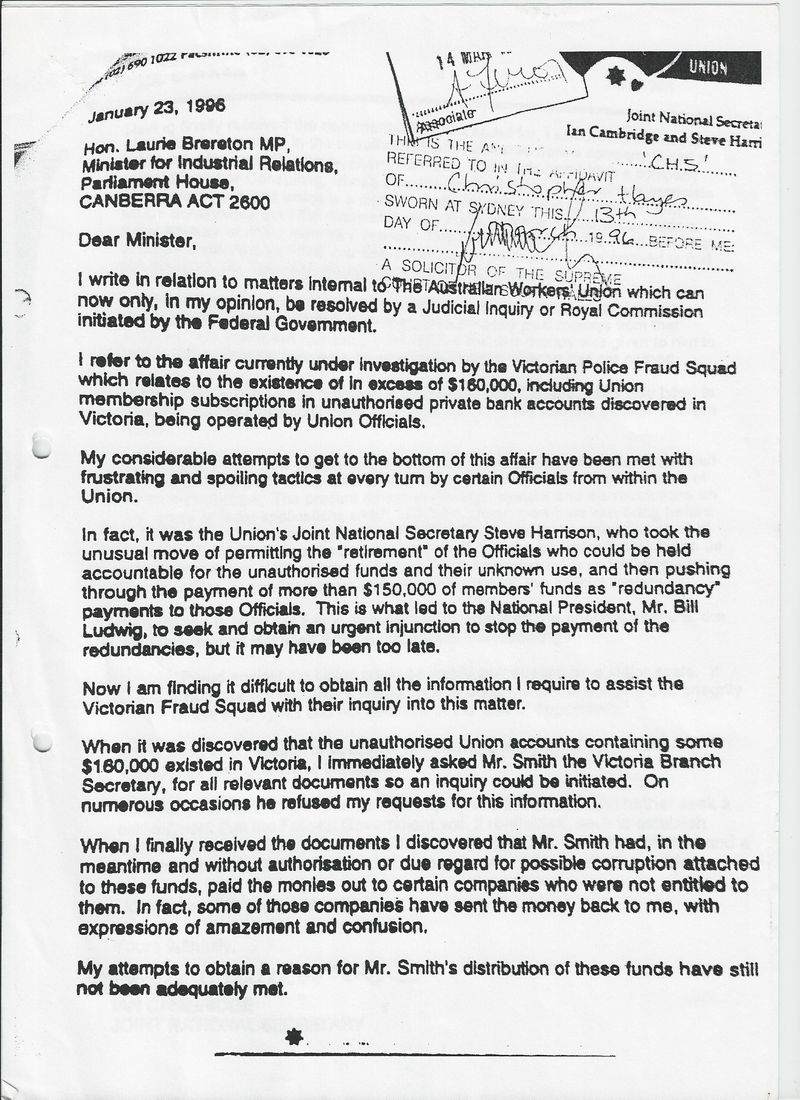 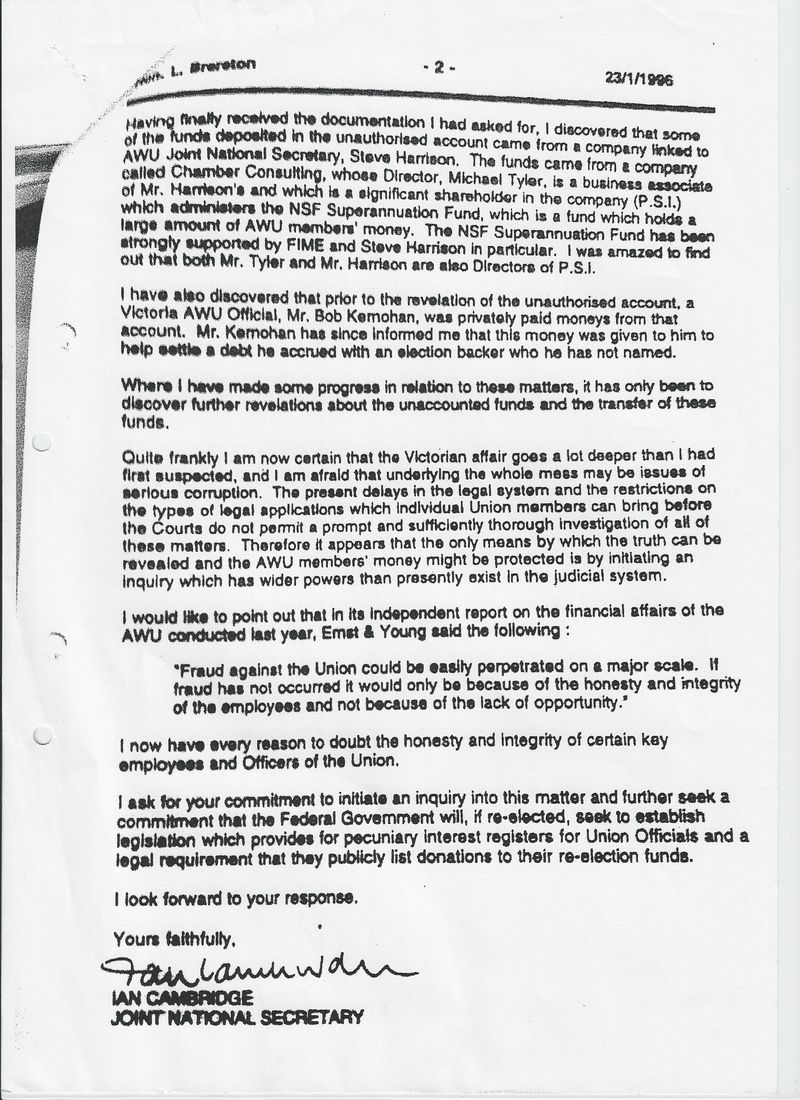 UPDATED - We need this now more than ever.   Imagine Ian Cambridge's shock at the discovery 4 months later of the AWU-Workplace Reform Association.   Then try to imagine his shock last year when Julia Gillard's admissions made in September, 1995 (4 months before this submission) were made public!