There's Tony the tradie and Tony the minister in the Bourke/Burke clan at parliament house.

I phoned Tony Burke the minister's electorate office this morning and spoke with Sarah who said that she is aware of the other Tony Bourke at parliament house.   Sarah passed me on to Angela in Tony's Canberra office.   Angela was great too - she passed me on to the Parliament House switchboard - and they put me through to Tony's phone.

Tony is not a Minister of the Crown.   Tony's a tradie who keeps Parliament House running.   And g'day to Tony's colleague Graham who I had a lovely chat with this morning.   Tony Bourke the tradie is sometimes bemused as he receives briefings intended for the Minister - and his passwords have been reset after his encounter with the ABC.

Were you like Tony the parliamentary tradie?   Did you send your details in to this ABC website? 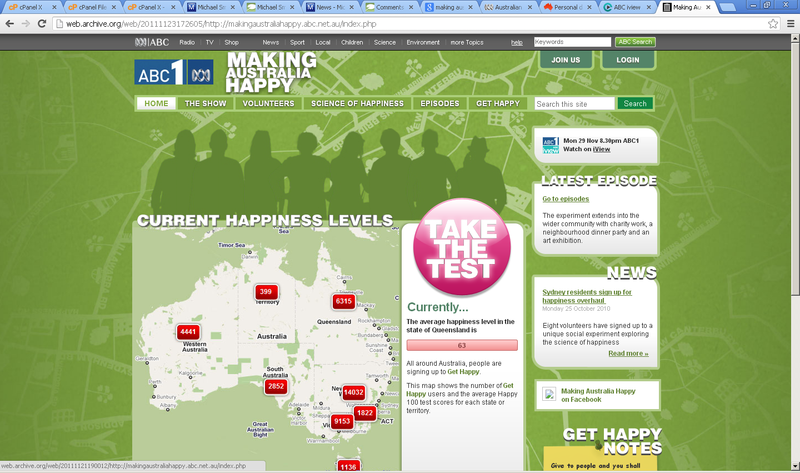 I have learned more tonight about hacking and data-base management than in all the previous reading I've done on the matter.

Risky.biz is reporting that the ABC's website was hacked in 2011 and the unauthorised incursion into ABC systems was not picked up.

This is going to be a very serious matter for the ABC and a source of ribbing for at least one Minister of the Crown.

Phil of Canberra is a regular on our blog and something of a genius.

Phil's note to us all is below -  if you have a regular word as your password anywhere - go out and change it tonight.   I hope that the Bourke household is busily doing that now.

I took a copy of the hackers dump from the (redacted) pastebin and crossloaded into (redacted) this evening.

I wanted to have a look at the mix and quality of the passwords.  I sort of do this whenever there is a decent sized dump (and the ABC hacking involves about 50,000).  I consult / contract in IT security.

In general, a hashed password can't be cracked.  However, when you look at a large list of them, you notice that many of the hashes are the same.  In other words, if the hashes are the same, the passwords are the same.
For example, the dump contains about 30 instances of the password "possum".  There are about 280 with the password "happiness".  Over the years, hacker types have created large lookup databases of hashes with the matching password.  There are a range of web sites out there (google [REDACTED] for examples) where you can paste in a hash ad it will return the matching password if known.  Some of these sites know tens of millions of hashes.  Common words like "parliament" are easily found.

THE HASH TAG FOR PARLIAMENT WAS REDACTED by us

Go and buy the Daily Telegraph newspaper right now. Go down the paper-shop. It's the Rooty Hill show! 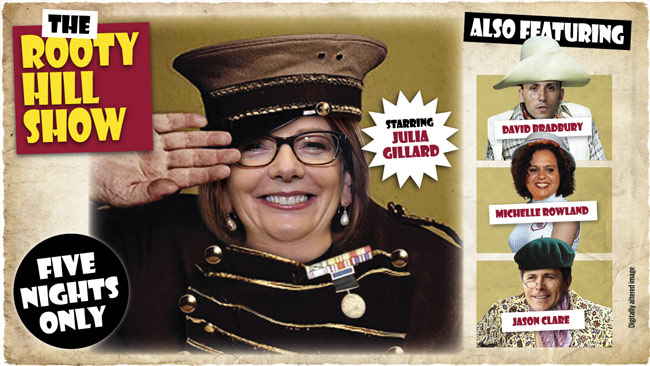 This was lifted by me from www.dailytelegraph.com.au - you should go and buy their paper.

We need a bit of research please team - who has the contracts with the immigration department - who gets the billions?

If I was motivated by profit and strong cash flows I would gravitate as close as possible to the Federal Government's Immigration Minister.

He is bound by the government's policy stuff-ups to spending billions of dollars in ways that are difficult to control.   Every smart operator with half-way decent connections knows it.

Contractors can charge what they want.   The government is weak, the service providers strong in this relationship.

Could someone (hopefully a few) have a look at who has the contracts, what they provide, how much they get - all that sort of detail.

I've got a fair bit on the plate this morning - and I know you will have the answers.

Transfield is mentioned in this story

A PRIVATE company that billeted dozens of asylum-seekers in student accommodation at two Sydney universities has terminated its contract with the Red Cross in the wake of an alleged sexual assault on a female student.

Campus Living Villages, a wholly owned subsidiary of infrastructure giant Transfield Holdings, had been providing temporary accommodation for the refugees on campus at Macquarie University and the University of Western Sydney.

There's no more money for palliative care? Then cut something else. You horrible, heartless reprobates. 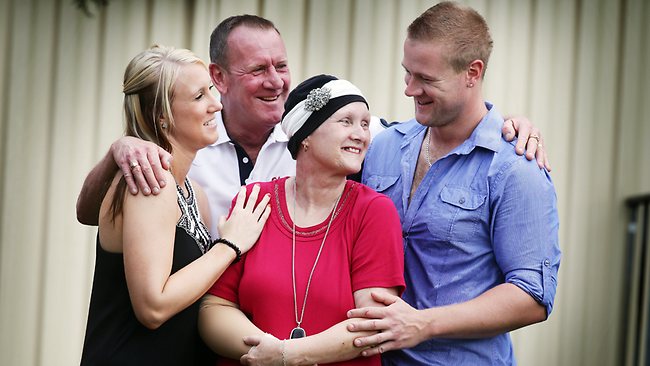 This is Debra McKenzie with her husband Graham, daughter Brooke and her boy Scott - the photo was taken by Nick Gibson of News Limited for Sue Dunlevy's story on the Gillard Government's decision.

Who is the person from the Federal Government who will visit the homes of suffering families to tell them that a decision has been made to stop funding the $500 million Palliative Care program.

It stops in July.   Unless you get active and tell your Member of Parliament that you are not going to cop it.

This is Peter Dutton, the Liberal Party MP who is the Shadow Health Minister, he'll be the Health Minister in an Abbott Government.   I spoke with him this morning when he was at an airport. 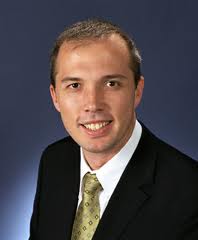 This is what happens when you get your priorities wrong.   These things should be funded first -then if there's money left over for nice-to-haves fine, spend on that.

But to dress up the nonsense of the $50,000,000,000.00 NBN as money being spent to improve health care is disgraceful.   What's the NBN going to do, connect a needle with morphine in your house?

This story was first published in Canda's www.cbc.ca you can read more here

The head of Mexico's powerful teachers' union was arrested at an airport near Mexico City Tuesday for alleged embezzlement, with federal officials accusing her of using union funds to pay for plastic surgery, to buy a house in San Diego and even to pay her bill at Neiman Marcus.

Attorney General Jesus Murillo Karam said that Elba Esther Gordillo, who has led the 1.5 million-member National Union of Education Workers for 23 years, was detained in Toluca on charges that she embezzled 2 billion pesos (about $160 million US) from union funds. 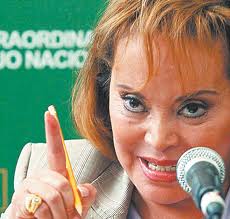 Gordillo, a colorful woman long seen as a kingmaker and power-behind-the-scenes in Mexican politics, was flown to the Attorney General's hangar in the Mexico City airport, where she asked to be checked by a doctor, Murillo told Milenio television.

Murillo said that Gordillo, 68, was in good health and awaiting transfer to appear before a judge. Two other people were also arrested but they were not named.

You may recall Ms Gillard's official response to Hedley Thomas's request for documents under FOI about work done in her department in managing the AWU Scandal and its fallout.

We covered the story here and here.

Well Hedley's originating application, having been knocked back by Gillard et al is now off to the Information Commissioner.

Paul Fletcher MP has already been down this path.   He sought information from Ms Gillard's office under FOI and like Hedley was knocked back.   He went to the Information Commissioner and he won.

Gillard and her staff know that the documents will be released ultimately.   This is all about stalling and coming up with legalistic excuses - something Gillard excels at. 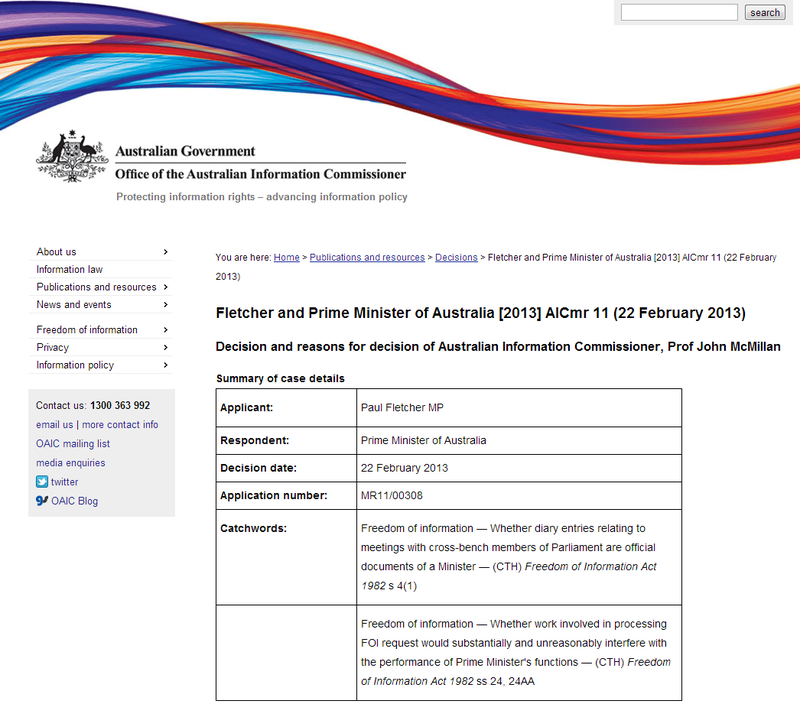 An insight into the election campaign from Labor

Lots of focus on social media and other digital communications for this election on both sides of politics.   Expect to see plenty of campaigns imported from the US I should think. 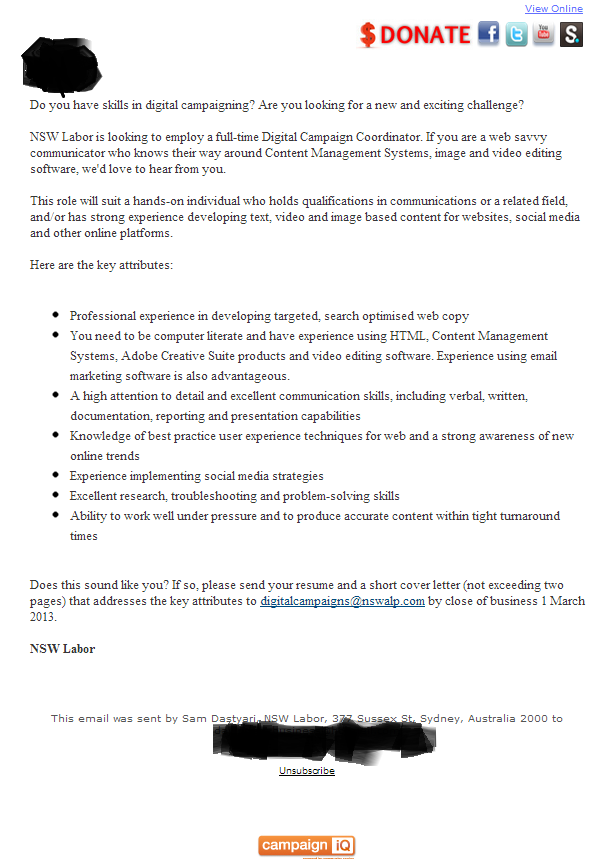 This is the twitter account of the person(s) taking responsibility for the ABC website hacking.   The Geert Wilders link is explicity given as the reason for the hack - and that statement was included with the dump of the ABC's data on a hackers website.   It could only have come from the hackers. 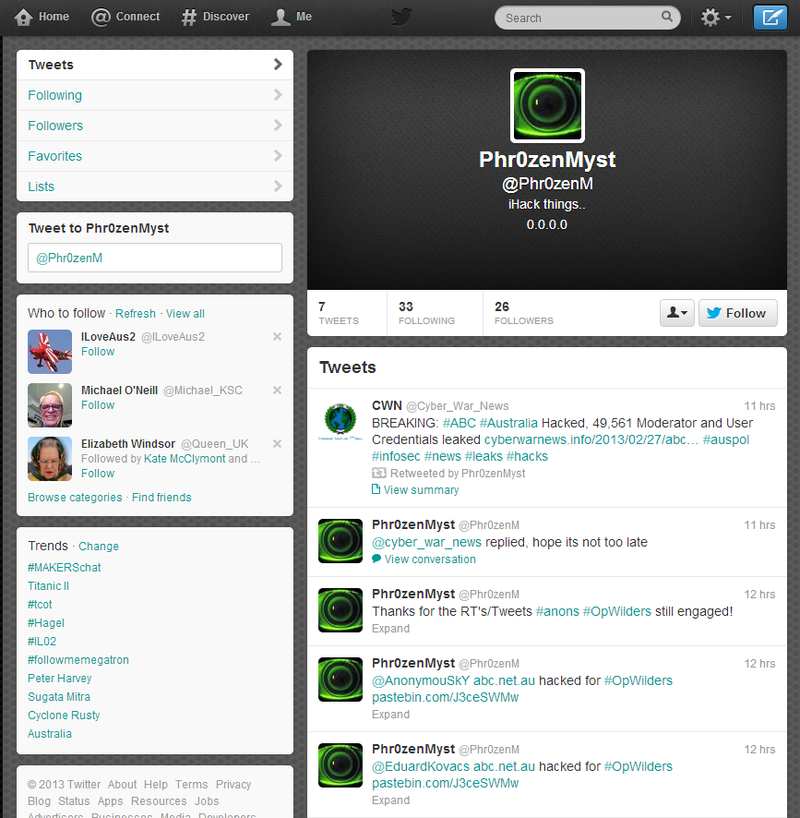 Other websites are showing the account details for people whose information was stored at the ABC.   I hope authorities are moving quickly to shut them down.

But it's chilling that a group or a person would do such a thing as this simply because the ABC's Lateline program interviewed the politician Geert Wilders.

I would like to think that media organisations in Australia would harden their resolve to support free speech and to make sure that time is found for Geert Wilders to  be interviewed again.   But having worked in the industry I fear that the safe, easy route is the route most often travelled.

Sadly that means that this operation with the #opwilders tag will have been a success.   The people who did it will get what they want.   And we're all a little diminished by that.

I hope I'm wrong, but even our government has been happy to appease violent, threatening behaviour and to make life difficult for the peaceful Wilders because it's  the easy way out. 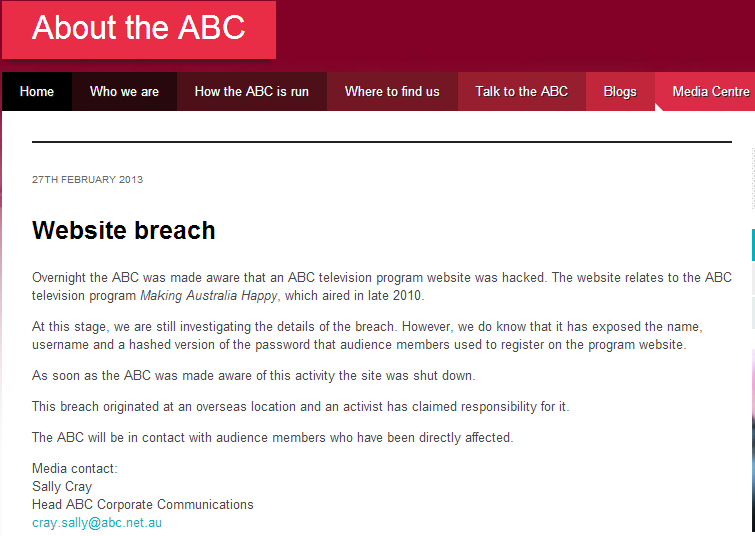 The Australian newspaper report is a bit more concerning.

THE personal details of almost 50,000 internet users have been exposed online after the ABC's main website was hacked.

A subdomain of abc.net.au was infiltrated early on Wednesday morning and the passwords, usernames, email addresses, location and postcodes of people who'd made comments on the site were posted on the internet.

the AAP/Australian report goes on to say

Mr Wilders was interviewed by Lateline during his recent visit to Australia.

NSW resident Tim Gresham told News Ltd he was horrified to learn his personal details had been exposed.

The details were published along with 49,561 other ABC website users' data, on a website linked to Anonymous.

"They're asking a lot of people some very intimate stuff on that website, so these hackers have got some fairly intimate information on a number of people if they've managed to hack that website. This is big."

I've been unable to find the twitter account for Phr0zenMyst - who knows if it's the hacker or some idle gossip.

A SRI Lankan asylum-seeker charged with indecently assaulting a woman in her university accommodation allegedly tried to get into another student's room within minutes of the attack.

Court documents say Daxchan Selvarajah, 21, entered a unit in Culloden Road at Macquarie University about 3.30am AEDT last Thursday and put his hand down the pyjama pants of a 20-year-old female student.

Police say the woman awoke and screamed, and her attacker fled.

Selvarajah was arrested yesterday at Railway Square in Sydney's CBD and charged with two counts of aggravated entering a dwelling with intent to commit indecent assault and one count of indecent assault.

In the same 10-minute time frame as the attack on the student, the accused also attempted to enter the unit next door with the same intent, court documents allege.

"He knew that there were persons present within the said dwelling place," the charge sheet states.

Selvarajah chose not to appear when his matter was mentioned briefly in Central Local Court today.

He did not apply for bail, which was formally refused.

read on at The Australian