Avoiding persecution through the best of modern surgical and cosmetic techniques

Would have made for some difficult moments on the boat trip, arriving 13 July 2013a

And you have to wonder how you could keep these steak-knives intact. 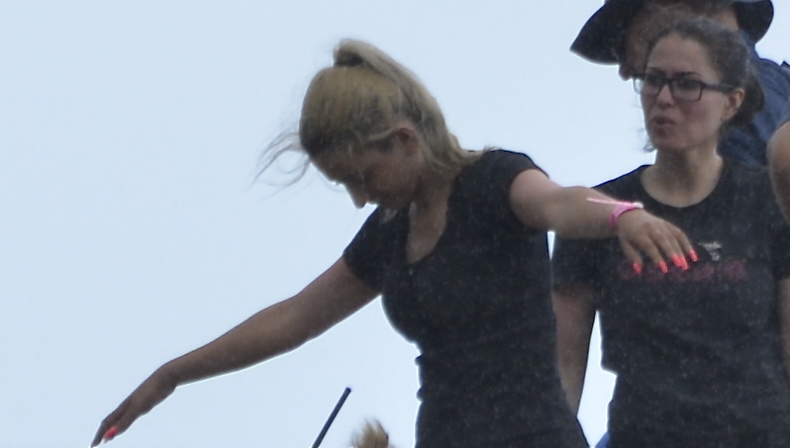 A few flights, a few flight plans, paid for with free money I suppose.

Thanks to reader GE for showing us what the Manus Island shuffle looks like in flights to the end of last week:

I am sure there are many more aircraft involved, but these were three government and two other airlines planes I found involved in the Manus shuffle last week and looks like its still going.

It also clearly shows that there was a shuffle out of Curtin to make way for the seekers from Manus.

Cost of charter is a really good question, I would think you would be looking around $8,000 an hour, rule of thumb.

What people do not sometimes realise is charters also involve relocation costs.

A good example of this is below (at the bottom of this post). 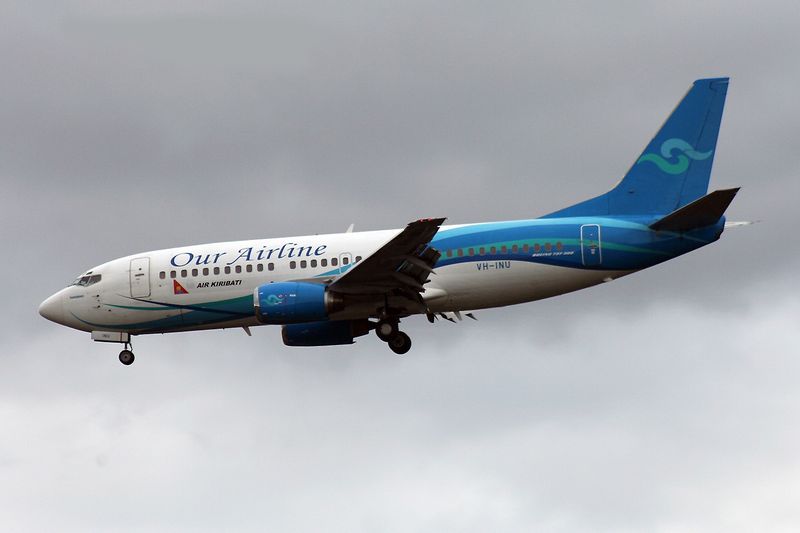 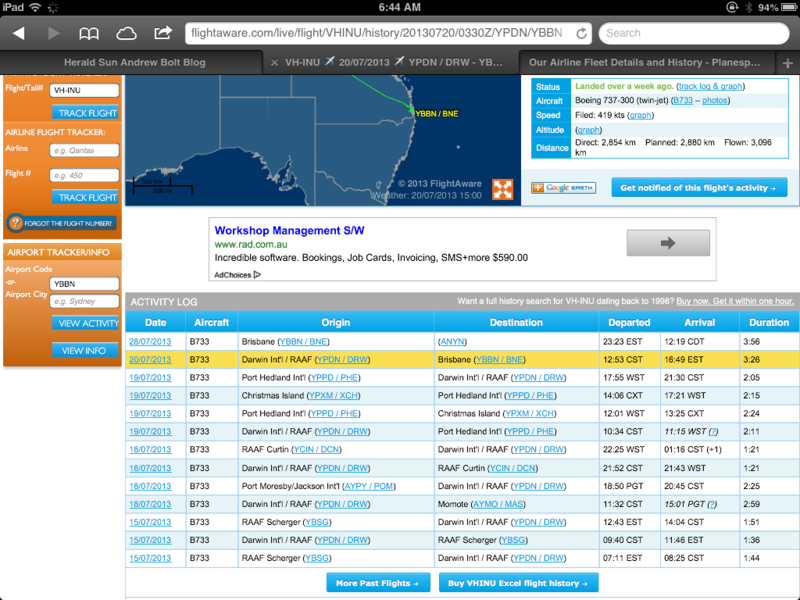 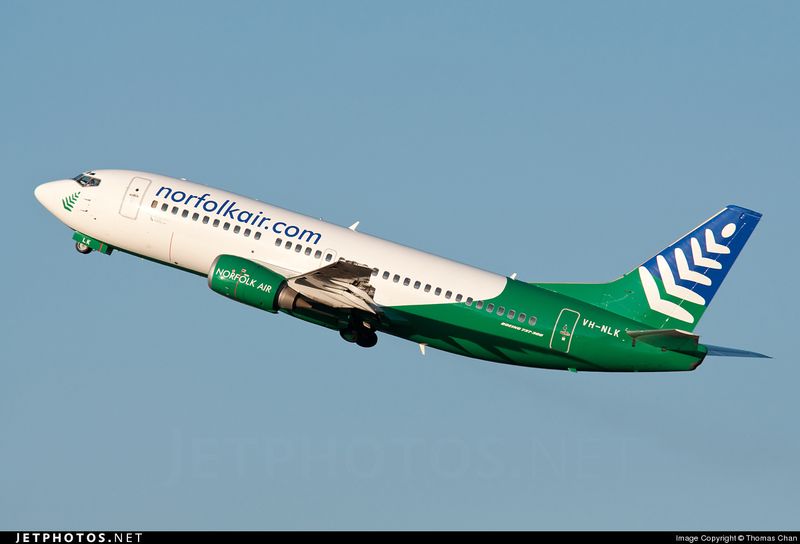 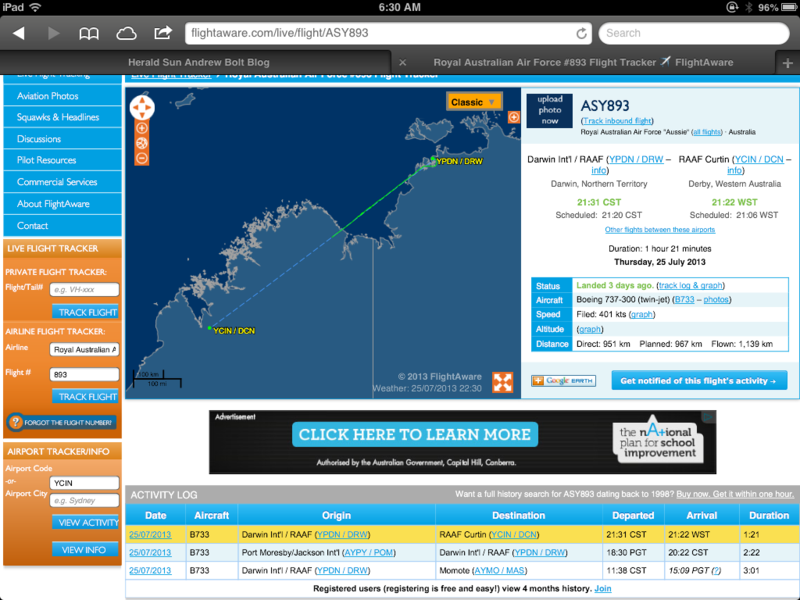 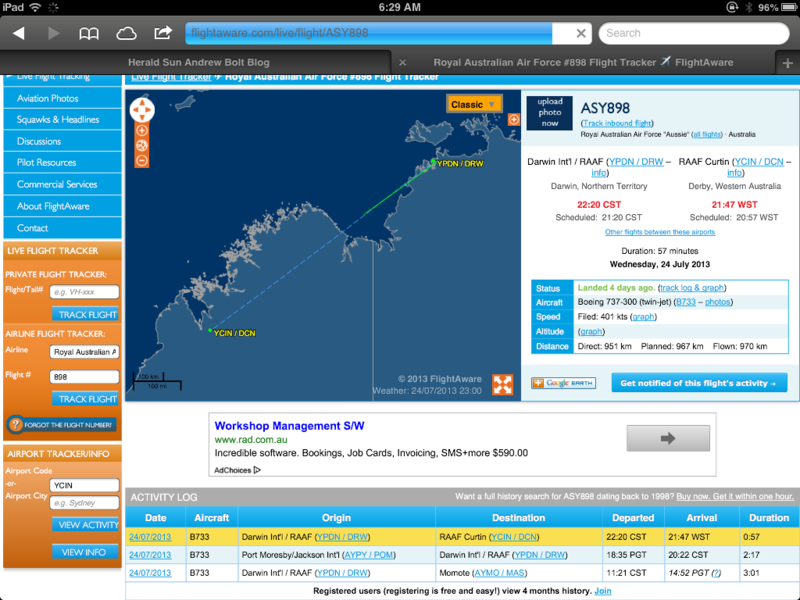 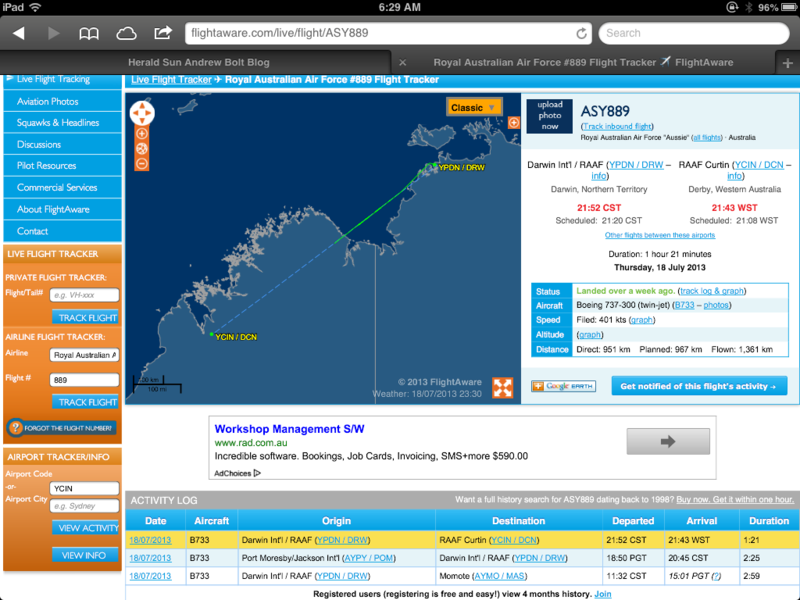 And I think you get the idea.

Reader GE goes on to explain some of the crazy costs - for example look at the Cocos to Christmas Island flight on 9 July last year listed below for more than $300,000.00

Reason for this most probably charter has originated in say Brisbane or Sydney .

The government either just don't care about cost, or are just commercially illiterate, there would be a heap of reliable charter aircraft in and around Singapore just a stones throw from Christmas Island compared with east coast Australia.

The waste in the shuffle is unbelievable.

We laughed about this recently at a lunch, Cocos Christmas Island now holds the record for highest air fare anywhere in the world, transferring a handful of seekers at these rates makes any first class fare look like throw away change.

I sit here wondering how we can be so wasteful and stupid financially as a nation. 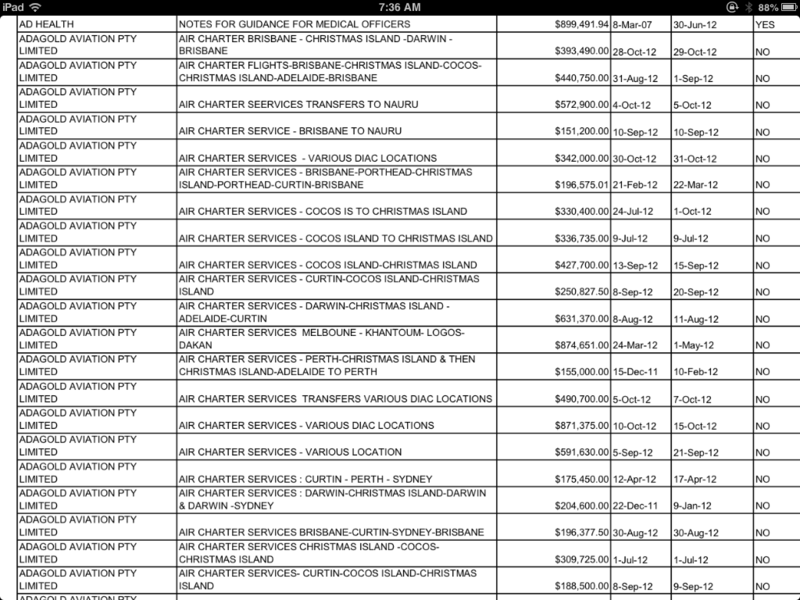 Stepping in with temporary borrowings in March, 2009. 5 budgets since then temporary PM.

Thanks to Truth Will Out for tracking down this clip of Prime Time Shit Storm Rudd.

The Budget is RS, but did you see that guy swear?  I swear he's just a great regular guy!   And the big story is that he swore!   We're lucky to have him.

On 8 August, 2013 we mark 5 years since The Rudd abolition of Temporary Protection Visas

On 8 August, 2008, The Rudd abolished temporary protection visas, "All current and future applicants for protection in Australia are eligible for the grant of a Permanent Protection Visa..."

What a nice guy.   Get here and it's open slather for the rest of the family and lifetime benefits in Australia.

Here is the Australian Parliamentary Library Report "Boat Arrivals since 1976"

Here are the raw numbers 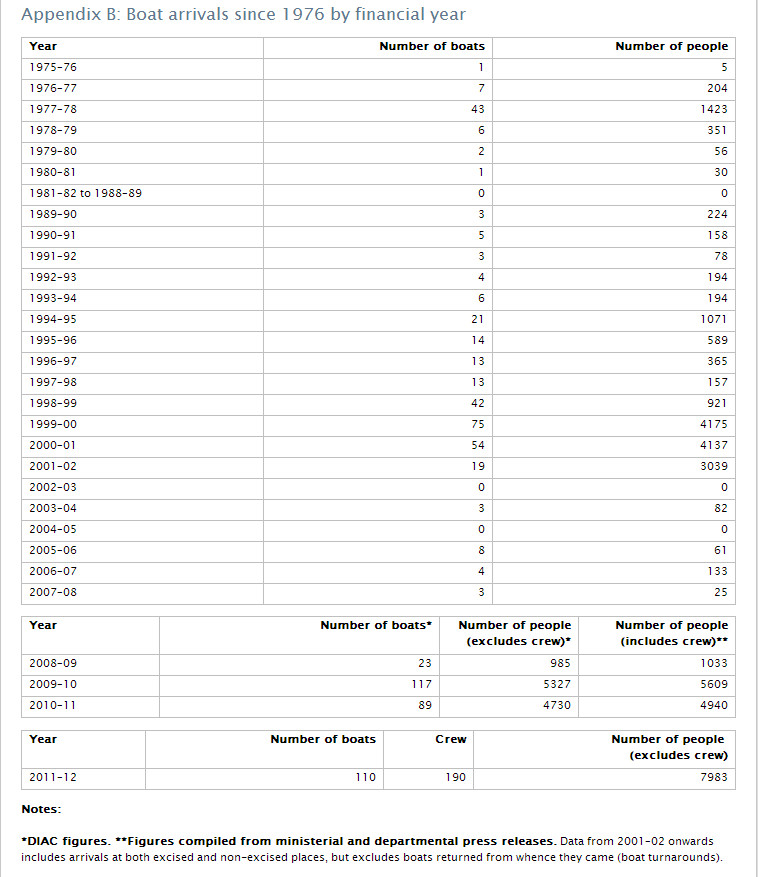 Now Rudd tells the world that

"Arriving in Australia by boat means:

He also says that being sent to Papua New Guinea includes "women and children".

Both are bulltish.  No wonder people smugglers love him, he's created a $450M industry for them.

This is from me at 4BC a few weeks after The Rudd's August, 2008 changes.   I quote Indonesia's Director General of  Immigration who said the policy would give more opportunity for people smugglers and Peter Faris QC, former head of the National Crime Authority.

You should have listened Kevin. 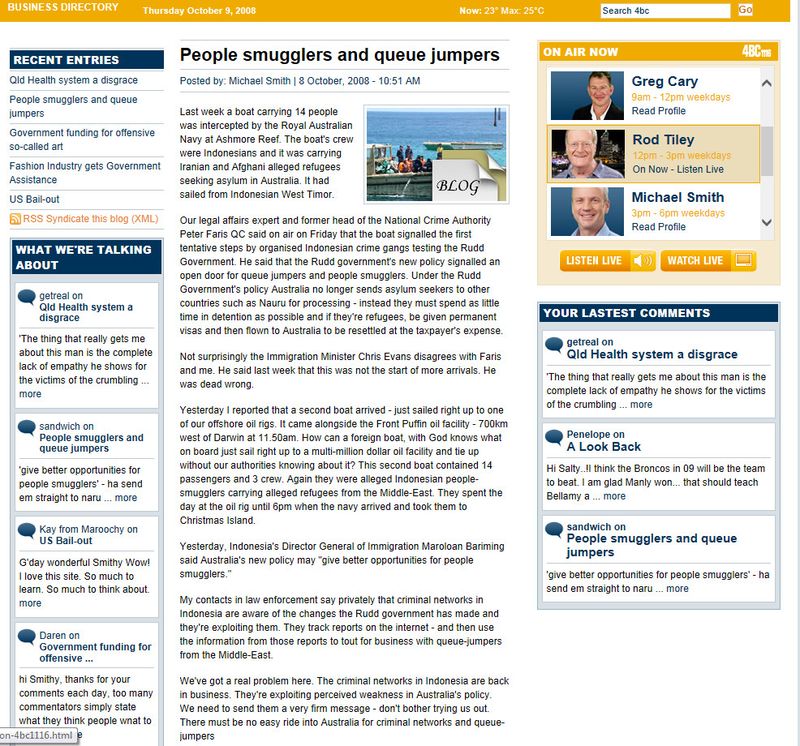 Another industry kills 1,300 people at sea and hardly a peep.

AT least five birds have been contaminated in an oil spill at the Port of Brisbane - four pelicans and one cormorant.

Transport Minister Scott Emerson said it was believed between five and 10 tonnes of heavy oil had been spilled and it could take up to a week to clean up.

Wildlife carer Hammy Forrest said the contaminated birds had not yet been retrieved but it appeared they were heavily covered in oil.

"It's quite challenging,'' she said.

"Everyone's trying to sort out what oil it is but we can't do anything without Environment Department approval so we're just waiting to go."

Authorities are investigating which vessel is to blame.

"About 1400 meters along the wharf has been affected.

"It may take, to completely clean it up, about a week."

The environment department has been called as well to help stricken wildlife.

"We have had sightings already of pelicans being affected by the oil," Mr Emerson said.

"There was an added complication today with the arrival into the port of the USS George Washington but given that the oil is contained to the wharf itself, not into the channel that won't be impacted."

A diagnosis of HIV or progression to the active AIDS used to be considered a terminal disease which would often lead to an early death.   But that was very long time ago.

Here's the latest advice I could find about HIV/AIDS, this is from the UK

The prognosis of people with HIV is getting better

Most HIV doctors are now hopeful that the right treatment and care can mean that a person with HIV in the UK will live a more or less normal lifespan.

Researchers calculated in 2008 that modern HIV treatment would mean that many people with HIV will be able to live well into their 70s.

There is growing agreement that most people with HIV in the UK will die with HIV not of HIV.

Why is prognosis improving?

The simple answer is that potent HIV treatment became available. The amount of illness and death caused by HIV has fallen dramatically since powerful combinations of anti-HIV drugs became available in 1996.

Doctors have also become skilled at treating the infections that people with HIV can be vulnerable to.

I was surprised firstly to hear that in Sydney we need a specialist legal centre for people living with HIV/AIDS, and secondly to hear that it doesn't have enough money and thus it needs the extra grant that Plibersek and Dreyfuss are going to drop over today.

This isn't medical funding, or research for a cure.   It's free legal services.

Here's what the HIV/AIDS Legal Centre says about itself

We also provide community legal education and advocate for the reform of laws and the legal system in areas that affect people living with HIV.

Minister for the Public Service and Integrity

Attorney-General Mark Dreyfus QC and the Minister for Health and Medical Research and Member for Sydney Tanya Plibersek will be in Sydney TODAY and will announce new funding for the HIV/AIDS Legal Centre.

THE small white coffin, silhouetted by the rising sun, was being loaded on to a plane bound for the mainland. The great southern land of opportunity and hope would now provide nothing but a final resting place for Abdul, an Anzac Day baby, drowned off Christmas Island, now buried in suburban Melbourne.

His Afghan parents survived, to seek asylum. But at such a cost; a cruel and intolerable cost. Colin Murty's astonishingly sad photograph for The Australian provoked emotional reactions across the nation. The image encapsulated the national imperative to stop the flow of asylum boats to our Indian Ocean waters. For all the matters of sovereignty and immigration integrity, the safety issue takes precedence - the human toll.

Leaving aside the critical debate about which major party has the most comprehensive plan and strongest resolve to again put an end to the people-smuggling trade, we need to confront those who continue to argue that this crisis is confected. Refugee advocates such as Julian Burnside QC argue we should not be concerned about the number of arrivals. Even in the midst of the current crisis, he told Chris Kenny on Sky News that politicians are seeking to create "fear" over asylum-seekers. Pressed on whether any number would create a problem, he suggested a rethink might be appropriate if annual arrivals reached 50,000. As arbitrary as that may seem, it is also not far-fetched; with more than 1000 arrivals in the past week, we are already seeing a rate that could top that figure.

Mr Burnside and others who preach a "let them come" mantra, insist that there is no "queue". Yet in vast refugee camps in Sudan, Somalia, Jordan and elsewhere, not a single penniless refugee can hope for a place in our humanitarian quota because it is filled by boat arrivals. Under current arrangements the greatest barrier for refugees hoping to come here is not our lack of generosity or tough laws, or even a dangerous ocean journey; it is the price of a people-smuggler's fare. Ultimately, this is the equation that can be changed by effective border controls. Even with our generous quota, only a small share of the world's refugees can settle here. But let them be chosen by the UNHCR and our officials - on the basis of need - rather than be filtered by the smugglers' black market before risking leaky boats and a perilous sea.

Little coffins that should never have been used

It's taken me until now to post Colin Murty's photo of a little 10 week old boy being loaded into the cargo hold of an aeroplane inside his little coffin.

My heart goes out to the man who got that job.

It's a difficult topic often avoided.   I should be ashamed of myself for writing "difficult topic", it's not what I meant, so I'll try again.   When your policy change kills a little baby who would otherwise be happily drinking his mum's breast milk you should fix things up so it can't happen again.  Mr Rudd. 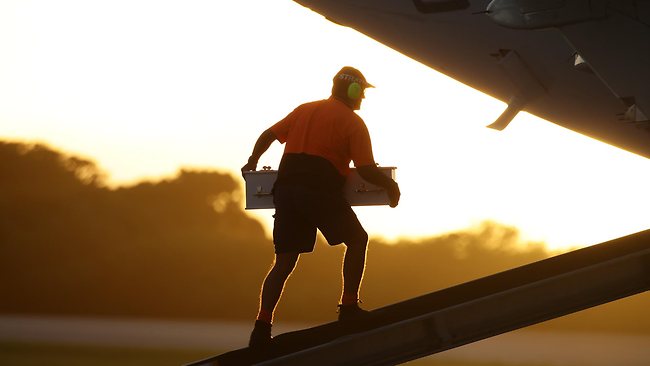 I carried my daughter Lucy in a white coffin on my lap in the back seat of our car, while her Uncle Duncan drove Lucy, her mum and me from our church in Pomona to the crematorium.

Some things stay with you for life.   There's that word again.   Life.

Fijian Foreign Minister Ratu Inoke Kubuabola today delivered a thoughtful speech in Brisbane about The Rudd plan to re-settle large numbers of Muslims amongst the Christian Melanesian population to our north.

The Rudd plan is contingent on PNG removing 7 reservations is holds on the UNHCR convention on refugees, including access to education, housing, freedom of movement and other rights.   But the reservation will be lifted only for the people Australia sends to PNG and thus those rights and other subsidised goods and services will only be available to an obvious and chosen few.

Ratu Kubuabola spoke at The 20th Australia Fiji Business Forum in Brisbane today and the ABC recorded some of his speech.

Jock Tamson Bairns with a wonderful world that should be