A very senior policeman and I were once talking about the fact that some crooks can do horrendous, immoral things and remain beyond the reach of the criminal law.

I just joined in a bit, "yeah mate, rotten how we as a community haven't worked out how to respond to that etc etc etc".

It was quite a lesson.   There is an important role for the media in telling us what powerful people are really up to, particularly when we're paying for it.

That's what I tried to do with the Craig Thomson HSU expenses matter, which led into the Gillard AWU matter.  That's before I was pulled off the air and given an ultimatum - I could only return to my show as a broadcaster on the condition I drop the AWU story.

The helpful management at 2UE who suspended me from the air also helped me early on in the process by banning me from exposure to the danger of attending the 2UE premises.  It was a quick-onset danger that developed, because the ban was unexpected and effective immediately.  Just like the ban from my email and other files at the same time.

So my family photos and other things on my desk and in the drawers and cabinets had to look after themselves for quite a while.   Anything that looked remotely like it was associated with my work, I kissed good bye.

Eventually, lawyers negotiated a time that was safe for me to visit the basement carpark one night, a place that was found to be free of dangers.   A couple of the station's engineers had been given the things from my office that were found to be harmless and safe for me to have back.

Amongst the things that were judged to be too dangerous to return to me was the radio station's submission to the Walkley Award panel for my work on the Craig Thomson enquiry.

Would you believe it just fell off a truck and right into my lap?   Here's a copy of the CD to prove it. 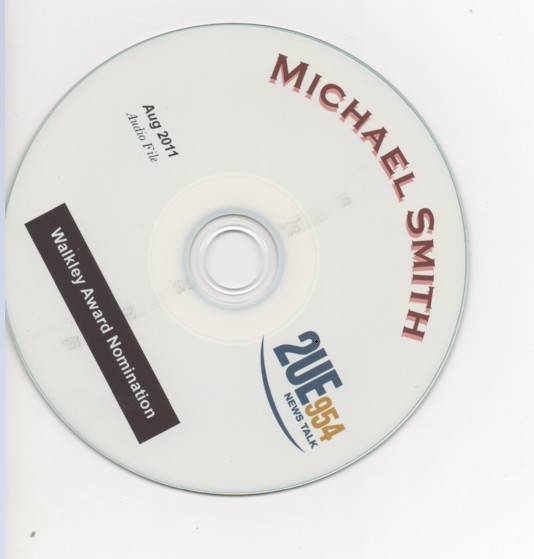 (I didn't win.   A story about a uni student who set up an internet camera to stream video of him having consexual sex with another uni student won)

So, let's go back (I'll put this stuff up bit by bit, there's more to come)

And here's the email from Craig to the parliamentary colleagues.

I am writing to you as you may have seen reports in the Fairfax press regarding my defamation action. The article was totally inaccurate and wrong. The facts are as follows:

2. The HSU settled on a confidential basis with me some six months ago. Whilst it was a confidential settlement it was one that I was very happy with and as a consequence withdrew my legal action;

3. Over a month ago I reached a confidential agreement with Fairfax. This was reported in the press and the agreement filed in court as a settlement of my matters and again the legal matters where withdrawn. As with the HSU settlement I was very happy with the outcome.

4. An AEC investigation cleared me of the allegations raised by Fairfax regarding electoral spending

5. I have always strenuously denied the allegations made against me and I continue to do so.

It is clear that Fairfax have both defamed me again and breached and misrepresented a confidential deed that settled the matter between me and Fairfax. I have now been referred this matter again to my lawyers.

I thank you for your continued support in this matter and hope this corrects the grossly inaccurate and misleading reporting in the Fairfax media.

During the week of 18 to 22 July I just kept at it, day by day repeating my assertions about Mr Thomson's conduct, assertions that would have been defamatory if not true. Around that time a Wyong city councillor Greg Best criticised the Federal Government in a local ABC radio interview.   Craig Thomson responded with a text to Cr Best that said, "Bye bye jobs incubator".

Doug Eaton, the mayor of Wyong, told the Herald he sent a letter to ICAC late yesterday following an exchange last week between Mr Thomson and a local councillor, Greg Best.

Mr Best and Mr Eaton - both independents - had grown unhappy at the amount of time it was taking to establish a GP super clinic in Wyong.

The clinic had been promised by the federal government four years ago and the matter was discussed at a council meeting on Thursday last week.

Mr Best was unhappy not only that the clinic was taking a long time to establish but also that it was unlikely to be as large as originally promised.

On local radio on Friday morning, Mr Best was critical of the situation, although he said he did not single out Mr Thomson for criticism.

At 6.10am, after his comments had aired, Mr Best received a text message from Mr Thomson saying ''bye bye job incubator''.

The incubator is another federal government promise - a small business incubator and youth training centre in Wyong, where youth unemployment is high. The centre, once built, will be run by Central Coast Group Training, of which Mr Best is the general manager and Mr Eaton is the chairman.

So, on Friday, 22 July, I interviewed the Mayor of Wyong, Cr Doug Eaton.

So to recap - 22 July I interviewed the Mayor of Wyong Doug Eaton on 2UE.   Both Doug and I mentioned Gillard's name in the same sentence as  Thomson's name.   Doug said, "Gillard should sack him."

Later that Friday afternoon, our office phone rang and I answered it.  It was Craig Thomson.   I have no doubt that after the Media Monitors report arrived at PM Gillard's office, Craig was told to shut this line of enquiry by me on 2UE up.   That's what he tried to do on the phone.

Craig was keen to stay off the record.  I made it clear I wanted him on the record.   We agreed that he would be on the show for an interview the following Monday, 25 July 2013.

Here are the two texts from my old phone. 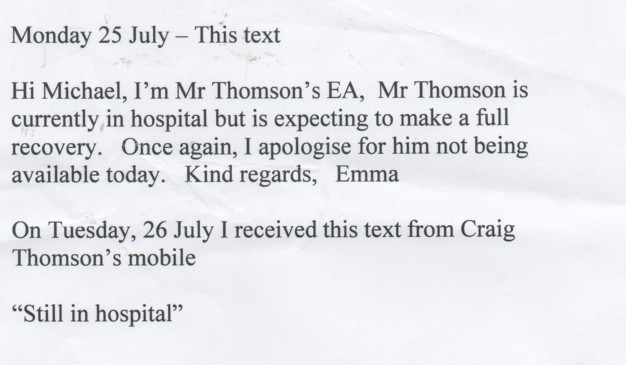 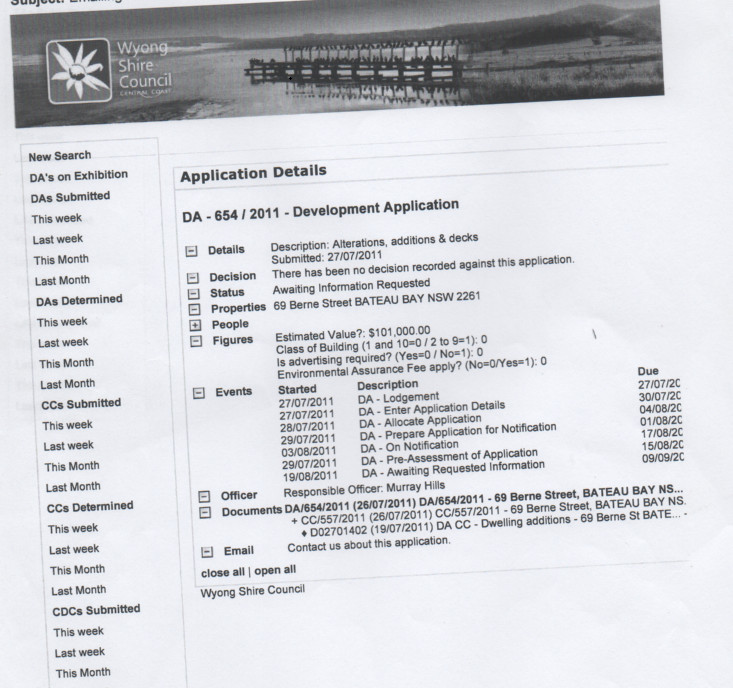 Just to summarise, on Friday 22 July I speak with the local Mayor and we criticise Craig Thomson and Julia Gillard.  Gillard was the new element.  That same day Thomson rings me to speak "confidentially".  I tell him we'll do only do it on the air.  We agree to do it Monday 25 July but his appendix needed taking out or something.

Which is a bit funny for a guy who needed the Labor Party to bail him out to the tune of about $350,000 in his own legal bills.

The Labor Party members who had just handed over $90,000 a few weeks before Craig's DA would have been thrilled.

LABOR paid more than $90,000 of MP Craig Thomson's legal bills and gave him a loan on top because if he had failed to pay and been declared bankrupt, it would have brought down the Gillard Government.

Sources said the party caved in because if he were bankrupt he would be ineligible to remain in Parliament, putting the minority Gillard Government at risk.

"We paid because if he hadn't paid his bills he'd be bankrupt," a senior Sydney Labor source said.

NSW Labor gave Mr Thomson more than $40,000 for legal bills incurred when he started, and dropped, a defamation suit over allegations his former union credit card was used to procure the services of prostitutes.

But Labor sources confirmed the figure was actually more than $90,000, with tens of thousands more given in the form of a loan.

Asked if Prime Minister Julia Gillard or her office asked NSW Labor to pay his bills, a spokesman for Ms Gillard said the NSW branch was responsible for its own accounts.

About three months ago, just before Mr Thomson dropped his defamation suit against Fairfax, he is said to have met NSW Labor's head office asking for money.

The settlement he made with Fairfax, which includes paying some of its legal bills, is confidential but sources claim it was up to $200,000.

A very senior policeman and I were once talking about the fact that some crooks can do horrendous, immoral things and remain beyond the reach of the criminal law.

I just joined in a bit, "yeah mate, rotten how we as a community haven't worked out how to respond to that etc etc etc".