This is the spoof video that put Shezanne Cassim, 29, of Minnesota USA in a Dubai jail

This is the video.   I can't see anything offensive in it.  Nothing particularly funny either.   But it's earned its maker a UAE jail cell since April this year.    Thanks to Extreme Centrist for finding it.

WASHINGTON – The U.S. State Department is closely monitoring the case of Shezanne “Shez” Cassim, a former Minnesota resident jailed in Abu Dhabi after making a video spoofing teen life in Dubai and uploading it to YouTube.

Officials from the U.S. Embassy in Abu Dhabi and the U.S. Consulate General in Dubai have visited Cassim regularly at the Al-Wathba prison and attended all his court hearings, a department spokesperson said.

Staff members have also worked to ensure that 29-year-old Cassim, whose parents still live in Woodbury, has been treated humanely while in prison, the spokesperson said.

“The U.S. Embassy and Consulate General have engaged with [United Arab Emirates] counterparts to urge a fair and expedient trial and judgment,” the spokesperson said.

“Mr. Cassim was incarcerated for five months before he was notified of the charges against him. … The U.S. government supports the right of individuals and groups to express their political opinions peacefully around the world, including in the UAE.”

A Sri Lanka-born U.S. citizen, Cassim has lived and worked in Dubai since he graduated from the University of Minnesota in 2006. Cassim was arrested in April and charged with violating a cyber crimes law. After spending two months in jail in Dubai, he was transferred to a maximum-security prison in Abu Dhabi in June.

Cassim is accused of threatening national security and, according to the London-based Emirates Center for Human Rights, is the first foreign resident arrested under tougher measures governing Internet use in the United Arab Emirates.

Cassim has entered a not guilty plea in court. The Supreme Court judge in the case has repeatedly denied bail requests and postponed several hearings.

The next court date is scheduled for mid-December, U.S. officials said.

Cassim’s Dubai-based attorney declined to comment. Cassim faces a prison term and up to a $272,000 fine in the case, said Rori Donaghy, director of the Emirates Center for Human Rights.

“The charges against him are as ludicrous as they are harsh,” Donaghy said, “and all defendants should be immediately released because posting a playful video about youth culture in no way endangers anyone’s state security.”

The United Arab Emirates Embassy in Washington, D.C., has not returned calls seeking comment on Cassim’s case. Officials there have deflected requests from members of Minnesota’s congressional delegation to release Cassim.

The 19-minute mock documentary, “Ultimate Combat System: The Deadly Satwa G’s,” was intended as a spoof on teenagers in Dubai who fashion themselves as thugs or gangsters. Cassim created and posted the video online in 2012.

The video shows combat training at the fictional “Satwa Combat School,” where students learn to throw sandals, strike opponents with a traditional head wrap and use cellphones and Twitter to summon help.

The YouTube account Cassim used to upload the video also features a blooper reel from the “Ultimate Combat System” shoot.

The case reflects a renewed crackdown on social media use in the region.

In its travel report for U.S. citizens visiting the United Arab Emirates, the State Department warns of arrests for information posted to YouTube and Twitter and cautions care about posts “that might be deemed to insult or challenge the local government.”

Your support for this website would be most welcome!

If you would like this website to continue your donation would be gratefully received.  Right about now would be extra good!

They want how much for that independent review we did? Tell 'em they're dreamin'.

How much would you expect to pay KPMG for an independent review of the Fair Work Investigation into Thomson and the HSU.

You have no idea?   Don't feel bad, neither did Bernadette O'Neill.

On 15 February 2011 she gave evidence to the Senate Estimates hearing in which she announced that KPMG had the job.

Her staff probably got a bit narky.   Here's a link to the complete Brief Ms O'Neill received about how badly she was outside procurement guidelines. 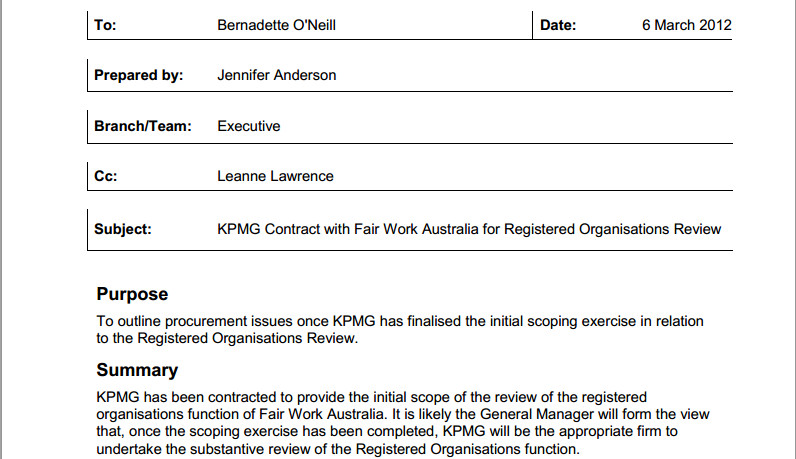 That document went on to say:

Weeks of negotiations and "scope creep" followed.   Handwritten notes made by Ms O'Neill in her work journal/diary - and released under FOI record this entry headed "KPMG Jeremy/Robin 2/5 (May)."

$480K Max apparently agreed with KPMG on 2 May. 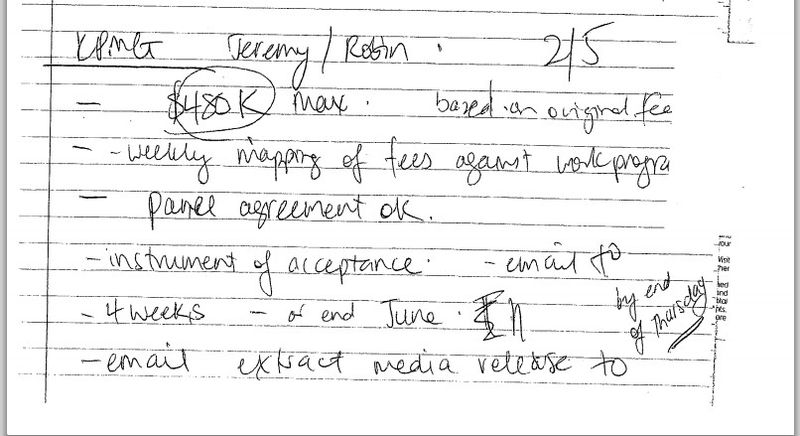 The actual Work Order or effective contract was signed by both parties on 10 May 2012.  Here it is: 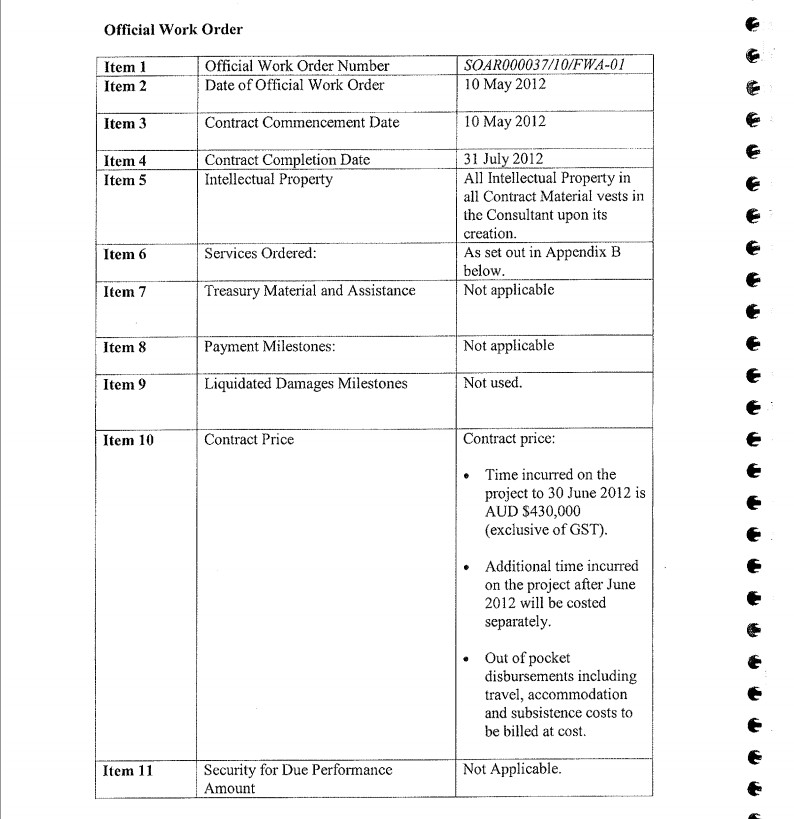 Which makes this evidence given to the Senate Committee in writing on 29 May 2012 inexplicable.

Here is the record showing the date the statement of answers to Senator Abetz's questions on notice was lodged with the committee - 29 May.

And here is the document in full.   Ms O'Neill bears responsibility for its accuracy. 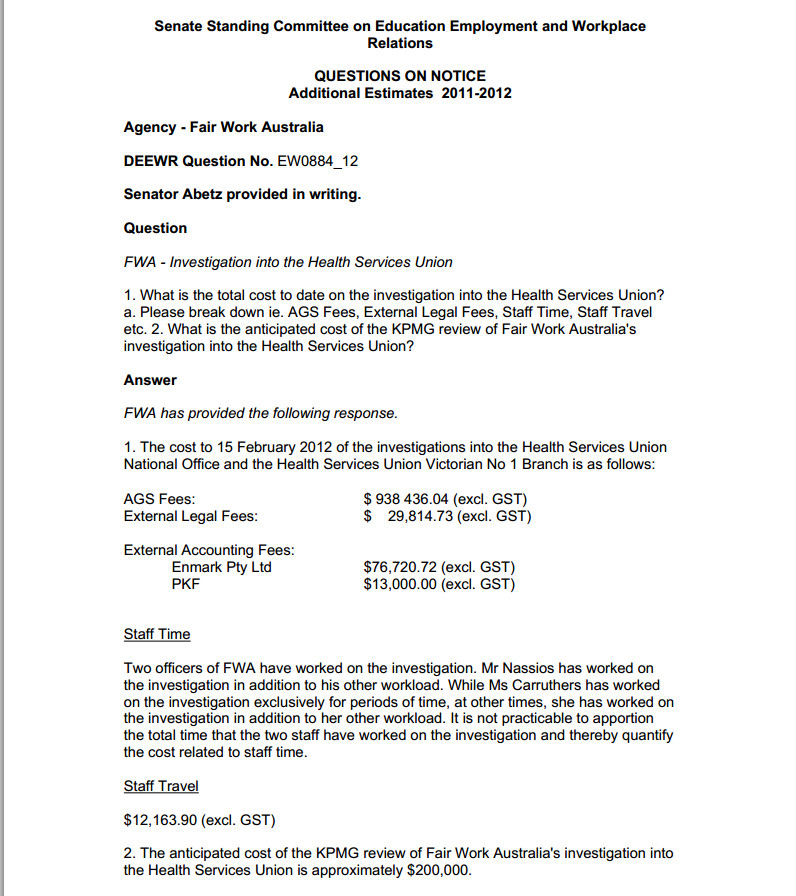 It does not seem an honest or prudent answer given that a contract for $430,000 was already in existence.

The Austender website entries for FWA and KPMG are not helpful - that in itself provides some insight into how far outside normal procurement guidelines this "deal" fell.

Given KPMG was recommended personally by Val Gostencnik and no tender was called for, this matter is screaming out for proper audit and inclusion in a judicial inquiry into the broader HSU/union related scandal.

Just so the depression isn't given a chance to settle in, let's leave the last word on cost analysis and contractual negotiations to Darryl Kerrigan.

The United Arab Emirates. An awful place to visit and you wouldn't want to live there.

News Limited websites carry this story today.  Be warned about the consequences of minor infractions of their way of life.

I don't know how the civilised nations of the world tolerate the various forms of barbarity that flow from Islamist Central.

AN AMERICAN man who works in the United Arab Emirates has been held in a maximum-security prison for months after posting a parody video about youth culture in Dubai, a rights group and family attorney said.

Shezanne Cassim, 29, of Woodbury, Minnesota, was arrested in April and charged with violating a 2012 cybercrimes law that boosts penalties for allegedly challenging authorities, attorney Susan Burns said. He was moved to a maximum-security prison in Abu Dhabi in June.

He's been accused of endangering national security, and is the first foreigner arrested under tougher measures governing internet use in the United Arab Emirates, according to the London-based Emirates Center for Human Rights.

Cassim has entered a not guilty plea in court, and has made a statement about his involvement in the video, which he created and posted online in 2012, said Cassim's brother, Shervon.

Katarina dropped me a couple of photos that I couldn't resist posting. 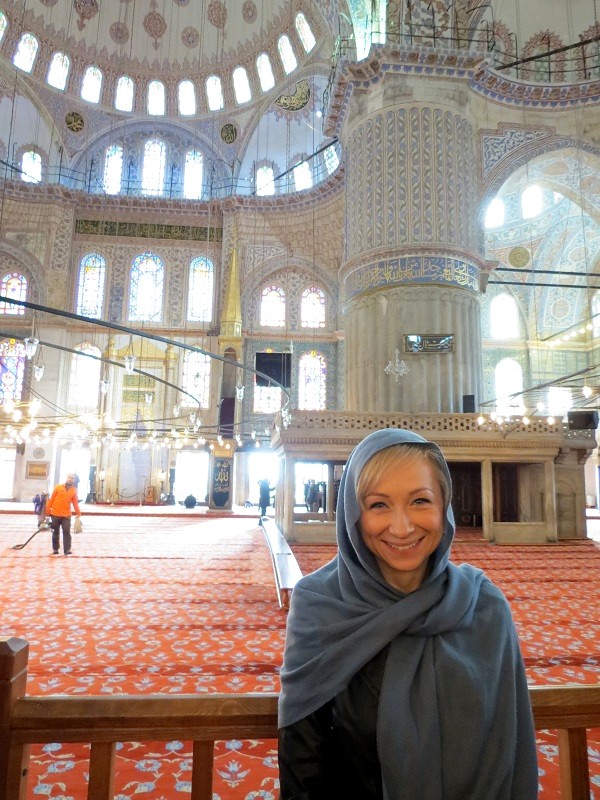 A beautiful photo of Heidi, Charlie and the new addition to the Jason Morrison tribe Oliver, one week old today 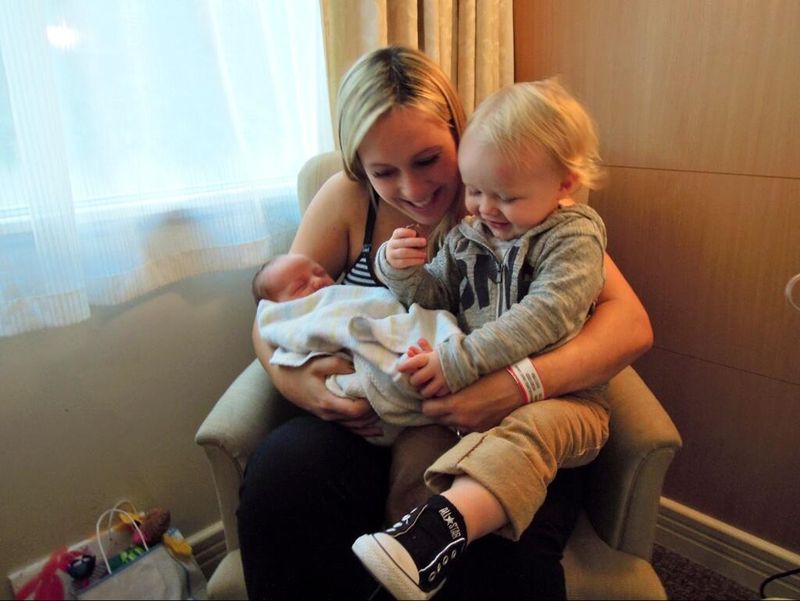 Our Right to Feel Safe.

I started on the radio in 2008.    Each month I was on the air I felt a growing unease amongst my listeners - and fear of becoming a victim of crime was at the heart of it.

It showed up in community outrage about piddling sentences and crazy bail and parole laws that saw too man serious offenders on the street.   It was reflected in government policies that prohibited police or other agencies from talking about gangs.   According to the Bligh Government there were no gangs - just occassional groups of "like-minded-individuals".

In early 2010 we decided to do something about it.  We hosted a forum with the Attorney General, Police Minister, Police Commissioner, Opposition Leader, Police Union, judges, magistrates and sundry other concerned people.   They had nowhere to go - and I was surprised by the vehemence and anger in the crowd.   A feeling that they simply weren't safe was very real for the people at the forum.

In the last 24 hours I've been asked for the details of the event by a government-agency in Queensland.   Rather than just send the stuff off to that agency, I thought I'd post it all here for anyone who's interested to come and have a look.

I get the sense that the time is ripe for something similar in Sydney right now - where the State Government's Attorney General seems to be more of a social worker than first law officer.

Here's a link to the petition we handed to the Attorney GeneralCameron Dick.

Here's 4BC's website from the event, archived at the Wayback Machine.

And this young mum was undoubtedly the star of the show.   Nicky was sitting quietly in the audience, then asked for the microphone to make her impromptu speech.  I've seldom heard so powerful a presentation in so brief a time.   The chastened Attorney General Cameron Dick spoke directly after Nicky. 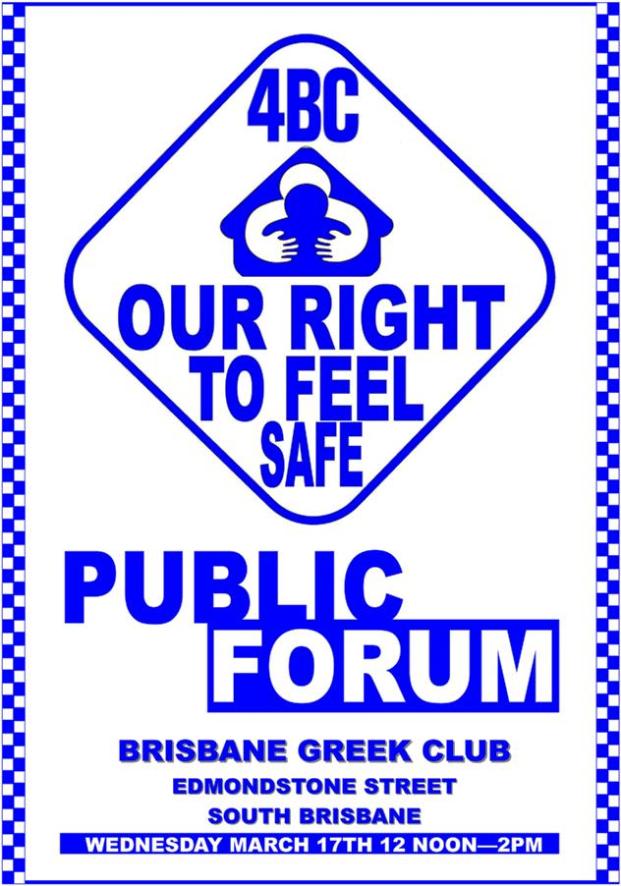 Did you miss the 4BC Our Right to Feel Safe forum, listen to the highlights here.

One of dad's best mates Pat Ginman put this video together.   It's a real insight into a now unrecognisable Australia.  Mum and dad's social circle was centred on the Rockdale Catholic Youth Organisation - they seem so innocent and naive looking back now.   A time of simple pleasures and powerful principles.

Aung san suu kyi is in Australia.   The stories above give you some sense of what she has been talking about while she's here.

This afternoon the story reproduced in part below was published on the Sydney Morning Herald's website.

Given the gravitas of the things that Aung san suu kyi has said while she's here, I thought it was a bit wierd to have the report about her speech centred on a relatively minor pronouncement that shows the lady's humility.   It's worth a comment, but as the central theme of the story?

My bewilderment lingered until I got to the quotes from Tony Abbott.   Then the Fairfax approach made sense.  So fixated on the slightest opportunity to criticise Tony Abbott in any way that the paper would forego the opportunity to report more meaningful statements to engineer the dig at Tony Abbott.

Suu Kyi: I am neither saint nor icon

The internationally celebrated leader of Myanmar's democracy movement, Aung San Suu Kyi, has declared she is neither saint nor icon.

Addressing the Lowy Institute for International Policy in Sydney on Thursday morning, the woman feted for enduring nearly two decades of house arrest at the hands of Myanmar's military rulers said she had always seen herself as a politician operating on the basis of "compromise based on principles".

Prime Minister Tony Abbott must not have been listening to Ms Suu Kyi's Lowy address, for later this afternoon he welcomed her as an "icon of democracy".

The power of words.