Jeff Kennett with some useful views on Qantas, media and Mark Latham

The ABC, Labor Mates and the Military

The Australian's Cut and Paste with a bit on the ABC, Labor Mates and their respect for our Military.

FRAN Kelly: The question of patriotism and politicisation of the military exploded in the federal parliament yesterday. Stephen Conroy lit the spark when he accused ... Lieutenant General Angus Campbell of being guilty of a political cover-up.

ONE thing I do want to make very clear here, though, I and the entire Labor Party respect the work of our defence forces.

KELLY: We just heard Bill Shorten ... sounding stronger than I think any of his parliamentary performances have sounded to date ... he condemned the, quote, sanctimonious finger-wagging, lecture-giving, sermonising, false patriotism where those opposite would seek to use the military as a stick to beat Labor about their head with ...

Channel Ten’s Paul Bongiorno: ... what I think Bill Shorten brought out today was, in fact, what we’ve got in Operation Sovereign Borders is a huge misapplication of our military ... there is no doubt that our military are being used in broader political purposes.

JULIA Gillard was shoring up Labor’s political defences in Darwin, piped on board a patrol boat commanded by a woman ... Along for the ride, David Bradbury, his western Sydney seat under siege from voters worried about refugees. A perfect picture opportunity for his election brochures.

PHOTO ops on warships with ministers do not equate to a ... policy.

Blame them both! Back to RN Breakfast, yesterday:

KELLY: I think it’s fair to say, though, there’s a culture of secrecy amongst our military, too, and it’s often criticised, our military won’t tell us things that other militaries in the same field of war will disclose to their citizens. So I think both cultures perhaps have elements of that ... the Coalition when in opposition ... did say a three-star general would be in control and ... there was concern that would mean the politicisation of the military. I think what you’re saying is that’s exactly what’s come to pass.

ONE thing I do want to make very clear here, though, I and the entire Labor Party respect the work of our defence forces.   Bill Shorten, February 2014.

Here is former PM Julia Gillard's respect for the Defence Forces on show in the 2010 Anzac Day Parade.   Note the zip-up green tracksuit top, and the red shoes and gloves. 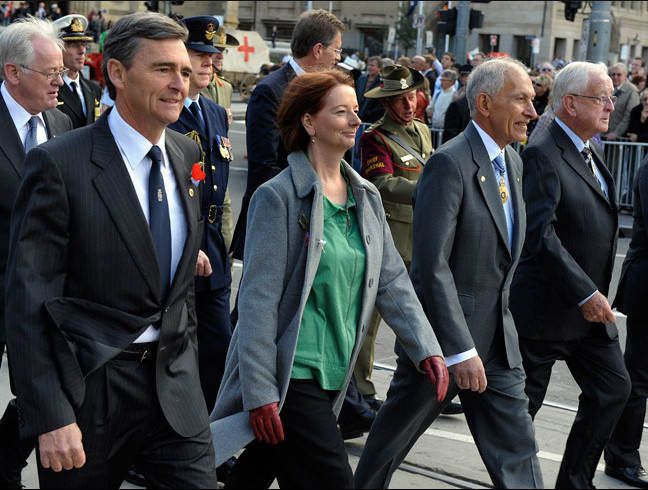 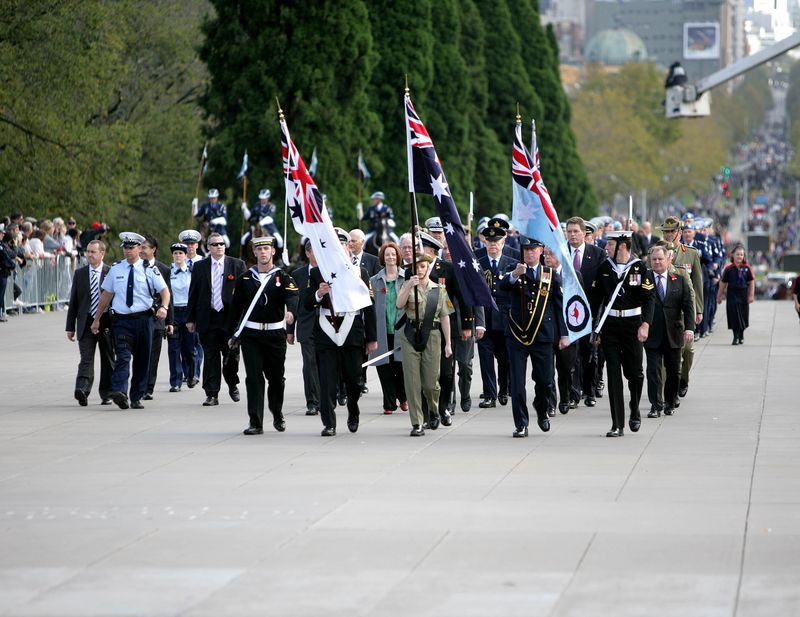 Regular readers of this site will have seen similar shots of the 2010 Anzac Day parade here . 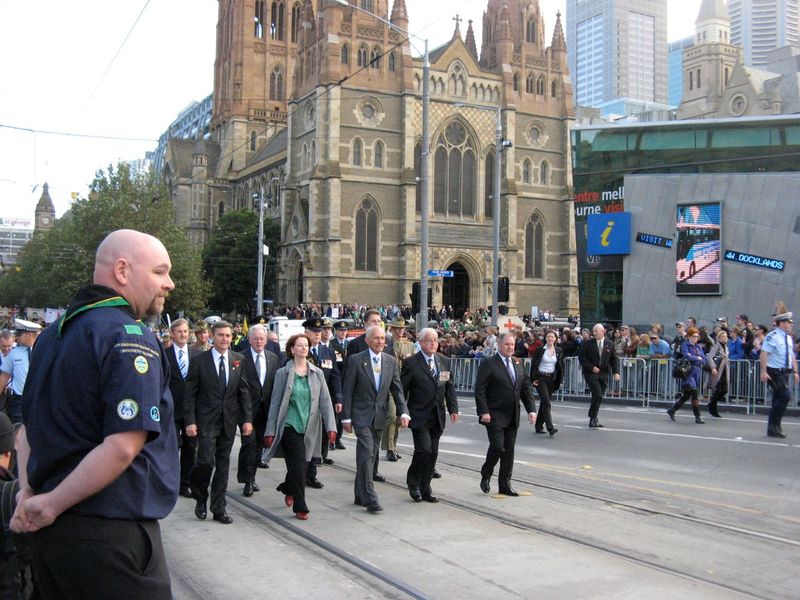 Many of our readers recalled the horrible protests against our returned men and serving soldiers, like me, in the Melbourne 1984 Anzac Day parade - reported here. 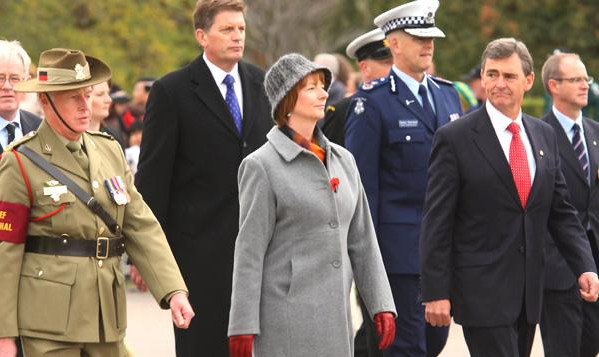 There's Ms Gillard with her mate and former boss John Brumby and his mate Simon Overland wearing the policeman's costume. 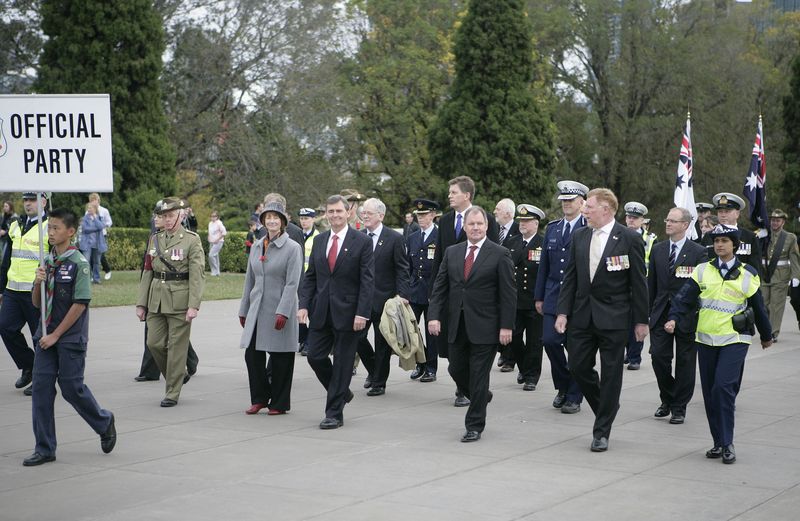 The RSL was sufficiently concerned about Ms Gillard's lack of respect for our dead to say this of her in 2009:

RSL state president David McLachlan said it was important to officially  honour the 60,000 Australians who lost their lives in World War I.

"I think as Australians we've got every right to expect that the acting prime  minister, if she's in Canberra, would be at the 11 o'clock service at the  Australian War Memorial," Mr McLachlan told Radio 3AW.

But our former PM's lack of respect for diggers was lost on the trip to China, where she found some good clothes to go out and see the People's Republic Army. 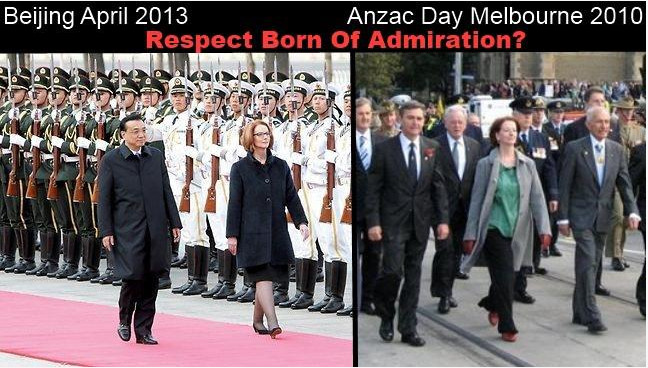 A land of milk and honey where correct thoughts are welcome

Mark Scott continues his funster life with the funsters from the ABC, untroubled by the yuckiness the rest of us have to deal with.

ABC managing director Mark Scott believes that repetition convinces. Three times in this week’s Senate estimates hearings, he lectured the good senators on the superiority of the ABC’s set of editorial guidelines, code of practice and complaints procedures.

“We have a more detailed and systematic process of independent review of audience complaints than exists anywhere else in Australian media,” he repeated.

This red herring, straining the truth, enabled him to deflect the senators’ questions about recent contentious broadcasts and news reports: the navy’s torture of asylum-seekers; the “sicko garbage” and smutty stuff of the New Year’s Eve broadcast; the vulgar Chris Kenny dog skit; and the unchecked damaging Media Watch statement on this newspaper’s finances.

It was an occasion when an observer could have wished for some of the brutal questioning of a Four Corners reporter.

But the senators were no match for the anodyne answers of Scott, who was at his condescending nicest. So he got away with assurances the ABC meant no disrespect to the navy; that next year’s New Year party might be different in tone and content; that Chris Mitchell (editor-in-chief of The Australian) can take his complaint to the Australian Communications and Media Authority if he is unhappy with the review under way of the Media Watch coverage.

As for Paul Barry, recalcitrant presenter of Media Watch, he corrects but continues to refuse to apologise for his mischievous reporting and Scott, ABC editor-in-chief, will let him get away with it.

Indeed, Scott signalled to the Senate committee that in future, Barry and others caught out in flagrant breaches of editorial practice will escape the ignominy of on-air correction or apology.

The ABC is planning to create a special place on its website to carry all corrections, clarifications and apologies - its equivalent of a newspaper “page two”, as Scott put it. He justified this as making them easier for the public to find, but those weasel words obscure the truth: this is intended as another brick in the ABC’s defensive wall.

The airline, the Emir, the Cigar Bar and party central. Qantas workers bloody lucky to have the AWU on their side.

Union corruption makes Bill sick to the stomach. That's why he's opposed to finding it.

Michael Williamson was the President of the Labor Party.   And a thief.   It rings a bit hollow when Bill Shorten says he's sickened by corruption in unions while resisting efforts to find it. 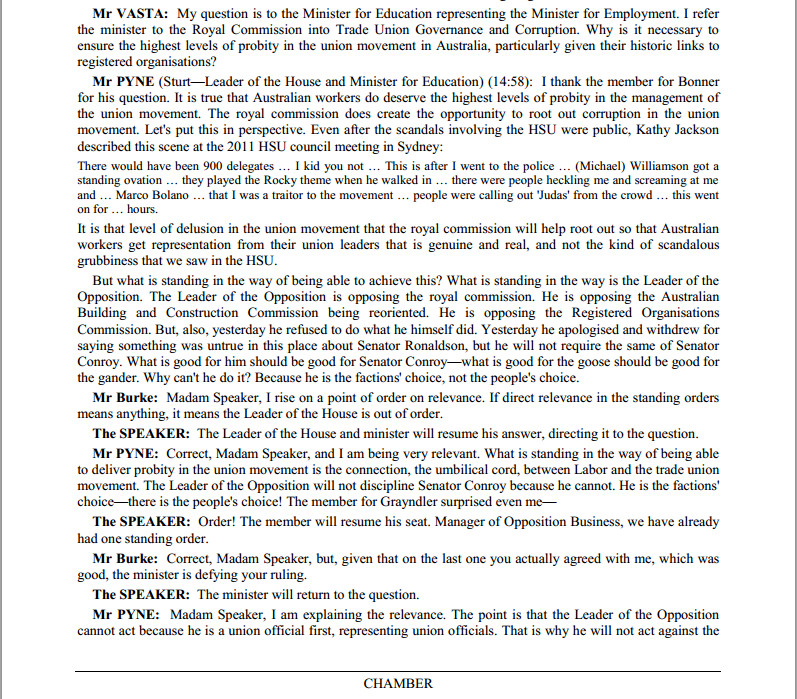 You may be more charitable than me.   Or perhaps you think differently.   But I cannot think of a single achievement for which Ms Roxon ought be favourably remembered during her time as Attorney General.   Maybe getting Peter Slipper in the back door at the Federal Court.

Here is the Victoria University's announcement.

The Honourable Nicola Roxon will become an Adjunct Professor within the College of Law and Justice at Victoria University.

Victoria University, Vice-Chancellor, Professor Peter Dawkins said, “I am delighted that Nicola Roxon will bring her many years of experience and her exemplary skill to a new role at the University.”

Nicola Roxon’s primary role will be Chair of the Sir Zelman Cowen Centre Advisory Board, working closely with the Centre’s Director and the Dean of the College of Law and Justice.

“Her experience in government, law and the health sector will be a big asset to the University, the College of Law and Justice, and the Sir Zelman Cowen Centre.”

Nicola Roxon said, “I'm excited to continue my close association with Victoria University and share its core mission of providing top quality education to a broader range of students.”

First elected to the federal seat of Gellibrand in 1998, She was a senior cabinet minister and held the complex portfolio of Minister for Health and Ageing for four years. She oversaw major reforms to the public hospital, primary care and preventative health systems.

A rainy day in Menai today - but the Rainbow Lorikeets brighten the place up! 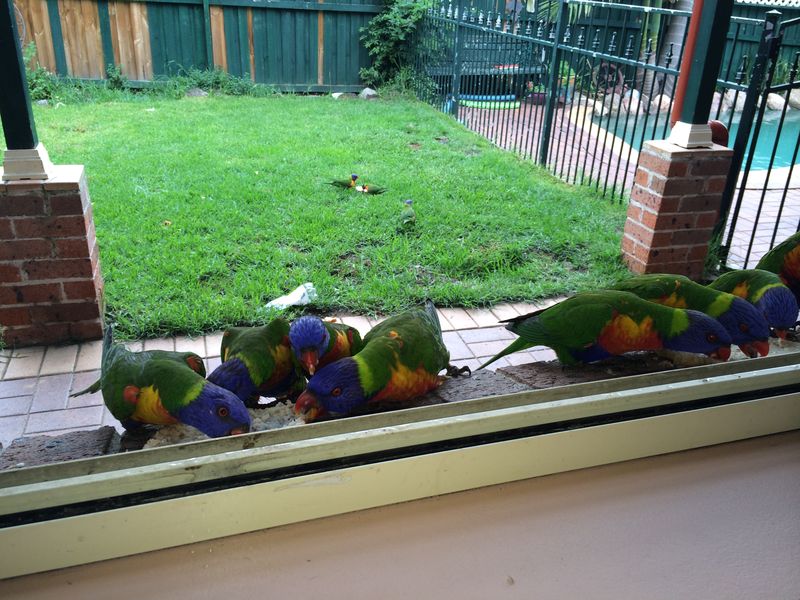 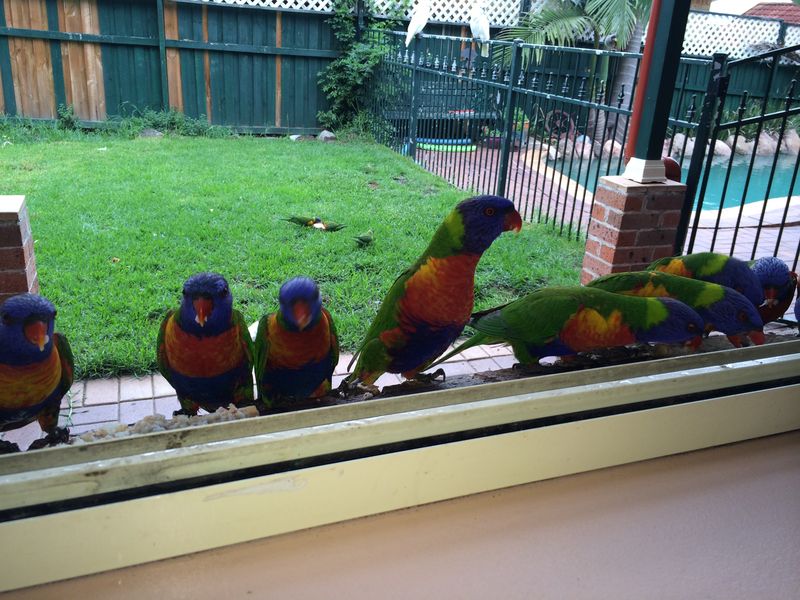 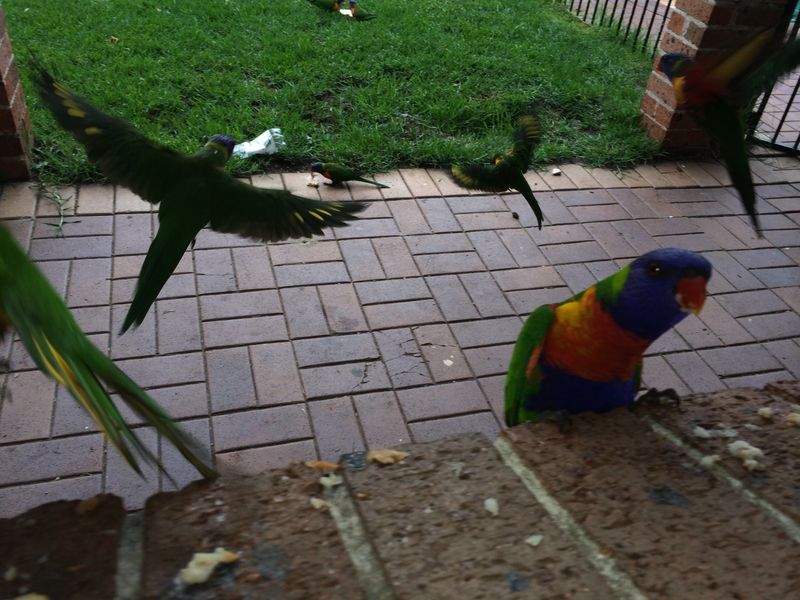 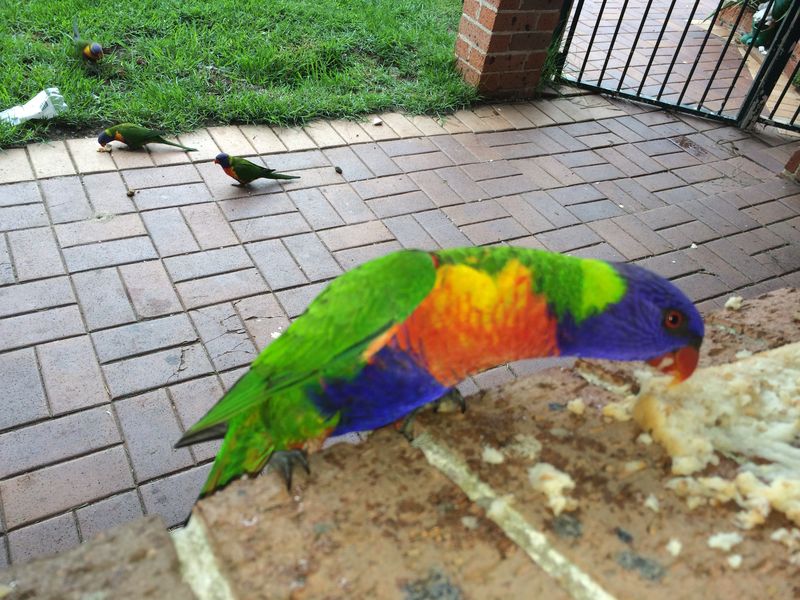 Mark Scott reckons the ABC is going through quite a painful journey, just like Qantas

Over the past few years the ABC was gifted money to create The Drum, the Fact-Checking Unit, more news journalists, more capex, more drama, more TV stations, much increased web presence and more fun stuff.   And that all came with enough money to pay mega-salaries for ABC funsters to do what they want.

Qantas, on the other hand, has to sell stuff.   If customers don't buy, Qantas gets no money.   Qantas has just sacked 5,000 very unhappy people Mark.   Sacking people creates a different feeling from asking more funsters to come and do really innovative stuff on Twitter for money.

That's the bit where your argument falls down Mark.  You get your money by lobbying a Stephen Conroy, Julia Gillard or like person.

It's much harder when you have to sell stuff.

This from The Australian today.

Mark Scott says the ABC has undergone a ‘painful journey’

ABC managing director Mark Scott has raised comparisons with Qantas as the national broadcaster moves from being an iconic Australian brand to a modern, competitive company.

Mr Scott was speaking as Qantas announced a restructuring of the national carrier, including the loss of 5000 jobs.

He told the Higher Education Conference 2014 in Canberra that the government-owned broadcaster has also experienced “quite a painful journey of transition” over recent years.

“I have sometimes thought of the ABC as being in a parallel set with other great once-government owned and run institutions, we clearly still are,” he said.

“If you are too tied down by the old, by old work practices and by old expectations, then that can hold you back and we’ve had some quite robust moments around that,” he said.

Mr Scott told the conference that 20 years ago the national broadcaster effectively had 2000 extra staff and an additional $200 million in real terms to produce a fraction of the content the ABC is producing today.

“We’ve had really quite a painful journey of transition there,” he said, citing the example of the most recent decision to close down the ABC’s television production studios in Tasmania.

“There is this tension that exists between holding closely onto the old, rather than being willing to let go of the things you need to let go of, to transfer to the new,” he said.

“I think the kinds of things we are going through are very similar to the kinds of things that Telstra has gone through, that Qantas goes through, how you hold onto the grand traditions of the brand but you find and reinvent new ways of delivering that service taking advantage of new technologies.”

I'll be on 2GB with Ben Fordham after the 4.30 news today Mr Ashby is now free to bring his case back to the Federal Court for a hearing on the substantive allegations.   More later.

The court's judgement is here.