“Can I borrow your power for our Earth Hour party in the park?” 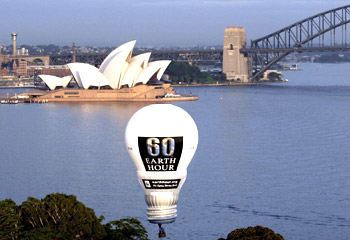 Those who’ve listened to me on radio might remember this story but it’s worth retelling as the country ‘celebrates’ another EarthHour tonight.

In 2008, I was living in a house inner-Sydney in a suburb I used to jokingly refer to as “The People’s Republic of Erskineville”. Solid Greens territory.

Next door to our place was a little park that used to have children’s play equipment in it until the Clover Moore local Council ruled that the monkey bars were potential killers – an “OH&S public safety hazard”. So the park became popular with the local drunks.

It was my birthday and I was expecting my parents. There was a knock on the door. It was two gen-Y dreadlocked uni-types.

It vaguely went like this: “Hi, we’re having an Earth hour party in the park next door on the weekend, any chance we can borrow your power?”

I laughed and one of them said, “you’re more than welcome to join us”.

I’m thinking at this stage, this was a candid camera moment.

“What do you need the power for?”, I asked bemused.

“We just wanna play some music and stuff .. it won’t be loud.”

I’m not sure what’s funnier. That she had a belief that power could be "borrowed" or that she needed power to celebrate her superior morality of switching the power off?

I heard on the radio this morning, a similar sounding Gen-Y promoting EarthHour saying “more Australians than ever before are aware of the threat of climate change”.

I think she’s right. People ARE very on to it. Very!

This advertisement is in the national press today. 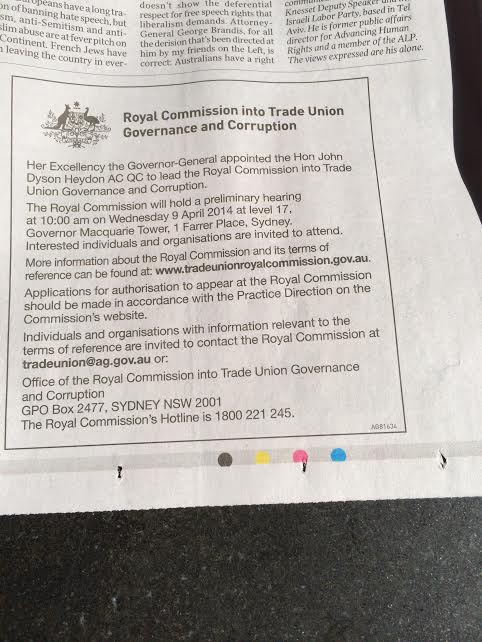 The Commission has invited you to attend:

The Royal Commission into Trade Union Governance and Corruption will hold a preliminary hearing in Sydney at 10am on Wednesday 9 April 2014.

At this hearing, the Commissioner the Hon John Dyson Heydon AC QC will make a formal statement outlining the broad direction of the Royal Commission. Counsel assisting will also make an opening statement. No witnesses will be called at this preliminary hearing.

The preliminary hearing will be held at level 17, 1 Farrer Place in Sydney. It will be open to the public although seating will be limited.

The Royal Commission can be contacted by email at TradeUnion@turc.gov.au or through the Hotline on 1800 221 245

The crassness of The Sydney Morning Herald 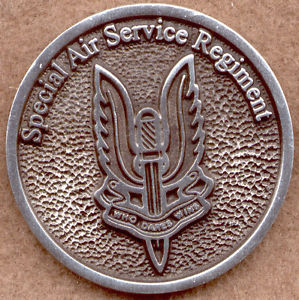 A highly decorated retired Australian soldier dies in sad circumstances and the Sydney Morning Herald gives it this treatment:

It has all the hallmarks of a Hollywood script: a grieving wealthy Australian heiress, a suite at London's luxurious Dorchester Hotel and a dead bodyguard, who was an Australian war hero.

The death of this highly decorated ex SAS soldier gets the innuendo/gossip treatment by Fairfax because Jerry Rouwhorst worked for Gina Rinehart's company as a security guard after he left the army.

Here is the Governor General's citation for his Bravery for Mr Rouwhorst:

Mr Jeremiah John ROUWHORST, Tas
During the afternoon of 20 May 2007, Mr Rouwhorst assisted a man injured during a riot at Dili,Timor Leste.

A riot involving almost 200 people broke out near the World Bank building in Dili, escalating into violence with several police personnel injured and vehicles damaged. As events intensified, a man was hit by stones and knocked unconscious. While he lay defenceless on the ground, rioters continued to attack him with sticks and rocks. Witnessing the callous act, Mr Rouwhorst left the safety of the Bank and tried to drag the victim into the bank compound. While dragging the victim into the compound he came under heavy attack. Once inside Mr Rouwhorst began administering first aid to the victim but was forced to retreat deeper into the compound to shelter from the barrage of stones. Realising the victim required hospital treatment, Mr Rouwhorst placed the man in a bank vehicle, and as they headed out into the crowd of rioters to drive to hospital, their windows were smashed in a sustained attack. Sadly the victim later died as a result of his injuries.

For his actions, Mr Rouwhorst is commended for brave conduct.

One of his special forces mates has copied us on a letter he has written to the paper. Will be interesting to see if they publish it:

Jerry Rouwhorst is a good friend of mine from the army and I found out about his death two days ago but I am sickened at your newspapers coverage of his death today.

He was a very decorated and distinguished soldier who was shot twice during Special Ops responses in the Middle East in and spent years recovering but still he took deployments.

You only know half of the East Timor story and who it was he saved let alone how he did it.

And your paper portrays him in such a trivial light because you think this is a celebrity story. He has a family in country Tasmania who knew their son took risks in his life but probably never imagined his death would end up a sidebar in your atttempt to have a dig at someone.

I guess you've never heard of post traumatic stress? This bloke lived with it every day and the Rinehart's employed him and supported him through his terrible ordeal.

Everything might be shits and giggles in your world but this bloke did more for Australia than I can ever tell you and I am sickened at your attitude to him.

I would appreciate you not publishing my name because of unit rules and security protocols.

Jane Smith on the Royal Commission and Johnnys who come lately

This email from Michael Williamson has not been published before.   Now that his sentencing is complete I am happy for you to see it.   Remember he pleaded guilty - eventually. 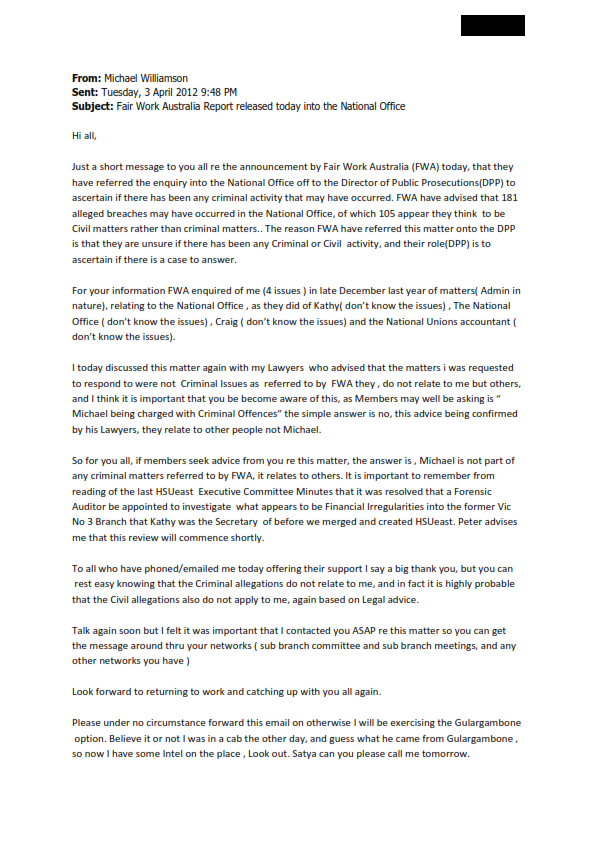 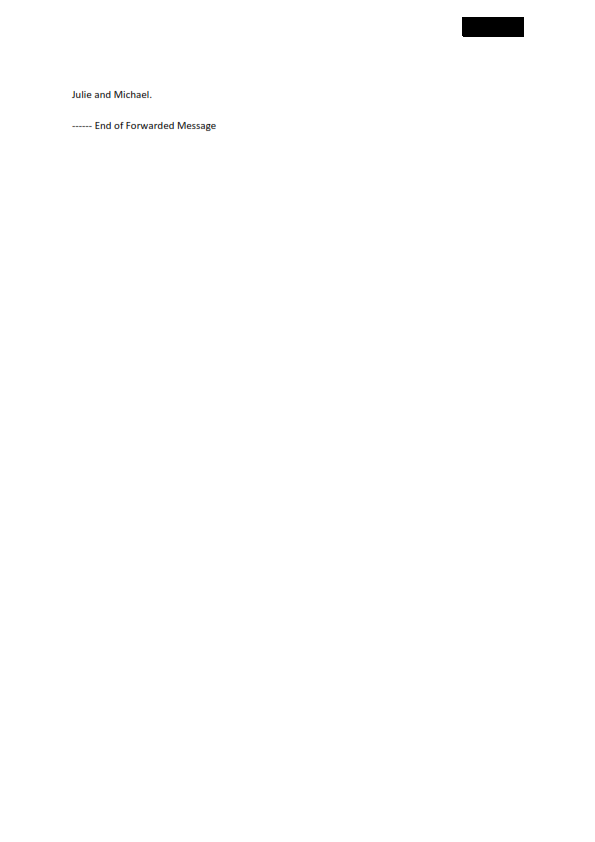 Ben Fordham with the inside story on 2GB today about the investigation into the Williamson matter with Kathy Jackson - the first few minutes of the show include his interview with Kathy here. 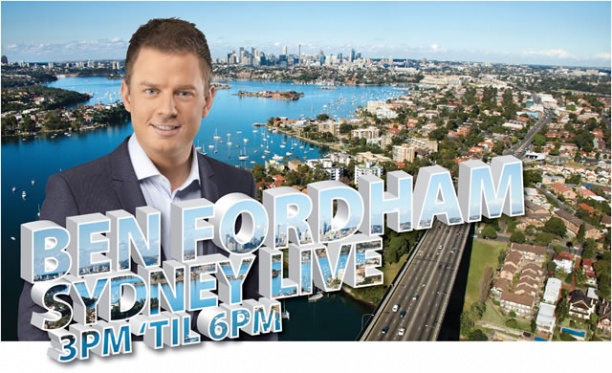 There are certain servants of the people who will forever remain nameless, unknown to you and your family - but it is because of them and their work that crooks go to gaol.   Thank you nameless people.