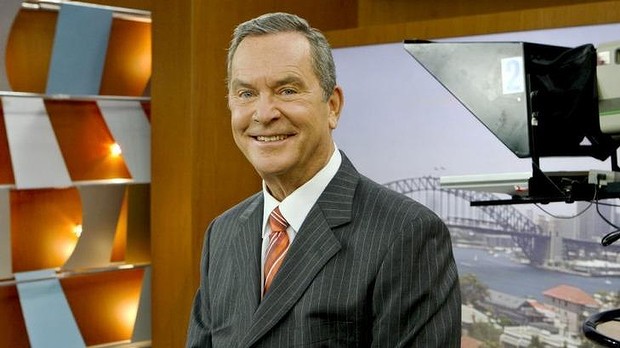 By Jason Morrison
You may have heard of the passing of Channel 9 and 7 newsman Ian Ross. Much has been said about his decency in an industry where too often some indecent people prosper.
I thought I'd share a story I put up earlier on Facebook about him.
Ian Ross was a lovely man and something he did for my family at a time of need says it all really.

I don't want to give you the wrong idea. We weren't close friends - more 'radio friends'. For about 18 months, we used to chat on my 2GB Drive Show each afternoon so he could promote the Channel 7 news.

In truth, they were 'paid for' 60 second live spots where we were meant to chat about what was coming up on 7news that night.

More times than not they'd go for much longer. Roscoe loved wandering off the topic and pushing the boundaries. He took the piss out of me and the listeners loved it. One time, he made some story up that I'd asked Chris Bath out when she was a young radio reporter and I was a 19 year-old cadet and our 1st date was a disaster. It was all bullshit but I still get people who ask me about it!

Sometimes we'd never even get to doing the actual promo which annoyed the managers of both stations but it was good radio.

We probably only spoke 'off the air' - in the real world - a handful of times. I actually only met him once.

Fast forward a few years: Roscoe had been long retired and I had changed stations. It was 2UE by then and after three strange years they had decided to give me the bullet. My demise made the papers.

It's a strange thing in the media business and I'm sure many can relate to this. Some of your colleagues kind of abandon you when you get sacked, ironically at a time when you really need friends and support.

Out of the blue comes a phone call from Ian Ross who rang to find out how I was doing. He'd heard our second child was due any day and he was worried about a then very pregnant Heidi and how she was coping. He wanted to send her flowers and promised to put in "a good word for me" with all his media mates to get me back into a job. I know he called one senior executive at 7 to suggest they hire me.

We hadn't spoken for years but his sincerity and care was touching at what was a lonely time.

But here's the amazing part of the story. I found out some weeks later that he made that call the day after he had been given the bad news by his doctor.

He was on borrowed time, quite sick and emotionally fragile - but he still was worried about someone else.

There are a lot of empty souls in the media industry. Ian Ross was not one of them.

All you hear people say about him on TV today is real. First class bloke.
Jason M

What's Joe Hockey up to? Why are you considering hurting industries that could save Australia? 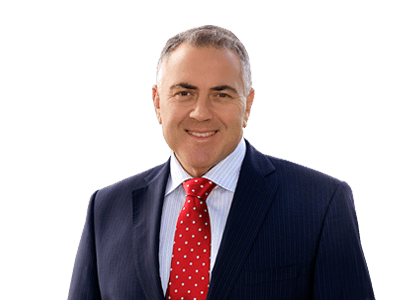 No one is disputing that the federal finances are a mess.

Rudd/Gillard/Rudd/Swan/Bowen stained the carpet so badly that it will take at least a decade to clean up their shambles and Joe Hockey seems rattled.

It seems Hockey is attracted to going the easy option ... extra taxes and not enough talk of cuts.

Tax increases will harm the country just as the economy is picking up.

To quote the Prime Minister "No country has ever taxed its way to prosperity".

The debt levy, if true, will raise a relatively small amount of revenue in comparison to Labor's black hole ...but surely we should only turn to this tactic once Government is made more efficient and welfare rorting is tackled?

And, what about the billions being blown in discredited green schemes, which the Government still, is committed to.

And tonight we're hearing strong talk of a tax hit on the mining and farming industry - the great hopes of the side.,

The Government is now facing a war with the mining industry with a planned tax change that will dwarf Labor’s MRRT mining tax in its impact on the sector.

Liberal and some National MPs were sent talking points this afternoon on how to deal with calls on any changes to the Diesel fuel rebate on mining and farming.

They say in part that the "Government is considering all options".

Fuel is the second biggest expense to Australian miners after labour costs.   Increasing the second most significant cost to operations will put jobs and pending projects at risk at a time that the industry already faces major pressures.

The rebate is historically available because most mining machinery operates on privately built roads - as opposed to public roads, which is what the tax is meant to pay for. Private roads cost the Government nothing to build or maintain.

We’re hearing that Joe Hockey and his disciples are pushing the proposal and it hasn’t even been run by Cabinet - let alone the party room.

One source, a very senior National MP is fuming that Hockey seems attracted to the path of least resistance, "when in doubt, tax".

My information is making miners pay this tax, that they are currently exempt from, will have a bigger impact on the sector than Kevin Rudd or Julia Gillard’s mining taxes ever would have.

Strikes me as a stupid move.

The debt has to be paid back - but we should not hurt industries that could be Australia's saviours.

Good morning! I am on the first plane to Melbourne today - back online tonight

I have some business to attend to in Melbourne, I'll have very limited time for updates but will post your comments here - please keep us all up to date!

Steve Gibbons is the former member for Bendigo.   Here's part of his valedictory speech when he left the Parliament last year.

I am going to start with the thankyous because I do not want to miss out on people who deserve to be thanked. I will start with my campaign team over what has been almost 15 years. I am talking about Leigh Svendson, Sue McKenzie, Marty Stradbrook, Elaine Walsh and Bill Murray. Then, of course, there is my staff. I understand they are all watching this on the Sky channel in the office, probably drinking copious cups of tea and coffee. To Sue McKenzie, Lisa Lane, Marty Stradbrook, Jacinta Allan, Elaine Harrington, Neil Wilson—Neil is, unfortunately, no longer on this earth, but I will never forget the day he came to the office to deliver a phone message and his tie was completely shredded. He had leaned over the shredder to do something, and his tie dangled into it. He had this big, silly grin on his face and a shredded tie. Lorna Erwin, Peter Downes, the late Richard Clarke, Shannon Farley, Cassie Farley, Sandra Chenhall, Natalie Pretlove, Jacki Dimond, Katie Condliffe, Fabian Reid, Marg Dearricott, Bill Muray, Jamie Driscoll, Stuart Mackenzie and Louise Fisher.

Bill Shorten was supposed to be at a morning tea with pensioners that had been arranged and promoted at Kangaroo Flat today.   Instead, he went to a private house.   Lorna Erwin's house.   The same Lorna Erwin named by the former member Gibbons. 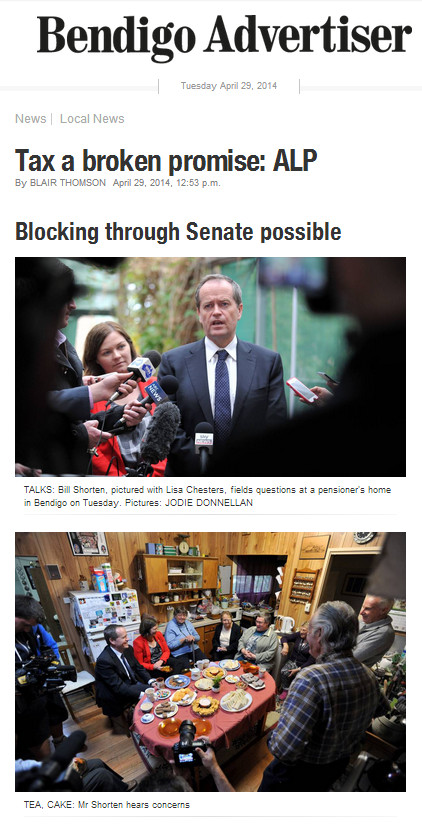 OPPOSITION Leader Bill Shorten has spoken to elderly Bendigo residents about potential changes to the pension.

The government has said changes to the aged pension are “inevitable”, but Prime Minister Tony Abbott signaled on Monday the cuts would not be made before 2017.

Tighter indexation and eligibility thresholds would be introduced in three years, he said, while other benefits could be adjusted now.

Mr Shorten met with eight pensioners at long-time ALP member Lorna Erwin's house to discuss the changes and challenges with the system.

And while white car boy Bill got the royal treatment, here's Bob Kernohan doing his best to get from one side of town to the other in pouring rain, no car, no bus, no taxi - shank's pony for Bob. 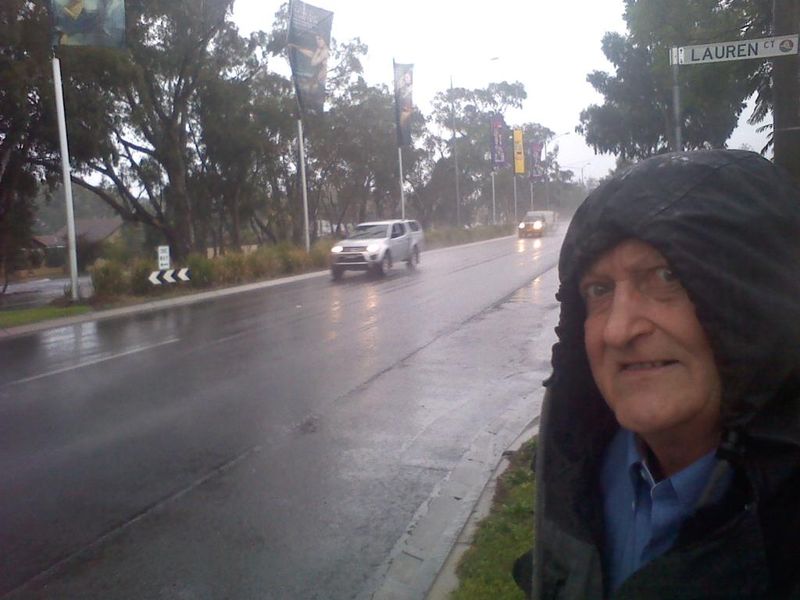 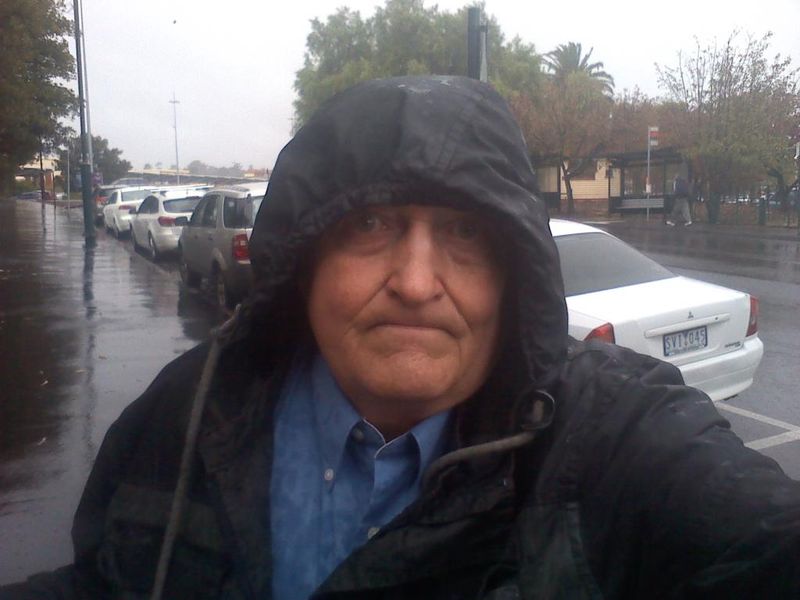 I am very proud you are my friend Bob.

Bill Shorten - will you swap your pension for mine? Stu of NT with a bulltish detector turned to 11.

Bob Kernohan is waiting for a cab to see Bill Shorten

You may have read some commentary about Ralph Blewitt, the Royal Commission into Union Governance and Corruption and the Victoria Police criminal investigation into crimes allegedly committed by Mr Blewitt and co-offenders.

Ralph Blewitt is a Totally and Permanently Incapacitated returned veteran who served his nation as a volunteer for a tour of duty as a rifleman with the 2nd Battalion, Royal Australian Regiment in South Vietnam during 1967-68.   Mr Blewitt saw things, did things and had things done to him that no man should have to endure.   He has chosen to make his home in Malaysia where he lives a quiet life with his wife Ruby.

I have been shown correspondence from solicitors for the Royal Commission into Trade Union Governance and Corruption to Mr Blewitt's lawyers.   The Commission's solicitors are trying to make arrangements for Mr Blewitt to speak with the honourable Commission by a video link from Malaysia.

I write with the greatest possible respect for the Commission and equally for the course of justice being pursued by Victoria Police and I hope these remarks might be helpful to each of their investigations.

Mr Blewitt is a central figure in the most important chapter of union related malfeasance of recent history.   He is a conspirator with others in a complex series of frauds that spanned 5 years in the commission and 23 years in the cover-up.   The crimes are disclosed on the documents and Mr Blewitt has a role in most of the documentary transactions.

In order for each of the Commission and the Victoria Police criminal investigators properly to understand what matters lie within Mr Blewitt's personal knowledge he will need to be spoken to with the documents at hand.   I can't see how that could happen on a video link.   I can imagine him sitting at an interview table with investigators perusing documents, turning them over, looking for the minutiae that might indicate a signature is a stamp rather than an original et cetera.

In the context of a Royal Commission of Inquiry where hordes of Her Majesty's Counsel will have no hesitation in submitting invoices of $15,000 for a day representing people with things to hide, perhaps the Australian taxpayer should take Mr Blewitt up on his offer to tell all that he knows about what he and others did.   In person, in front of the investigators.   The expense of an airplane ticket and modest hotel and meals - in context - is tiny.

A criminal justice system that paid for Carl Williams's school fees and conjugal entertainments owes us at least that.

The following Tracey Spicer Fairfax article has been cleared for publication by the generalisation police.   It contains no commentary based in sexism.  The men Tracey writes about, gifted with free-will by their creator, have have been examined and declared free of splatterings of tar from the same brush. 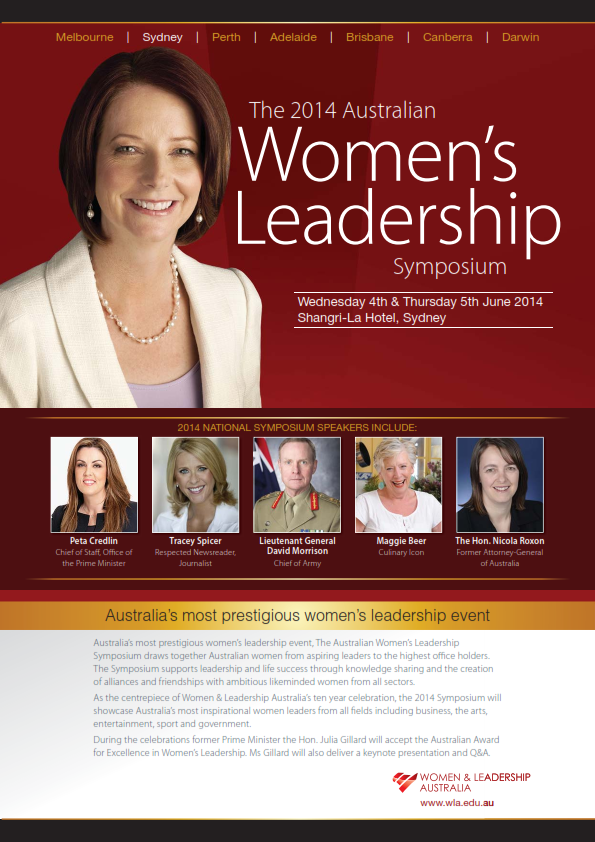 Men seeking objectification therapy can find it at the Normanby Hotel.

People of Bendigo. Your mission is to help Bill Shorten. You have one hour to get there. 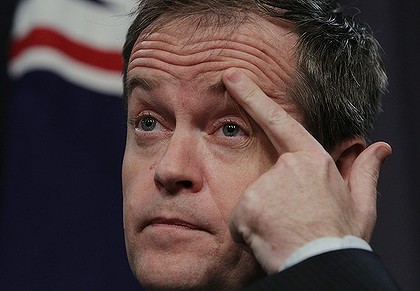 LEADER OF THE OPPOSITION
MEMBER FOR MARIBYRNONG

A brief doorstop interview will be held following the meeting.

Good morning 29 April 2014 - the royal commission is powering on