One of our readers received this email this afternoon.


“Progressive change does not occur without fighting for it… you have to fight for what you believe in.”

So writes Greg Combet in his new memoir, The Fights of My Life.

The book was launched today in Sydney by former Prime Minister Julia Gillard. It's a great, inspiring read.

Co-written with journalist Mark Davis, the book covers the former ACTU Secretary’s entire career as a devoted servant of the labour movement, from his earliest days with the Waterside Workers’ Federation through to a senior Minister in the Gillard Government.

Courtesy of Melbourne University Publishing, the Australian Unions' Working Life blog has six copies of The Fights of My Life to give away to lucky subscribers.

All you have to do is answer this question: which late union leader does Greg Combet describe as his personal hero?

For a clue to the answer, read the exclusive interview with Greg Combet on Working Life.

To be in the running, send your answer and contact details (with “Greg Combet competition” as the subject line) to editor@workinglife.org.au by COB on Friday, 15 August.

But don’t forget – you have to be a Working Life subscriber, so if you’re not one already, go to www.workinglife.org.au and enter your details today so you never miss a story.

While Dave Noonan is talking to the AFP he might mention that Tim Lyons has info on a known leaker!

Yesterday ACTU Assistant Secretary Tim Lyons wrote a column in The Guardian disclosing that he had been "leaked" an apparently confidential Commonwealth document.

A couple of days ago I was leaked a document from the federal attorney-general’s department. Reading it reminded me of the old gag: “just because you're paranoid doesn’t mean they aren’t out to get you.”

I know Dave Noonan from the CFMEU hates leakers.   Here's the story about the bad leak that Dave Noonan took to the police.

Maybe Dave could catch up with Tim for Chinese and show him how to report his leaker.

And just for good measure, here's the document Tim was leaked. 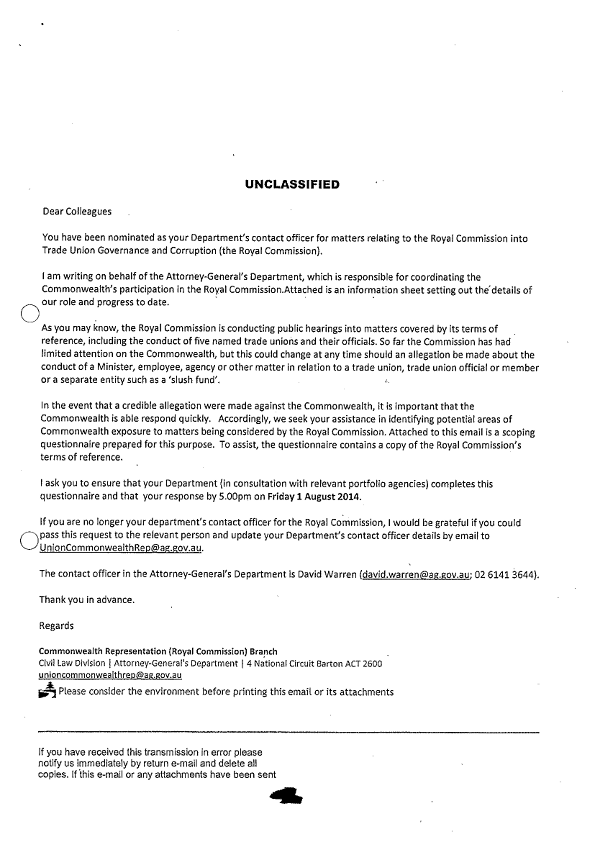 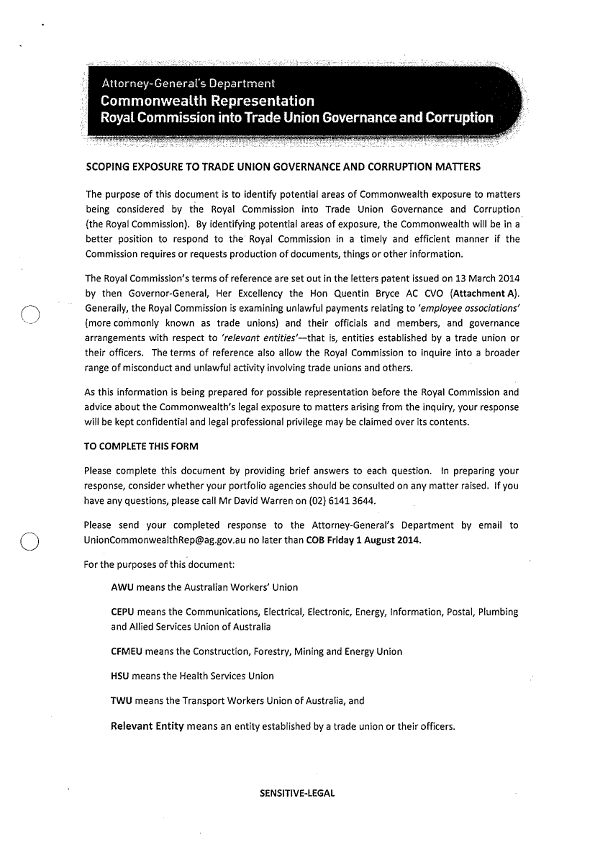 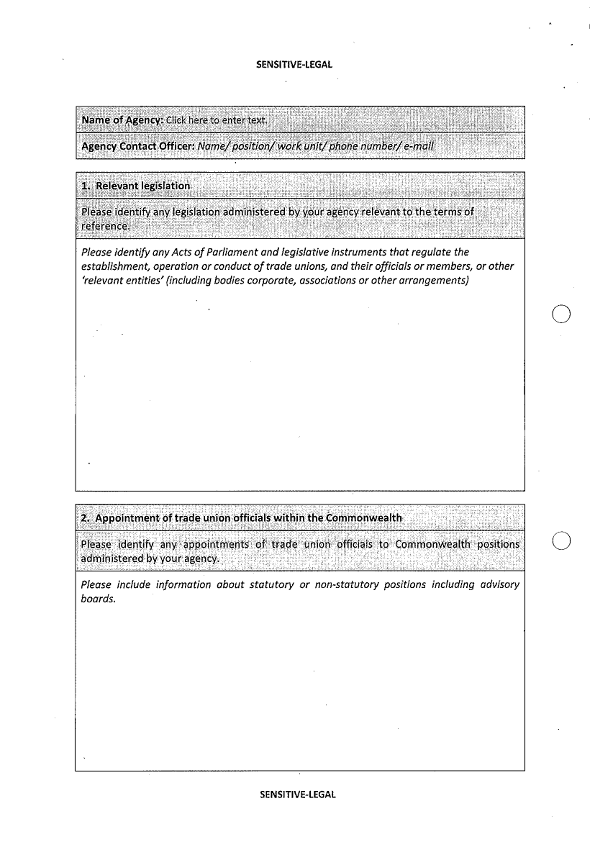 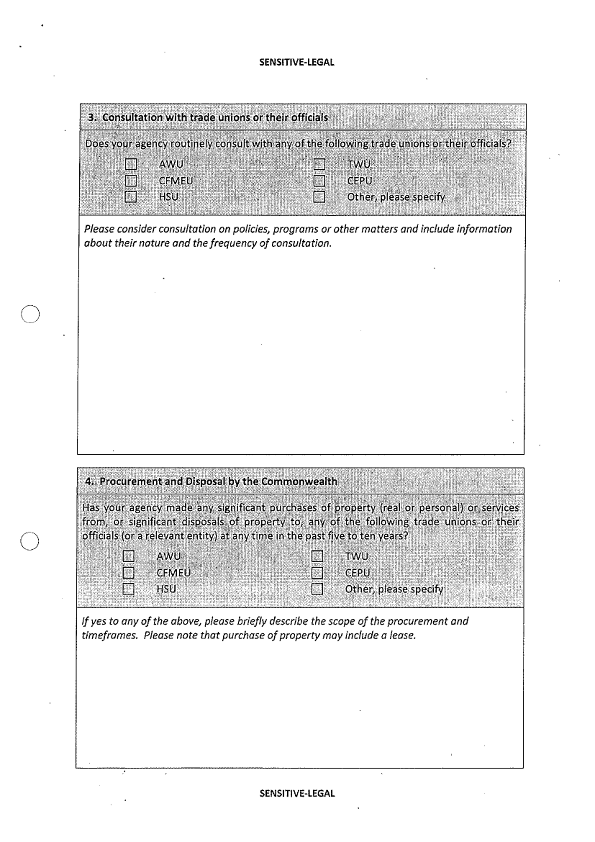 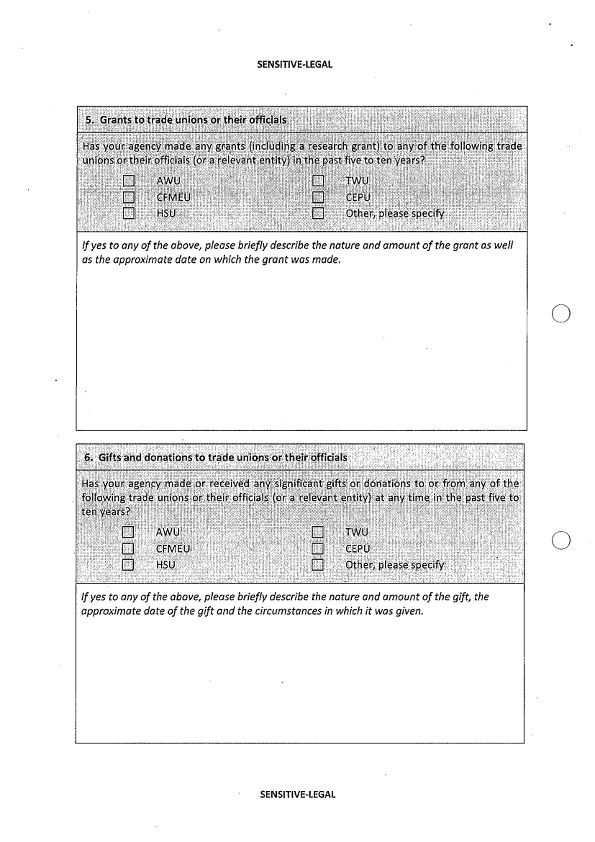 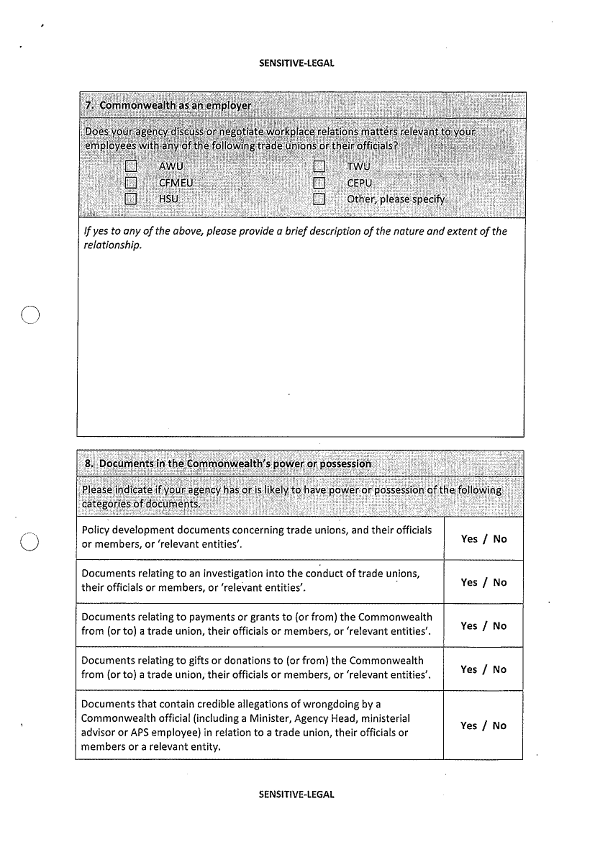 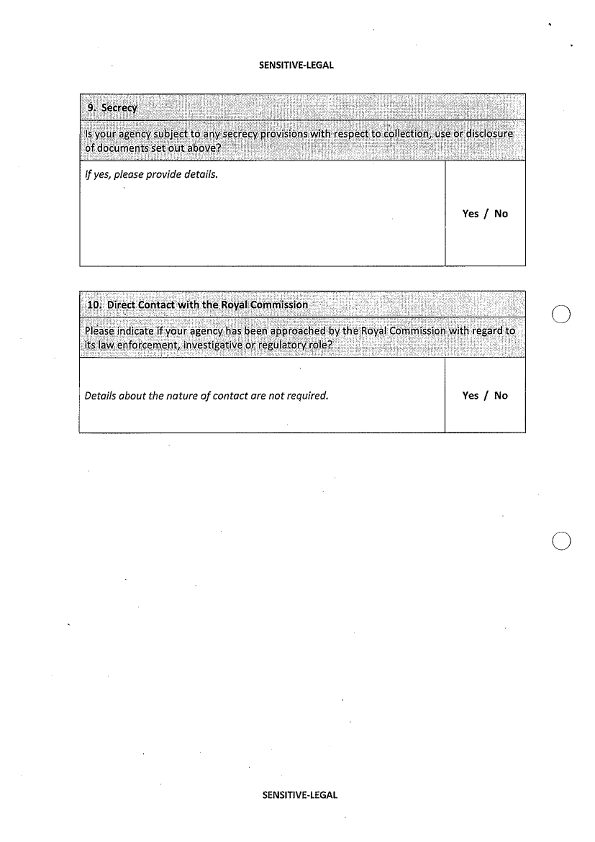 Commission to conduct hearings in Brisbane

The Royal Commission into Trade Union Governance and Corruption will sit in Brisbane next week when it opens matters into the Construction, Forestry, Mining and Energy Union (CFMEU).

Proceedings are scheduled to take place from Monday, 4 August to Thursday, 7 August 2014 between 10.00am and 4.00pm daily in a room provided by the Brisbane Magistrates Court, 363 George Street.

The Commission commenced hearings into the CFMEU on 7 July 2014. Transcripts of proceedings are available online atwww.tradeunionroyalcommission.gov.au.

Witness lists for the Brisbane hearings will be made available once finalised.

Senior Counsel Assisting the Commissioner, Mr Jeremy Stoljar SC, will outline details of the Brisbane hearing during an opening address on Monday, 7 August.

A webcast of proceedings will be available to the public through the Commission’s website.

Maybe it's just me - but so what if someone who had been in to the Royal Commission for a hearing came away with the sense that another person was likely to be called to give evidence.   Apparently for Dave Noonan that's the big issue to worry about!   Dave, I think you've got a bit more to concern yourself with than getting advance notice about someone being called.

Likewise for the reporter in the newspaper - is this the main game?

A UNION whistleblower allegedly knew a witness was going to be subpoenaed by the royal commission into union governance before the subpoena was issued, according to a sworn affidavit sent to the Australian Federal Police.

Lawyers for the Construction, Forestry, Mining and Energy Union have written to the AFP seeking an investigation into “breaches of commonwealth legislation resulting in possible criminal behaviour’’.

The CFMEU has provided the AFP with a sworn statement by Nicholas Fodor, an employee with superannuation fund Cbus, who details an alleged meeting with self-described whistleblower Brian Fitzpatrick.

Mr Fodor alleges he met Mr Fitzpatrick and union organiser Sammy Manna at a coffee shop in Sydney’s Penrith Plaza on May 26.

Mr Fodor claimed Mr Fitzpatrick told him that he had been to a “closed eight-hour courtroom ­interview with the royal ­commission’’.

He alleged that Mr Fitzpatrick said the commission was “after the big fish’’ and “they want the scalps’’ of the union’s national construction division secretary Dave Noonan and the union’s NSW secretary Brian Parker.

According to the union’s lawyers, Ms Glass was not issued with a summons to appear before the commission until later that day, and was not made aware of the summons until the next day when she was contacted by a process server.

Mr Noonan said the allegations cast grave doubt over the ­operation and impartiality of the royal commission.

Thank you to reader Andrew for the reminder about the late Flight Lieutenant Taylor, killed on operations in Irian Jaya, Indonesia on this day in 1977.

The disgraceful and false reports from Fairfax and others last year simply cannot stand uncorrected.  You've reminded me to get active today with the press council and have the matter resolved with apologies from those outlets that so horribly smeared the ADF and the memory of Flight Lieutenant Taylor.

Keep 'em coming Bill, we've got your back. 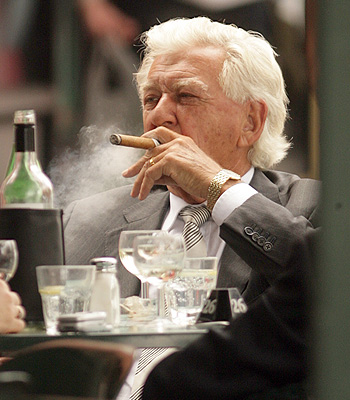 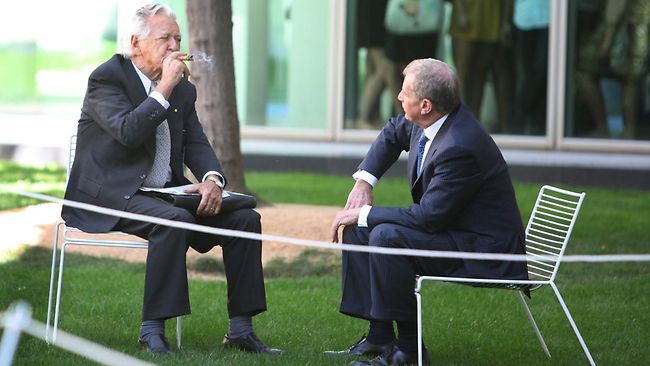 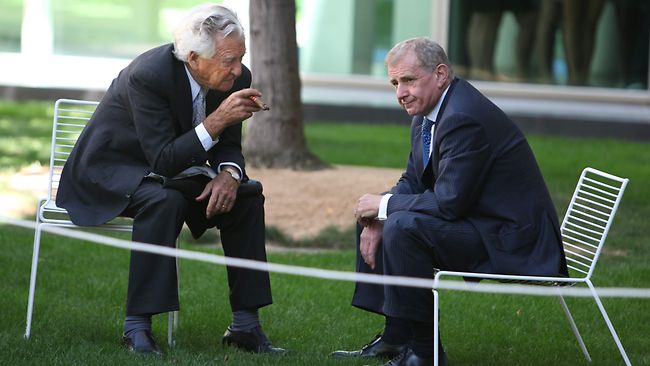 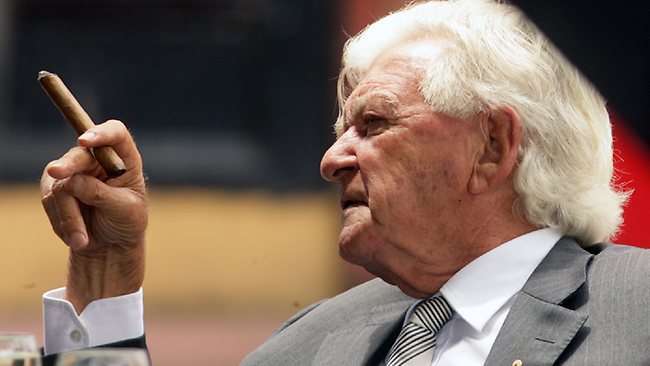 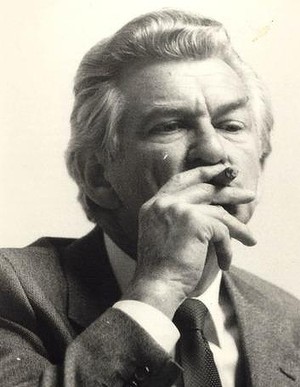 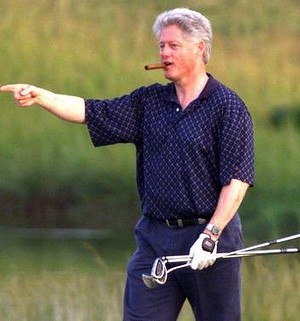 How did that Bill get there?   Let's get back with the program. 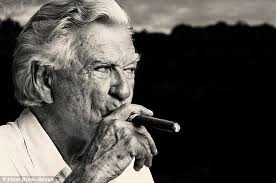 I was in Indonesia recently during the Presidential elections and I spoke to a number of young men who had been schooled in Madrassas under the influence of Abu Bakar Bashir.

Abu Bakar Bashir is regarded as a spiritual and religious leader for many extremist Muslims in Indonesia.   The Bali bombers followed his teachings.  Last week Bashir swore his allegiance to ISIS.

Whilst Bashir's views are not held by all young Indonesians, I heard a Muslim cleric delivering a sermon to a group of young men on an island near Lombok - it was frightening.

I don't see much evidence of Australia controlling or influencing the curriculum delivered in the Madrassa buildings funded by us.   That is unforgivable.

If you have a particularly strong stomach you may be interested in this video from reader Bill.   It is shocking, unthinkable, graphic and very important.   You can't fully understand what these people are up to without seeing what they have done.  Apologies in advance.

Kathy Jackson to take the witness stand at the Royal Commission on Wednesday this week - great news!

The Royal Commission has just released a notice announcing that its hearings into the HSU will resume Wednesday 10AM in Sydney and Kathy Jackson will be in the witness box.

Commission to resume hearing into HSU

The Royal Commission into Trade Union Governance and Corruption will resume its hearing into the Health Services Union (HSU) on Wednesday, 30 July 2014.

Proceedings are scheduled to take place in the Commission's hearing room on Level 5, 55 Market St, Sydney between 10.00am and 4.00pm. A witness list is now available online at: http://www.tradeunionroyalcommission.gov.au/Witnesses

The Commission began its hearing into the HSU on 16 June 2014. Transcripts are available online athttp://www.tradeunionroyalcommission.gov.au/Transcripts

A webcast of proceedings will be available to the public through the Commission's website.

That is great news for anyone interested in rooting out corruption within the union movement - and very bad news for those who have tried to besmirch Kathy Jackson's reputation.

I reiterate that everything Jackson did in her role as Secretary of her branch in relation to its own slush funds was done at the direction of a Branch Committee of Management - 14 rank and file health workers.   None of it was done corruptly - I don't like the way unions operated then or now but that's the way unions operated and Jackson operated hers within the law and the Labor movement.

There are those who are in thrall to Williamson, Shorten, Conroy et al and who seek to slander or diminish Jackson's reputation and credit as a witness.   I reiterate my usual declaration here, Kathy Jackson is a very close friend and I value my friendship with her.   You can use your own judgement to weigh up the facts here - for me the facts are these:

Well the truth is coming like a steam train Bill.