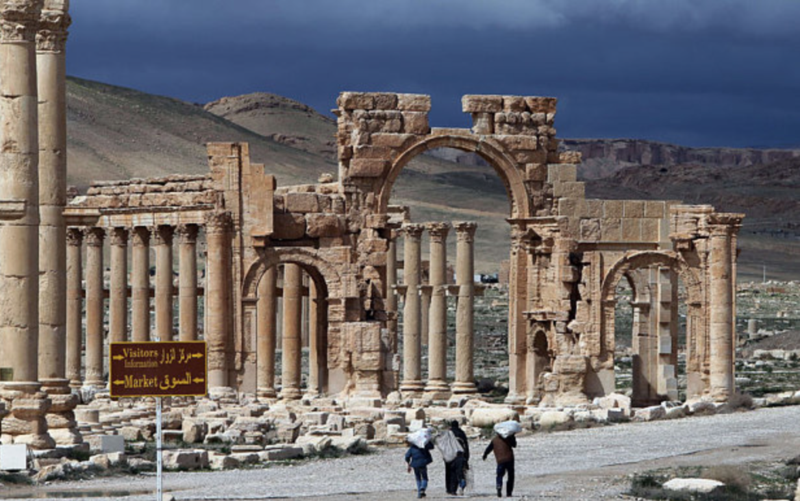 Here's Boris Johnson, London's Lord Mayor and a thinker writing in The Telegraph.

We must save Palmyra or the maniacs will raze civilisation

A learned culture that gave us diversity, beauty, learning and heritage is under threat from Isil

The other day, I was trying to persuade a political friend of the urgency ofdoing something to save Palmyra. To be fair to him he understood the horror of what could happen in the next few days. My friend had never been to the ancient city, so I tried to evoke the glory of the colonnades, the temples, the sculptures.

I explained the sense of wonder that fills the visitor as you watch the dawn break on these vast fields of rosy old masonry, the amazement at coming far into the deserts of Arabia and finding structures that derive so plainly from ancient Greece and Rome. I think I got across my almost-physical sickness at the idea of surrendering this urban masterpiece to the monsters of Isil.

I told him of my terror of the sledgehammers and the dynamite of these moronic iconoclasts, and I think he understood where I was coming from.

Gently, however, he posed the obvious question: why Palmyra? Why now? After all, we in the West have collectively decided to do very little to help hundreds of thousands of Syrian human beings. How can I justify an intervention on behalf of inanimate objects? There is, frankly, no easy rejoinder. The saving of human life should always come first. Nor is Isil unique in performing acts of awful cultural destruction: think of Dresden.

No nation is entirely guiltless of such crimes. Yet I want to convince you today that there would be something peculiarly catastrophic about the loss of Palmyra; and it is not just the superb quality of the remains – one of the truly breathtaking sites of the ancient world, fully deserving its UN world heritage status. I believe there is something more at stake in Palmyra – and that is the very idea of our Western civilisation and what we stand for.

The more you learn about the Palmyrenes, the more modern they seem to be. For centuries, the city was a great Greco-Romano-Semitic crossroads. Everybody went there, from across that immense and peaceful empire – from Scotland to Libya, from Portugal to Serbia and Iraq.

They gabbled away in their mile-long shopping arcade, in Amorite and Aramaic and Arabic and Jewish and Greek and (a little) in Latin; and they borrowed from each other’s culture with an exuberant promiscuity.

They had Roman baths and Greek theatres, and they mummified their dead in the fashion of the Egyptians. They had all sorts of government – oriental kings and Greek archons and Roman senators, sometimes at the same time. Insofar as the Romans were, for a long time, the dominant power, they positively encouraged local diversity, especially in religion and the worship of all types of Mesopotamian divinities.

Even after the Palmyrenes rebelled in the 3rd century, the emperor Aurelian rebuilt the temple of Bel.

And, of course, there were changes over the thousands of years: one type of temple gave way to another, and the temples then became churches, and the churches eventually became mosques. But never in its history has Palmyra faced a threat as brutal as today. Every conquering army, every general that has ever gone there has found something to admire.

Every succeeding culture has been generally willing to preserve and often to embellish. Not today – not these people. The maniacs of Isil are so narcissistic and so generally up themselves that they cannot cope with the idea of a great culture that predates Islam. They are so pathetic, so troubled, so fearful, so small, that they are driven to destroy – because they apparently cannot stand beauty; they cannot abide representations of the human form; and some of them are seemingly the kind of self-hating homosexuals who throw gays off cliffs.

They stand in polar opposition to modern Western values; and – perhaps more importantly, in case anyone should be tempted to make the mistake of any general Islamophobia – they are of course a complete betrayal of the legacy of the great mediaeval Muslim scholars: men like Avicenna and Averroes, without whose intercessions so much of classical learning – including the Platonic and Aristotelian foundations of our thinking – would have been lost.

Their behaviour is an abomination to all of us, Muslims and non-Muslims alike, and we cannot allow them to continue with their public and juvenile desecration of everything that is good and beautiful.

One day, Syria will return to some kind of peace. What hope for the Syrian economy, what hope for the tourist industry, if we allow them to smash Palmyra? Even if we had the time and the money, we could not hope to rebuild the ruins – not without producing some ludicrous Disneyland effect.

We have lost so much already: Nimrud and Hatra have gone; large parts of Aleppo have been wrecked. If we don’t make a stand now, in the face of this barbarism, when will we stick up for our common human heritage? What about the Umayyad mosque in Damascus – is that to be condemned for having gorgeous figurative Byzantine mosaics? Must we prepare ourselves for the loss of Leptis Magna?

If this violence goes on unchecked, it is not too fanciful to imagine the loonies taking over – some time in the next decades – in Egypt itself. Presumably their ideology would demand the dynamiting of the Pyramids, Karnak, Luxor. The whole thing is evil, unthinkable – and yet it could be about to happen tomorrow in Palmyra.

I accept that some readers will be left cold by an appeal on behalf of a bunch of ruins. But I can’t see it like that. For me, Palmyra embodies the great ideas we owe to the Greeks and the Romans: openness, generosity to other cultures – and above all the ideal of religious and intellectual freedom and tolerance. That is worth fighting for.

It may not be too late for some kind of exclusion zone around the site, or at least for air strikes. I would hope that our country, at the UN, would lead the world in calling for action and resistance. This isn’t a clash of civilisations. It’s a struggle between civilisation and nihilism, and a fight we must win.

Here's Boris Johnson, London's Lord Mayor and a thinker writing in The Telegraph.

We must save Palmyra or the maniacs will raze civilisation

A learned culture that gave us diversity, beauty, learning and heritage is under threat from Isil