Prime Minister Turnbull is speaking on the TURC. 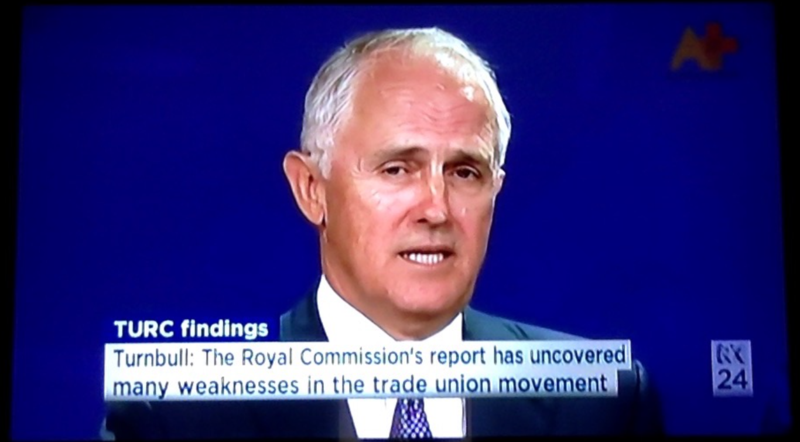 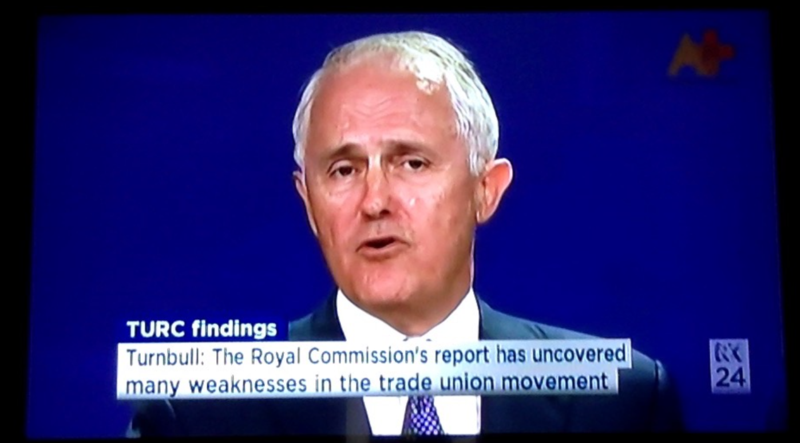 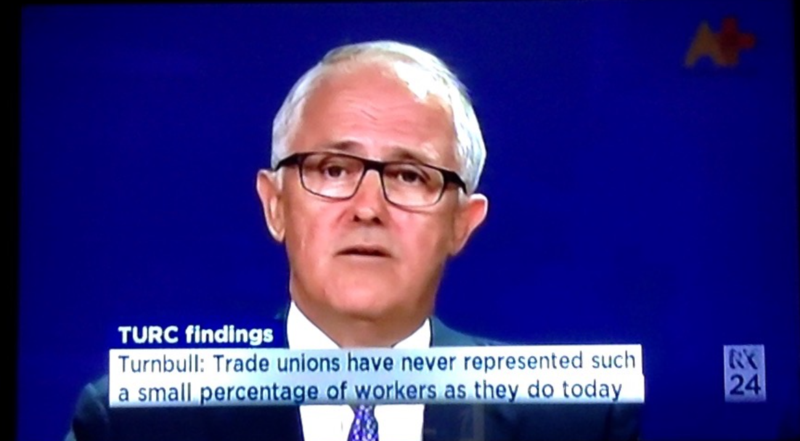 After a few minutes he is now on much firmer ground.   He speaks of the AWU Victoria Branch accepting $25,000 to sell Clean Event workers down the river.

He now states that his government is firmly committed to union reform.

He states that the Australian Building and Construction Commission legislation (rejected by the Senate) will be reintroduced in the first session of the Parliament in the new year. 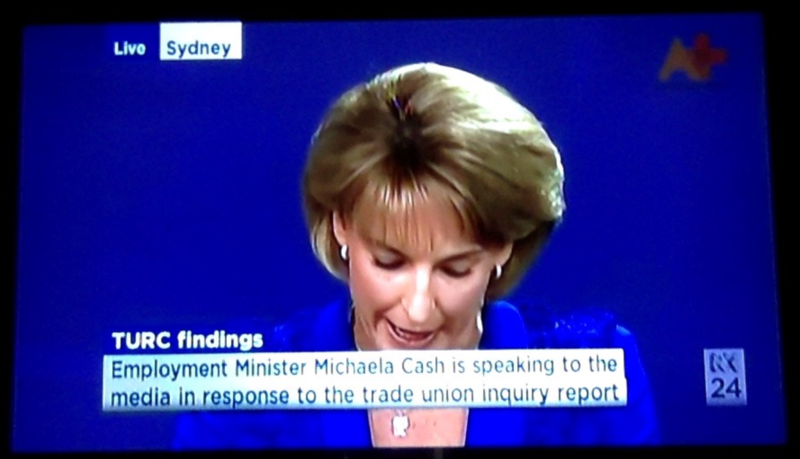 Then the Attorney General Senator Brandis gave us the zinger - the TURC investigations to continue for a further 12 months.

A very big day ending with some very good news. 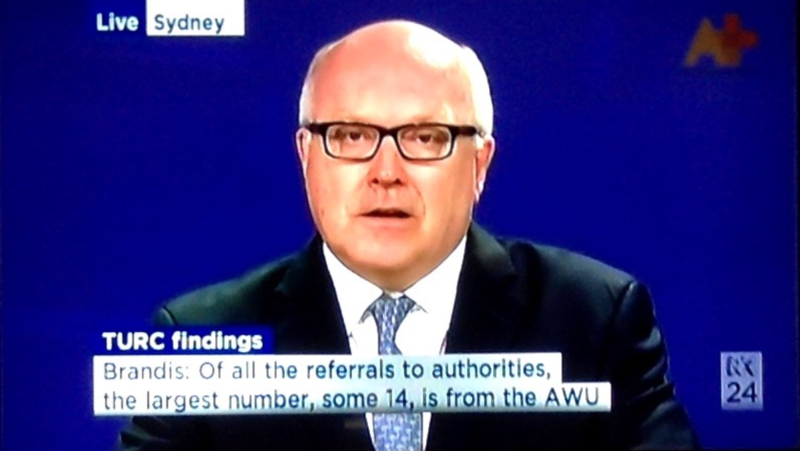 Anyone able to record the Prime Minister and publish to youtube or send MP3 - much appreciated!!!!

ACTU Dave Oliver on TURC findings - "there was no need for TURC, we set up a review under Judge Madgwick" 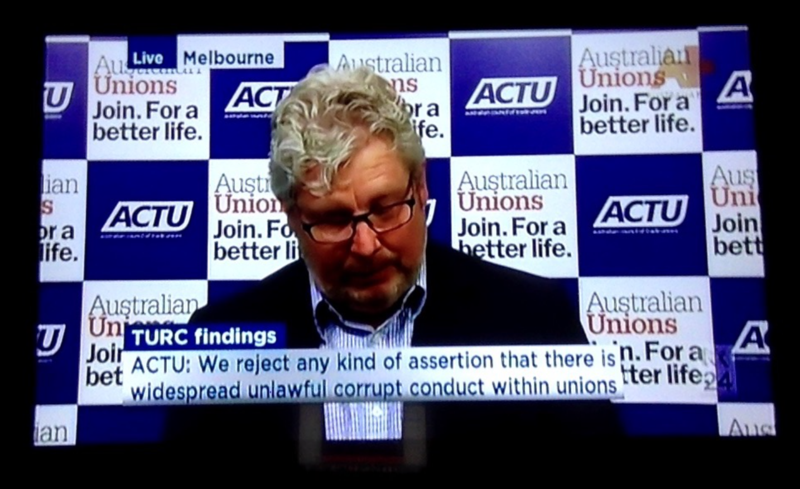 I've just watched Brendan O'Connor (there was no need for Royal Commission, it was a political witch-hunt) and am now watching Dave Oliver in his incredible performance at a press conference today.

3 times now Oliver has referred to the Madgwick report to the ACTU and his recommendations for union governance.

Bias much?   That would be this Judge Madgwick, the same one who helped the AWU write off the AWU Scandal but forgot to mention that little bit of background in his report to the ACTU.

The Commissioner provided his Final Report to the Governor-General on 28 December 2015.

As each State issued the Royal commission with State Letters Patent, the Report is also provided to each State Governor. 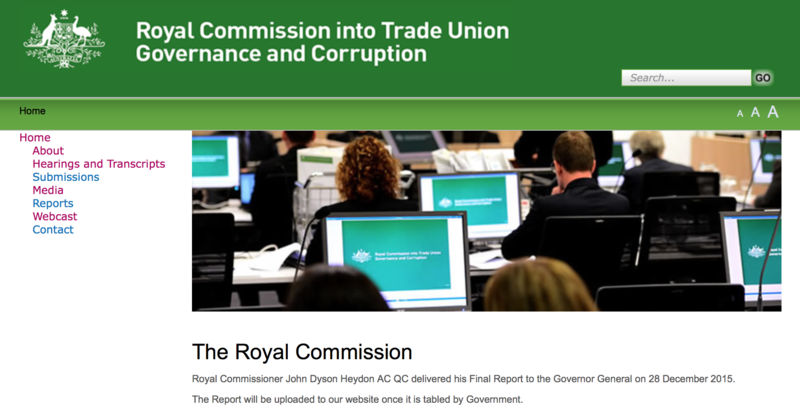 From The Australian today

Bill Shorten has tried to pre-empt the findings of a damning report into trade union corruption by appealin­g directly to Malcolm Turnbull to accept a series of Labor measures, including an overhaul of political donations rules.

The Opposition Leader has used a letter, sent to the Prime Minister on Wednesday, to try to ensure Labor is not trapped in a crucial election year by the findings of the Royal Commission into Trade Union Governance and Corruption, which will hand the government more ammunition to push for union reform after a series­ of scandals.

The royal commission is due to hand its final report to Governor-General Peter Cosgrove today and the government is expected to release the document as early as tomorrow, with Employment Minister Michael­ia Cash canvassing toughening-up the Coalition’s proposed union governance laws as a potential response.

Senator Cash also identified the militant Construction Forest­ry Mining and Energy Union as one of the targets of any government response.

“I believe that all Australians would want to see in place laws that ensure greater transparency and accountability for registered organisations — whether they be employer or employee representative bodies,” the minister told The Australian.

“The construction industry has been repeatedly identified as one with endemic problems of lawlessness.

“When repeat offending by the construction division of the CFMEU gets so bad that the Federal Court has to ask whether there has ‘ever been a worse recid­ivist in the history of the common law’, there is clearly a problem in the industry and this division of the CFMEU.”

The royal commission’s findings were to be a central plank in the re-election strategy of Tony Abbott and his successor, Mr Turnbull, is standing by royal commissioner Dyson Heydon amid an attack on Mr Heydon’s integrity led by Labor and the union movement.

Mr Shorten’s letter urges Mr Turnbull to consider a series of Labor measures to improve union governance, as well as linking the issue to a reduction in the political donation disclosure threshold from $13,000 to $1000 for individuals, companies and unions.

The opposition has attacked the government’s legislation to clean up the union movement as too onerous, saying it was unfair to bring penalties for union volunteers into line with those applying to highly paid company directors.

Mr Shorten has urged Mr Turnbull to engage with Labor on the issue in an attempt to negotiate a breakthrough to the polit­ical impasse, saying the “flagrant misuse of union members’ money by a small number of union offic­ials” was unacceptable.

The tribes of Tennessee

In 1865 the State of Tennessee gave birth to the Ku Klux Klan.   Maybe the University of Tennessee has a chip on its shoulder as a result and feels it ought to be more politically correct than........well just about everybody.

In September this year, the University of Tennessee's Office for Diversity and Inclusion issued this guideline with a phrase that's become notorious in the USA - Ensure your holiday party is not a Christmas party in disguise.

The university does not have an official policy regarding religious, and cultural décor and celebration in the workplace. However, we are fully committed to a diverse, welcoming, and inclusive environment.

In addition to consulting our cultural and religious holidays calendar when selecting a date for your event, we encourage you to implement the following best practices for inclusive holiday celebrations.

The state legislature was inundated with complaints, so now there's a better best practice note at the website for the Uni's happy holidays.

The University of Tennessee has done us all a great service.    We can see what political correctness looks like when it's taken towards its logical conclusion.   These are some of the tribes of Tennessee:

Apparently "diversity" is a bigger deal than academic success.  Diversity has its own Vice Chancellor, which is probably the root of their problems.

Vice Chancellor Rickey Hall and Janet Mock, keynote speaker at the 2015 OUTstanding Conference
The University of Tennessee, Knoxville, is committed to creating a vibrant multicultural, multi-ethnic community where diverse students, faculty, and staff are recruited and retained and where diversity scholarship is valued.

UT seeks to develop graduates who can effectively work across differences and who are prepared to live and work in a global society.

We have initiated several university-wide programs to raise awareness of and support for diversity, such as the annual Collaborators for Change diversity summit, the African American Trailblazer speaking series, and the Women in STEM Symposium.

What an abject disaster. All the feel good videos in the world won't bring the tribes together once they're set up in their separate camps.

PS If I've said anything that might offend someone somewhere, the University of Tennessee has a plan for that too.

The University of Tennessee, Knoxville, is committed to providing students, faculty, staff, and campus visitors an environment that is safe, as well as civil, and one that encourages the exchange of ideas through discourse in every aspect of campus life. All members of the campus community are encouraged to report bias motivated incidents or crime.

In the spring of 2010, Chancellor Jimmy G. Cheek assembled a Task Force on Civility and Community and asked its members to define civility and come up with a list of guiding principles and recommend ways we can further civility on our campus.

Have you witnessed or been the recipient of an bias-based incident? Report it now. 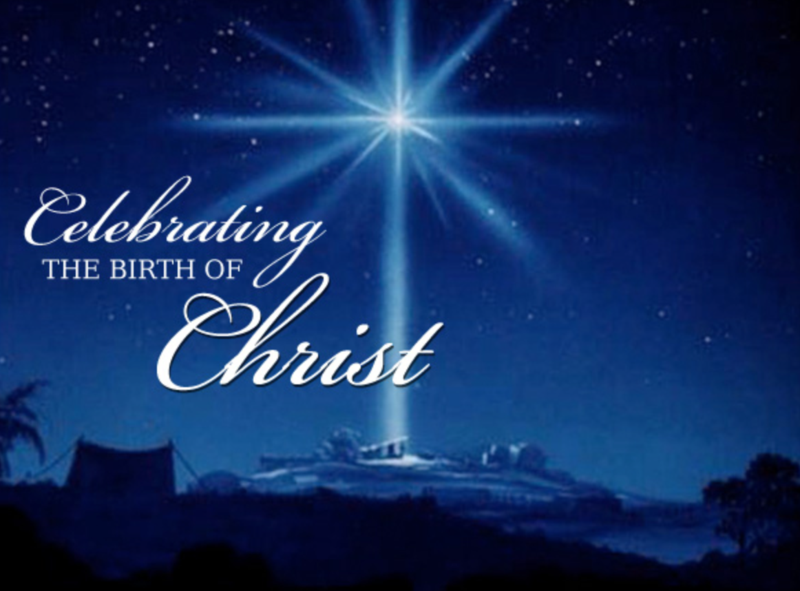