It's an election year - time for another look at some of The Party's best material.

This is the official After Action Report from Private Ralph Blewitt's first contact with the enemy in June 1967. 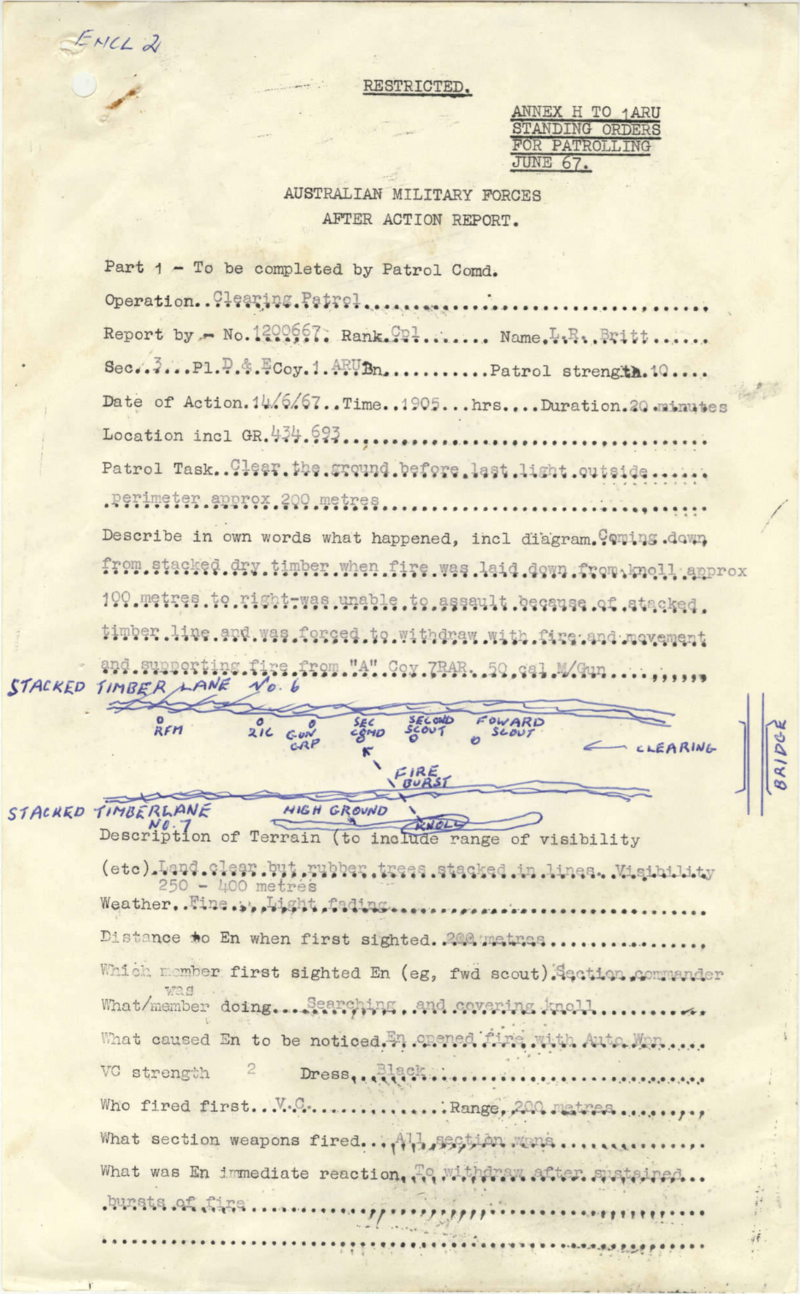 This bloke Ralph Blewitt has never seen this report.

Here is the first of 4 parts of a recording of Ralph's reaction.   God Bless you Ralph and thank you for your Service.

And here's an extract from the diaries - this map of our area of operations (including the Long Tan rubber plantation) should bring a flood of memories for many of our readers. 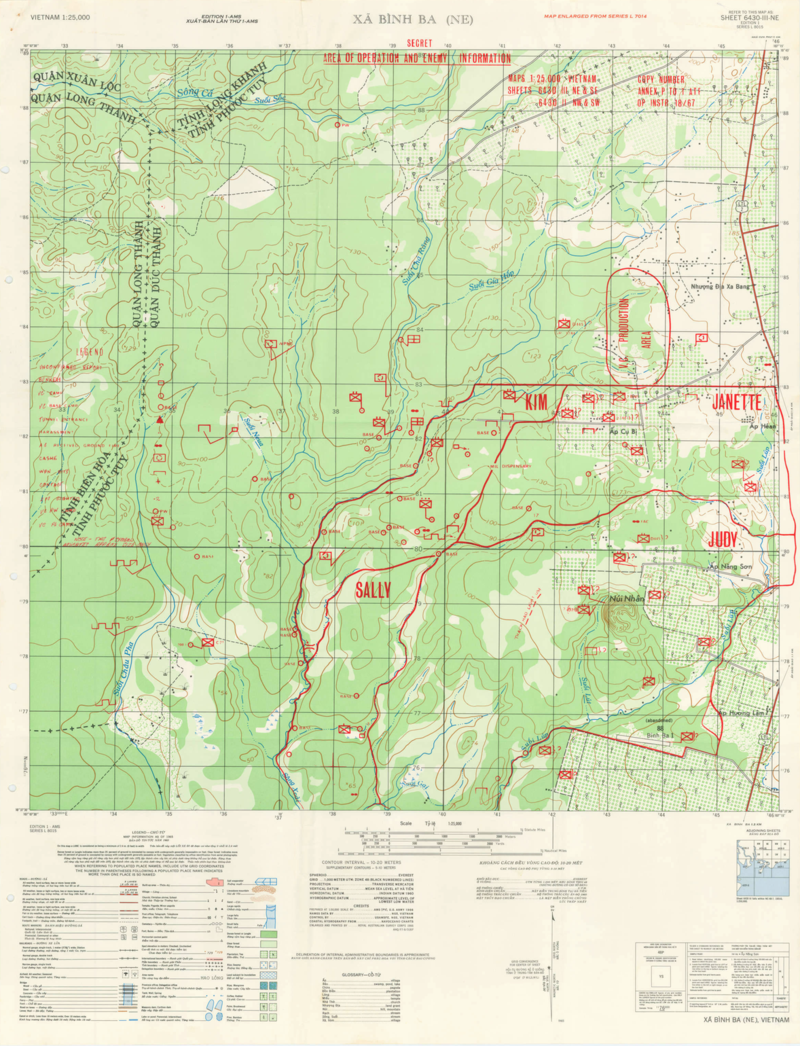 I am literally stuffed after a very, very long day.   To the people in the US awaiting our Clinton exclusive, stand by.

To those who've sent material and who are awaiting publication of our Victoria Police/GILLARD charges exclusive - stand by, one day won't change things.

I will post the interview with Ralph shortly.   You won't believe what you are about to hear.

If you have a bit of time on your hands and you're able to read a few hundred pages of handwritten/typed notes looking out for what may seem to be oblique references I'd love to hear from you.

I'd be very pleased to hear from people who've been known to this site for some time and I'd ask that you keep the task to yourself for a few months.

I don't really want to give out more background than that - I've been wading through this stuff and there's just reams and reams of it and I need some help.

Love to hear from volunteers!

This is what Slater and Gordon has done for its investors over the past 6 months. 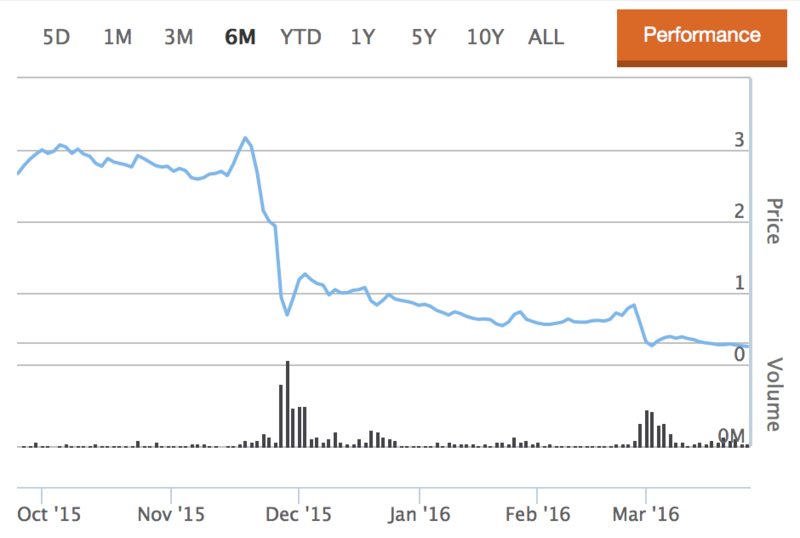 A Slater and Gordon share for Christmas was worth about $3.  By Easter, the Grech resurrection-free magic has transformed your $3 into 23.5 cents.   All time high - $8.07.   All time low - knowing you're associated with them.

Just before the Easter break we learned a little more about the Company's internal disarray.

The announcement came as Slater & Gordon shares fell to a record low closing price of 25c. A report by the Sydney Morning Herald said the drop valued the company as just $80m (compared to $2.75bn just over a year ago).

Weir agreed to take up the role in October of last year, with the appointment of former Ernest & Young auditor and current Fairfax director James Millar was appointed to the Slater & Gordon board.

In February, she announced a trading suspension prior to the announcement that the company revealed a $958m half-year loss.
Weir, who previously worked in similar positions at Seek and REA Group, will be replaced by the current chief financial officer Bryce Houghton, who replaced Wayne Brown as CFO late last year following a string of accounting errors.

Slater & Gordon has until the end of the week to prove to a banking syndicate led by Westpac and NAB that it has a viable plan to restructure the business, to secure new loan terms.  The firm will be forced to pay back bank loans within 12 months if an agreement isn’t reached.
ENDS - Thanks to TazSpinZone for the tip on Mona

The ABCC will kill?  Really?

This is part of the CFMEU's social media advertising material published by the CFMEU over the Easter long weekend. 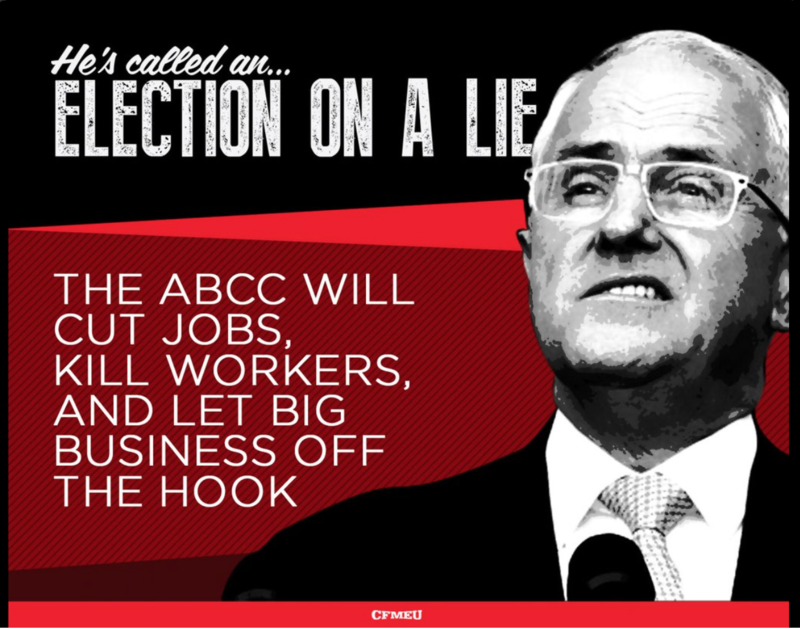 Pest control at Slater and Gordon

Shareholders may be interested in this very dark commentary on Slater and Gordon from Muso of WA.

I've just discovered this video which was published by Youtube some time ago, I've not heard from Muso for a while now and I think we would all love to hear from him again.

Muso, no matter where you're watching from - we all hope you'll enjoy this tribute to one of the great loves of your life.   The legacy is in great hands.

I've been told that Ralph Blewitt has today sent this note to the Legal Services Board of Victoria.

Legal Services Board of Victoria

I understand the Legal Services Board is investigating the 22 March 1993 false entry in the Slater and Gordon Trust Account Ledger receipting $67, 722.30 from the AWU Workplace Reform Association Inc as purportedly coming from me.   That false entry has not been corrected.

The Heydon Royal Commission into Trade Union Governance and Corruption made a comprehensive finding that the February 1993 purchase and conveyance of 1/85 Kerr Street into my name was an entirely fraudulent transaction.   No privilege can apply to legal advice in the furtherance of that fraud.

In particular I identified a series of documents over which Slater and Gordon made an unopposed claim for client legal professional privilege to the Supreme Court of Victoria (that was prior to the findings of the Heydon Commission).  Those documents were apparently used in the firm’s conferences with Geoff Masel of Phillips Fox acting for the Legal Professional Liability Committee. Beyond the conference notes with Masel, these source documents are properly a part of my file held by Slater and Gordon and despite my previous requests and my lawyer Bob Galbally’s previous requests, Slater and Gordon has not delivered all of them to me: 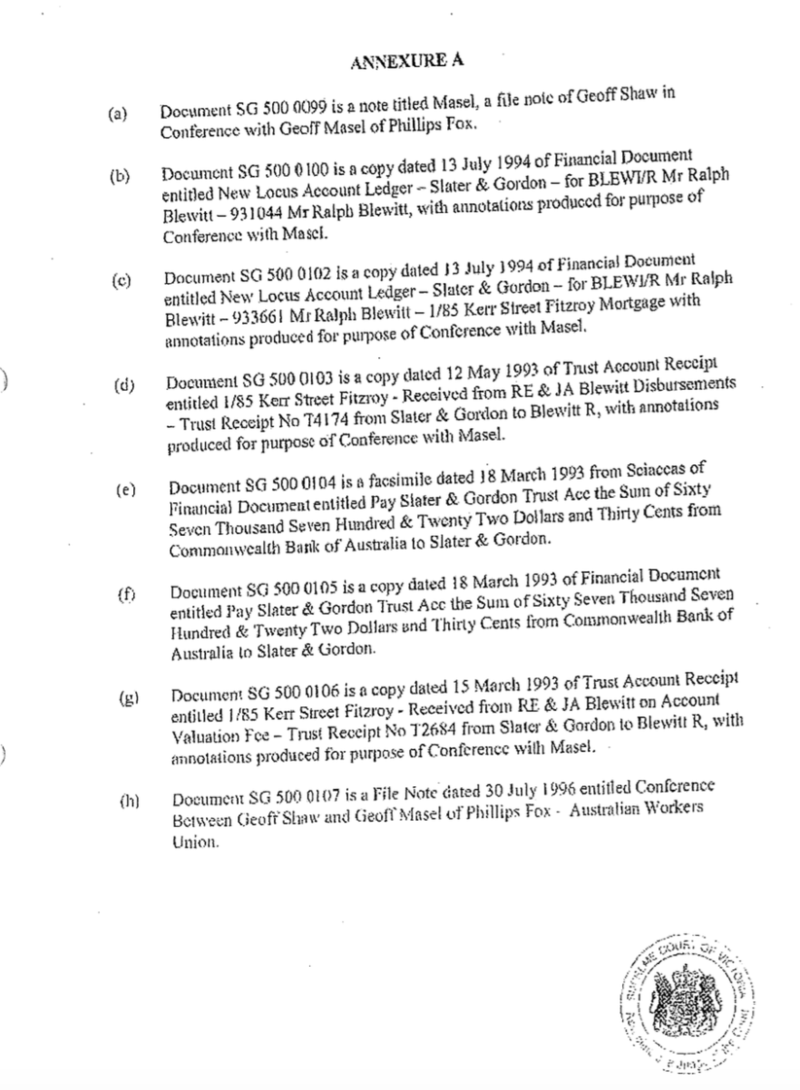 Slater and Gordon's failure to respond to my requisition

I wrote to Slater and Gordon last Monday, 21 March and asked that it send me copies of those my documents by the end of the week.   It has not done so.

That you urgently seek from Slater and Gordon the production of those documents and that you send me copies of the documents.

I replied to Tony Nutt's fundraising email about Turnbull's leadership - have you? A quick straw poll.

No.
I can't support the election of a Party with Turnbull as its leader.
Sorry. 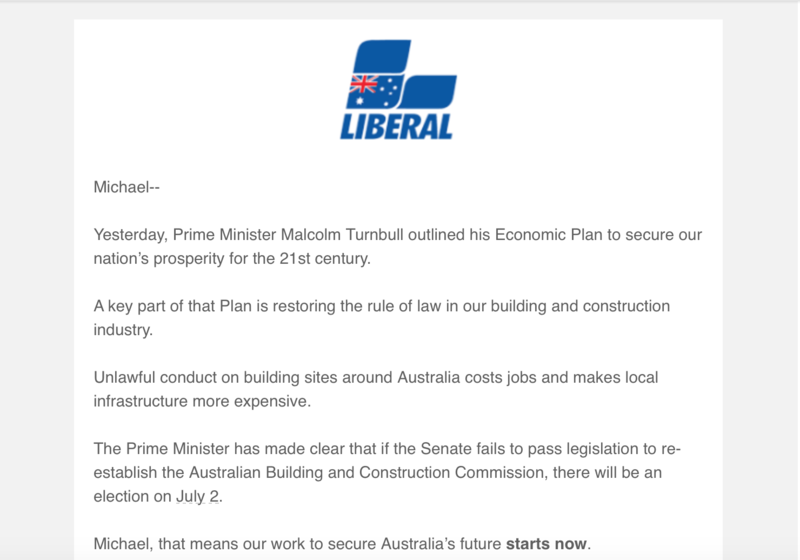 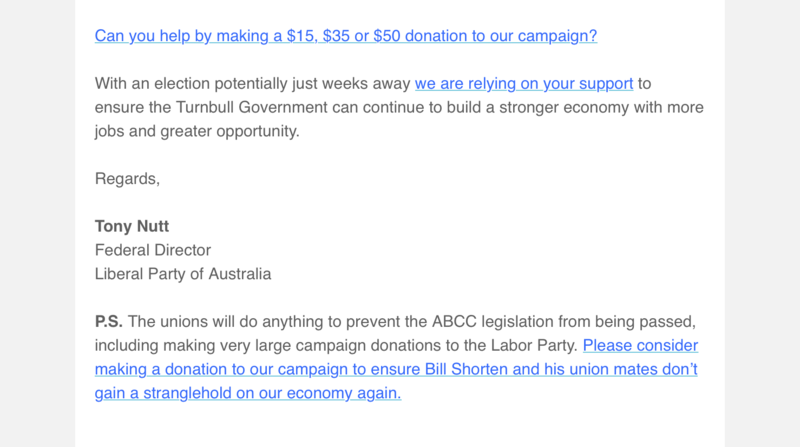 I was surprised to receive a few notes from regular readers who had made similar replies.   So a quick straw poll please - how about you?  Have you received this email?   Has Turnbull affected the way you feel about supporting the Liberal Party?

Turnbull decries terrorism, says Terrorists are cowardly and says we are united in this battle against Terrorism.   This Terrorist threat is a very real one - it reminds us about the importance of secure borders and strong intelligence  and security organisations - he says the intelligence services in Australia are very, very focussed.

On what Malcolm?   Terrorism of course.

Is that the country we are at war with, Terrorism.?  Sorry it's not a country.

Is that the group we are war with, Terrorism.   Sorry, it's not a group either.

Turnbull goes into chapter and verse about how Terrorism is frightful and cowardly and awful.   But compare and contrast his answer when Keiran Gilbert quotes Trump on the Muslims behind these terror attacks and asks Turnbull to comment on the Muslim Jihadi terror threat here.

Suddenly - and without using the word Muslim - we are all one people, all united in harmony, no one should be ostracised.   When Gilbert narrows the field down to talking about Muslims and Jihad, that scary and awful Terrorism becomes something that should not affect us, we should go about our daily lives normally etc etc etc.

This bloke has shut down his rational faculties and replaced them with fantasy land niceness - where Terrorism is something we all condemn unless it's Muslim terrorism in which case we offer love in return.

Here is another of the Left's show ponies Justin Trudeau with the standard Leftist "solidarity, stand together against Terrorism" etc response without mentioning Islam or Muslims.

Just hours later he sent this message to the world which must offer immense comfort to Islamists and dread to the families of people who have been killed by Jihadis.

Meanwhile we're told this man is a threat?