The most feminist of all Yassie @yassmin_a

This bloke is beyond laughable.  What's he want?  A march, Australian flags, bands and a saluting point?

David Morrison, former army chief and Australian of the Year, has suggested an Anzac Day-like event for domestic violence victims, likening them to fallen servicemen and women.

“We pause every year, twice a year, on the 25th of April and the 11th of November, as we should to think about the sacrifice made by soldiers, sailors — those men and women whose names sit on the roll of honour at our Australian War Memorial,” he said in an opening speech at the National Family Violence Summit in Canberra.

“That act of remembering their sacrifice makes us who we are today, and we need to pause, I think, at least on one day of the year to think about millions of Australians who have had almost no say, whose potential, whose aspirations, have been squandered as a result of domestic violence.”

He said the nation needed such days for the “great national cause”, rather that “just pausing when there is a horrible act of domestic violence or the sentencing of a perpetrator”.

Just dreadful news from our mate Garry Goldsworthy and his wife Wendy today.

Garry N Wendy GoldsworthyView Profile
Good Morning Michael.
Words are short this morning waking to this horrible news, it's like a never ending nightmare.. Again these animals have perpetrated their vile act in the name of their Religion, Greed and contempt for life. Another very sad day. It sickens both Wendy and I and leaves a feeling of anger and frustration.
We first met Jurgen and his partner Sabine back in 2014 in Labuan. The horror he has suffered, having witnessed her murder when captured, and now this. He was not a just a tourist,to us that is almost an insult,he was a fellow sailor and world traveller and a human being.
Sadly these news stories are just another blip on the radar and go by unnoticed by most. It isn't important to someone whining about their penalty rates or the latest Trump moment.
Jurgen was a character and celebrated life everyday as most of us cruising sailors do.
We hope that these animals will one day be held accountable. This also brings back memories of John and Rob.
We will never forget RIP now Jurgen, Sabine, John and Rob.
Regards Garry and Wendy

German tourist beheaded by IS-linked militants in the Philippines

ISLAMIC militants in the Philippines have beheaded an elderly German tourist they had been holding hostage.

Islamic State-linked Abu Sayyaf militants posted a video of the killing after a deadline for a $US600,000 ($781,000) ransom passed.

The video showed a machete-wielding militant behead Jurgen Kantner. The German had appealed for help twice in short video messages, saying he would be killed if ransom were not paid.

Jurgen Kantner, in an undated image, was abducted from his yacht in November. Picture: SITE Intel Group via APSource:AP

On Monday, Jesus Dureza, presidential adviser on the Philippine peace process, said officials had exhausted all efforts to save Kantner, 70, who was held on the tiny southern island of Jolo. He made no mention of the ransom demand.

The Philippines’ armed forces pledged in a separate statement to bring Kantner’s killers to justice and to continue operations to free other hostages held by Abu Sayyaf.

In Berlin, Chancellor Angela Merkel called for a united international front against terrorism.

“The chancellor condemns this hideous attack that shows, once again, how unprincipled and barbarous terrorists act,” her spokesman Steffen Seibert said.

The Abu Sayyaf, blamed for the worst terror attacks in Philippine history, had previously demanded a ransom of 30 million pesos ($780,000) be paid by Sunday to spare the 70-year-old.

Kanter was abducted from his yacht, the Rockall, in waters off the southern Philippines last year.

The vessel was found drifting on November 7, with the body of Kantner’s female companion, Sabine Merz, bearing a gunshot wound.

Jurgen Kantner was killed when ransom demands for his release were not met. Picture: SITE Intel Group via APSource:Supplied

The couple had previously been kidnapped and held for 52 days in Somalia in 2008 before they were freed, reportedly after a huge ransom was paid, press reports said.

The Abu Sayyaf, whose leaders have pledged allegiance to the Islamic State movement in the Middle East, have been kidnapping foreigners and Christians for decades, holding them for ransom in the jungles of the strife-torn southern Philippines.

They have frequently killed hostages if their demands are not met.

Heavily-armed members of extremist group Abu Sayyaf pictured at their jungle hideout in the mountains of Sumisip, on the southern Philippine island of Basilan, in 2000. Picture: SuppliedSource:AFP

The group, formed from seed money provided by a relative of Al-Qaeda mastermind Osama bin Laden in the 1990s, also carried out the bombing of a ferry in Manila Bay in 2004 that claimed 116 lives in the country’s deadliest terror attack.

The military had been pressing an assault against the Abu Sayyaf, attacking their camps and bombing their hideouts just before Kantner was killed.

These are the same people who whom Julie Bishop has direct $58,000,000.00 in Australian Aid Funding to pay for Islamic Madrassas or so-called schools where the Koran is the primary text.

To Garry and Wendy we are beyond words in sorrow at your loss and the grief and anguish you suffered through the horrific murder first of your two Canadian friends and Sabine and Jurgen.

I hope you're tooled up Garry.

God bless you and all who sail with you.

What a shameful display - crawling to the United Nations for the chance to sit alongside Saudi Arabia judging others on human rights.

What the hell do we gain from that?

Concetta and Ken&Barbie might like the travel and parties but that's a disgraceful imposition on the rest of us.

Listen to CFVW explain to their ABC that it's not even about us - it's about the freakin' whole Pacific region.

The World Is Not Enough.

With the shares at 10 cents today the Liberal Party should buy the joint out, take the furniture to Grey's Auctions to get their money back and start going through the files. 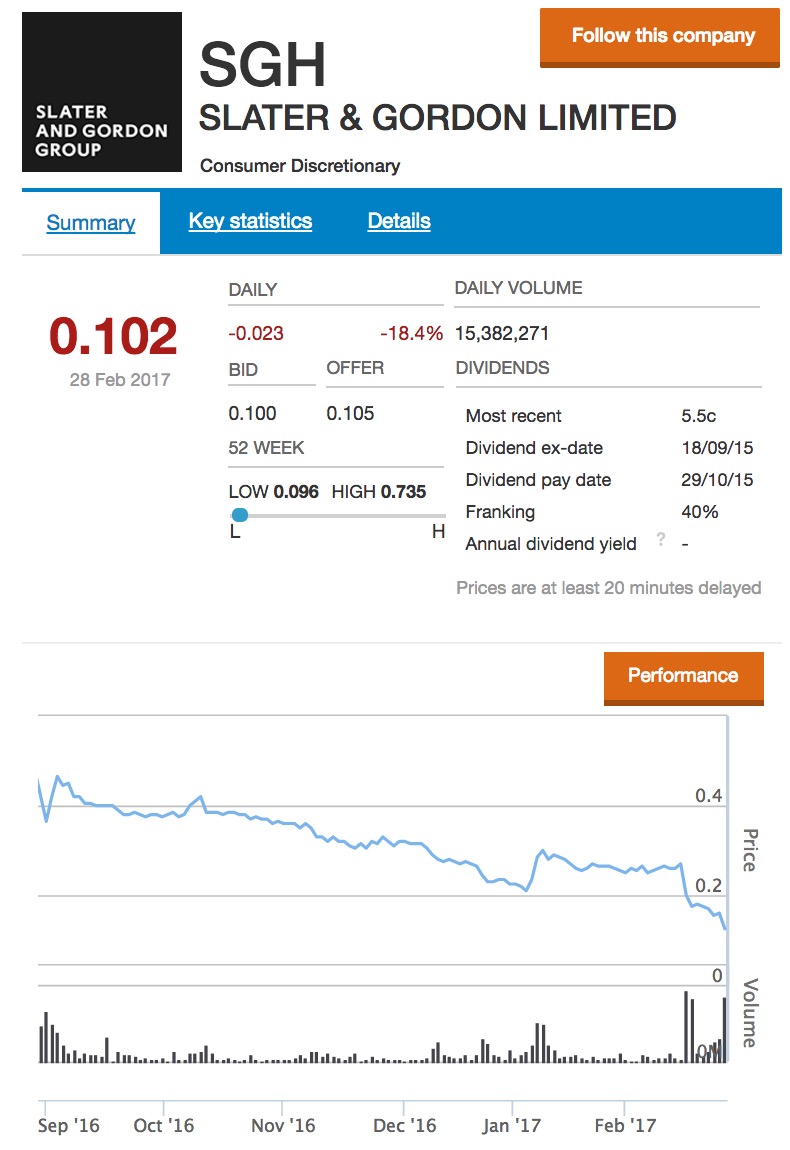 Stu of NT - save the last dance for Mal

Today I sent this letter to the Sovereign and Chancellor of the Order of Australia. 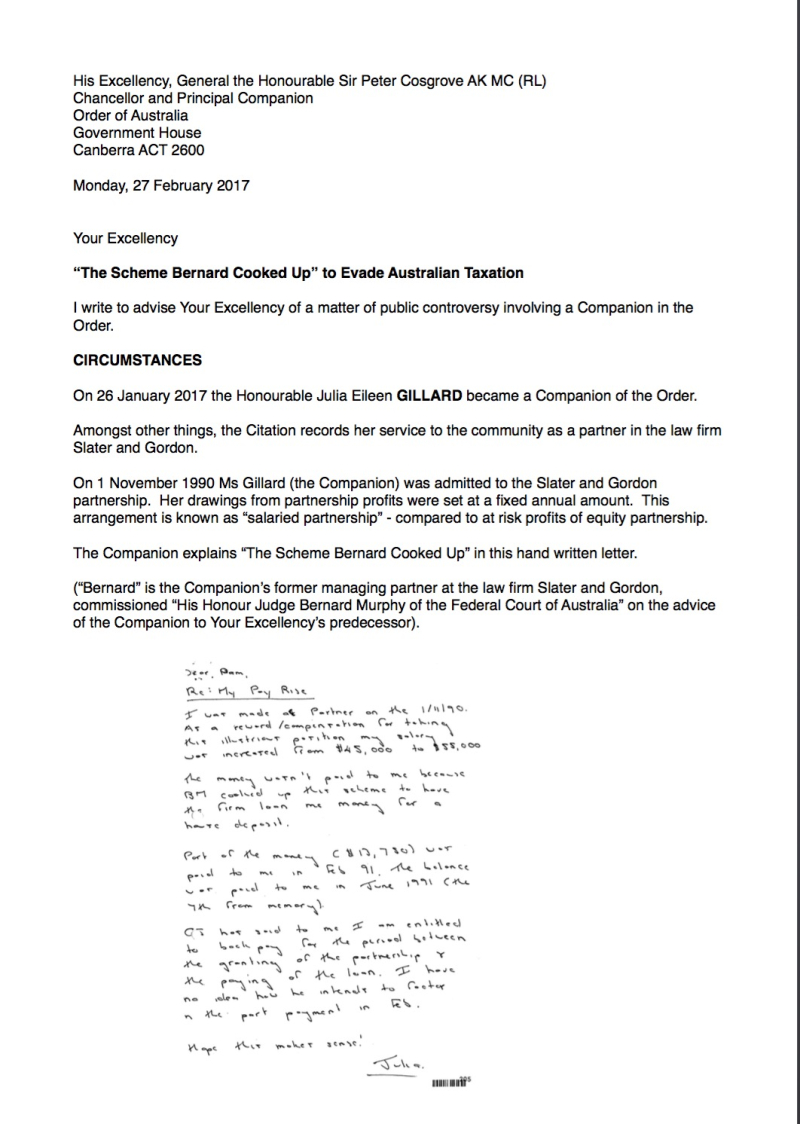 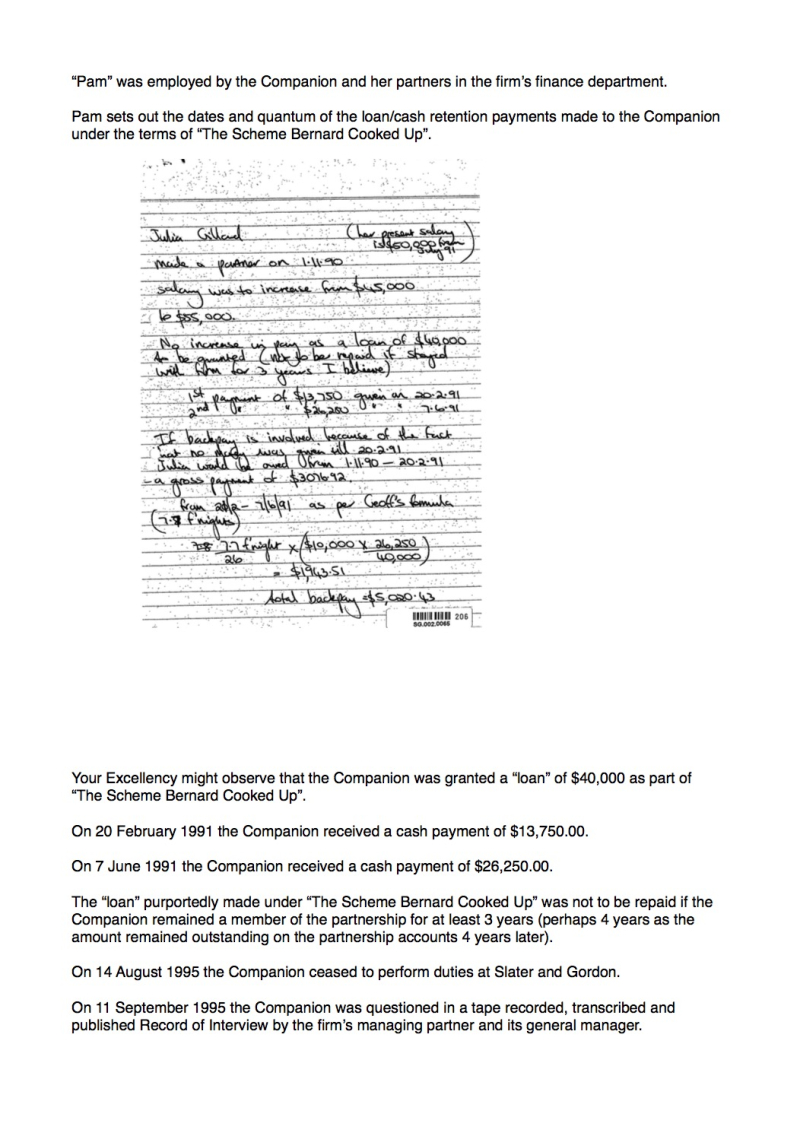 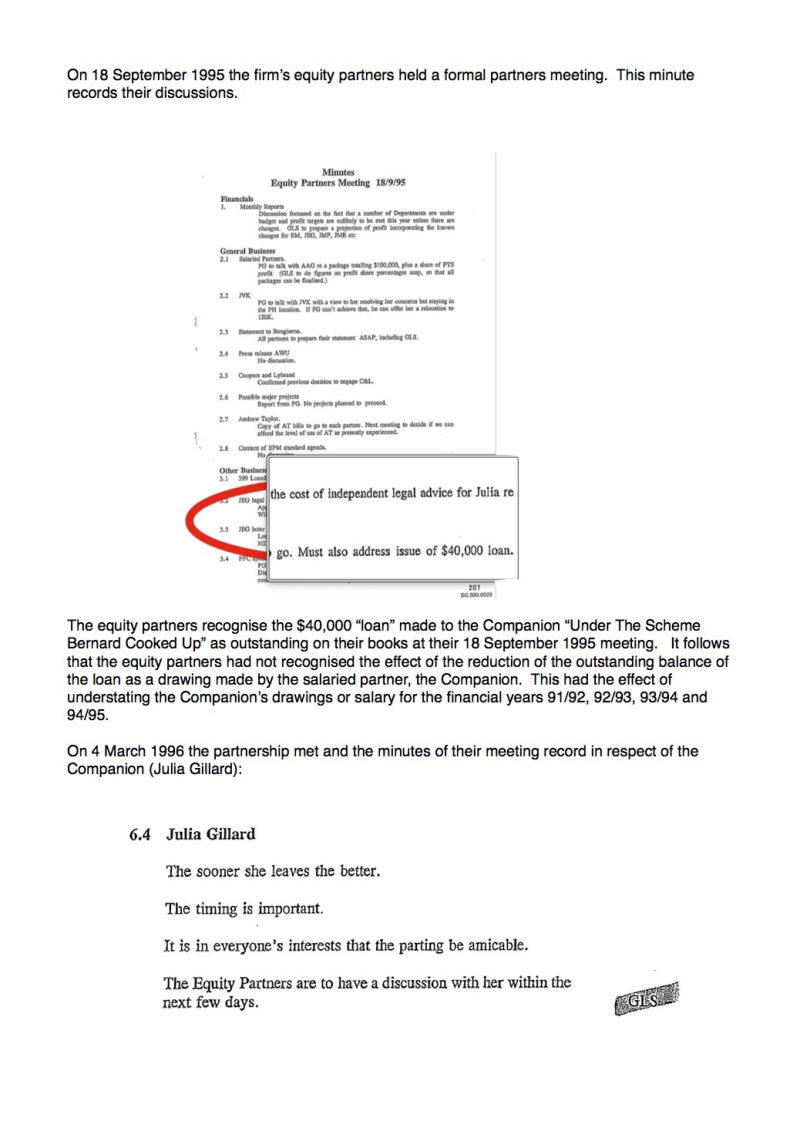 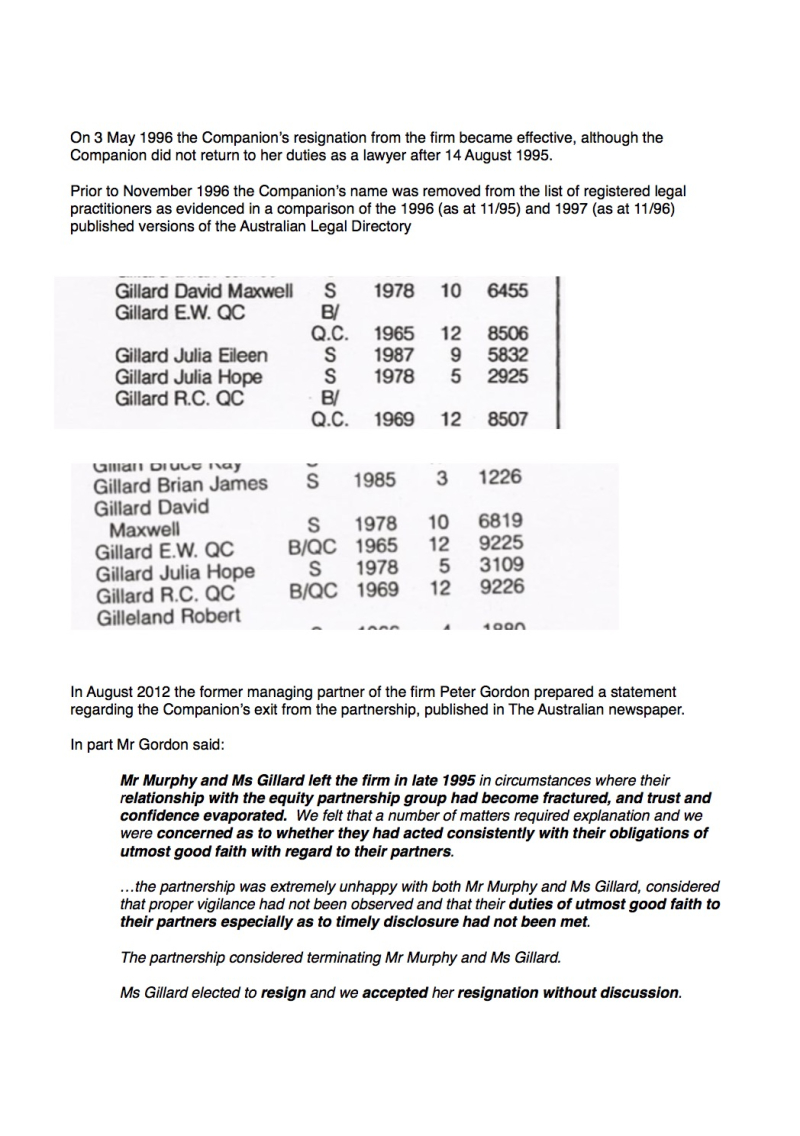 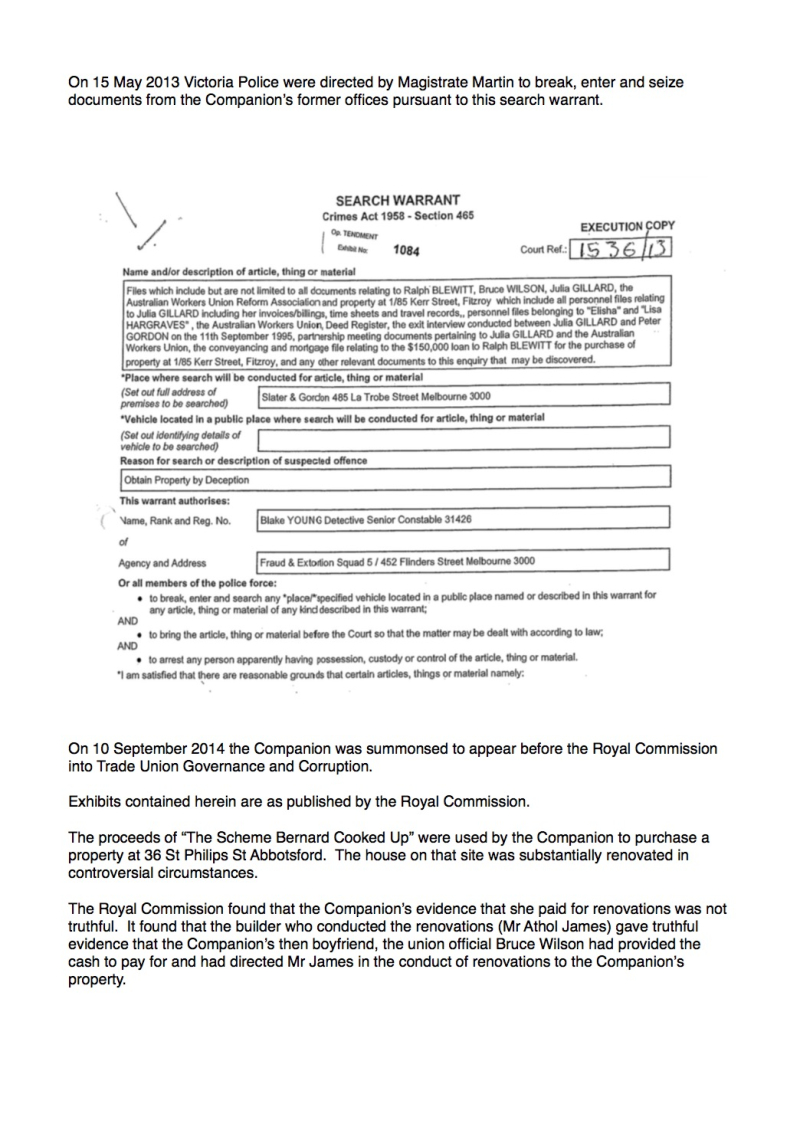 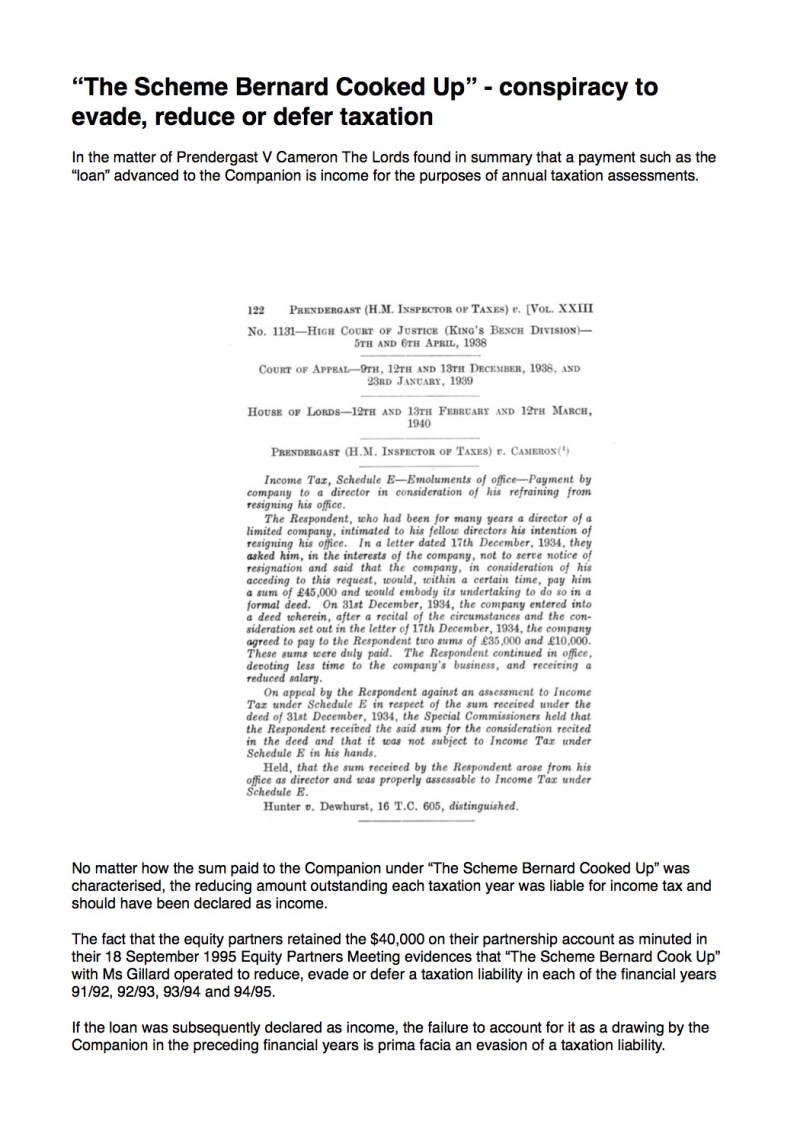 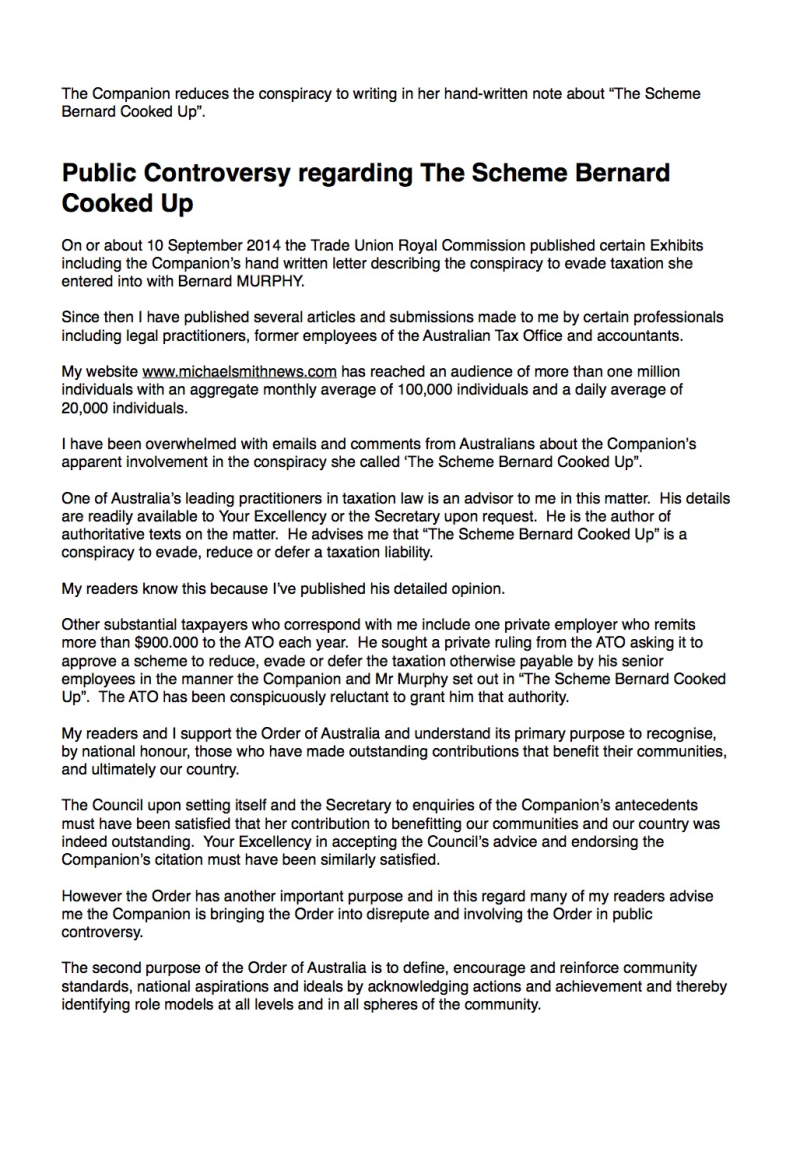 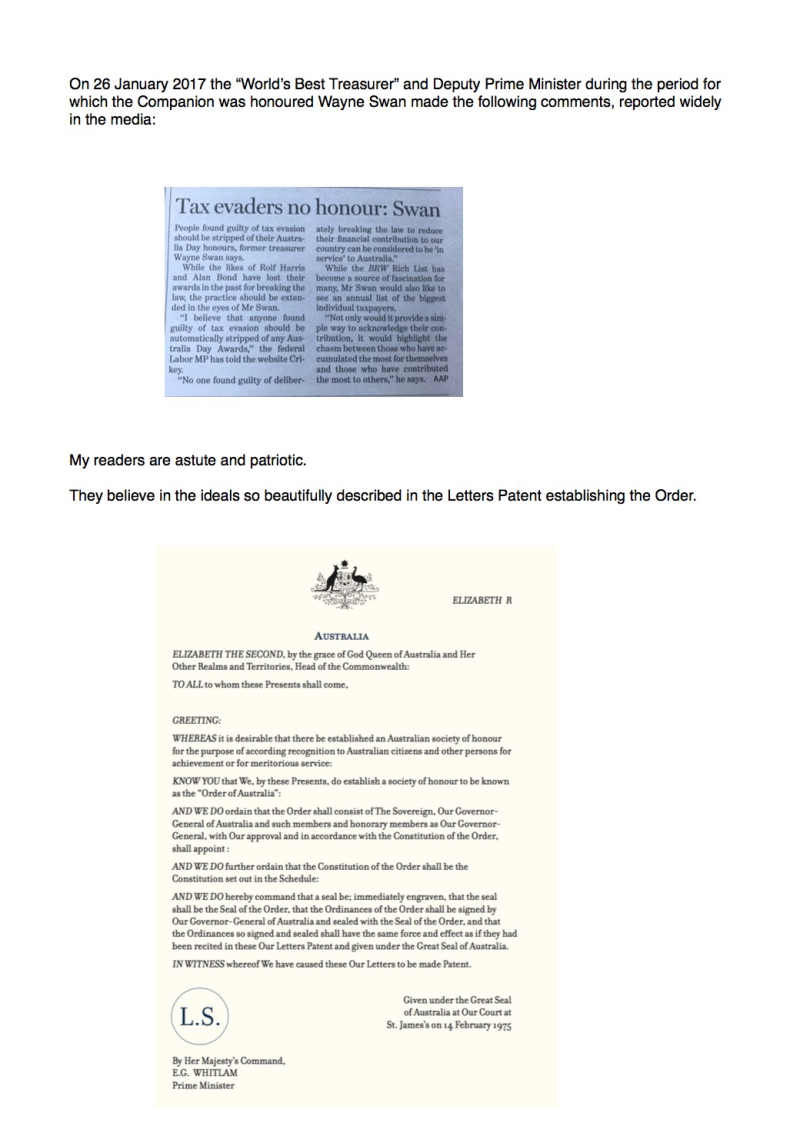 The Chairman of the Board with Monday inspiration

Weighing the cases for and against GILLARD If she had failed to notice these matters, she would have been careless.

If she deliberately ignored the matters described, she was party to Ralph Blewitt’s deceit.

"Bruce, I got a new client today."

"The imbecile.  You know, the sexist pig, the liar - it's Ralph, the bloke who reports to you. He came to see me separately in his personal capacity to instruct me on creating a separate legal entity in the name of the AWU.   He wants to be the person who'll be responsible for your slush fund if anything goes wrong."

"Oh that's big of him.  Thanks for letting me know.  Now stop stealing the doona and get your contacts out of me beer".

The AWU frauds involve more than $1M in today's value.

There are plenty of records.

All we need now are indictments and a jury.

Yesterday StephenJ dropped us a note on how the court will weigh the two cases - the prosecution's and "I did nothing wrong".

It is well worth reading in relation to the inferences to be drawn about Gillard's knowledge.

1.Evidence is weighed not according to its intrinsic worth in isolation.

2.It is weighed as part of the whole body of evidence.

3.Part of this involves a matching of the two cases. Prosecution and defence.

4. In doing this the powers and access to information of the parties is a factor.

5.In the great proportion of criminal trials no direct proof of the crime can be given.

6.If a conclusion of guilt is available and no (convincing) explanation or contradiction is offered a guilty verdict is available.

7. Re the extract on page 55 about denial and explanations re allegations - how many times has Gillards story changed? Recognition of conscious guilt?

"what is revealed when an unsatisfactory attempt is made to contradict or explain, may bridge, or help bridge, the gap between what is, and what is not, positively and explicitly revealed by the evidence." Eg the "election slush fund" excuse can not survive any reasonable examination; the failure to refer to ministerial approval anywhere (interview , RC, press conferences, Parliament). 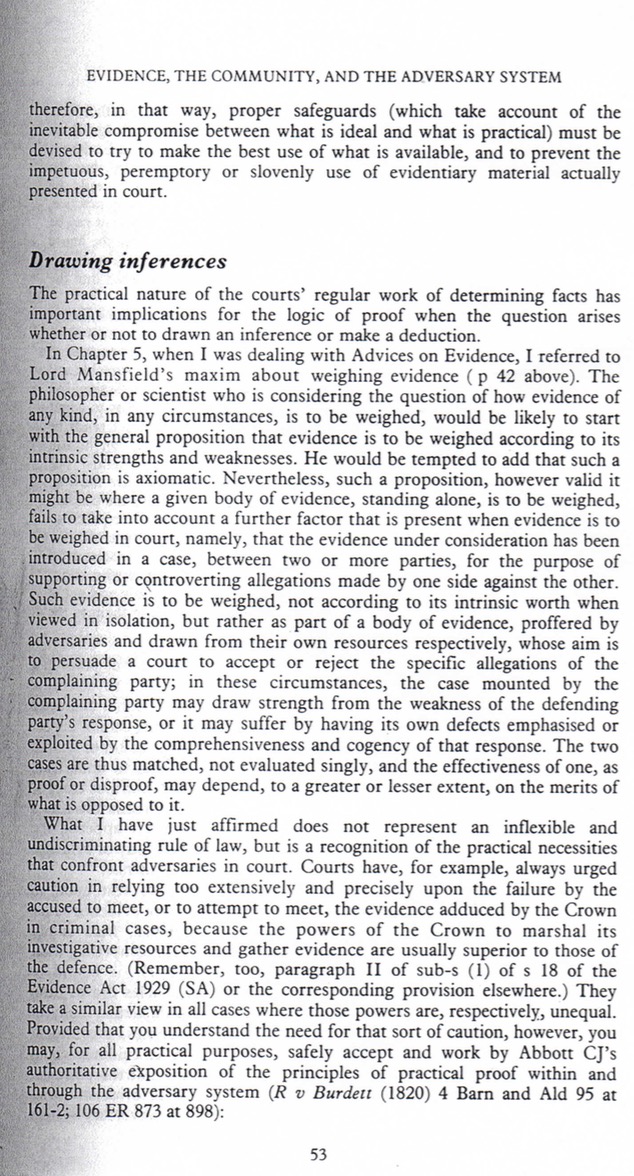 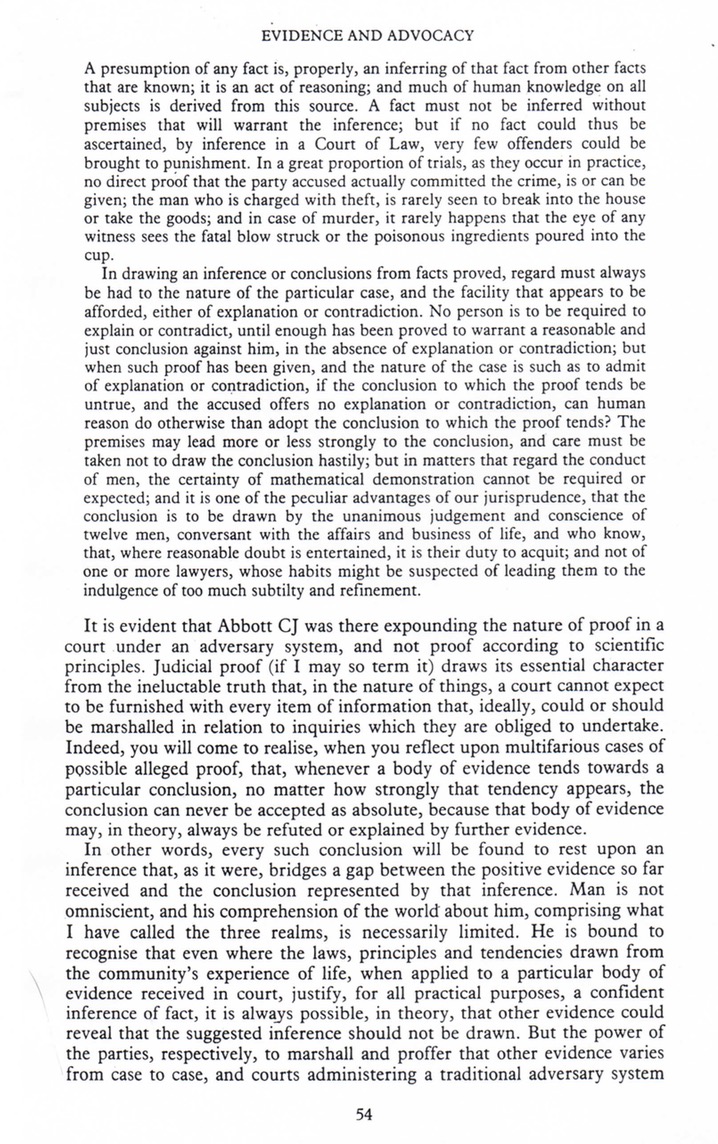 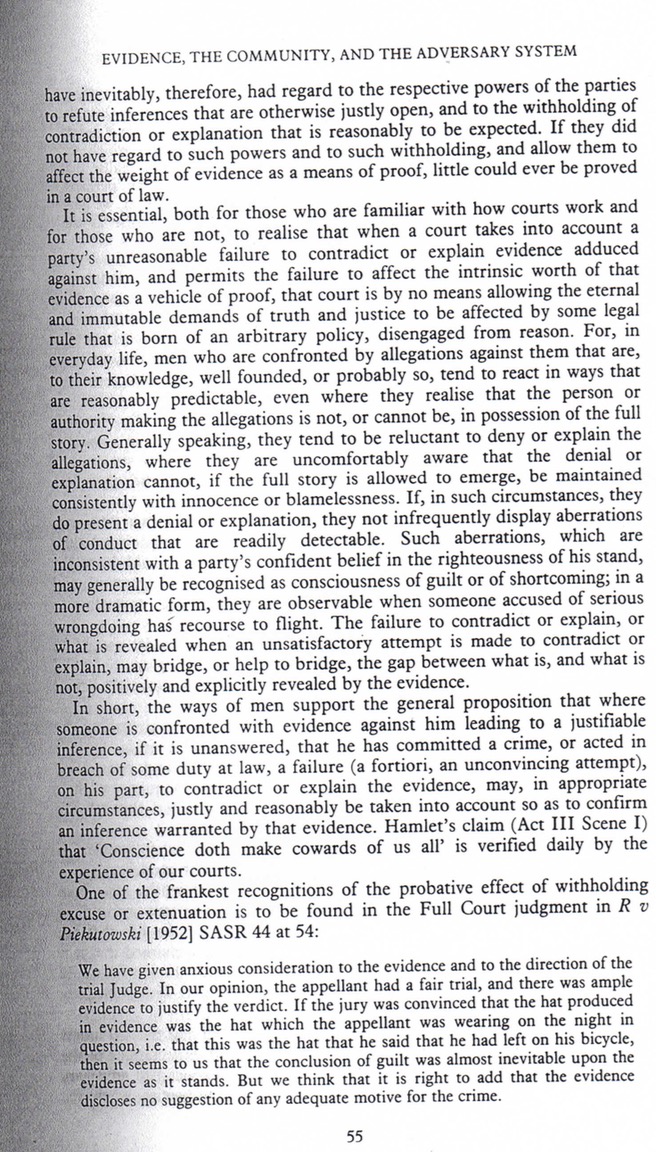 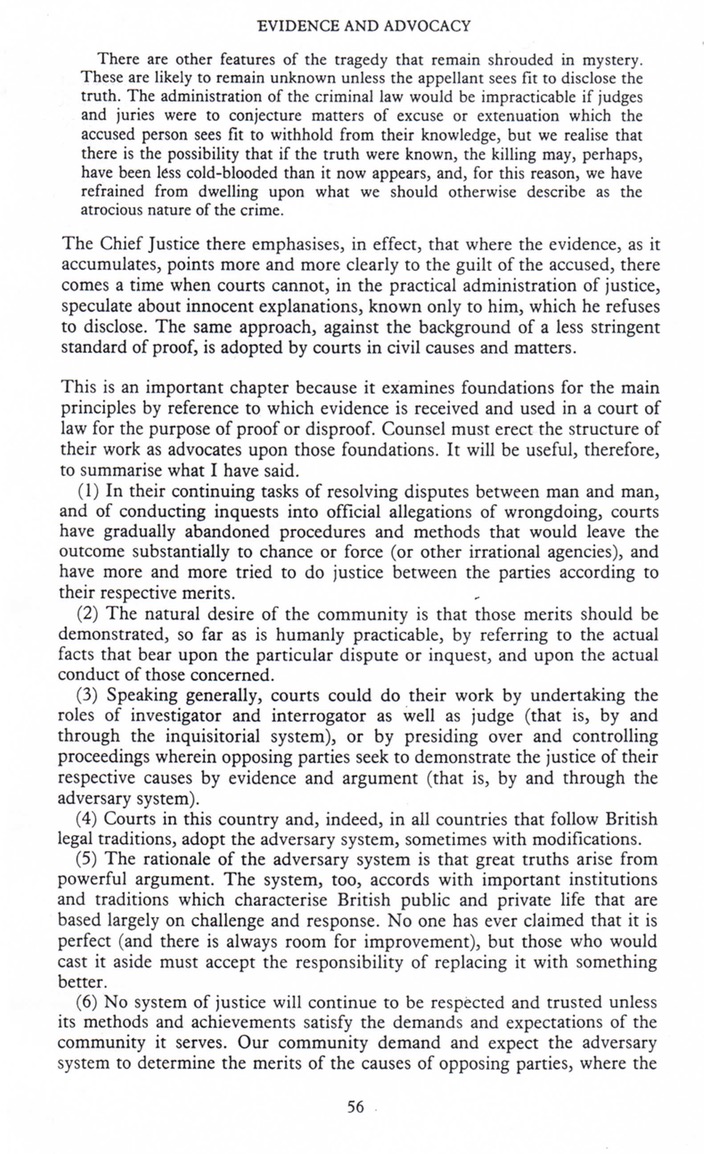 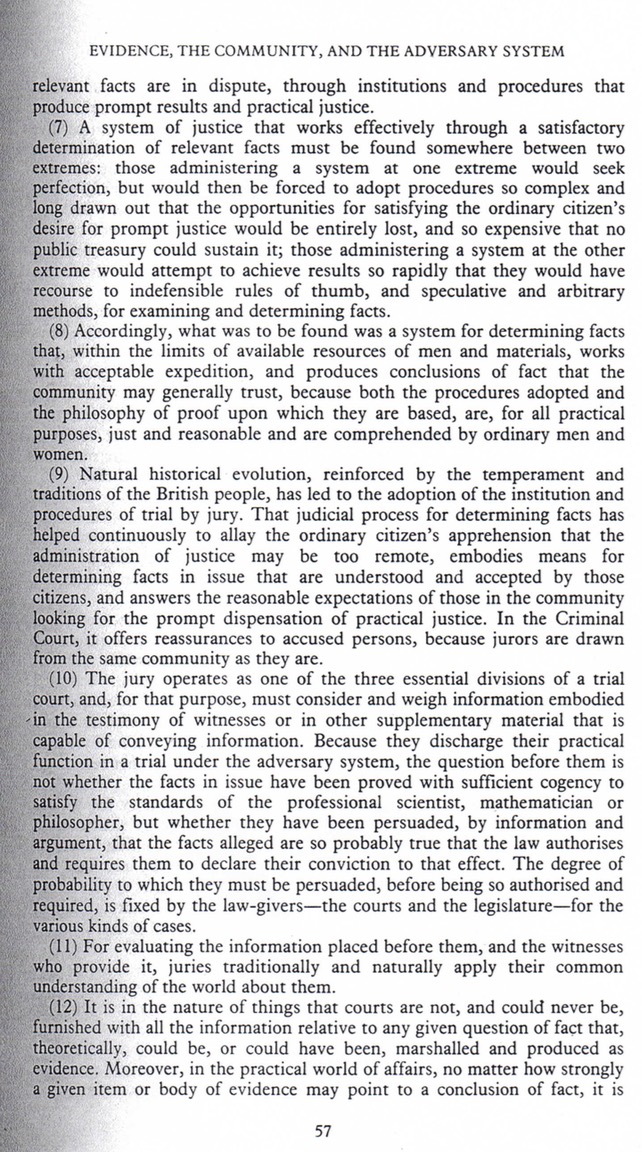 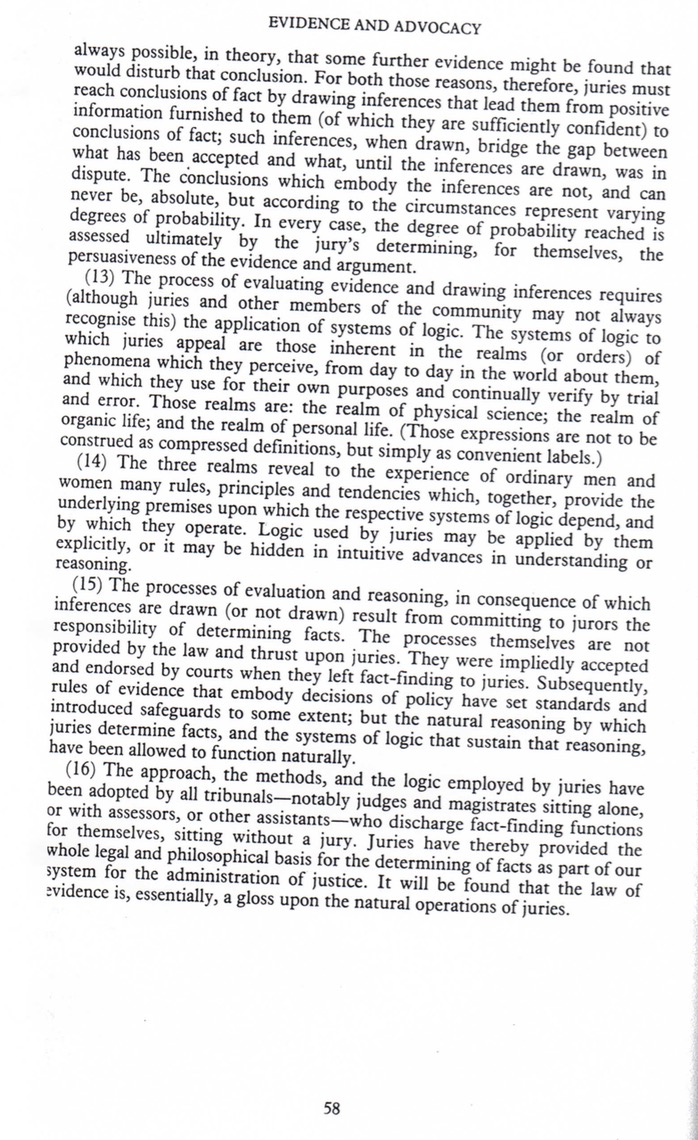 Newspoll a shocker for Mr Minus 30% Malcolm

The great Bleak has his mind right! 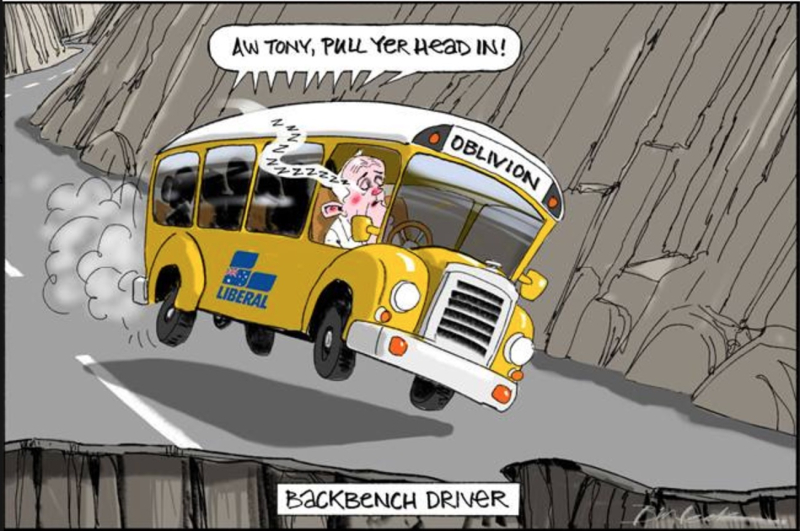 News Corp spends a lot of money on Newspoll.

Shame their journalists are so out of touch on what the results mean.

The Government of Turnbull is on the nose.

The Newspoll result is a shocker. 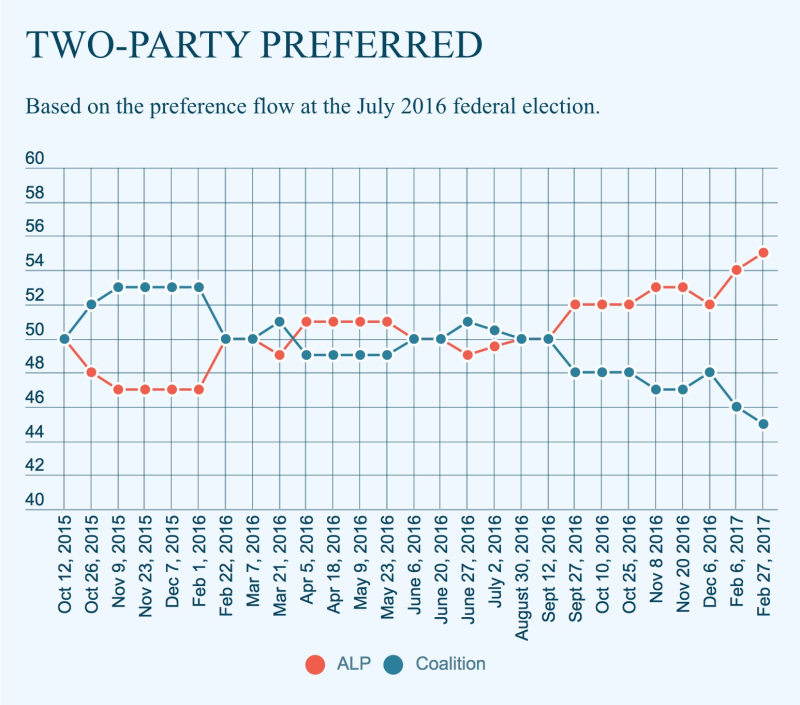 The more people get to know Turnbull the less they like him. 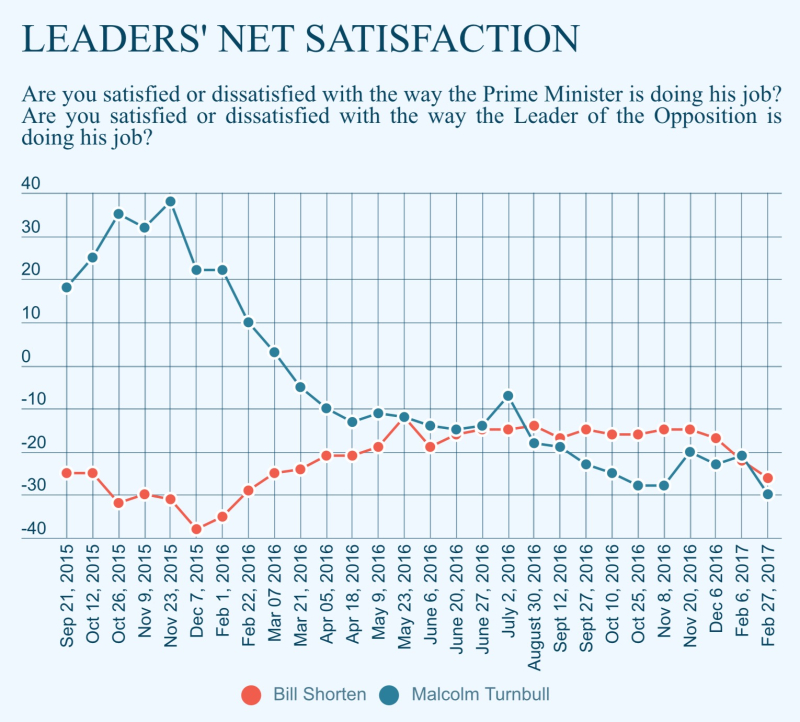 And we've all seen through him.

So what does The Australian's David Crowe focus on?  Abbott.

The Coalition has taken a battering from voters amid deepening tensions between Malcolm Turnbull and Tony Abbott, with the government trailing Labor by 45 to 55 per cent in two-party terms as the Prime Minister suffers another blow to his personal standing.

The latest Newspoll, taken exclusivel­y for The Australian, revea­ls ­a slump in the Coalition’s primary vote to 34 per cent, five points lower than in the weeks before­ Mr Turnbull toppled Mr Abbott as prime minister.

Disaffected voters have driven Pauline Hanson’s One Nation to 10 per cent of the primary vote, more than doubling that party’s support since November, as its leader seeks to echo Donald Trump’s appeal to conservatives.

After days of dispute over Mr Abbott’s call for a shift in government direction and a political fight over a Fair Work Commission decisi­on to cut Sunday and public holiday penalty rates, more voters have deserted the Coalition in favour of Labor and One Nation.

Labor’s commanding lead in two-party terms is its strongest resul­t since the outbreak of Coal­ition disunity in early 2015, when Mr Abbott faced a spill motion in the Liberal partyroom but Mr Turnbull declined to launch an outright challenge.

Mr Turnbull retains his lead over Bill Shorten as preferred prime minister but is being marked down personally, with voter satisfaction with his perform­ance tumbling from 33 to 29 per cent since the previous Newspoll, three weeks ago.

Finance Minister Mathias Cormann vented his frustration with Mr Abbott yesterday, saying his public call for a change in the government’s direction was “deliberately destruct­ive” and “com­plete­ly unhelpfu­l” to the Coalition’s cause. “I can’t see any scenario in which Tony Abbott would return to the leadership,” Senator Cormann said.

This is the eighth consecutive Newspoll where the Coalition has trailed Labor and the worst result for Mr Turnbull since he sought the leadership in September 2015, when he warned his colleagues that the government had lost 30 Newspolls in a row and that voters had “made up their mind” about Mr Abbott’s leadership.

Mr Turnbull’s satisfaction rating of 29 per cent is now one point below that of Mr Abbott at the time of the leadership spill.