That'll do me.
seeker of truth said:
Yassmin is one big liar with her not knowing the significance of the words "Lest We Forget". From the Dept of Foreign Affairs website re Council for Australian-Arab Relations - "Ms Abdel-Magied has served as a member of the Australian Multicultural Council, Federal ANZAC Centenary Commemoration Youth Working Group and the 2014 Youth G20 Summit" http://dfat.gov.au/people-to-people/foundations-councils-institutes/caar/management/Pages/yassmin-abdel-magied.aspx So she has worked as a member of the Federal ANZAC Centenary Youth Working Group and she doesn't know the significance of the words "Lest We Forget". Pull the other one, Yassmin. She uses it in her bio when promoting herself for speaking engagements. The fact that she was on this ANZAC Centenary Youth Working Group is everywhere with Google searches. She deserves the chop from the ABC and any paid government job. What a low life, especially with her denial.
ENDS
UPDATE - COMMENT FROM SENATOR ERIC ABETZ

The following comments can be attributed to Senator the Hon. Eric Abetz:

"Tens of thousands of Australians, from all walks of life, have gone to war and paid the ultimate sacrifice. Today, we pay tribute to them - not seek to use their sacrifice for cheap political point scoring as Ms Abdel Magied has done."

"The freedom she enjoys to make such disrespectful comments is what the people whom we commemorate today fought and died for. But that is where self-discipline, respect and decency need to be added into the equation, something Ms Abdel Magied has displayed she lacks."

Trump is said to seek cutting the corporate tax rate to 15% https://t.co/gEWZ0xtuDH 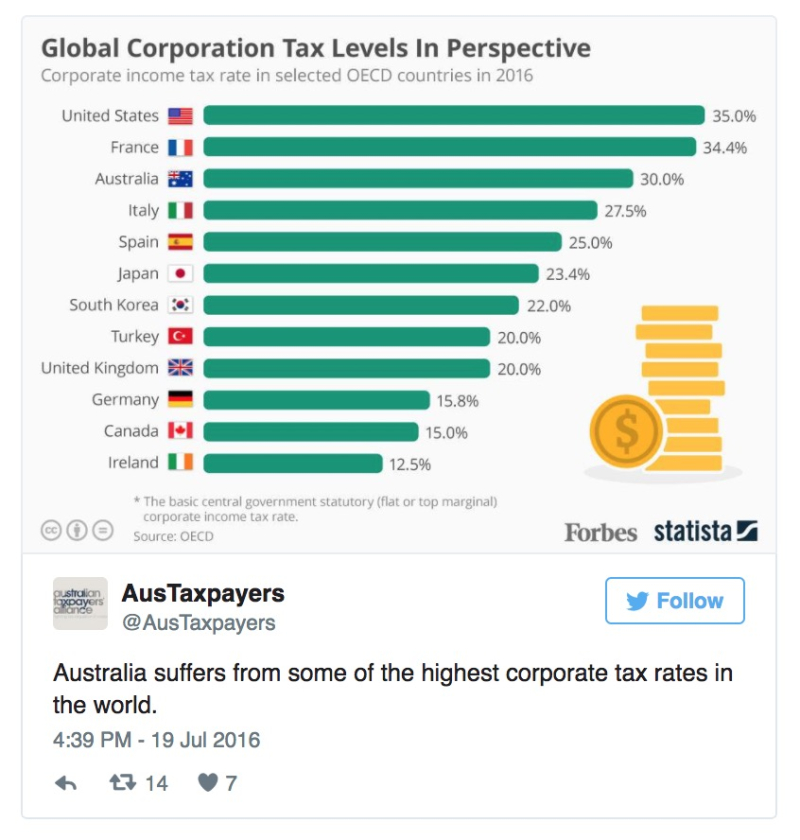 The LNP's plan for company tax is:

The company tax rate will be progressively lowered to 25 per cent by 2026-27 for all companies. 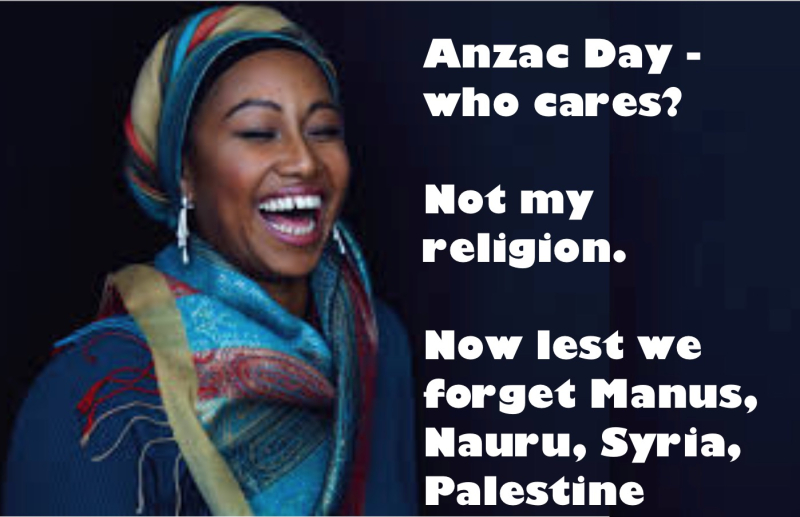 SBS sacked a bloke for disrespect towards Anzac Day. 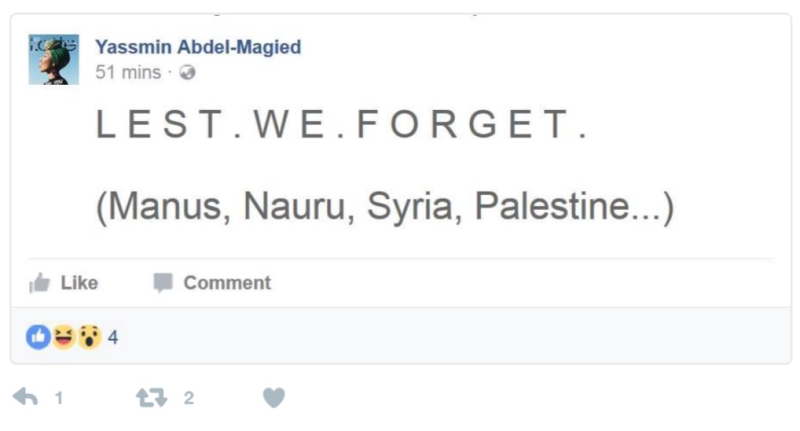 How could you live in Australia, grow up in Australia, be educated by and paid for by Australia and not know the significance of the phrase Lest We Forget - and the immense offence misusing it causes to the families of our glorious dead.

After public outrage Ms Magied has issued an apology and removed the offensive words, she claims that she needed to have it brought to her attention that her publication was offensive.

I wish I could respect this bloke - particularly on occasions like this.

Turnbull is in the Middle-East Afghanistan in search of poll numbers.

It has been an honour to meet the servicemen and women in the Middle East, to thank the Anzacs of today for their service. pic.twitter.com/MrkGH1f6AZ

Sky News reported the $110M gift of our money to Iraq here http://www.skynews.com.au/news/top-stories/2017/04/25/pm-makes-anzac-visit-to-afghanistan--iraq.html

We will remember... thank you to those who came before us and to those who continue to defend us... freedom is not free 🇦🇺lest we forget... pic.twitter.com/RJhjGVPbBC

I'm a long way from home and today for the first time I'm watching the Dawn Service live from Sydney on the ABC TV online feed rather than attending in person.

The ABC is doing a great job, it's very moving to be so far away - yet to feel involved and a part of proceedings as they're happening.

Thank you to the ABC for doing it so well and respectfully. 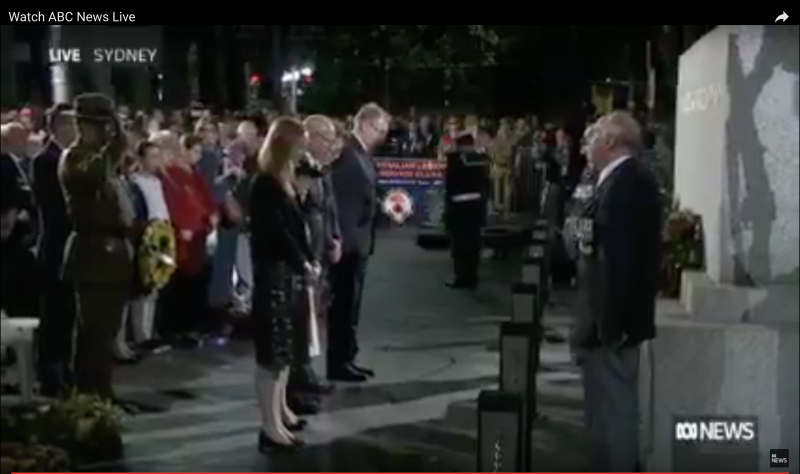 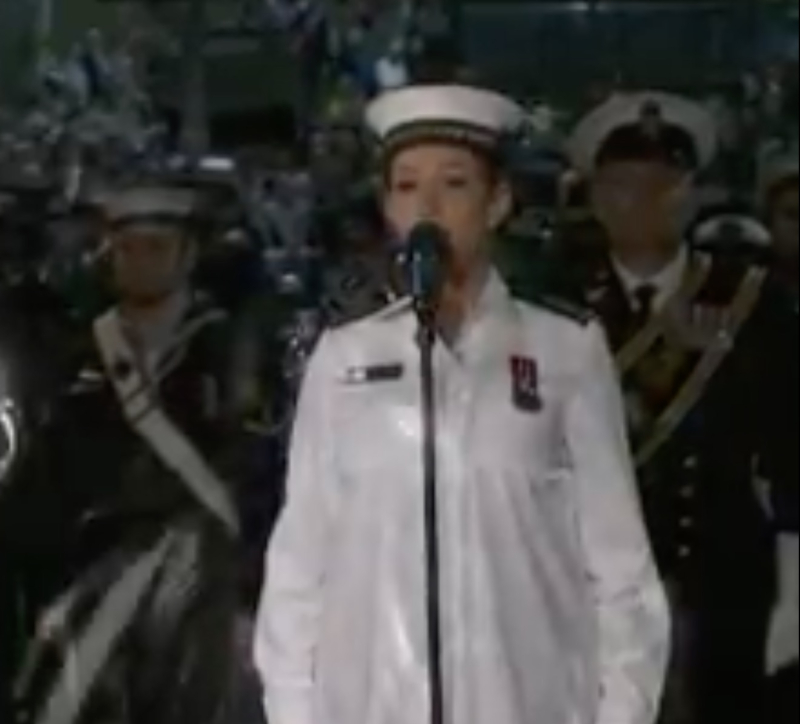 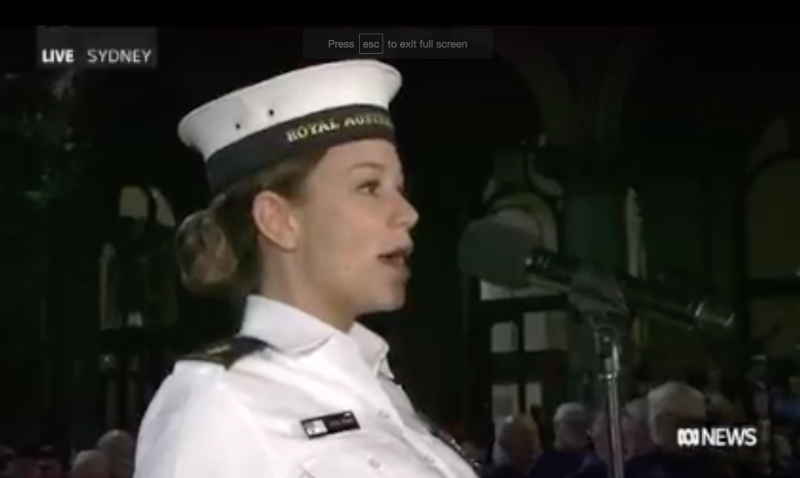 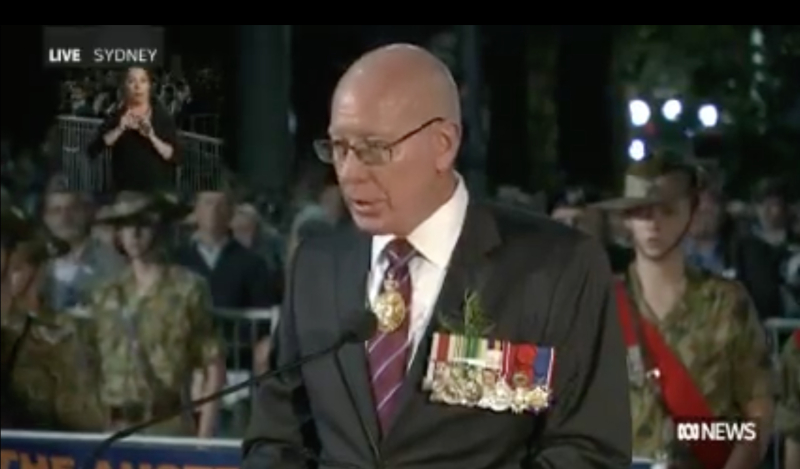 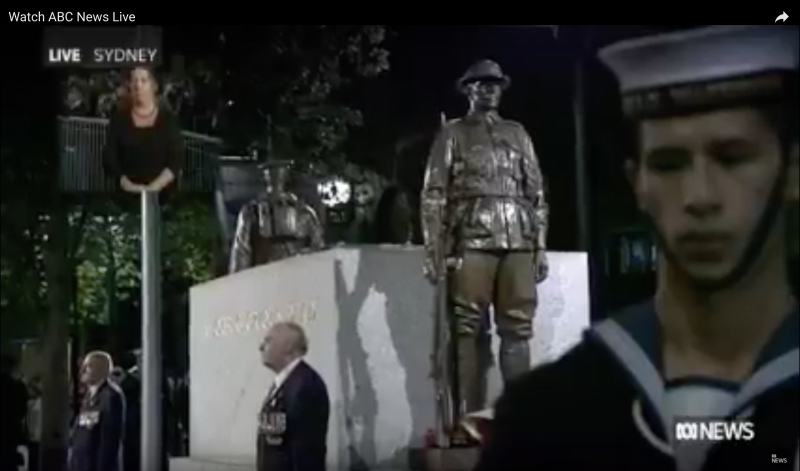 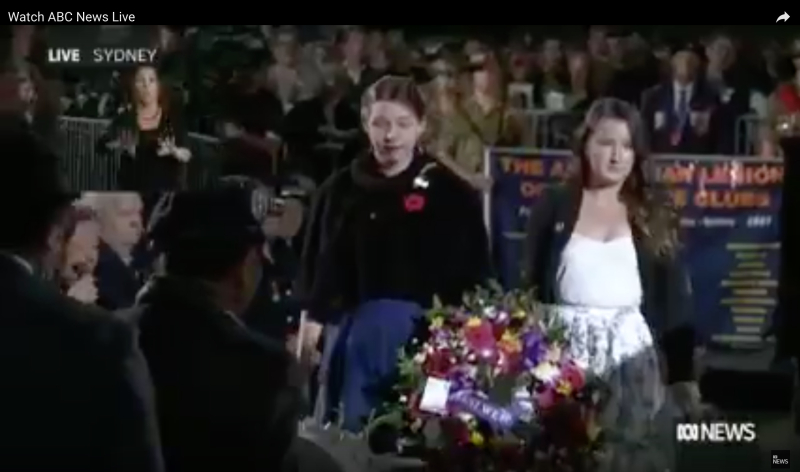 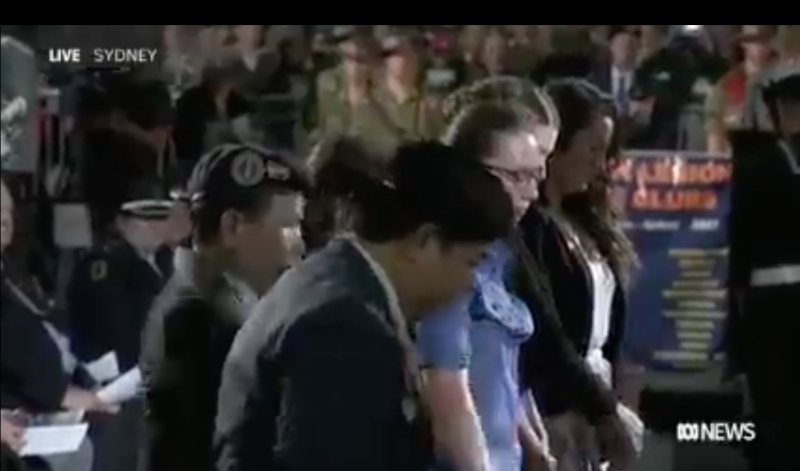 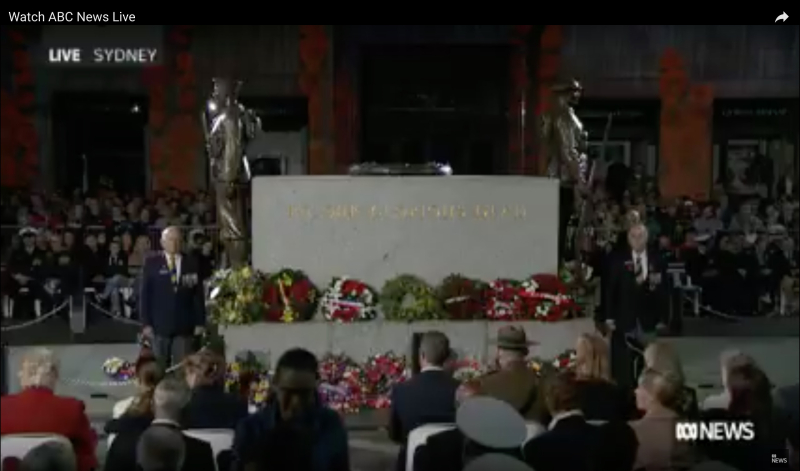 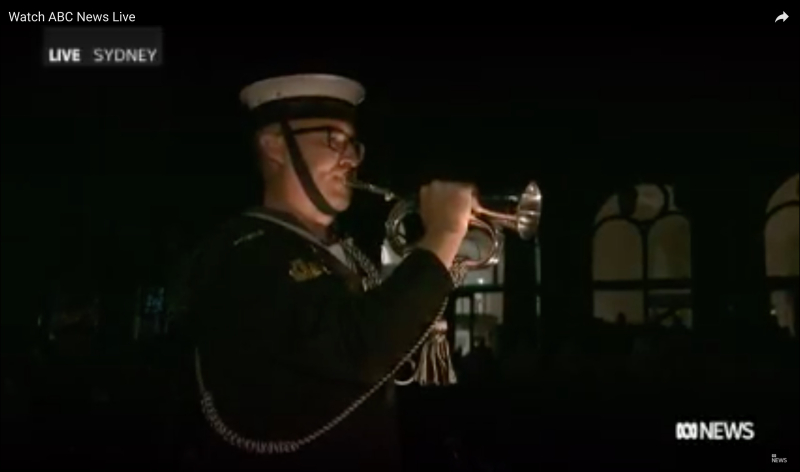 As I write (0530 Sydney time) the ABC is crossing to the Australian War Memorial - you can follow their Anzac Day coverage here.

Anzac Day - a bit on what it means for my family

Here's my granddad Percy Leo Smith and his brothers Leslie John and Gerald Peter Smith.   The boys somehow managed to get leave in the Christmas of 1917 an they met up in London - grandad and Les from the 3rd Division on the Western Front in France, and Gerald from HMAS Warrego based at Brindisi in Italy.   They had a singular mission - to get a photo all together for my great grandma Catherine Smith, then widowed, who was waiting in Sherwood Street Richmond for her boys to come home.   Les and Grandpa had already been wounded, Les seriously, you'll see his wound stripe and the scar from the Gun Shot Wound to Face Penetrating Eye that's recorded on his war service record.   A few weeks later he was shot and killed in action in the German's Michael Offensive on 30 March 1918. 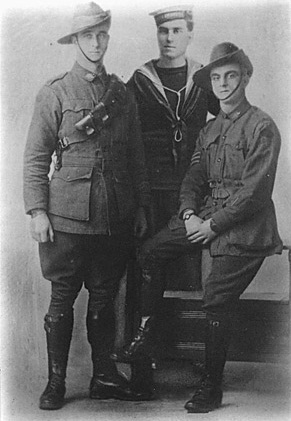 When my great grandma received a note from the War Memorial some years later for Les's notations on the Roll of Honour, here's what she wrote about her boy. 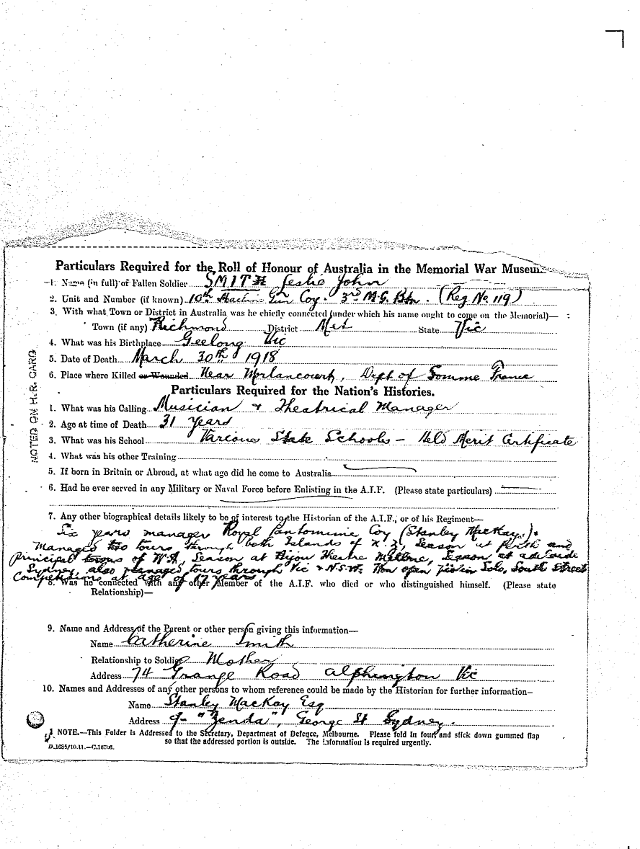 My dad Geoff was one of 11 surviving children of Percy Leo and Myrene Smith.   Dad's brother Jack was in the tail end of the New Guinea campaign in WW2 and Leo was in the RAR as an infantryman who saw active service in Korea.   My dad was a nasho, an artilleryman at Holsworthy.

Dad's brother Les married Nancy Ryan of Bibbenluke, near Bombala.   When I was a kid we'd holiday at her family's place at Bibbenluke and I was fascinated by her dad George Claude RYAN MM who'd never drove a car and had draught horses all his life to help people caught on the ford that floods a bit at Bibbenluke.  Claude had a distate for machines after seeing machine guns up close for too long.   He won the Military Medal for cleaning up some Germans in an entrenched machine gun nest, they killed a lot of Claude's mates you see.

Claude signed up in Bibbenluke with Olive Allen's boy Les.   Olive Allen was still around at Bibbenluke when I was very little.   Les didn't come home from the war.   Last night I recorded this poem as I drove home.   I always get a bit wistful near Anzac Day, it means a lot to me to remember them. 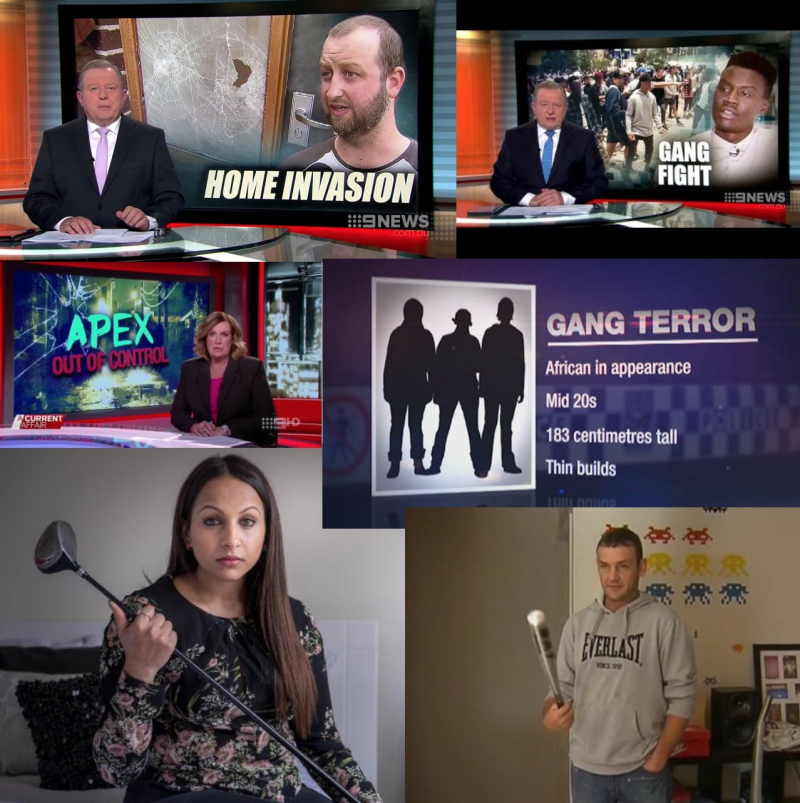 What have we come to?

The RACV issues home/contents insurance - and in Victoria the big issue facing it is home invasions.

For a homeowner, it's potentially life and death.

This article reports 10 aggravated burglaries per day in Victoria, 3,500 per year - and the number grew by 40% last year! 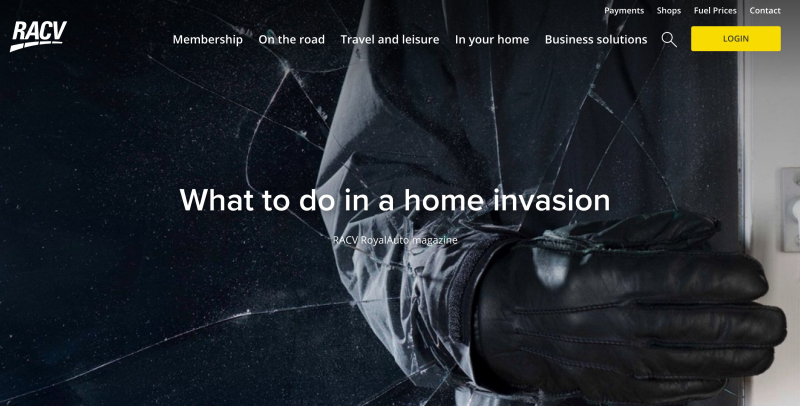 It is 5am in the suburbs. Suddenly there is a fearsome thumping on your front door. You rush to open it, thinking there must be some sort of emergency.

There certainly is: Three or four teenagers burst inside, wielding weapons, screaming “Where’s your car keys?” For five terrifying minutes they rampage through your home, snatching up your valuables, before driving off in your new car.

Welcome to the new and growing trend in theft and burglary – home invasion.

The rate of home invasions has soared over the last year. Crime Statistics Agency data for 2016 has shown an overall 10 per cent increase in home burglaries – but aggravated burglaries have almost doubled.

At a time when violent crime is steadily declining, that’s an alarming trend, says RACV Home Services and Security Manager Aaron Flavell. The RACV has worked closely with Victoria Police to get insights into home invasions and find ways for our members to avoid being victims.

Home invasions happen all over Melbourne and are not restricted to one area, despite reports of a number of incidents in the south-east. These “aggravated” incidents are very different to simple burglaries and much more dangerous to home occupiers who are present when they occur.

Home invasion is often perpetrated by groups of youths who can be as young as 15. Their motivation is often thrill-seeking as much as material gain.

“Much of this becomes a sort of game for these people, who often meet on social media,” says Mr Flavell. “So they ‘gang up’ and go do these things. It’s almost like there’s a ‘gangification’ element involved and a hero factor. It’s thrill-seeking and status.”

The rise in home invasion is largely driven by the difficulty of stealing modern cars fitted with immobilisers. The only way to get them is to break into a house and take – or demand – them. At the same time, perpetrators grab easily available cash, electronic goods or jewellery.

Their behaviour is volatile and unpredictable and they may use violence for the fun of it. They are not afraid and are undeterred by the presence of people.

So what should we do? The first thing, says Mr Flavell, is to keep the threat in perspective. You are extremely unlikely to be a victim, but there are steps you can take.

Don't be a target

The first is to reduce the risk of being targeted: “Don’t create hiding spots in your front yard, light the place up. What the crims hate is that visibility, they’re always looking for the dark and shady.

“Always park your car in the garage if you have one. Use perimeter hardening, as the police call it. You effectively make your place harder to get into with security doors, shutters, good locks and so on.

“Invest in an alarm or CCTV – or get a big dog; there are studies that show a big dog, barking away, is just as effective as an alarm system.”

And if someone does get in? “Comply,” says Mr Flavell. “Give them what they want. Don’t engage with them. And whatever you do try to keep some space, such as keeping a table between you and them. And call for help as soon as it’s safe to do so.”

He adds: “We have 1.7 million homes in Victoria and three-and-a-half thousand aggravated burglaries. If you put that into perspective it’s a rare phenomenon.

The ABC will have live coverage of the Dawn Service tomorrow morning broadcasting around the world here - kicks off at 4.30AM Canberra time. 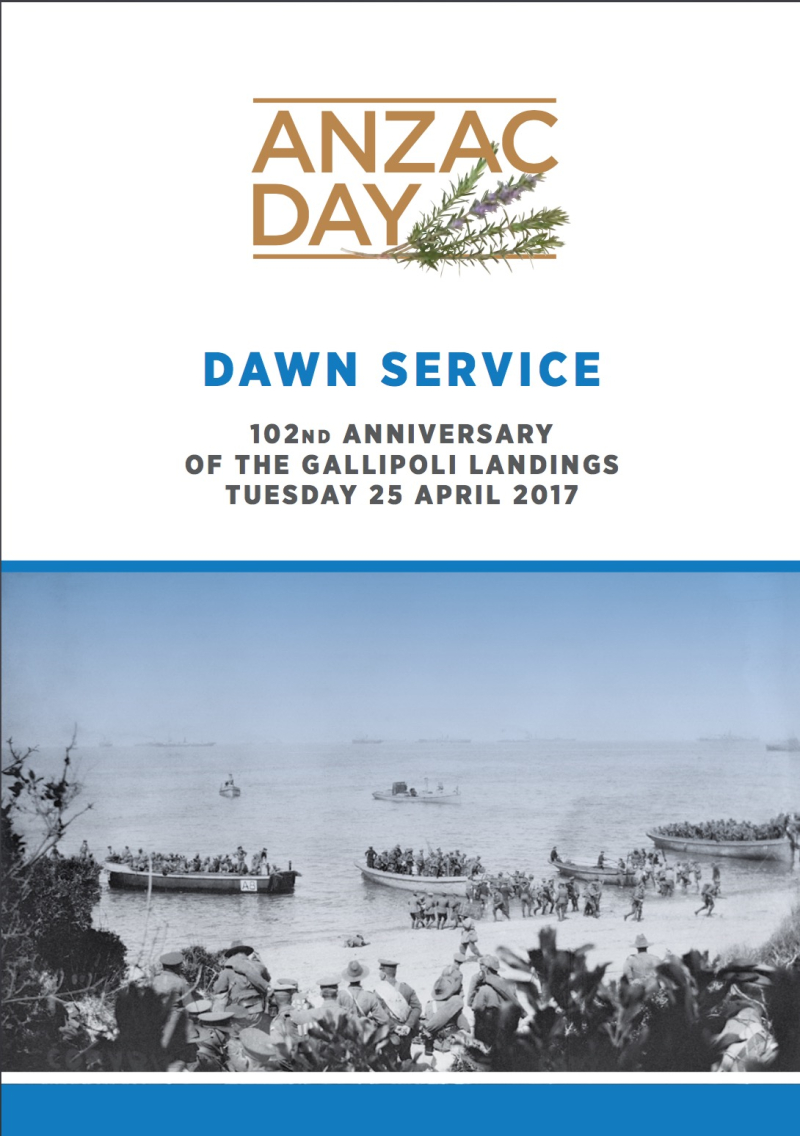 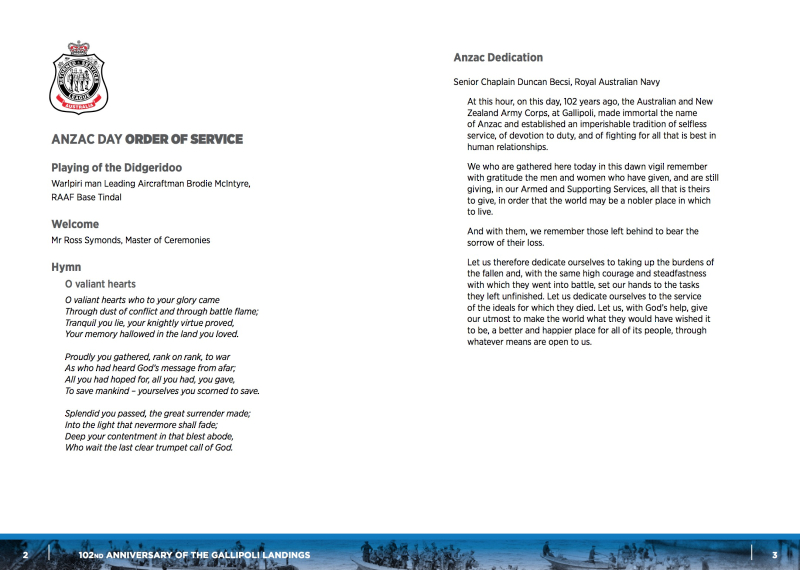 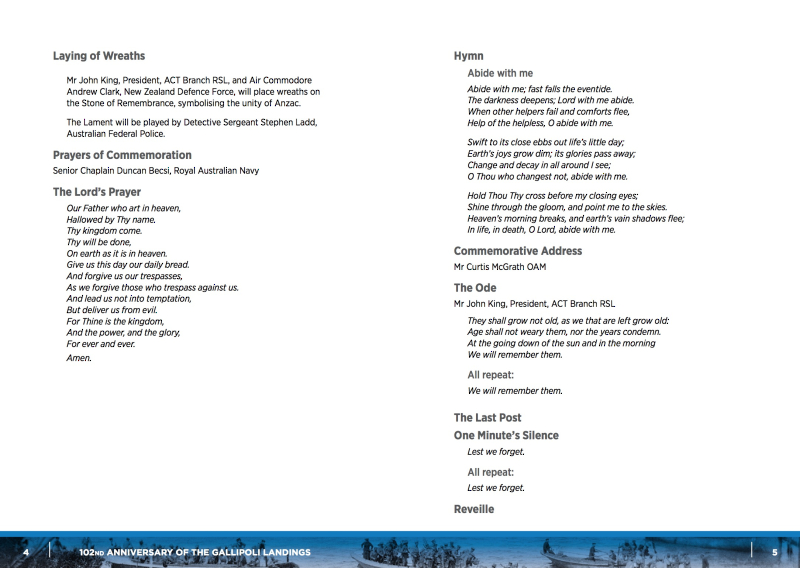 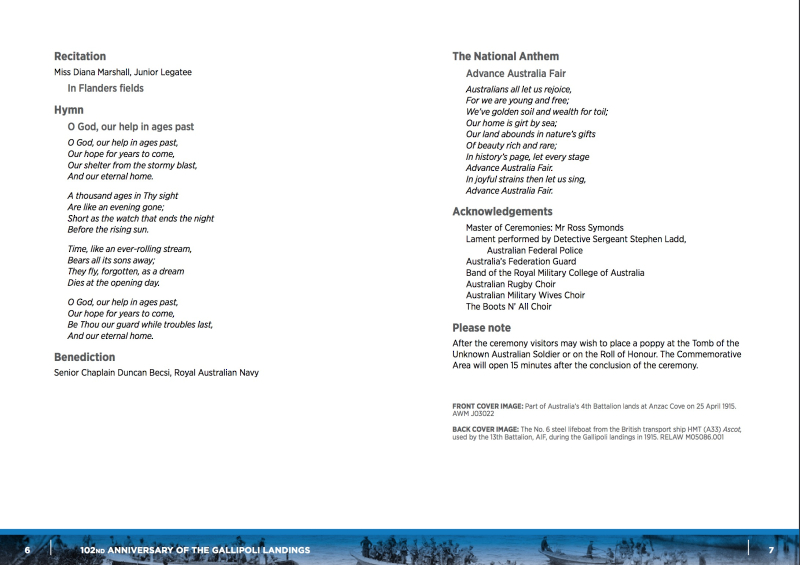 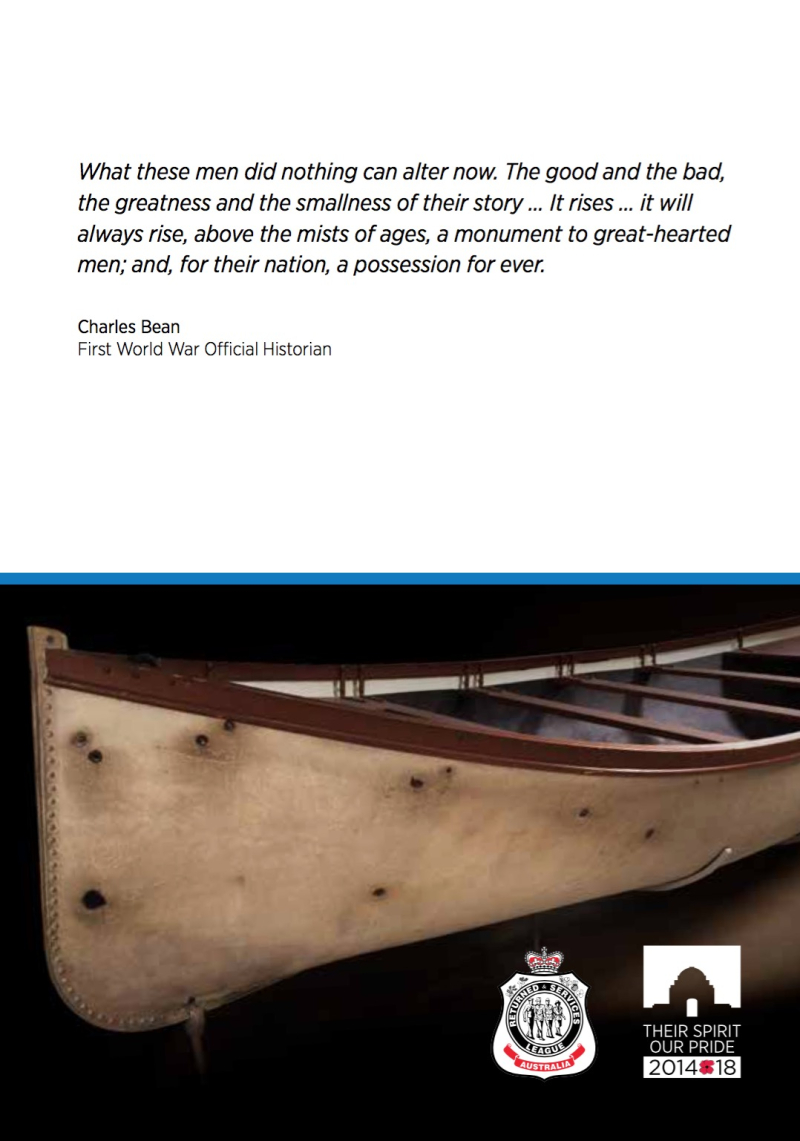 Reader John Greybeard puts context around the achievement - 1,000 days of stopping the boats

Thanks to reader John Greybeard for this insightful analysis on the scale of the achievement in hitting 1,000 days without a boat arrival.

So feel proud of your achievement particularly Jim Molan. 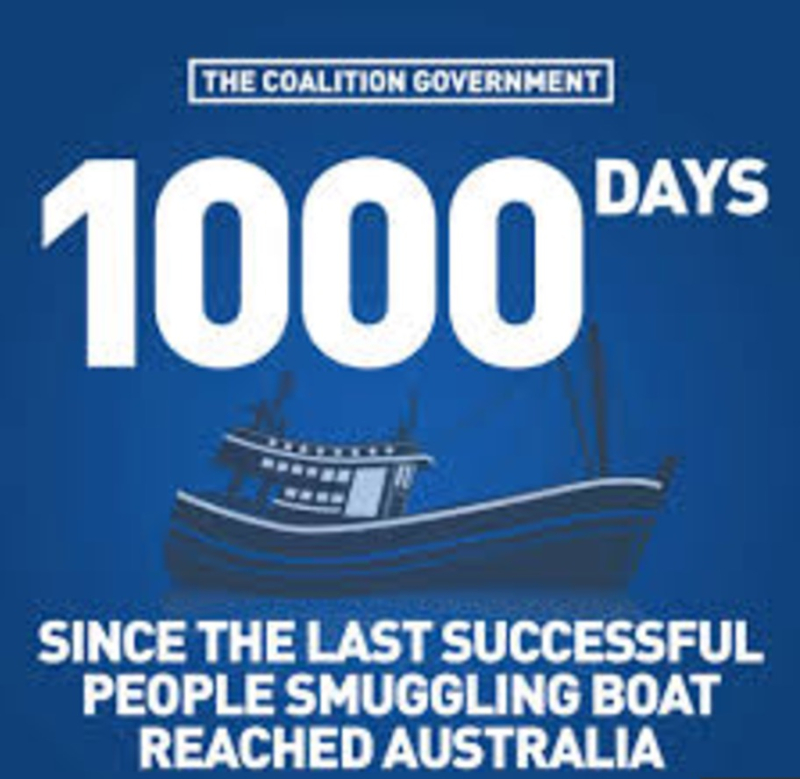 Julie Bishop gives $10M aid to Yemen. Saudi Arabia bombs it to rubble, takes no refugees - but we pay

Saudi Arabia and Iran back different sides in a bad versus bad Sunni versus Shia Middle Eastern shit-fight over who's in charge of Yemen.

And Australia?  We clean up the mess.

Can anyone explain how this is our responsibility? 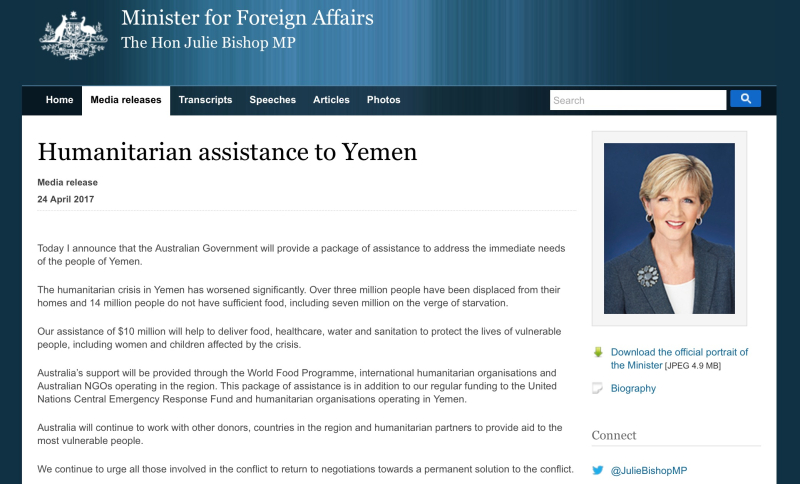