The people who gave you the compere for Crooked Hillary's Sydney speaking gig......

The makers of the world's softest one-on-one with the shoulda-been POTUS......

It's the story of the century: @realDonaldTrump and his connections to Russia. @FergusonNews' investigation starts Monday: https://t.co/JsfNxE6Q3K pic.twitter.com/NVs49GltFo

The story of the century?

No, not uncovering the DNC and Obama DoJ "get Trump" plans.

This story from the Australian taxpayer funded ABC is on board with the Democrats and their program.

3 very expensive episodes of 4Corners dedicated to believing all that the Democrats said about Trump is really true?

When do the grownups come home at the ABC?

This year Australia will give $44M in borrowed funds to these people.

In February we brought you this story about the $44M, borrowed by the Government of Turnbull so Julie Bishop's DFAT can support Palestinian objectives. 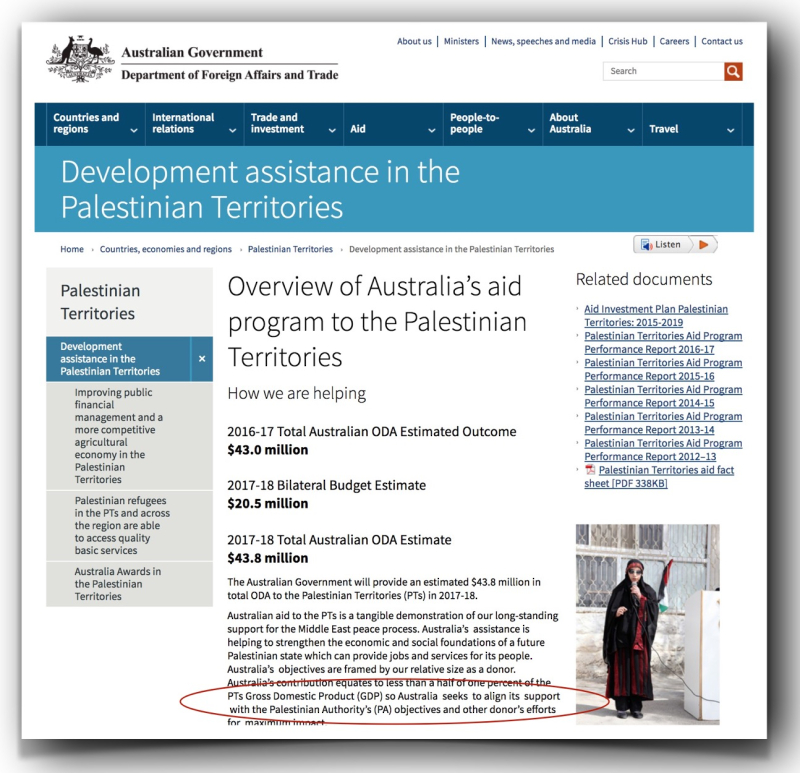 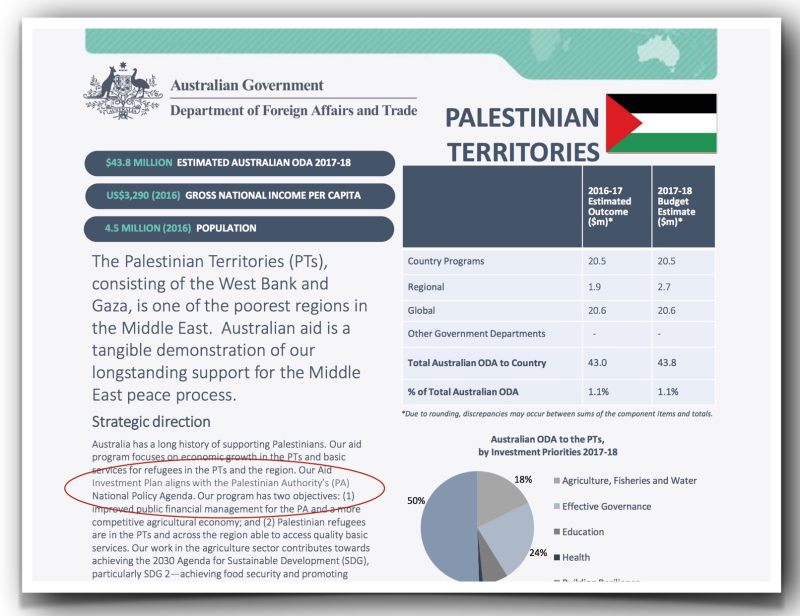 I commend this two part short film to you - it'll help to clear up what the Palestinian agenda and objectives are all about.

Behind the smoke screen ( Part 1 ) from Pierre Rehov on Vimeo.

Behind the Smokescreen Part 2 from David Adler on Vimeo.

It's now 4 weeks since we first asked Senator Michaelia Cash to explain this statement:

"Julia Gillard is a former prime minister and because of that she won't be charged". 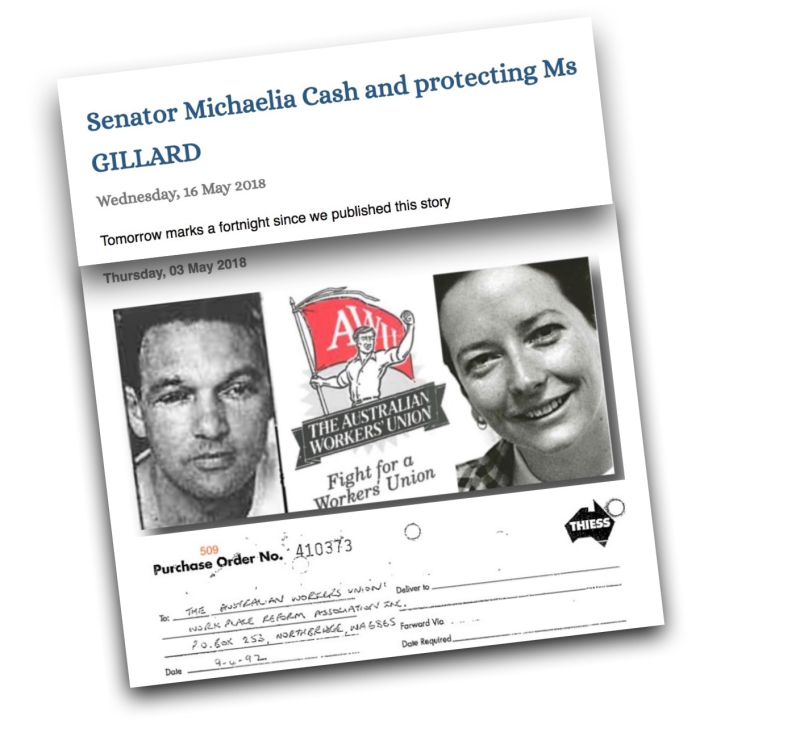 On 2 May we ran a story on corruption involving the parent company of Thiess Contractors which paid over $400,000 into the Gillard/Wilson 1990s slush fund.  At the time Ralph Blewitt was the only person facing charges over the crimes and we brought you the news:

On 25 May 2018 Ralph Blewitt will make his first appearance in the Perth District Court........  (In his trial he will) call Bruce WILSON, Julia GILLARD, Bernard MURPHY, Nick JUKES, Joe TRIO and others to the witness box -  along with documents created or authorised by them.

In that context it was worrying to hear that Minister for Jobs Senator Cash was reported to have said that Gillard wouldn't face charges because she's a former PM.

I wrote at the time:

If that is so it makes for a marked departure from our traditions of equal justice before the law.

I will today ask Minister Cash to confirm whether or not that's the government's position.

I am writing to ask for a yes or no answer. Did you say words to that effect?

By this stage dozens of readers were writing to Senator Cash.

It's now 4 weeks since our first reports - and despite her considerable ministerial staff not one of our readers has received a reply or acknowledgement from Cash's office.

Last Friday the only prosecution of charges arising from Gillard's AWU scandal was dropped.

No one is currently facing charges over The AWU Scandal - crimes involving about $1M in today's money.

And the current minister for jobs, Michaelia Cash won't respond to reports quoting her as saying that Gillard's status as a former PM protects her from charges.

She must have a lot on to leave those requests for comment at the bottom of her priority lists.

So what has the Senator been doing that's kept her too busy to explain her remarks?

She's been helping out at the West Coast Eagles. 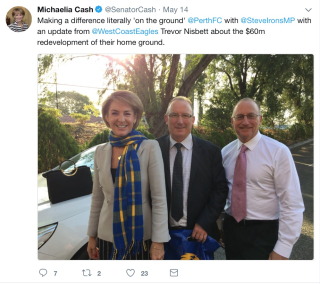 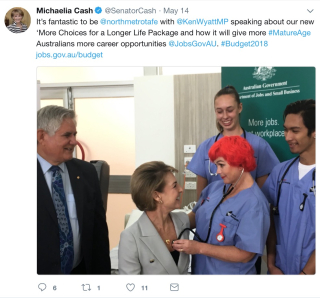 Found time for a fantastic pre-budget chat with friends. 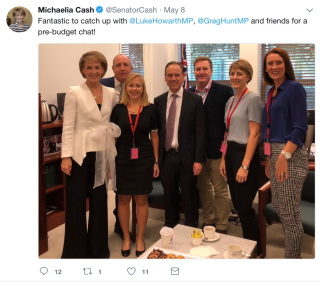 Collaborated with others to see more women. 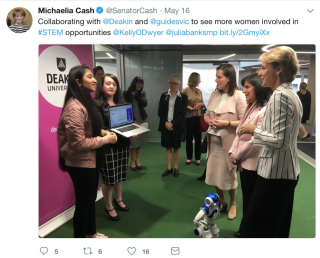 Found time to give away another $4m borrowed money. 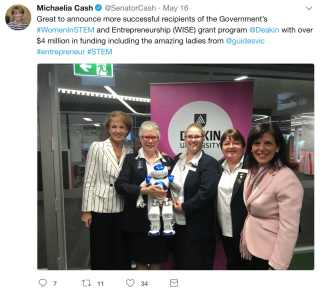 She propped up the bar with Christian Porter. 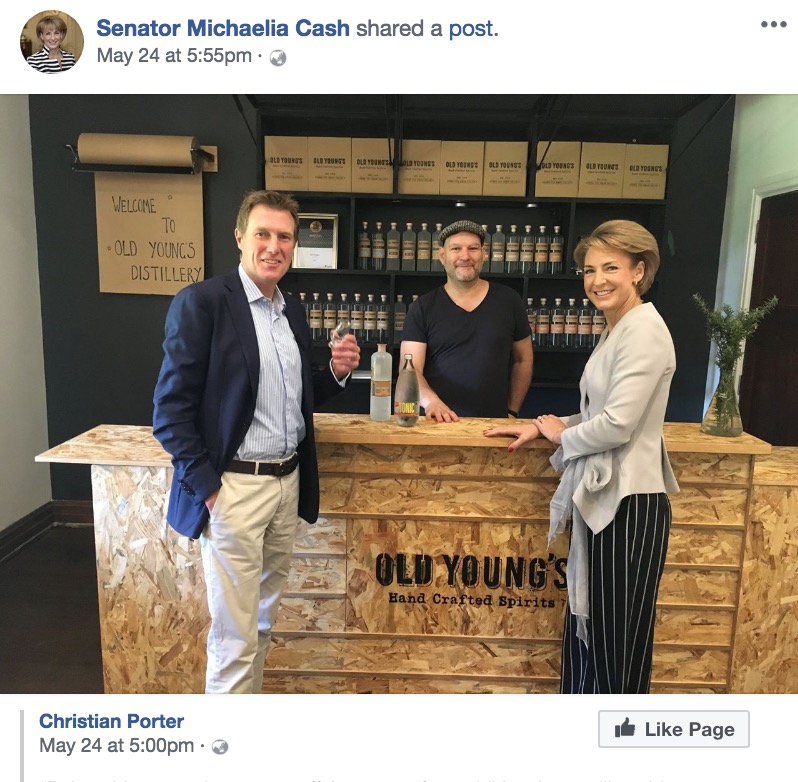 Went to the Vivid Light Show in Sydney. 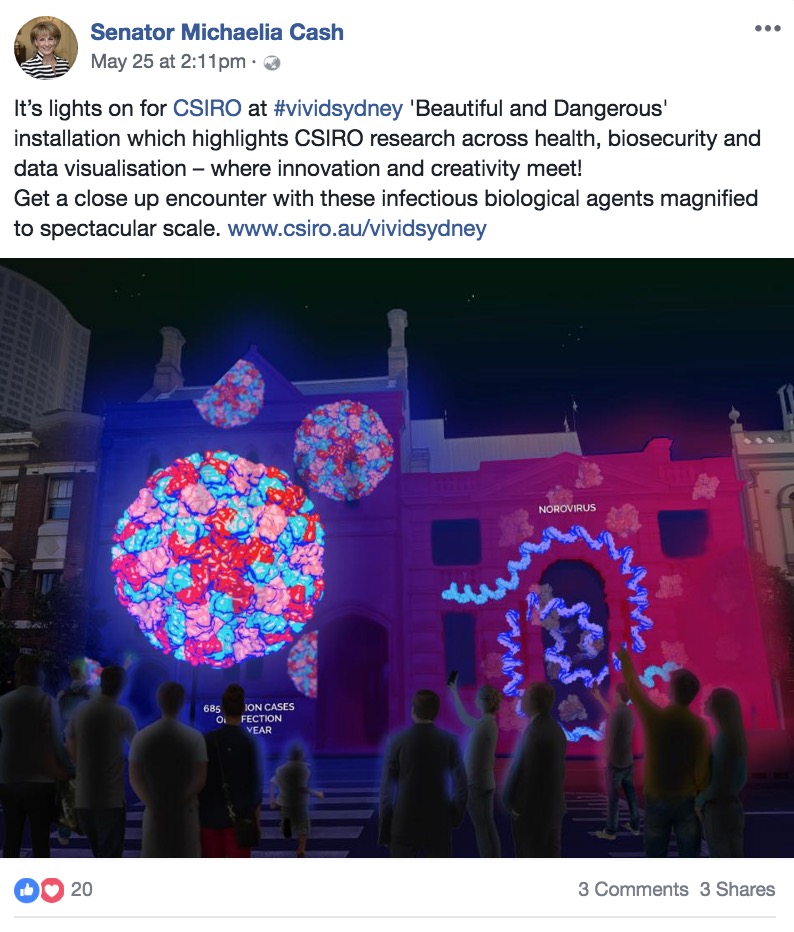 Promoted stargazing with the ABC. 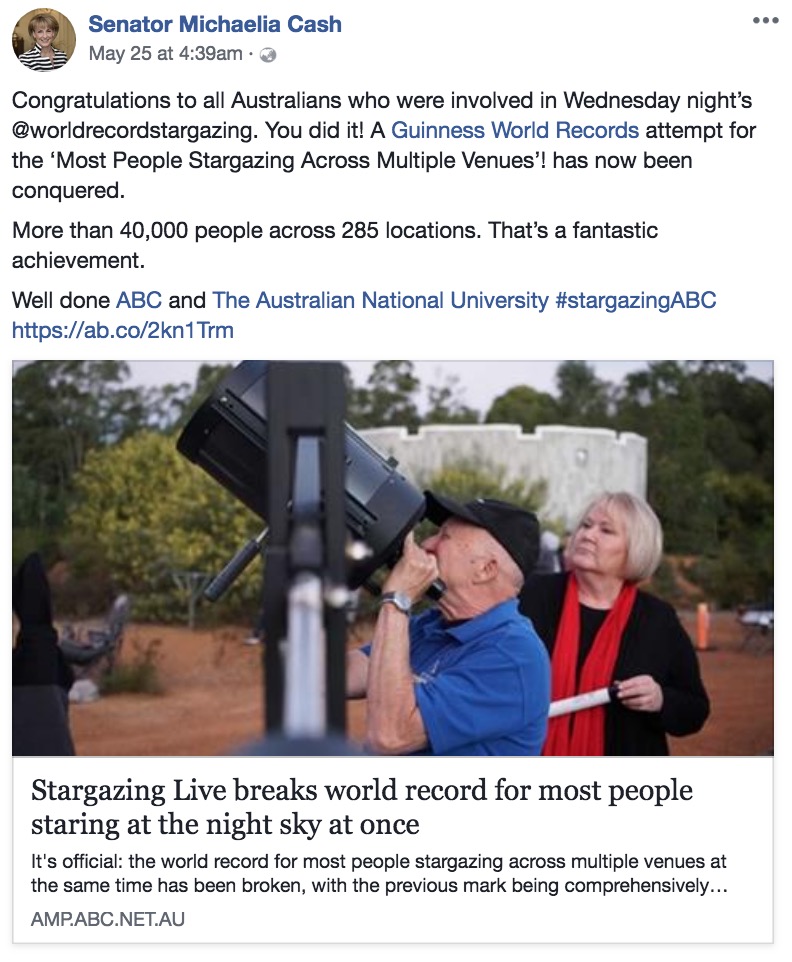 And found time to meet with refugee activists to discuss how our Government can give away even more stuff to refugees. 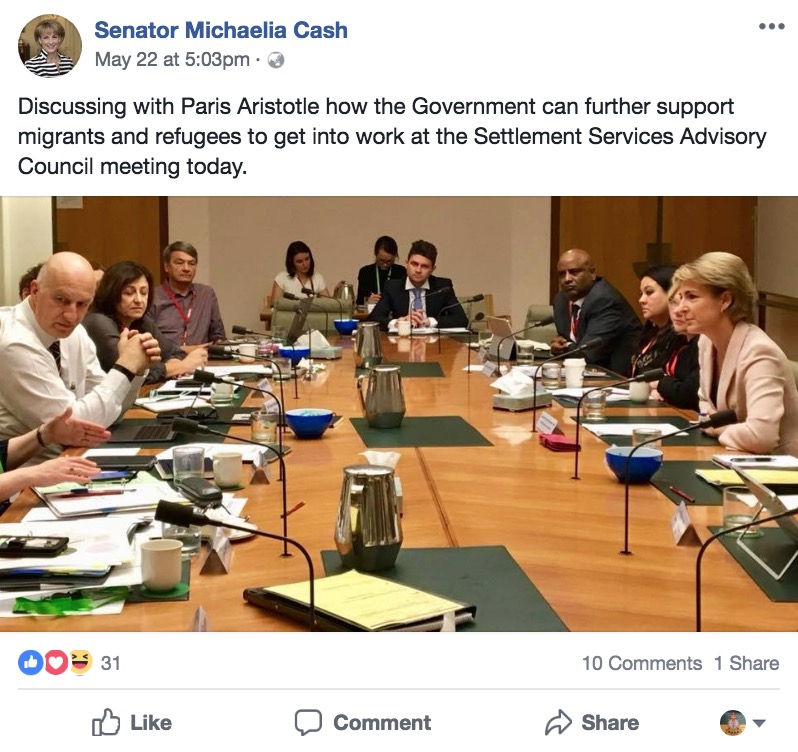 As to any response to our notes - there's been no touch and no trace.

Gosford Anglican Church billboard gets put to good use As The People's Champion says when he knocks off stuff from this website, that photo was "seen on social media".

Could you do with a few words of encouragement right now?

Roger is an active member of the team at this website.

He made this comment after the charges against Ralph were dropped.

Roger said:
Michael, can we now assume this is “dead in the water” and nothing more can be done? Please tell us you have more AWU WFA cards up your sleeve, it would be tragedy if this is the end of the line.

One of the reasons Roger is so effective in business (and in helping advance issues here) is his legendary follow up.

I've just received this note from him.

I am sure you are devastated re the Gillard matter.

I have been spreading the word far and wide, nobody I speak with even knew about this. There needs to be a F#UK$@g revolution over it!

Michael, please tell me this is NOT the end of the matter.

Here's my note to Roger.  I hope it helps you too. 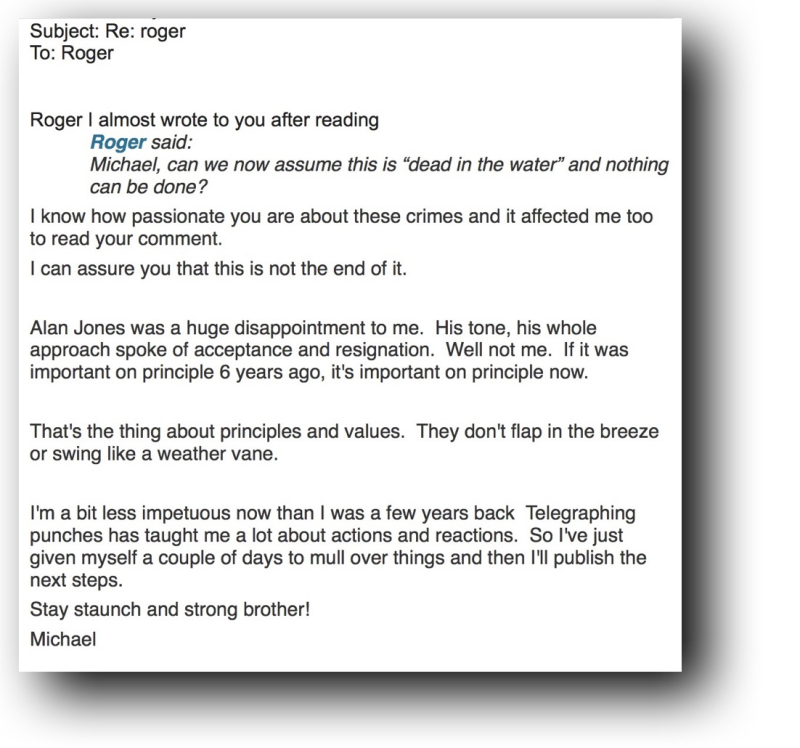 First the caveat - let he who is without sin etc.  I'm in the LQP (least qualified persons) group to proffer advice on marital matters.

But I often wonder about the alternatives in marriage law.

Are we the better for liberal divorce laws which give state-sanctioned authority to breaking a solemn vow?

The vows used to mean what they said - till death us do part.

Until the mid 70s people put up with imperfect marriages.  You've made your bed, now lie in it.

Not now.  Not happy with your decision?  Just come back and exchange.

The tragedy is that ugly, damaging spectacles often follow.

Few, however as ugly and spectacular as this one.

Barnaby's an old mate and a legislator.

Correction, it is not Barnaby's fault. Carry on. RT ‘I wouldn’t have charged for interview’ https://t.co/OOCISToQJM

When I was at school crimson marked the British Empire on maps around the classroom.

The crimson bits were part of a system that's been one of the world's greatest forces for good.

The British brought with them the rule of law, democracy and other gifts that constructed great civilisations.

At the heart of British society is the individual's freedom.  Freedom to move, to assemble, to worship, to demonstrate, to grow, to get rich - or poor.

It's personal.   My right, my freedom.

Freedom of speech underpins it all.

The tide that exported Britannia's gifts to the world has turned and Islam is flooding in.

Islam is anathema to British ideals.

In the 1500s King Henry V adopted "Dieu et mon droit (God and my right)" as the monarch's motto.

Dieu et mon droit thrived through the centuries. In just the past 100 years it saw off the Kaiser, Hitler, the Soviets and the European Union.

But Britain won't need a motto like Dieu et mon droit where it's going.  Because mon droit - my right - won't exist.

Britain's civilisation is being replaced by the Arab Mohammedan way of life -  in criminal justice, contracts, segregation of men and women - in everything.

And that movement's name is its underlying philosophy.

Islam - or in English - submission.

The word "courageous" is in pretty bad shape.

It's been flogged - trotted out far too often and mostly in company with Tracey Spicer or ageing gentlemen who've discovered they're woman.

Here's a young woman with whom "courageous" sits perfectly.

President Trump's magnificent speech to US Naval Academy on Friday

You have earned your place in the ancient league of sailors and shipmates, captains and commanders, warriors and mariners, and Marines.

You crave adventure. You chase discovery, and you never flinch in the eye of a raging storm. America is in your heart. The ocean is in your soul. The saltwater runs through your veins. You live your life according to the final law of the Navy. The word impossible does not exist, because Navy never quits.

And how good is this?

The President shook hands with each of about 1,100 Naval Academy personnel!

Now compare and contrast with the dipstick who preceded President Trump - giving a similar address to the US Coast Guard Academy in 2015.

You'll never guess what he said was the greatest threat facing the US and its military!

Now let's get back to reality!  Here's President Trump's transcript: