The woman is inept.

By Jonathan Kearsley • Political Reporter
1:01pm Jul 30, 2018The Australian Workers' Union has told 9News a police investigation into leaks over the AWU raids has been referred to the Commonwealth Director of Public Prosecutions.

News of the raids on union offices was leaked to the media from the office of Employment Minister Michaelia Cash before they happened, prompting camera crews to be camped outside offices in Sydney and Melbourne as police arrived.

Ms Cash's media adviser resigned in the wake of the affair.

AWU National Secretary Daniel Walton told 9News in a statement, "it is troubling but not surprising that the Australian Federal Police have decided to refer their investigation to the Commonwealth prosecutor".

I need your support to keep going

The prosecution brief against Gillard is getting stronger.

It's been fantastic to work with the detective who was originally responsible for this matter, Dave McAlpine in getting our case together.

I couldn't ask for a better advisor and supporter.

But I need your financial support too, just to keep going.

A reminder of who we are really dealing with when it comes to Turnbull. 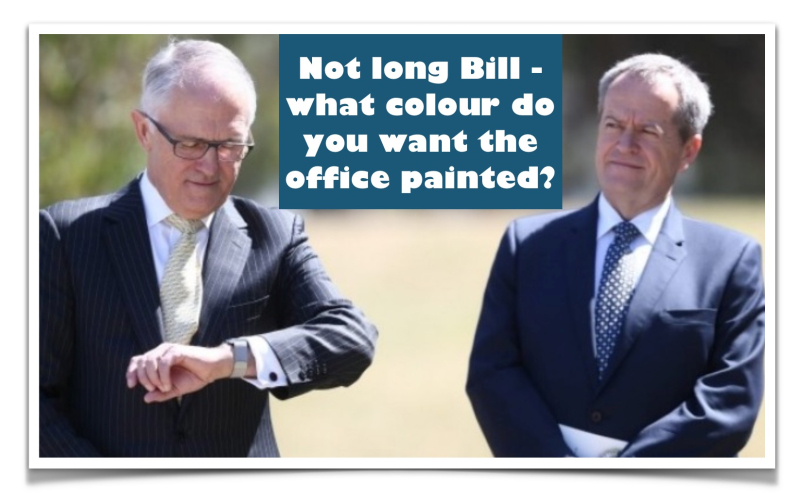 The Sunday Telegraph has confirmed Mr Turnbull approached at least six senior ALP figures, including former Prime Minister Bob Hawke, actively seeking their endorsement to join the ALP at the time of the republic referendum.

Speaking for the first time on the issue, Mr Hawke said Mr Turnbull approached him on November 6, 1999, at Sydney's Marriott Hotel following the referendum's defeat.

Mr Hawke said yesterday he remembered the conversation clearly. Mr Turnbull told him: "Bob, the only thing I can do now is join the Labor Party.''

Mr Hawke said he replied by telling Mr Turnbull ``he could be accommodated'' and that "the Labor Party was a broad church''.

The former senior ALP staffer David Britton, who founded the Labor lobbying firm HawkerBritton, said Mr Turnbull told him at the time of the referendum he was "deeply p..... off with Howard'' - and that he had a "very different social agenda'' to the then prime minister.

Mr Turnbull told Mr Britton: "Don't you think Kim Beazley would like somebody like me as his finance spokesman?''

The Sunday Telegraph has confirmed that NSW Health Minister, John Della Bosca, was also approached by Mr Turnbull earlier that year about the possibility of securing an ALP NSW Senate seat.

At the time, Mr Della Bosca was the state secretary of the NSW Labor Party.

Senior Labor figures said Mr Turnbull raised his interest in becoming a Labor MP with the then ACTU secretary Bill Kelty as well.

While there have been previous rumblings - which have always denied by Mr Turnbull - about him wanting to the join the Labor Party, today's revelations make it clear that his pursuit of a Labor seat was concerted and he made approaches to influential Labor figures across the party.

The various approaches by Mr Turnbull were revived in closed door discussions involving Mr Beazley and Mr Hawke at this week's Australian-US Leadership Dialogue in Melbourne.

Mr Beazley, the Opposition leader in 1999, confirmed yesterday he had a conversation with Mr Turnbull a year earlier at the Constitutional Convention.

Mr Beazley, who has previously made some details of the conversation public, said that Mr Turnbull used the conversation to explore his options of getting into politics through the Labor party.
Mr Beazley said he rebuffed him, telling him he ``was basically aLib'' and he should join theLiberal Party if he wanted to enter Federal Parliament.

Mr Britton, a long-time press secretary to NSW Premier Bob Carr, said Mr Turnbull was "definitely flirting'' with the ideaof joining the ALP and, at thetime, was also close to the ``godfather'' of the NSW Labor Right, "Johno'' Johnson.

After raising the idea of becoming Mr Beazley's finance spokesman, Mr Britton said he told Mr Turnbull that a Labor seat was not his to give and then referred him on to Mr Della Bosca.

Another senior figure in the republican movement told The Sunday Telegraph he also talked to Mr Turnbull about his Labor ambitions.

Tony Pooley, who now works for NSW Minister Kristina Keneally, said Mr Turnbull "had reflected on the fact he had some general discussions with Paul Keating about representing Labor federally''.

Former Labor powerbroker Graham Richardson revealed in October, 2003, that Mr Turnbull had sought a safe Senate seat from him. Mr Turnbull, seeking Liberal pre-selection for the seat of Wentworth at the time, labelled the claim a ``lie''.

However, Mr Richardson this week told The Sunday Telegraph he stood by the claim. He said there were "a string of witnesses'' to the half-hour meeting with Mr Turnbull, which took place in his office.

Mr Turnbull said yesterday: "Political parties always seek to recruit people they think may be of talent and over the years a number of people inside the Labor Party have sought to recruit me.

"I've always treated these invitations politely. But actions speak louder than words and I have never joined the Labor Party.''

From our reader Geoff.

As a contrast to the pink nail-polish men.

This is a VERY touching video, actually a piece of film that has been made into a video, this is one that is NOT photoshopped, it's the real scene!

Notice in the opening shot you'll see the gunner's position is all shot to hell while the pilot's cockpit ahead of it is undamaged.

Later on notice the corpsman taking a fingerprint of the deceased gunner, before the film continues, then showing the chaplain saying the final prayers, followed by taps, then the sailors push the aircraft and our patriotic airman over the side and watch it sink into the distance sea.

Here's one for a serious conversation with your kids.

No safe spaces, no hurtful unthinkable remarks that they couldn't cope with, just dying for their country so the ungrateful, uninformed people of today could act like fools decades later.

This 2 minute video is pretty moving.

"What actually made us great is ordinary guys like this doing extraordinary things."

Of course it will be fantastic for Timor Leste to have Julie Bishop there.  She's the hander-outer of money.  Just for foreigners, not for our people.

Left Perth early this morning, now in transit Darwin - looking forward to seeing you in Dili in a couple of hours! 🇦🇺🇹🇱 https://t.co/jNspm4X75o 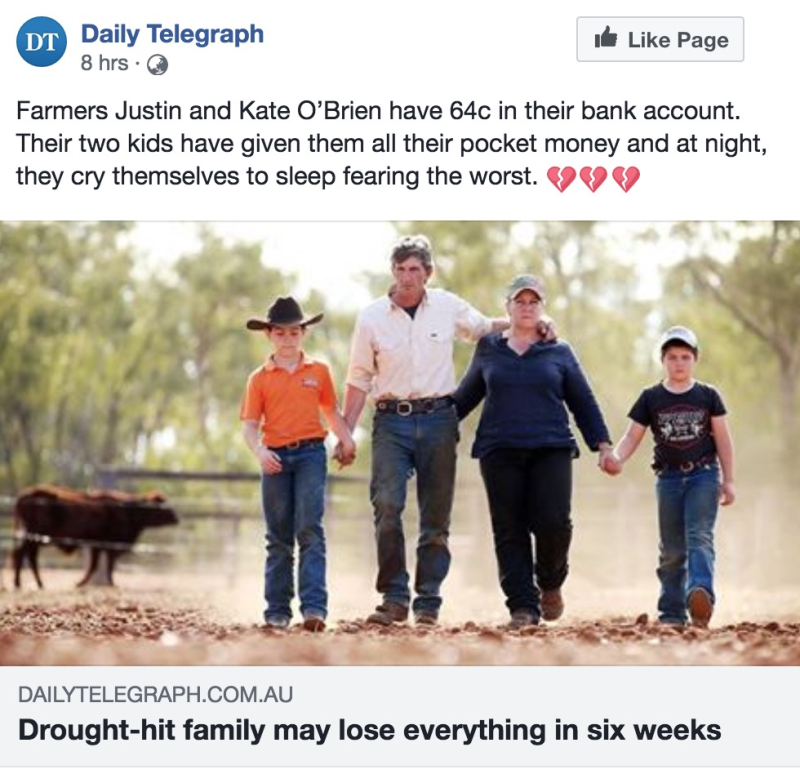 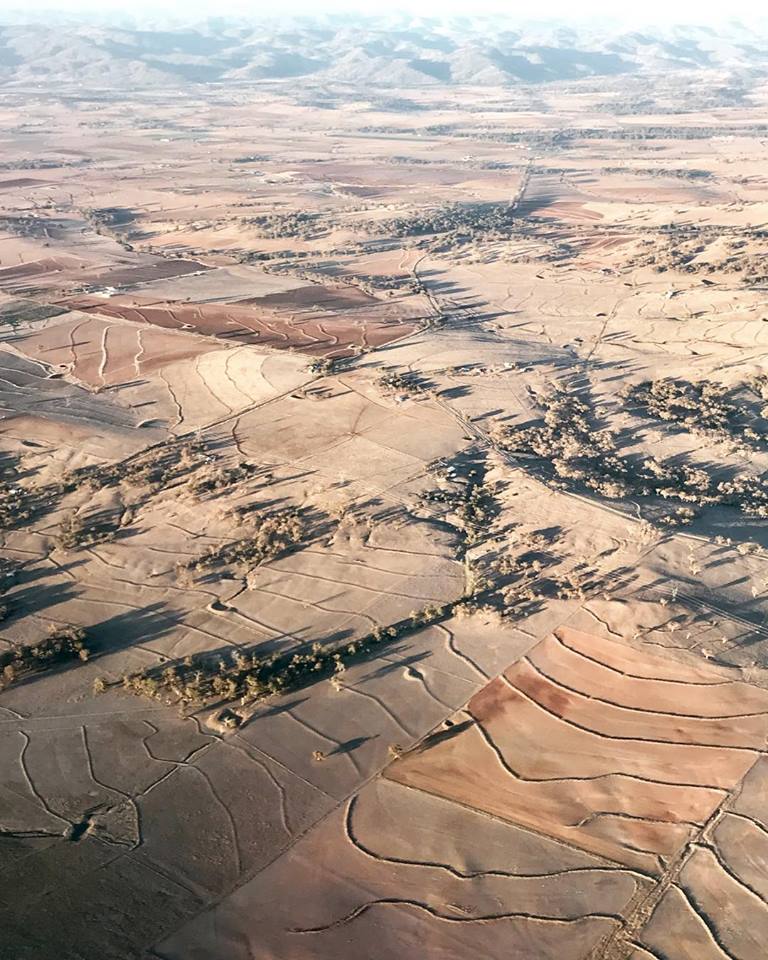 2790 Lithgow outcasts
Like This Page · 12 hrs ·
This is not Central Australia. This is Tamworth from the air 28th July 2018
ENDS
PS - right on cue - Julie Bishop wants you to know she has received a warm welcome in Dili.

Warm welcome in #Dili - looking forward to a busy visit as we embark on a new chapter in relationship with our friends and close neighbours #TimorLeste 🇦🇺🇹🇱🌏 pic.twitter.com/BDOca1Jdf6

I've always been puzzled by the insertion of the bumbling, inept but female Marise Payne as Australia's defence minister.

But until today I didn't know about this:

We are indebted to reader Dennis Thompson and his wonderful website www.stopturnbull.com for the following extract: 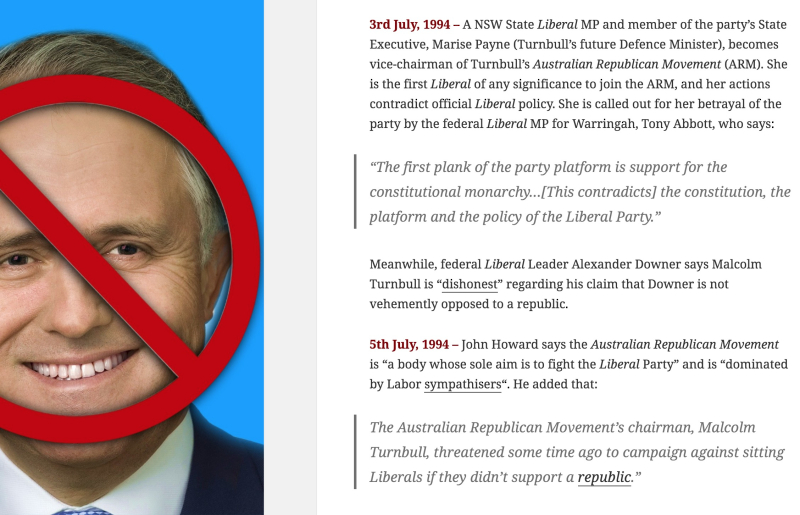 I've never heard Turnbull or Payne refer to this piece of history.

It explains a lot.

I've checked Payne's Wikipedia entry, her own website and her parliamentary bio - zip on the Turnbull connection:

The personal website features this photo - like her role in the ARM, it seems to be from a long time ago.

The unnaturally thin Payne does admit she's a Republican in her maiden speech - but there's no mention of her antecedents working for The Chairman.

Isn't that the sort of thing voters should know about?

Particularly when they have a Minister for Defence supervising our fighting men painting their fingernails with pink nail polish? 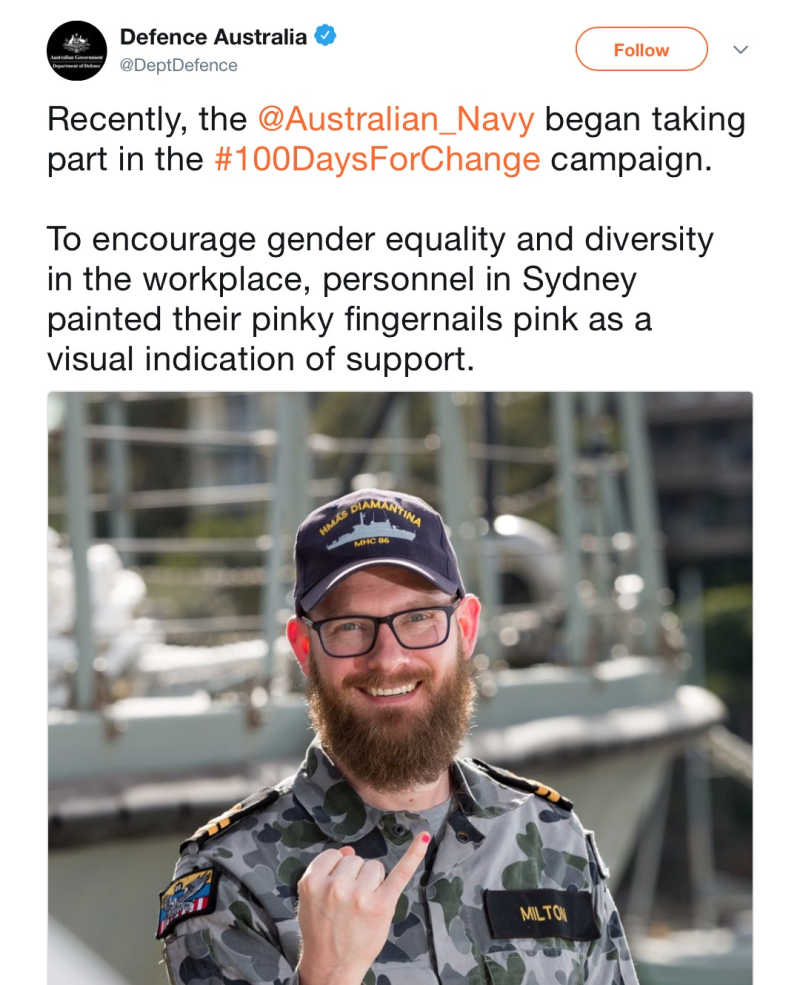 Recently, the @Australian_Navy began taking part in the #100DaysForChange campaign.

To encourage gender equality and diversity in the workplace, personnel in Sydney painted their pinky fingernails pink as a visual indication of support. pic.twitter.com/AK9JqszdR6

What's your favourite Malcolm's-got-no-judgement moment?  Is it:

C. Replacing the economy with a National Ideas Boom? OR

Holding the Super Saturday By-Elections on the planned date of Labor's National Conference to really stick it up the Labor Party....... 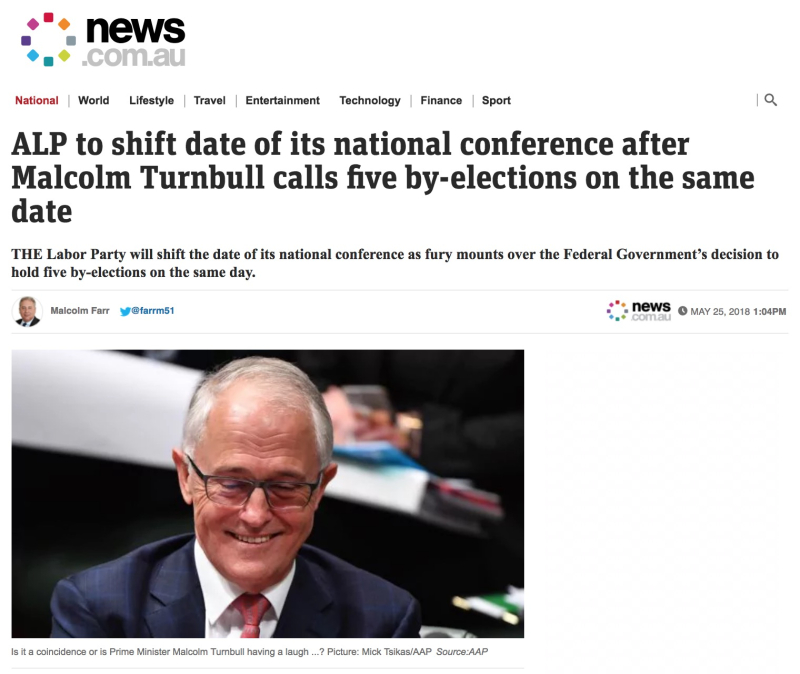 ...to really give them something to celebrate! 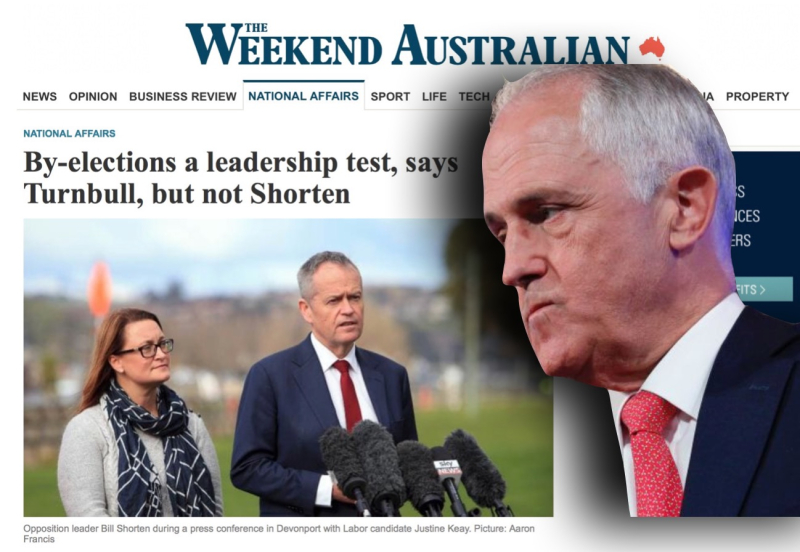 Have you ever seen them in the same room together? 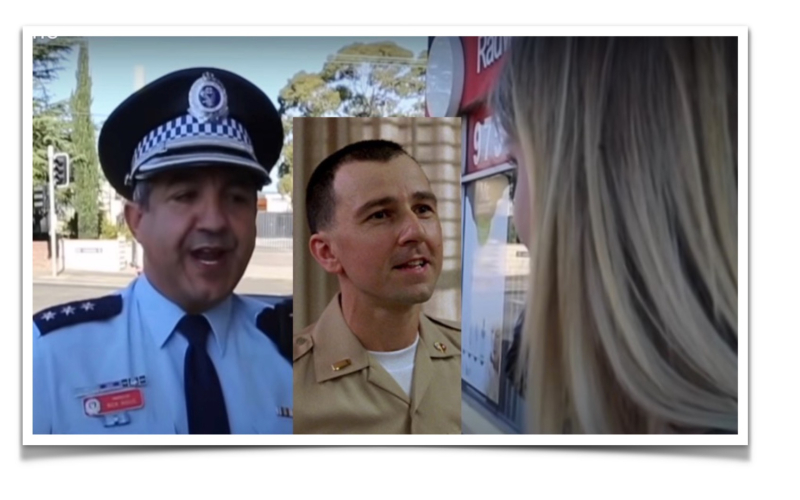