The genius of Caravaggio

After seeing your post re the Republic of Nauru’s tweet about the conditions for kids on the island, I thought I’d ask the "Insiders" panelists for comment yesterday. Julia’s untrustworthiness also got a mention... Cheers, Bill T 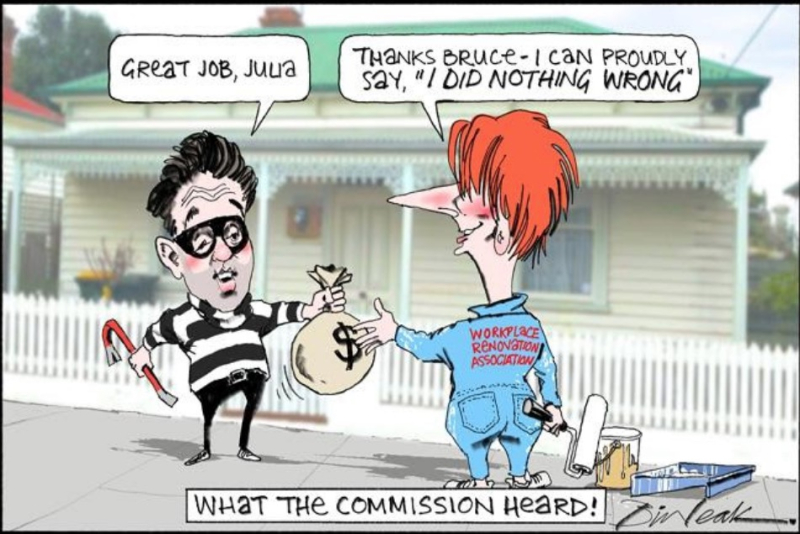 Joe's spot on.  This is terrifying.

"Absolutely every idea should be able to be contested otherwise there is no progress." @Joe_Hildebrand weighs in on the European Court of Human Rights upholding a conviction against a woman who criticised the Islamic prophet Muhammad. #Studio10 pic.twitter.com/O45Fxb324M

He had sex with a 9 year old girl.

Anyone have another definition for that behaviour?

And according to the teachings of Islam, Muhammad led the perfect life and is to be emulated in every way. 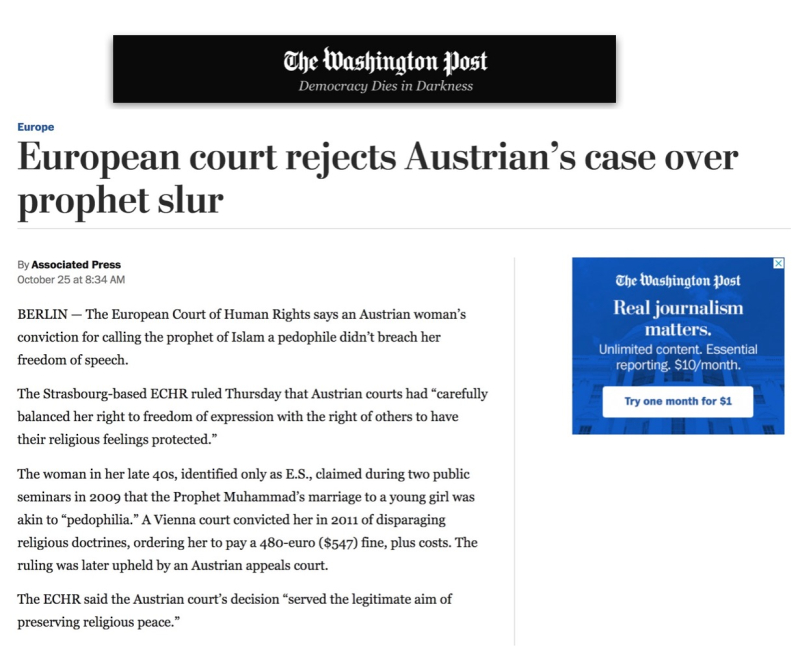 Who is Michael Smith?

From the Australian Conservatives Kirralie Smith who says:

Solid gold. Must watch. This video shows the utter stupidity of a white male identifying as a black, gay, woman. Self ID is idiotic, dangerous, & fraught with endless complications.

Reminds me of someone!

What have I done for Australia?

Last night Twitter user John Newton brought this story about Ms Gillard to my attention - and asked me what I'd done for our country. 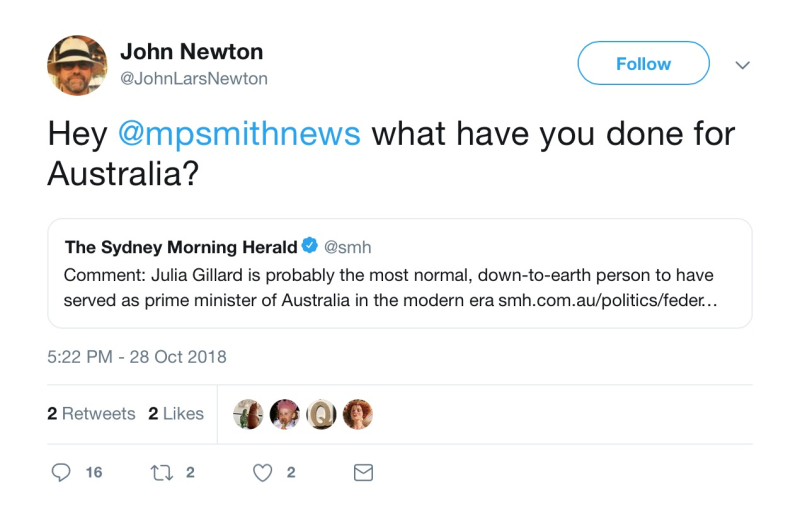 There seems to be some interest on Twitter in my response.

I served 8 years in our Army. Then 5 years as a policeman. I have followed through on the criminal investigation of the offender GILLARD for 7 years. I am bringing criminal charges against her for her offending against the community. Anything else I can help you with? https://t.co/Rrw9Lf0JOS 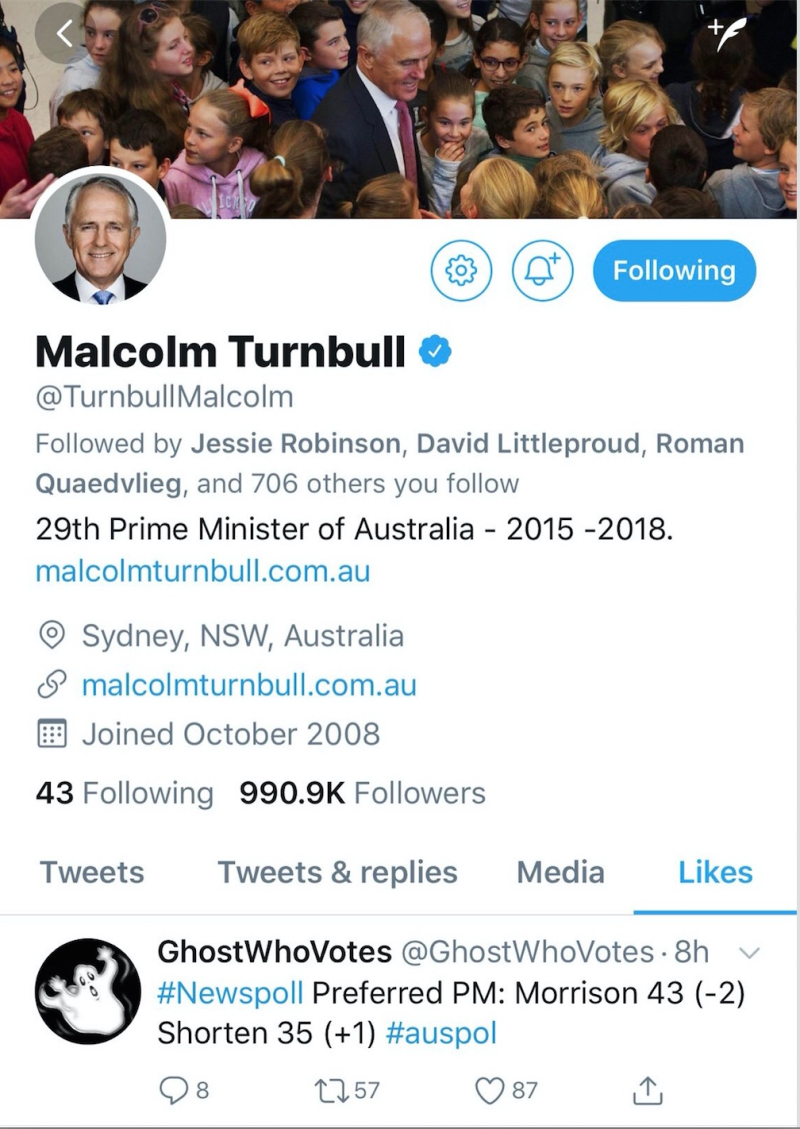 Thanks to reader JM for the tip.

The Australian has now taken up on the story too.

Scott Morrison has brushed off his descent into negative personal polling territory in today’s Newspoll after Malcolm Turnbull liked a tweet showing the Prime Minister’s numbers going down.

“These things bounce around and that’s the case for all politicians. But it just doesn’t distract me from the job I have,” Mr Morrison told K Rock FM in Geelong.

“When you become prime minister in the way that I did, I wasn’t planning for that to occur at that time, but when you have to step up for the leadership as I did, you just get on with the job and the people you’re trying to help.

“I frankly don’t have the time to focus on those sorts of things.”

The government is also facing a wipe-out at the next election according to Newspoll with Labor’s two-party-preferred lead over the Coalition increasing by one point to 54 per cent versus 46 for the government.

Today’s Newspoll results would be concerning for most Coalition backers. But former Prime Minister Malcolm Turnbull has liked a tweet which showed the preferred prime minister gap between Mr Morrison and Bill Shorten closing.

Mr Morrison still leads as preferred prime minister at 43 per cent of respondents, but that is down 2 points from the last Newspoll.

What a magnificent tribute.

NSW Police bandsmen, kids - an impromptu gathering on the footpath and onto the road outside the late Richard Gill AO's house.

How wonderful that in Richard's last hours this tribute to him and to the power of music played out there at his home.

I defy anyone of my vintage with military or police service to watch the rendition of Dambusters here without a tear in their eye.

I know that he'd approve of the effect of this music. 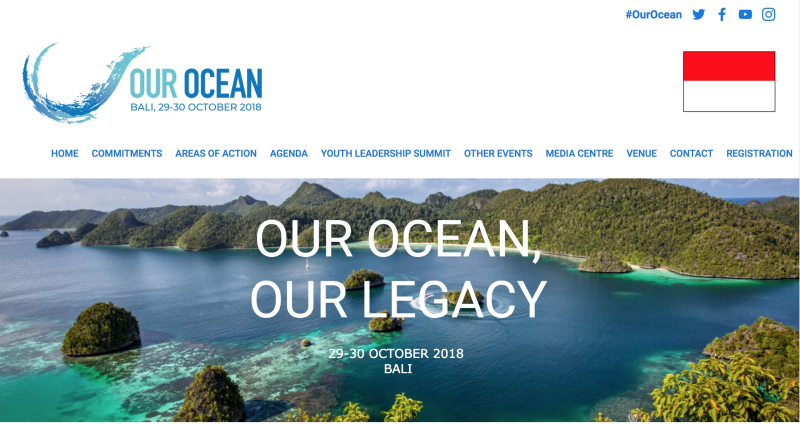 I'm en route to a court in Australia - I'll be in WA briefly tomorrow then on to the Eastern states to file the charge(s) against Ms GILLARD.

I'm spending today in Bali where I had the privilege of watching hundreds of Balinese Hindu people cleaning up their beautiful home.

Indonesia often cops a bum rap.  Bali is hosting the Our Ocean conference where Australia is being so poorly represented https://ourocean2018.org/

The Balinese aren't talking about taking care of their oceans.  They're doing it!

Here are some wonderful shots of Bali in the 1930s.  Horrible to think what the Japanese would have done to these beautiful people during the war that was just about to hit them.