This morning the Sydney Morning Herald and other Fairfax rags published another disgraceful chapter in Fairfax's catalogue of efforts to bring down our most decorated war hero, Ben Roberts-Smith VC MG. 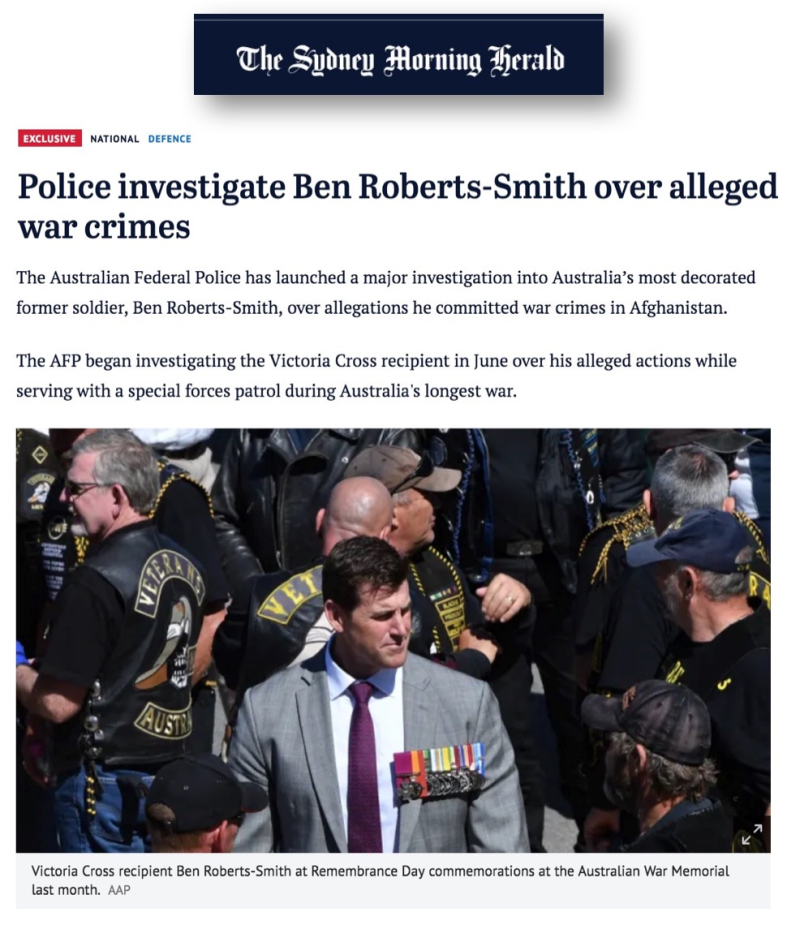 Fairfax provides this statement from the AFP as confirmation of its story:

In a statement to Fairfax Media sent on Wednesday evening, an AFP spokesperson said: "The Australian Federal Police (AFP) received a referral to investigate allegations of war crimes committed by Australian soldiers during the Afghanistan conflict."

That's it so far as anything like official confirmation is concerned.

However that didn't stop the headline

Note the AFP statement doesn't mention the name(s) of any suspect(s).

It simply confirms there's been a referral.

The Australian Federal Police has launched a major investigation into Australia’s most decorated former soldier, Ben Roberts-Smith, over allegations he committed war crimes in Afghanistan.

Fairfax says it's "....one of the most secretive investigations in the nation", and it's "the most serious inquiry ever conducted by the police into alleged war crimes".

Yet in the next sentence, Fairfax acknowledges, "The AFP.....declined to provide any details of its probe".

Fairfax then rehashes old stories about defence enquiries into the Afghanistan allegations - before we get to the guts of this shoddy effort produced in the dying days of the Fairfax brand.

Mr Roberts-Smith has claimed a series of articles published this year in The Age, The Sydney Morning Herald and The Canberra Times are defamatory because they portray him as a war criminal and also allege he punched a woman with whom he had an affair. Mr Roberts-Smith denies all the allegations.

Fairfax does not concede that it made all the claims that are alleged by Mr Roberts-Smith. If the court decides otherwise, however, Fairfax says it can prove the claims are true.

In support of its truth defence, Fairfax alleges Mr Roberts-Smith was involved in six unlawful killings in Afghanistan, including an alleged incident in 2012 in which he is said to have kicked Ali Jan, an unarmed and handcuffed Afghan man, off a cliff before directing a soldier under his command to shoot him.

Mr Roberts-Smith has said the defence filed by Fairfax was "baseless" and "purports to imply" that a list of 17 people, whose names have been redacted in the document, "will be witnesses in support of the Fairfax claims against me".

Mr Roberts-Smith said he was "confident that witnesses who will be called in this case will say that Fairfax Media’s allegations are untrue".

Last week, Mr Roberts-Smith issued a fresh statement denying all wrongdoing after the woman who alleges he punched her in the face in March outlined her claims in a sworn affidavit lodged in the Federal Court defamation proceeding launched by the ex-soldier.

The woman told the ACT police about the alleged assault in May, but later told officers she did not want to proceed with a criminal complaint, leading them to cease their inquiry. In the woman’s affidavit, she alleges she withdrew her complaint because she didn’t want her and her family’s identity exposed via any potential prosecution.

ACT Police has said that it ceased its investigation due to “insufficient evidence to support any prosecution.”

If a girl is inspired to be PM because of Julie Bishop's shoes we should pray to God she stays out of politics. 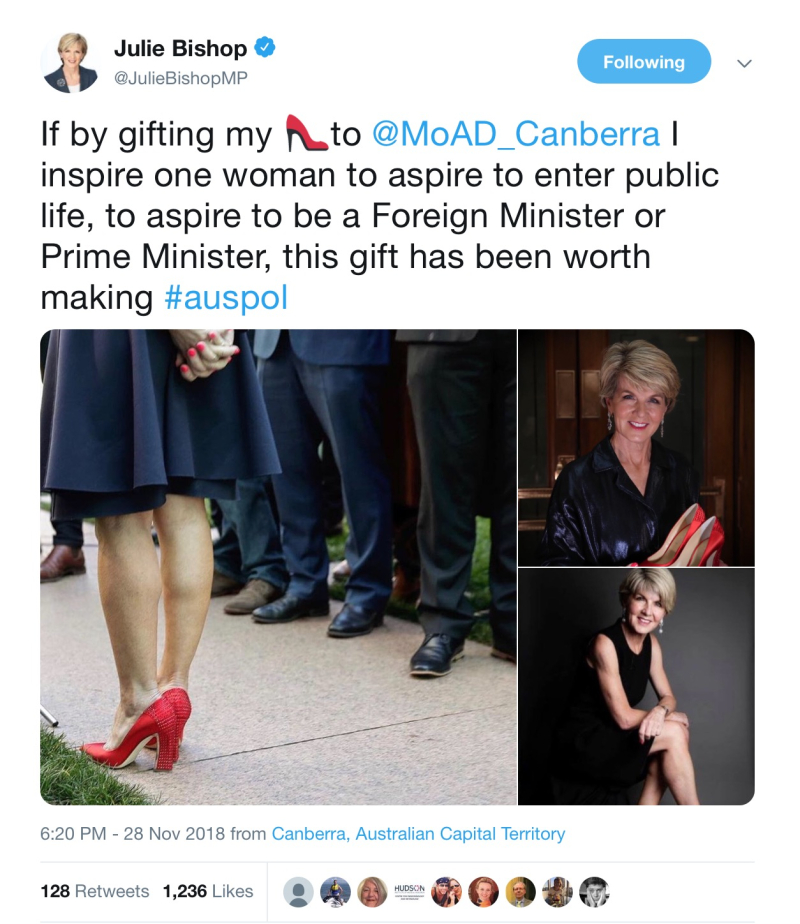 ...the Liberals leadership ballot......(courtesy of Stu of NT) 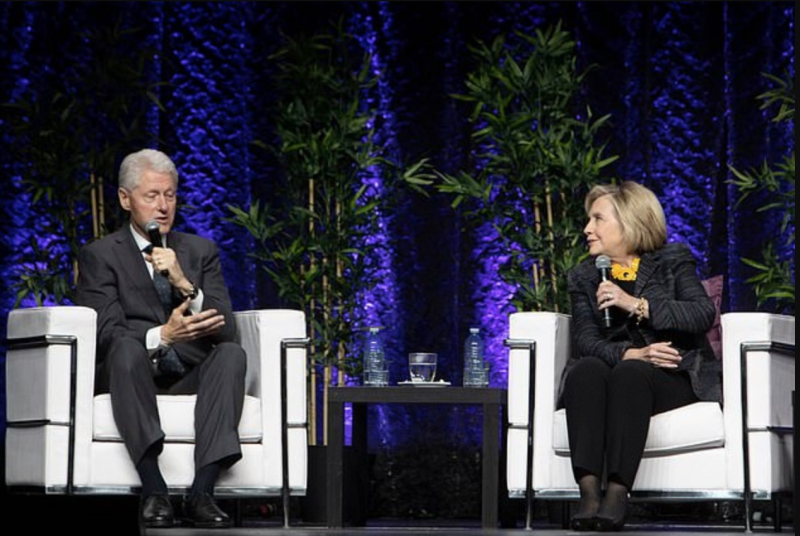 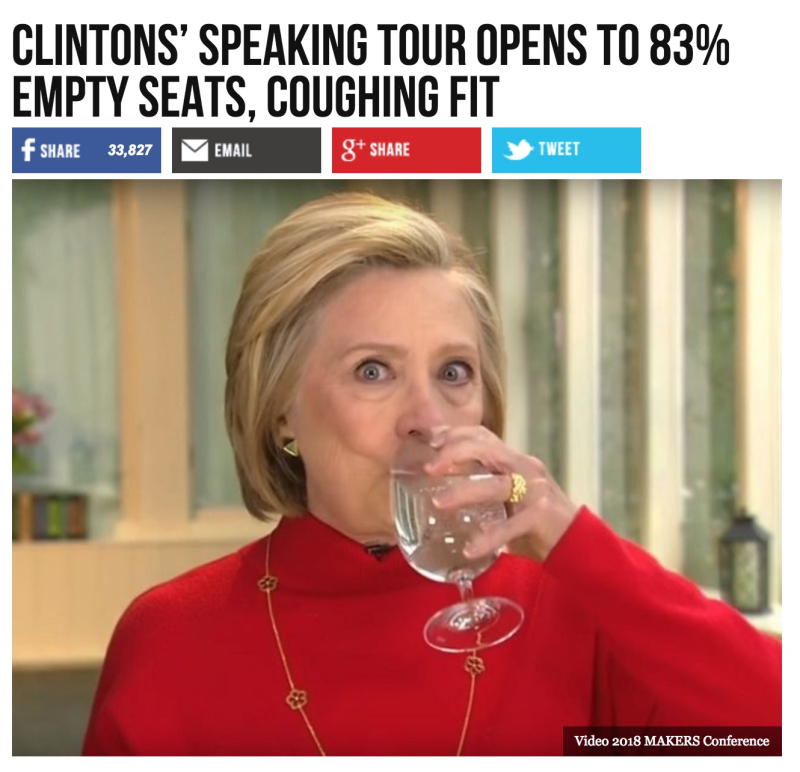 Beethoven, but not as we know it. Brilliant.

~ Pay Attention! ~ Muslims Have a Long Term Strategy To Implement #Sharia In Towns And Cities Across The U.S. ~ Listen to How They Plan to Take Over a City In Florida Using The Electoral Process. ~ @realDonaldTrump #Cody45🐯pic.twitter.com/wGfJzmaLmL

Obama wants you to thank him - this clip says it all.

This clip of Obama has it all:

- Lying about his own energy policies - which decimated coal, gas, fracking, Keystone XL

- Smugly asking the audience to 'thank' him pic.twitter.com/vMEJtVUwEv

OBAMA: We did not adapt quickly enough to the fact that there were people being left behind. And that frustrations were going to flare up and that all of these changes that were happening were happening really quick, and you had to address them and speak to them.

So, part of what’s happened is that when people feel their status is being jostled and threatened, they react. What I would agree with is that the Washington consensus, whatever you want to call it, got a little too comfortable with — they are looking at GDP numbers and looking at the Internet and everything is looking pretty great, particularly after the Cold War. After what you guys engineered, you had this period of great smugness on the part of America and American elites thinking, “We got this figured out.” … That came back to bite us.

Front page of The Australian today with some telling photos 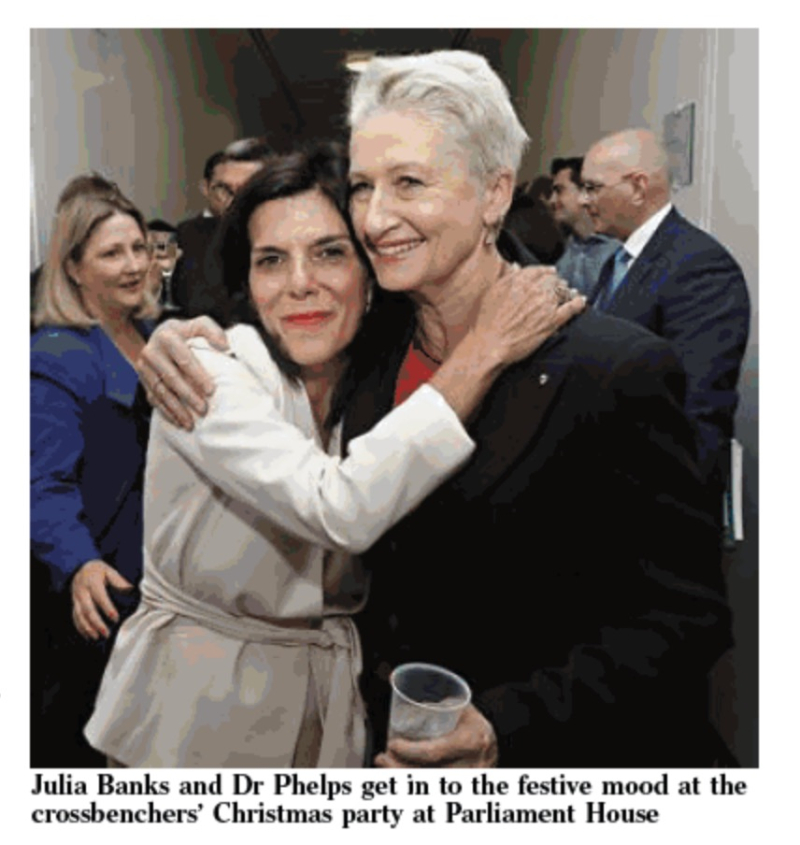 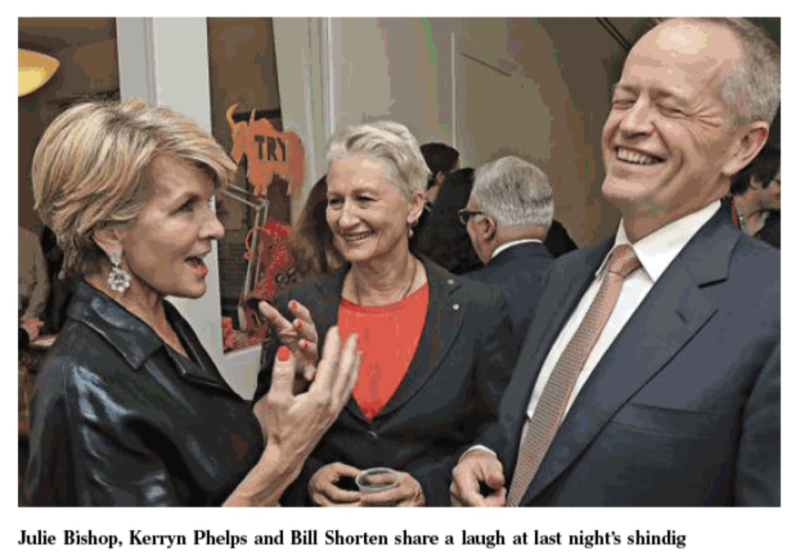 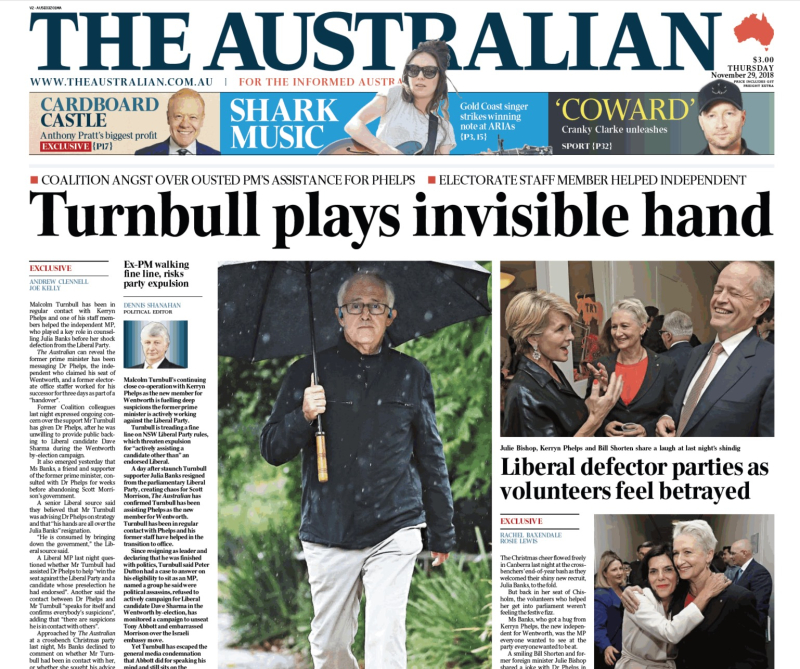 And this one from me - with apologies to Barry Humphries and Sandy Stone. 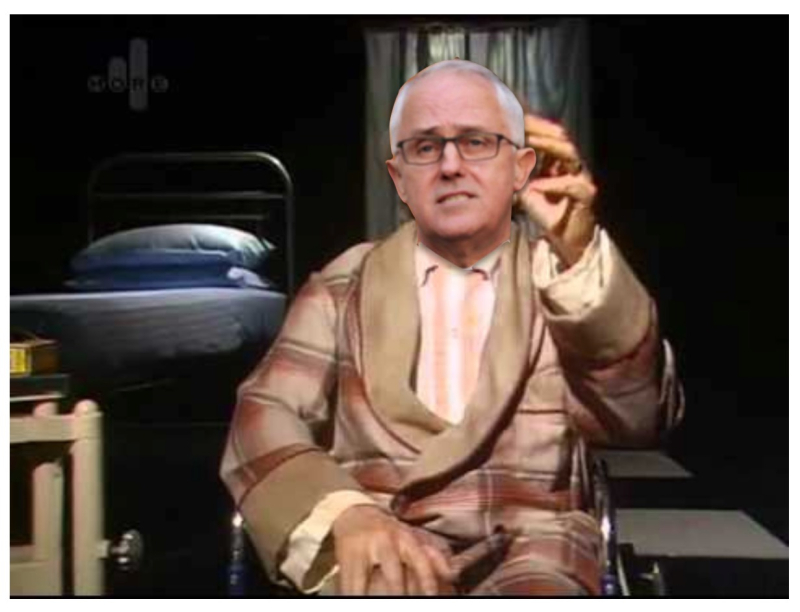 UPDATE - and now for his next trick, right on cue - please welcome the Miserable Old Ghost, MOGgy Malcolm!

Attribution bias - blaming others for the consequences of your own actions is a common symptom of paranoia. Imagining “invisible” people are out to get you is also a classic symptom. Not often on the front page of course... pic.twitter.com/HZoHLpfrGg

A man in a #burqa and a woman in a motorcycle helmet have walked into a Melbourne bank to make a point about political correctness. @OzraeliAvi @debbie1ala #niqab pic.twitter.com/gYIHRW5AaH

This is Malcolm Turnbull leaving politics, not being driven by hate and not being a miserable old ghost. 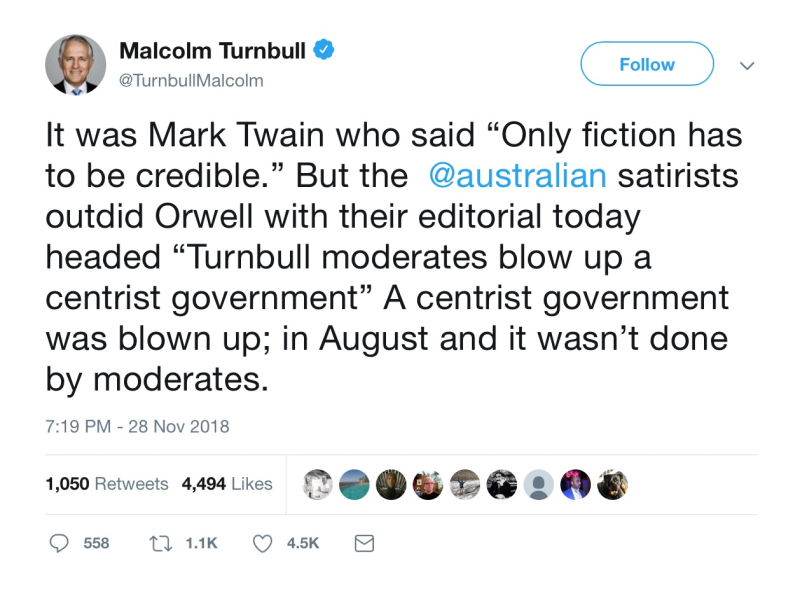 A work of fiction, satirical and Orwellian to say Turnbull loyalists are blowing up the Morrison Government?

Exhibit Two - Turnbull loyalist Julia Banks leaves the Liberals, damns the party in her speech to the Parliament while praising and pining for Turnbull - Morrison plunged into very very minority government.

Exhibit Three - Turnbull loyalist Julie Bishop promotes Shorten's energy policy based - cynically - on Turnbull's NEG.  She campaigns for a deal to get the Shorten/Turnbull policy up.

Here's Turnbull's Orwellian editorial.  I'd say it's spot on. 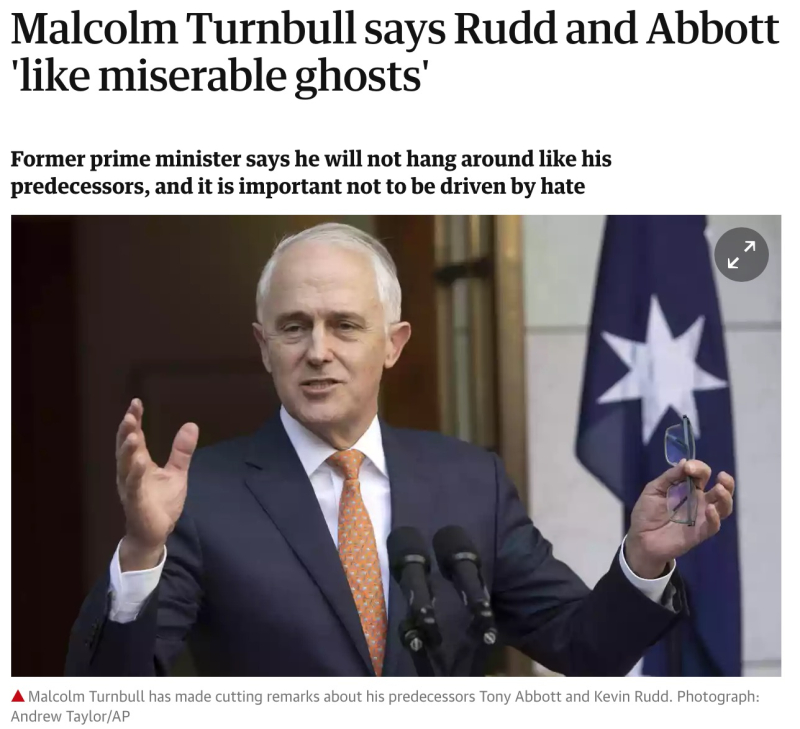 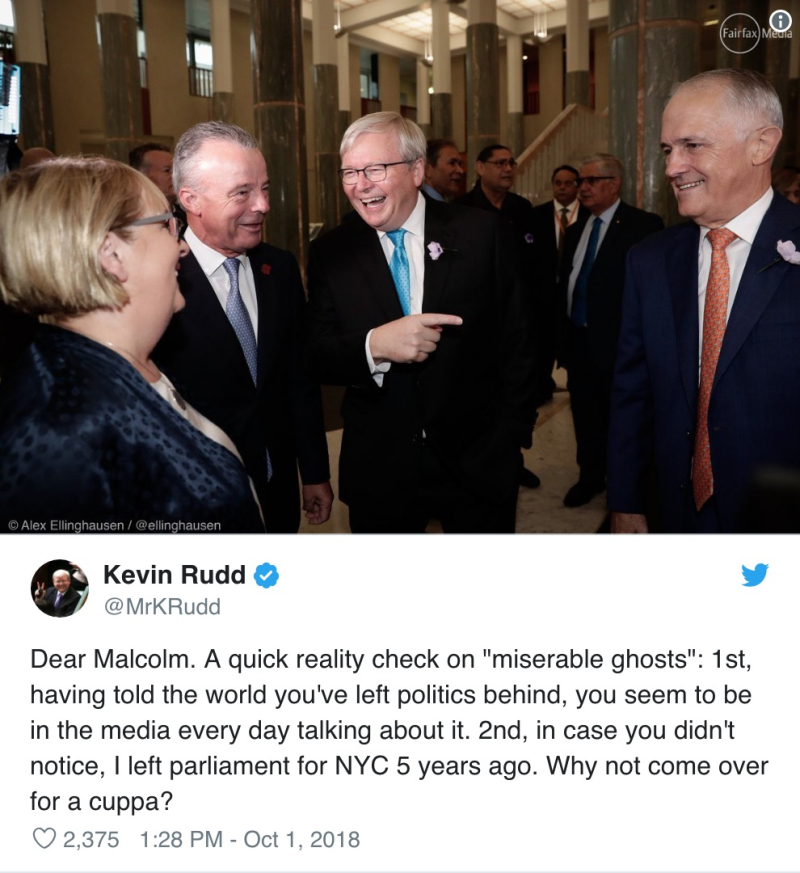 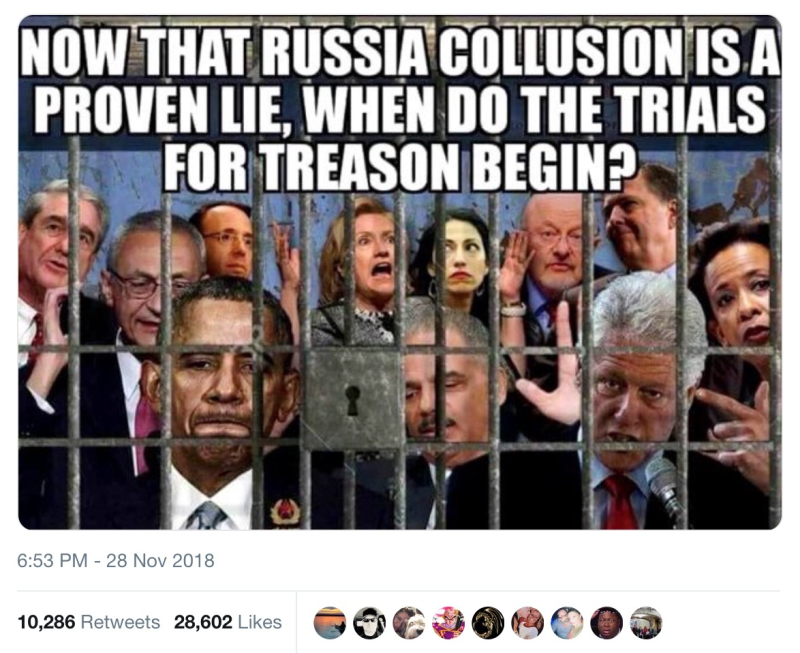