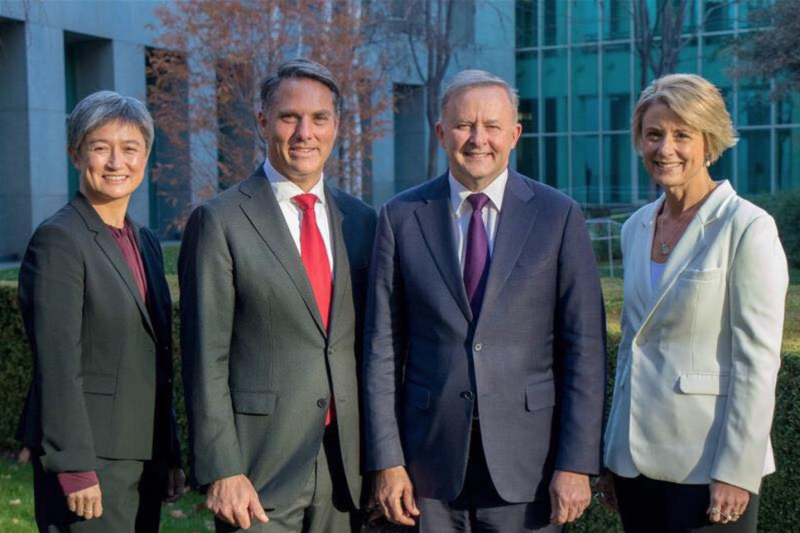 Justice gets - and gives - a chance 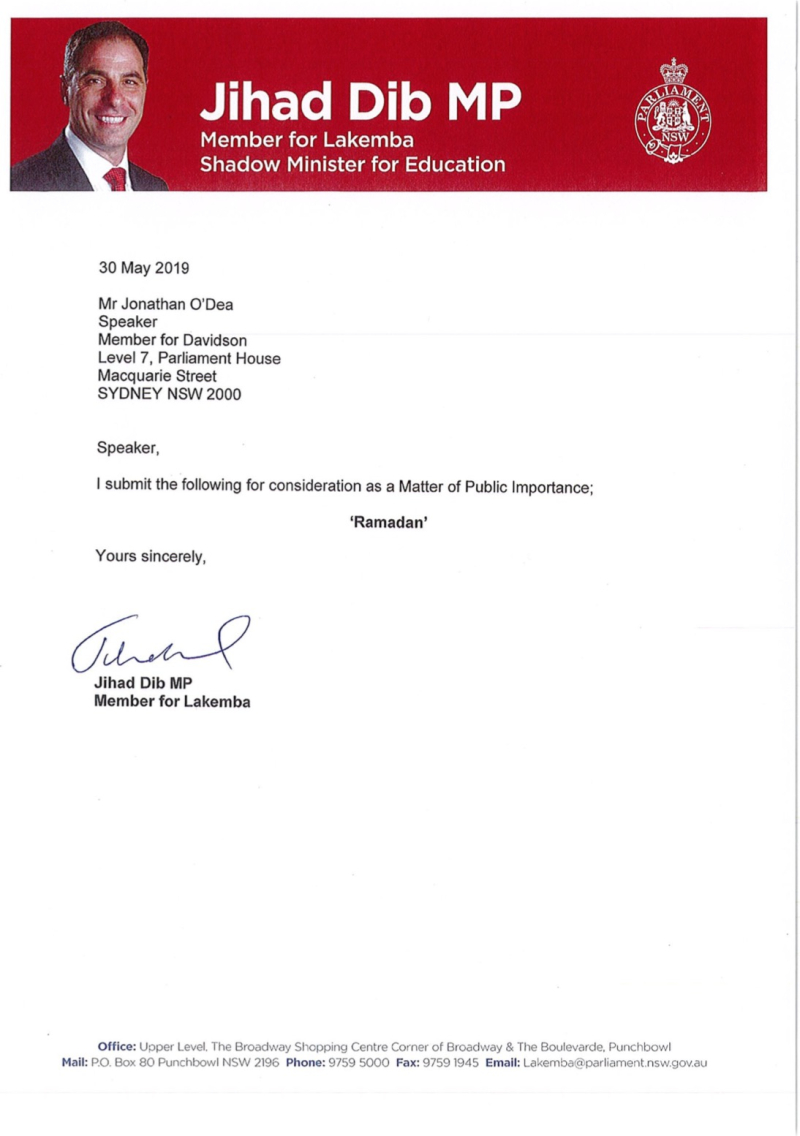 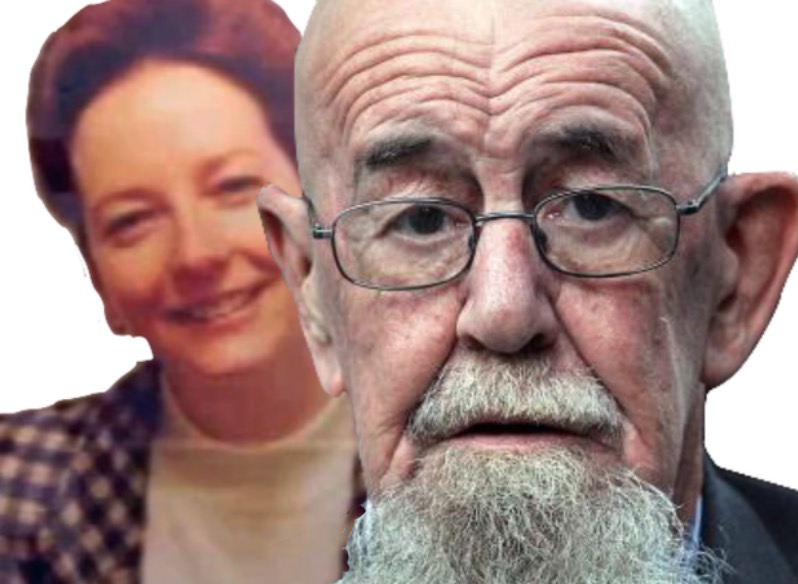 My legal team and I will be studying this judgement closely in the context of my private prosecution of GILLARD. 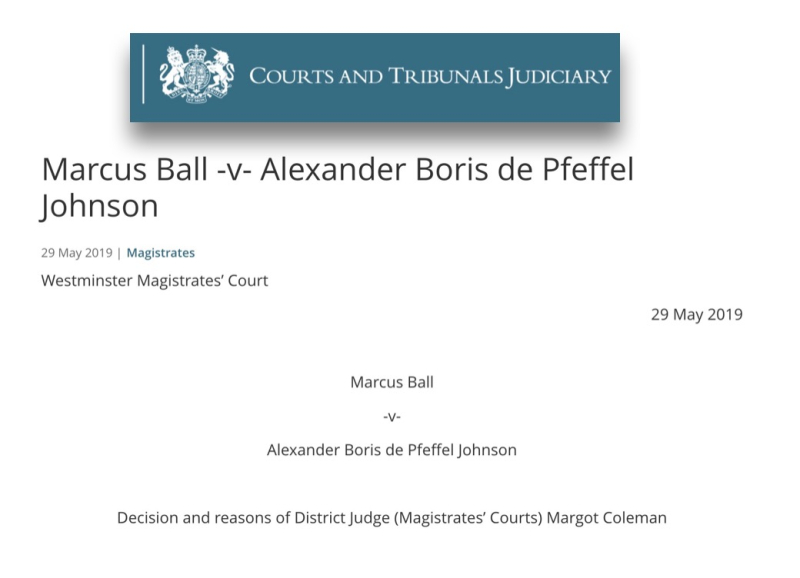 Private prosecution of Boris Johnson for misconduct in public office

More on ours soon. 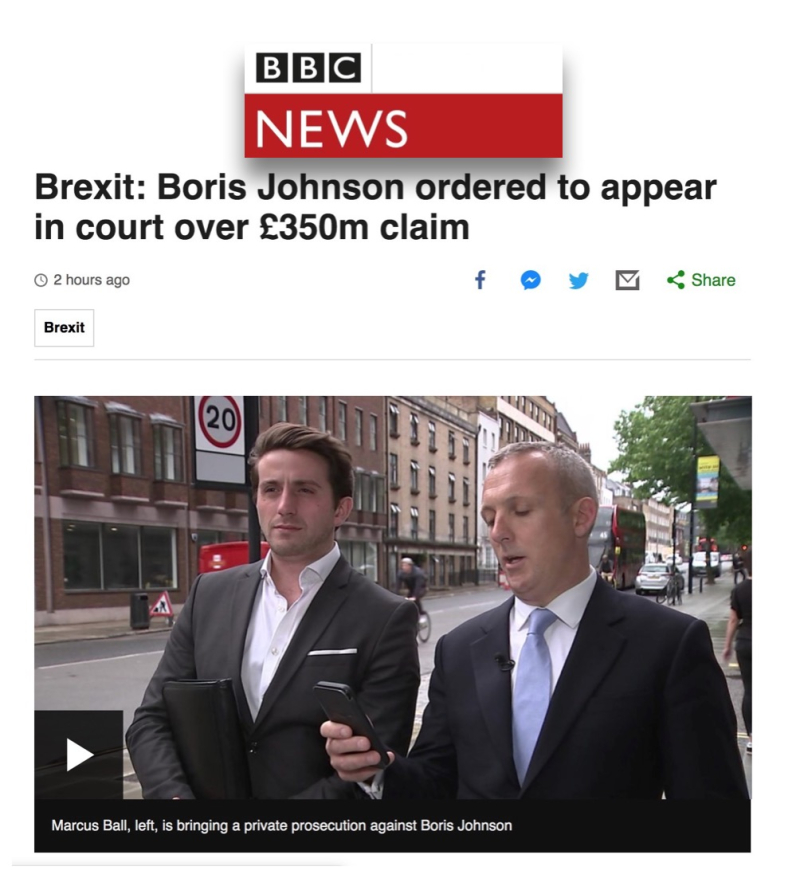 Boris Johnson has been ordered to appear in court over claims he lied by saying the UK gave the EU £350m a week.

The Tory leadership candidate has been accused of misconduct in public office after making the claim during the 2016 EU referendum campaign.

It is a private prosecution launched by campaigner Marcus Ball, who crowdfunded £200,000 for the case.

A source close to Mr Johnson called the case a "politically motivated attempt to reverse Brexit".

His lawyers argued it was "a stunt".

The preliminary hearing will take place at Westminster Magistrates' Court and the case will then be sent to the Crown Court for trial.

The BBC's assistant political editor, Norman Smith, said the allegations could not come at a worse time for Mr Johnson, and his critics are likely to use the claims against him in the upcoming contest to become next Tory leader and prime minister.

The £350m figure was used by the pro-Brexit Vote Leave group throughout the referendum. It also appeared on the side of the campaign bus, which urged the UK to "fund our NHS instead".

The former foreign secretary faces three allegations of misconduct in public office, between 21 February and 23 June 2016, and between 18 April and 3 May 2017.

The first period covers the time in which he campaigned for a Leave vote in the EU referendum, while the second covers the general election campaign that year.

Mr Ball's lawyers lodged an application in February to summons Mr Johnson, claiming that while an MP and mayor of London, he deliberately misled the public during the first campaign, and repeated the statement during the second.

"Democracy demands responsible and honest leadership from those in public office," he said.

Mr Power said the prosecution's application was not brought to undermine the result of the 2016 referendum and it was not about what could have been done with the saved money.

"The allegation with which this prosecution is concerned, put simply, is Mr Johnson repeatedly misrepresented the amount that the UK sends to Europe each week," he said.

"It is concerned with one infamous statement: 'We send the EU £350m a week.'

"The UK has never sent, given or provided £350m a week to Europe - that statement is simply not ambiguous."

What is misconduct in public office?

The source close to Mr Johnson said the decision to summon him was "extraordinary" and "risks undermining our democracy".

"It is not the role of criminal law to regulate political speech," they said.

"If this case is allowed to proceed then the state, rather than the public, will be put in charge of determining the strength of arguments at elections."

The private prosecution was also criticised by Conservative MP Jacob Rees-Mogg, who said it was "fundamentally ill-judged and improper".

"It is a grave error to try and use legal process to settle political questions," he told the BBC.

"The issue at hand is whether it was right to use the gross or net level of our contribution to the European Union - that is a matter of free speech and the democratic process."

But in her written ruling, District Judge Margot Coleman said: "The applicant's case is there is ample evidence that the proposed defendant knew that the statements were false."

She continued: "I accept that the public offices held by Mr Johnson provide status, but with that status comes influence and authority."

She added that there was sufficient evidence of an issue to proceed with a trial, though she stressed the allegations were currently unproven.

An authoritative analysis of Washington's battle of the titans 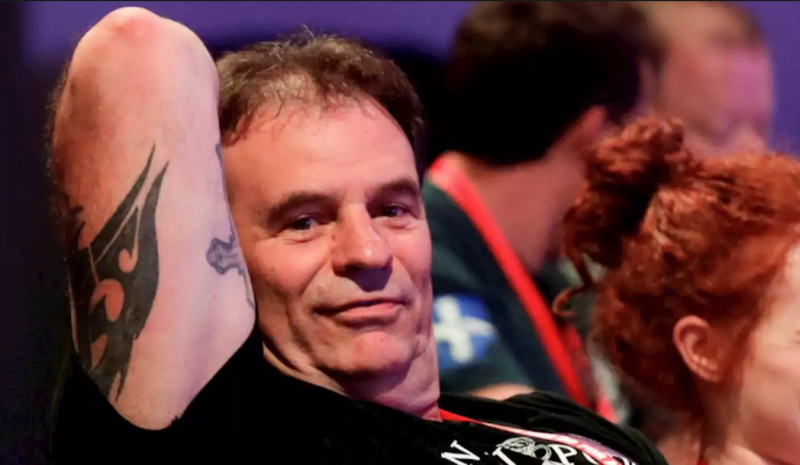 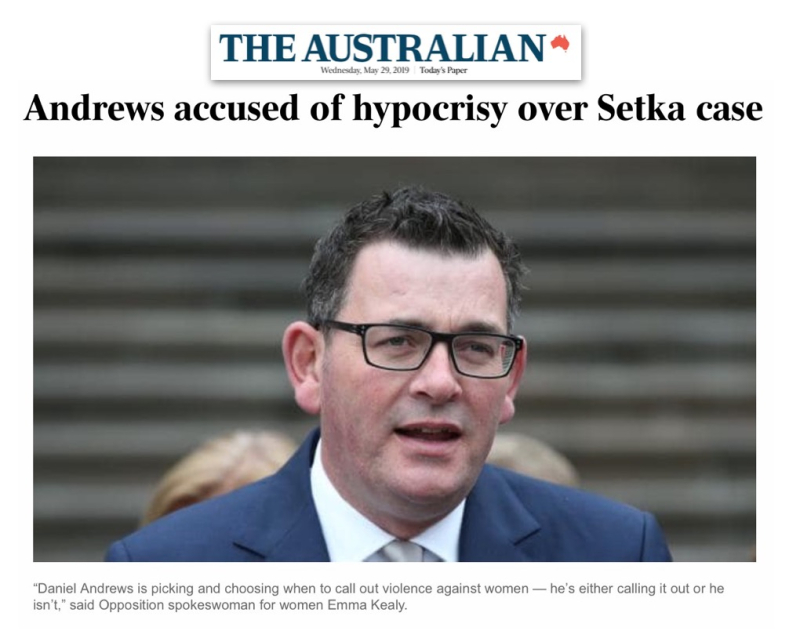 The Victorian opposition has accused Premier Daniel Andrews of calling out violence against women only when it suits him, after he repeatedly refused to condemn CFMEU state secretary John Setka, who last week indicated he would plead guilty to harassing a woman.

Mr Andrews claimed he could not comment on Mr Setka’s case as it remains before the courts, before referring to the alleged murder on the weekend of homeless Melbourne woman Courtney Herron — whose accused killer’s case is also before the courts — to highlight his government’s “second to none” record in changing attitudes towards women.

Opposition spokeswoman for women Emma Kealy said Mr Andrews’ claim that “the standard you walk past is the standard you accept … seems to apply to everyone but him and his union mates”.

“Daniel Andrews is picking and choosing when to call out violence against women — he’s either calling it out or he isn’t,” Ms Kealy said.

A charge of recklessly causing serious injury was among 30 against Mr Setka that were withdrawn last week, as he indicated he would plead guilty to one count of using a carriage service to harass over an incident allegedly earlier this year. The Australian has chosen not to name the woman.

Asked if he had called on Mr Setka to stand down from his CFMEU role, the Premier said he had not spoken with him.

“He has got a court matter that is afoot, and you know, we had a few games being played in the parliament yesterday where our opponents were talking about calling things out,” he told ABC radio. “It is not my practice, nor will it ever be, to cut across active matters that are in court.”

He made reference to Ms Herron’s alleged murder, for which homeless man Henry Hammond is facing charges, arguing his government’s record on family violence prevention and changing attitudes towards violence against women is “second to none”.

Mr Setka returned to work at the CFMEU last week. Both the CFMEU and the ACTU have so far refused to comment. 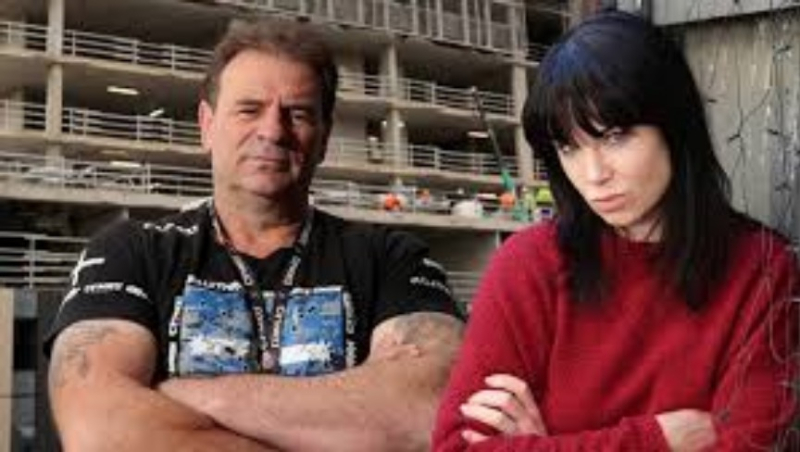 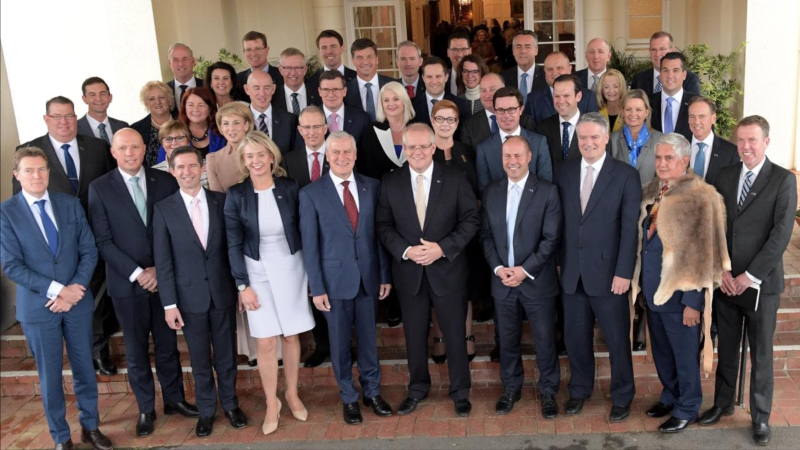 ...and the all-important women-only shot. 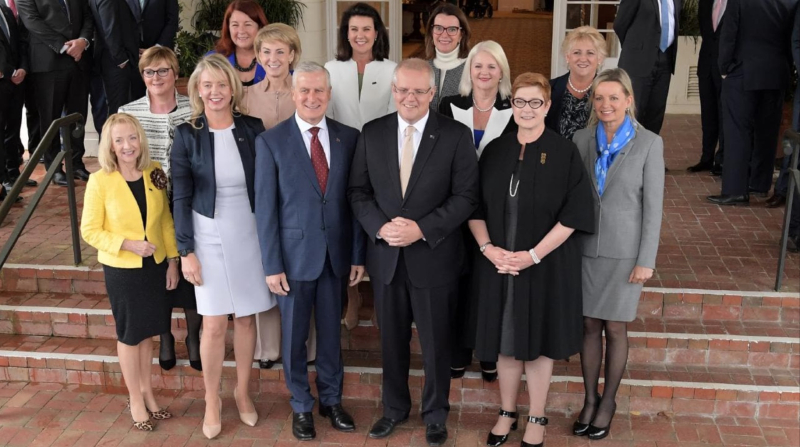