Australia's most decorated soldier Ben Roberts-Smith has broken his silence following further allegations that he committed serious war crimes. In an exclusive interview with 7NEWS' @ChrisReason7 he rejected all allegations & vowed to clear his name https://t.co/mqKUQqIsB6 #7NEWS pic.twitter.com/HKdhoyN7NL

For a bloke who was given 3 minutes to chat with The President as he walked between engagements - on a day dedicated to celebrating the US/Australian relationship - Paul Murray got the tone and content pretty much spot.

A lousy bunch of jealous whingers is piling all sorts of crap on Paul and Sky.

The ABC's Michael Rowland, "I’m sorry. This is just embarrassing".

Nine's Latika Bourke "This 'Exclusive' from Sky New embarrasses us all.  Cultural cringe at its worst".

Media Watch had a go, Ten's national affairs editor Hugh Riminton piled on and The Australian Financial Review said Sky had sent "a bona fide halfwit to confront the leader of the free world".

Paul asked President Trump an insightful question about China, why he has a better relationship with Scott Morrison than Turnbull, he pinned the President down on a trip to Australia - and all of that with a positive tone that was consistent with a chat in the garden - after the formal media event with the press pack.

Other media had 30 minutes in the White House Map Room with The President and our Prime Minister.  The transcript runs to 5,000 words, plenty of questions were asked and answered.

Paul Murray got 3 minutes on the fly - what more did the critics want? 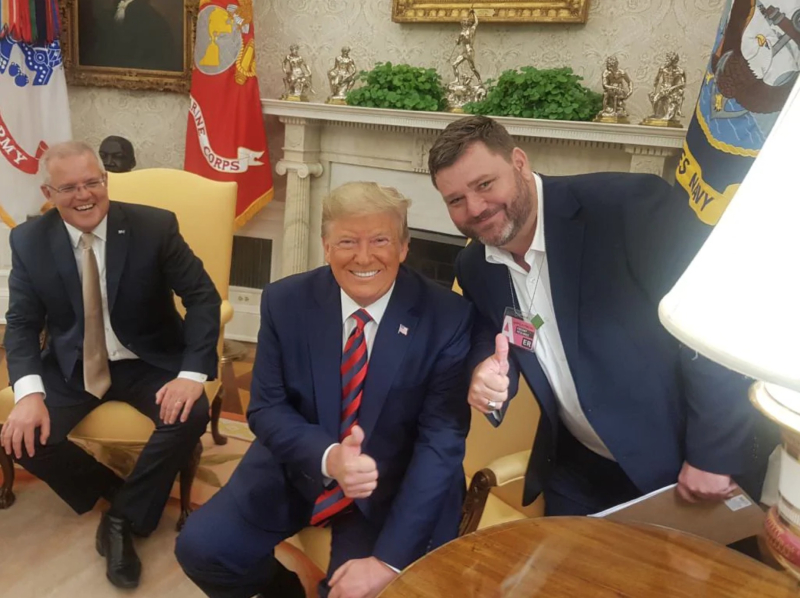 Imran Khan - "There is only one Islam". No moderate. No extreme. Just Muhammad's 7th century Islam..

It's excruciating to watch her performance at the United Nations.

I'm sure she believes what she's been told - and thus what she says.

But the catastrophism and strident outrage isn't doing anyone any good - especially the little girl herself.

She sounds very disconnected from reality.

I hope she can put the campaign on hold, go outside, play with other kids and enjoy her childhood.

"John Anon" served 14 years in the ADF, 9 years as a Royal Australian Regiment infantryman and 5 years with the Special Air Service Regiment. 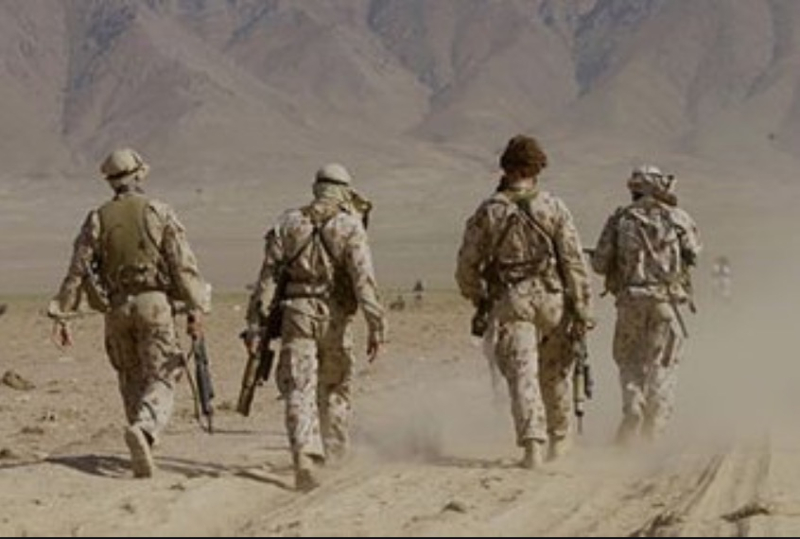 The Special Air Service Regiment seeks out and destroys Australia’s most dangerous enemies.

It targets the leaders of terror organisations who are shielded by suicidal, heavily armed Jihadis embedded amongst co-operative “civilians”.

Our enemies don’t like us and they do their best to kill us with no moral restraint and complete impunity.  The Mujahideen don’t have much use for a Human Rights Commission.

The SAS cannot fight enemies like that by adhering to normal Western moral standards. If we did, it would be leveraged as a weakness by the enemy.  We have to keep them guessing about our limits.  I wouldn’t deploy if I was working with blokes who operated like predictable Mr Nice Guys.

The ADF is currently conducting a full-blown enquiry into "rumours of possible breaches of the laws of armed conflict” by Australian special forces in Afghanistan.  We are alleged to have operated with “disregard for human life and dignity”.  Fair enough.  I don’t know one bloke I served with who has a high regard for the lives of terrorists.  There’s nothing dignified about IEDs and their fighting methods either.

We are not sent out to deliver a personal dignity entitlement to our enemies.  We go out to kill them.

Right now the Chief of Defence Force is doing immense damage to our troops deployed in Afghanistan.

Australian taxpayers are paying for ads in the Afghani press encouraging Afghanis to dob in Australian troops for war crimes. How idiotic is that?  What a propaganda gold mine;  and you can be certain the enemy will be using it against us.

The Australian enquiry will receive heaps of responses from the enemy, let’s face it they are embedded among the local Afghans.

And what will it achieve?  How do you think Australian troops will respond to allegations against them from the enemy? This might be difficult for outsiders to hear, but even if boundaries have been overstepped, unless the entire patrol turned on each other there will be little chance of any evidence to support any claims made by the enemy or Afghan civilians.

SAS troops obey orders.  We go where we’re ordered to go and act as we’re ordered to act.  There’s no allegations that I know of that say SAS troops have failed to obey orders.  Whatever’s been done has been the work of a highly disciplined team of professional, accountable soldiers operating within their own internal chain of command - and that goes all the way to the top.  Smiling politicians are always on hand to get their photo taken and congratulate us on our results.  Well God help any ADF leadership that tries to hang a few young troopers out to dry.

So what are we stuck with?

The ADF’s investigation into the rumours has already been leaked to Fairfax and the ABC who've made the leaked material public.

As a result of Fairfax and the ABC’s reports, the Russians have now joined in to make life more difficult for us in the field.

On Saturday the Russian Foreign Ministry issued a statement about “The crimes committed by Australian troops in Afghanistan”.

Using the ABC and Fairfax’s reports, the Russian statement said Australians have engaged in “systematic, unauthorized and groundless use of weapons, particularly against  civilians.”  It quotes the ABC as the source for “shocking facts about cold-blooded murders committed by Australian soldiers in Afghanistan”.

Total bullshit, created by our taxpayer funded broadcaster to be used by our enemies against us.

The ABC is always going on about Russia and scandals.  Looks like they've made one of their own.

There are plenty of problems in Australian society.

There is definitely a problem in the ADF.

But it’s not the war fighters.

It’s our leadership and the tone they set - from the PM down.

Ben Roberts-Smith VC MG categorically denies the allegations made by the Defendant(s)* Fairfax, its journalists and its new owner Nine in last night's 60 Minutes program.

Ben puts his name to his statement - unlike his accusers.

I cannot believe that the ADF has remained silent when - according to The Defendants - serving members are speaking publicly about unsubstantiated allegations which are the subject of incomplete and incredibly zealous official enquiries.

The ADF has said nothing about the presumption of innocence.

Who'd serve their country if this is the way our most decorated hero is treated? 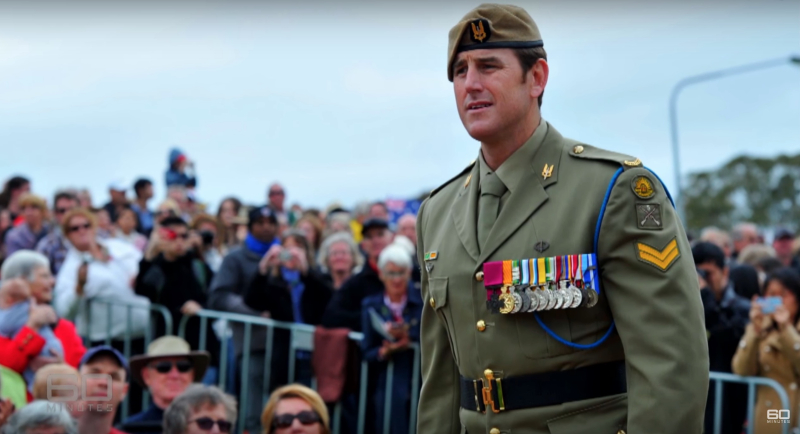 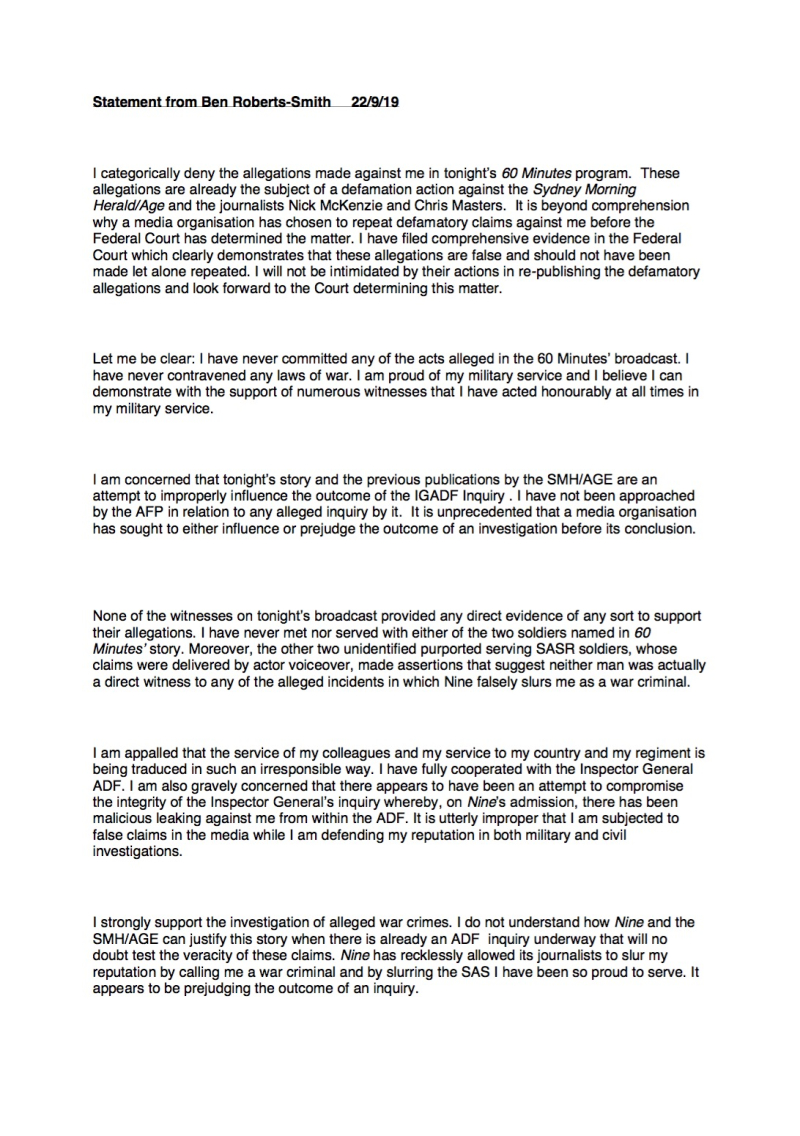 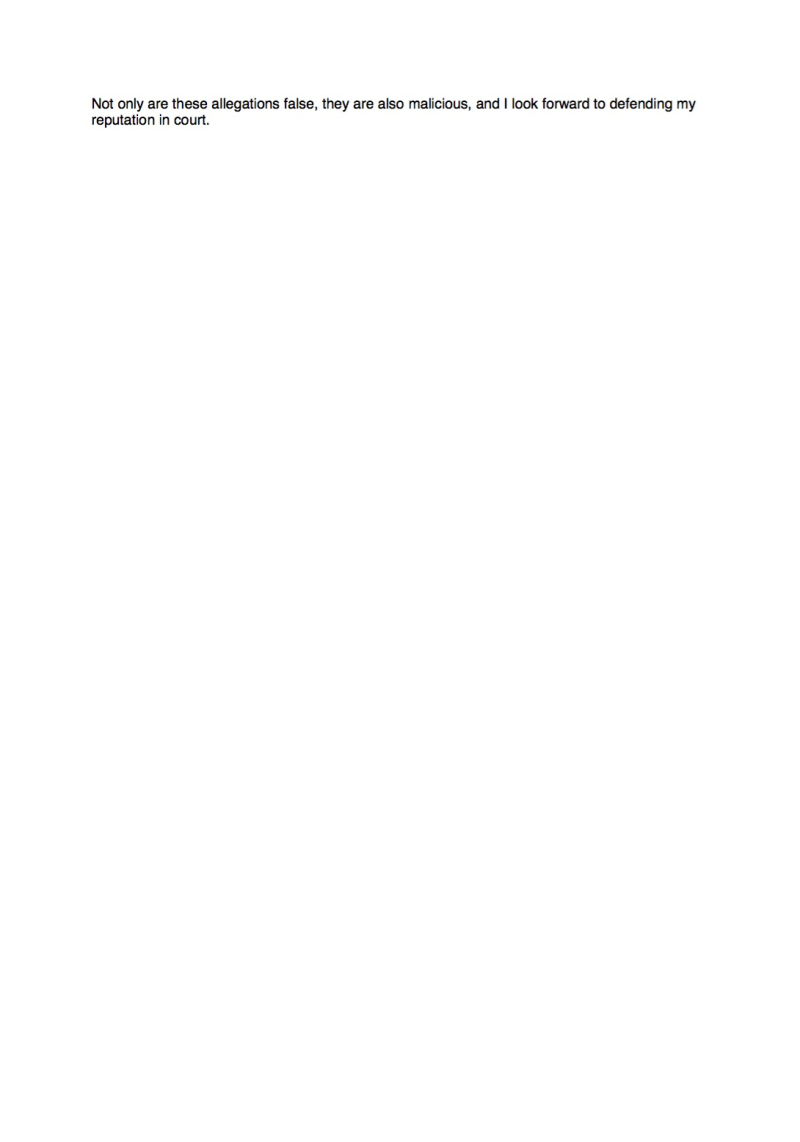 Vindictive Fairfax has another go at defamation litigant Ben ...


https://www.michaelsmithnews.com › 2018/08 › turnbulls-spirited-lack-of-...
Aug 13, 2018 - Ben is suing Fairfax for the mother of all defamation payouts. He's also instructed his lawyers to brief the Australian Federal Police on the prima ...
Would I serve with Ben Roberts-Smith? In a heart-beat ...

He has no shame. 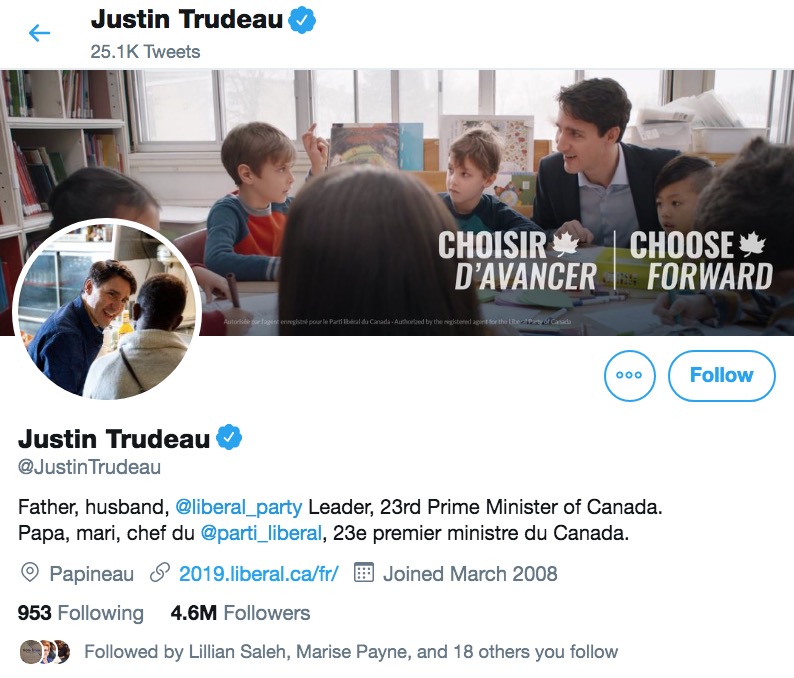 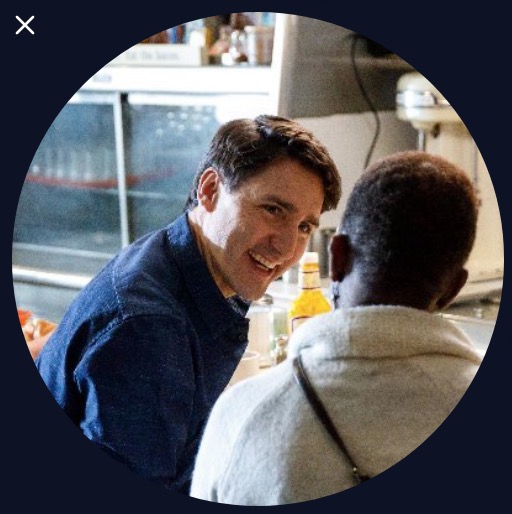 UPDATE - thank you to James Morrow for this quick quiz. 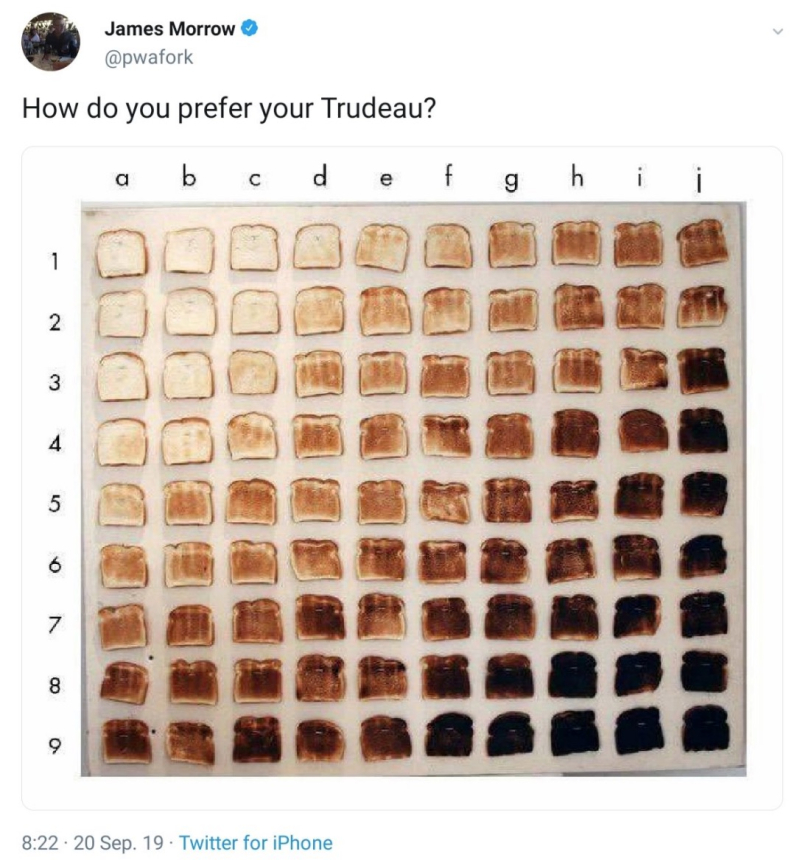 #OUTSIDERS Has any one seen PVO?
Is he still in that little room waiting for the 'Real Action'? #AUSPOL #INSIDERS Oh dear how embarrassing to the little Professor from #PERTHNEWS
Did the media pack try and shake him off? LOL pic.twitter.com/9w5BQFkNUG

Creepy Joe "If the prosecutor's not fired, you're not getting the money"

This is the real and only story! pic.twitter.com/4z8eOcm6PA

Goodness me, the poor darling's lost it.

ABC "News" is worried about the state of Sydney's gay clubs 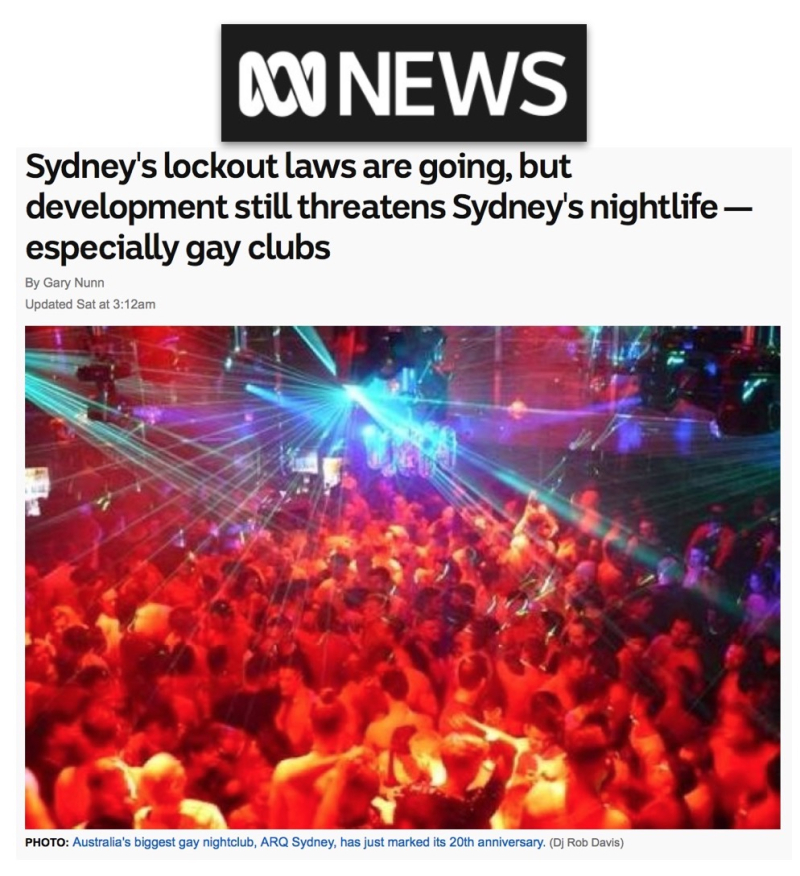 It's rare that good news leads the news agenda, but when it comes to Sydney's decimated nightlife, a recent series of positive stories mark a distinct departure from five years of doom.

Australia's "only global city" (as NSW Premier Gladys Berejiklian perhaps generously called it) had a night-time economy on its knees since the introduction of 2014's lockout laws: 176 venue closures and a loss of almost half of its live music venues.

The first piece of good news is, of course, that they'll be rolled back in all areas except Kings Cross, where the worst alcohol-fuelled violent incidents occurred.

It has been welcomed with much fanfare from the city's embattled creatives, DJs, music makers and venue owners.

Without wanting to be the party pooper here, the night-time economy of all Australia's major cities must resist an even bigger threat, one that's wreaking havoc on the individuality and joyously hedonistic landscape of every global city worldwide: development.

That is, however, where the second piece of good news comes in — it's a rare and underreported good news story about Sydney's nightlife, and it comes from its gay village on Oxford Street in Darlinghurst.

The threat of gentrification

It's an outlier among gay clubs in Australia and worldwide, which are closing at an alarming rate.

Sanitising nightlife comes at a cost

Moves to clean up nightlife precincts are suppressing one of their fundamental appeals — the opportunity for behaviour that transgresses social, cultural and even legal codes.

When ARQ opened in 1999, there was an unequal age of consent, no legal recognition for same-sex couples and no hook-up/dating apps.

Gay clubs like ARQ were essential places for the LGBTQI community to meet, connect, hook up and form solidarity and supportive friendships in less-enlightened times.

Since then, much has changed. What's impressive about ARQ is that it has weathered a perfect storm of factors that've destroyed gay scenes worldwide.

These include hook-up apps like Grindr, "chemsex" parties hosted in homes, stay-at-home drugs like ice overtaking dance-floor drugs like ecstasy in popularity, and millennials preferring festivals.

Perhaps surprisingly, equality also plays a part. In an age of same-sex marriages and other legal protections, there's more integration and assimilation on the nightclub scene.

The threat of gentrification lurks, though.

PHOTO: It is estimated that more than 150 venues were forced to shut due to the lockout laws. (Supplied: Destination NSW)

As rents have skyrocketed and alcohol restrictions in NSW have stung profits, it must sometimes be tempting (and financially seductive) for nightclub owners like ARQ's Shadd Danesi to sell-up.

Panicked rumours of ARQ being sold often circulate around the LGBTQI community.

"We've heard rumours for the last 10 years that ARQ's closing; we've no intention of closing in the near future," marketing manager Jimmy Dee said.

Sydney is bucking the trend — for now

That's the near future, but what about the medium term? Another good news story provides some reassurance.

Lockout laws have been blamed for the death of Australia's leading red light district, but they only tell one part of the Kings Cross gentrification story.

When The Midnight Shift, Sydney's only other major multi-level gay club on Oxford Street, closed in October 2017, the LGBTQI community kicked up enough fuss for it to be reborn as a gay club again.

Against all odds, it was — it's now called Universal.

Many thought it'd be made into yet more luxury flats or something gentrified, like grungy after-hours gay club The Phoenix, which in recent years transformed into a bougie straight cocktail bar.

Except, it wasn't. The site, to this day, stands empty, just the rubble of the former much-loved, well-attended 163-year-old venue.

If it ever does happen, it's a story repeated in major cities everywhere — the middle class lives of 43 residents are deemed more important than the thousands of clubgoers entering their refuge, their safe haven, on a weekly basis.