No apology to the Jewish community from Jeremy Corbyn, as he is repeatedly challenged over claims of anti-Semitism within the Labour Party

And British Labour trolls are already going to work in coordinated campaign to hose it down. 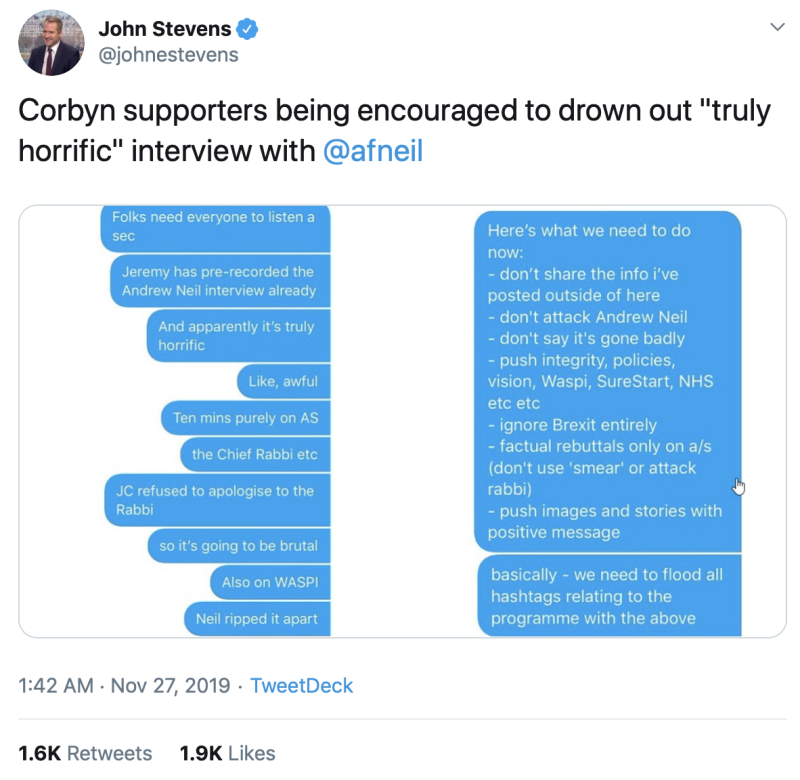 Pamela Anderson gets a reply from the PM over Julian Assange

Nice to see someone get a reply from this government - Dave McAlpine and I've written dozens of letters and emails that've gone unanswered (although I'm pleased to say we now have two government MPs taking up our cause, more on that soon). 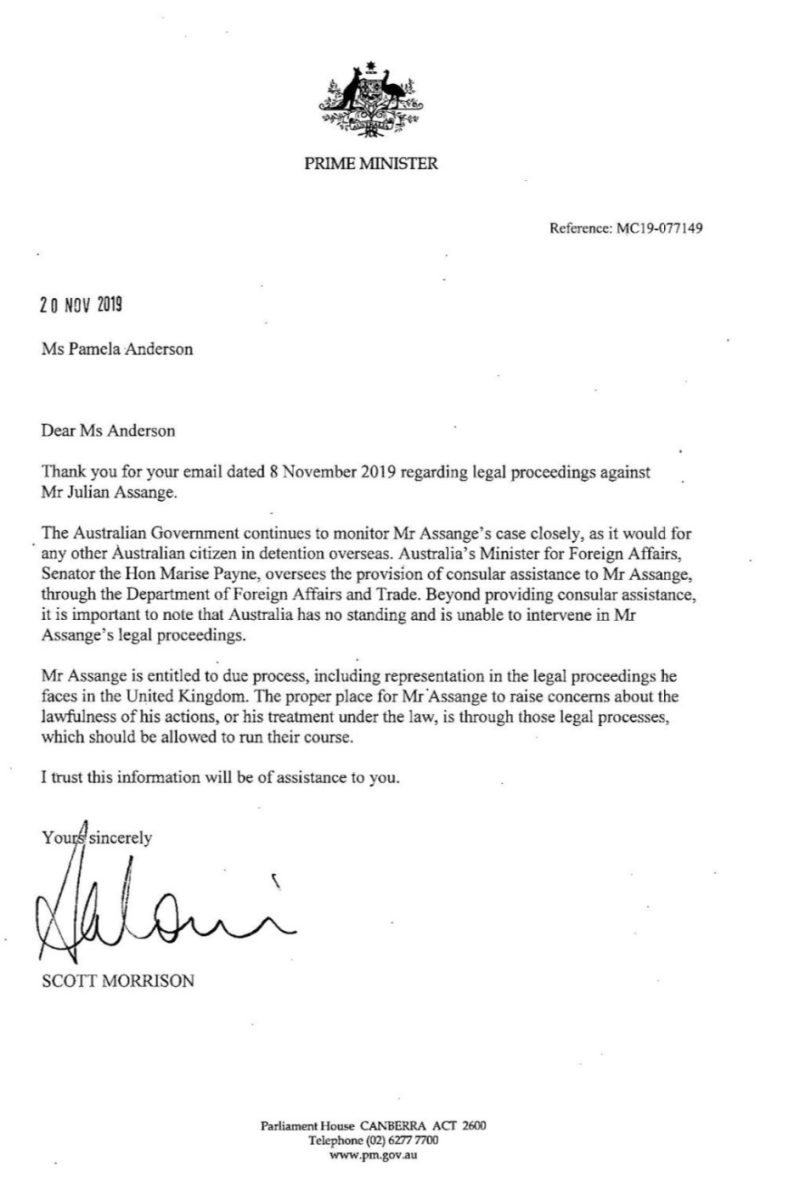 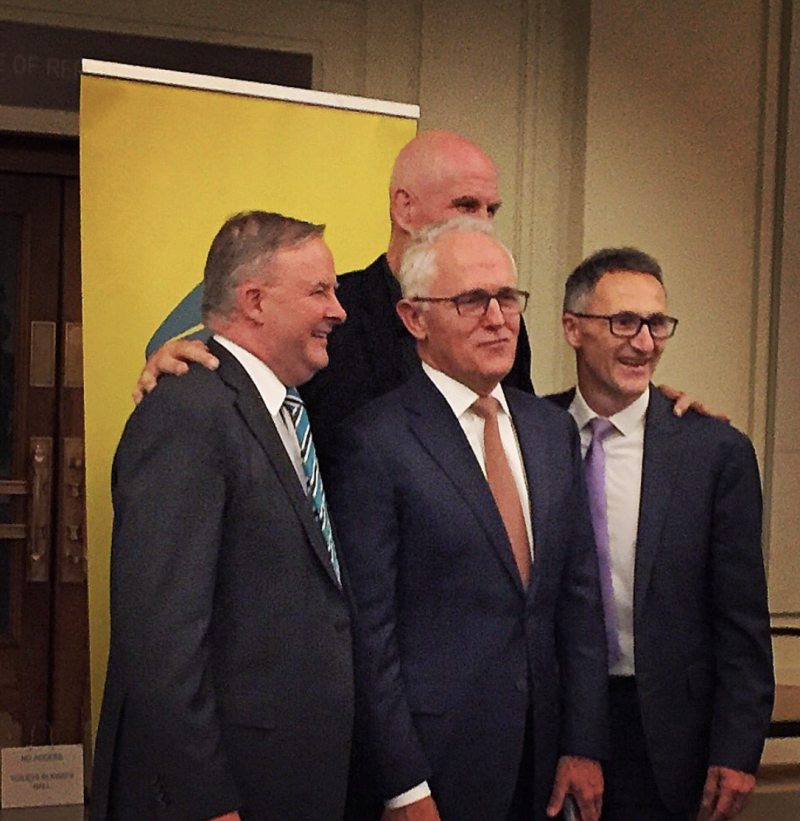 I would much prefer that Therapeutic Albanese condemn British Labour, rather than cosying up to Corbyn. 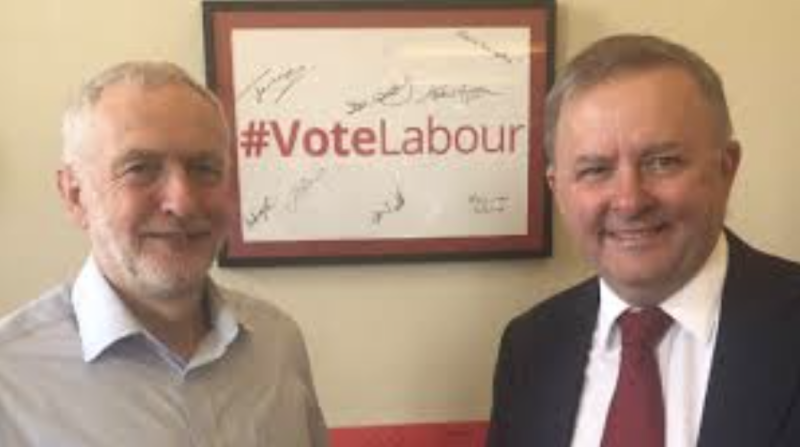 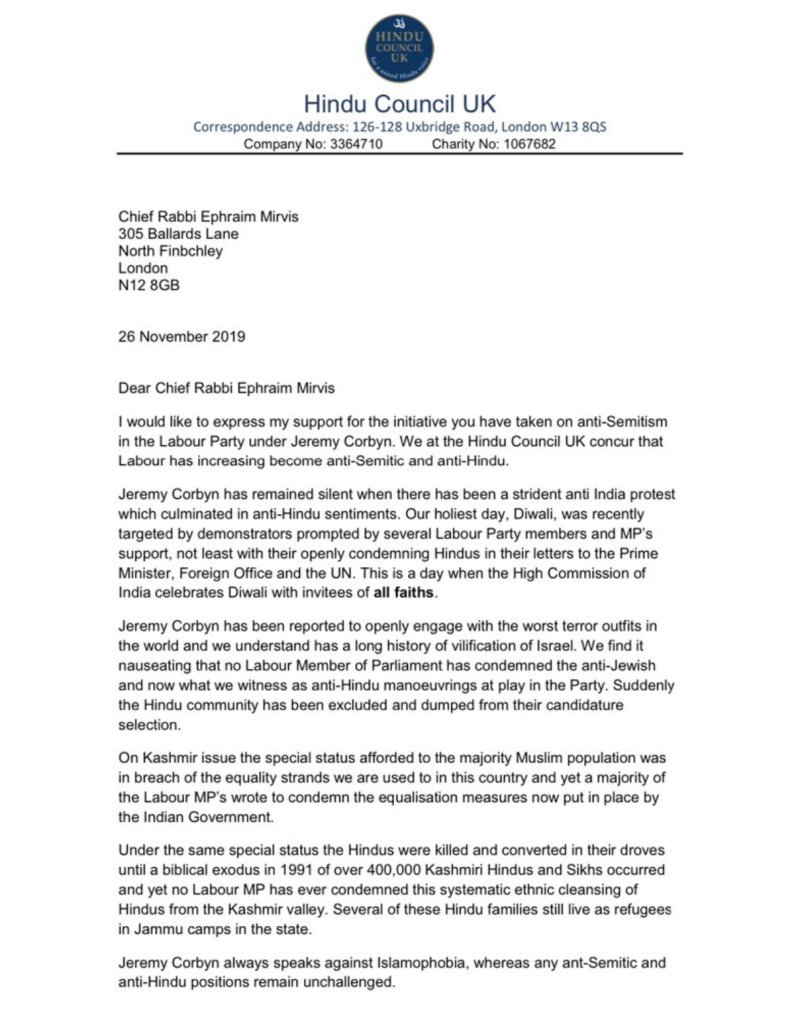 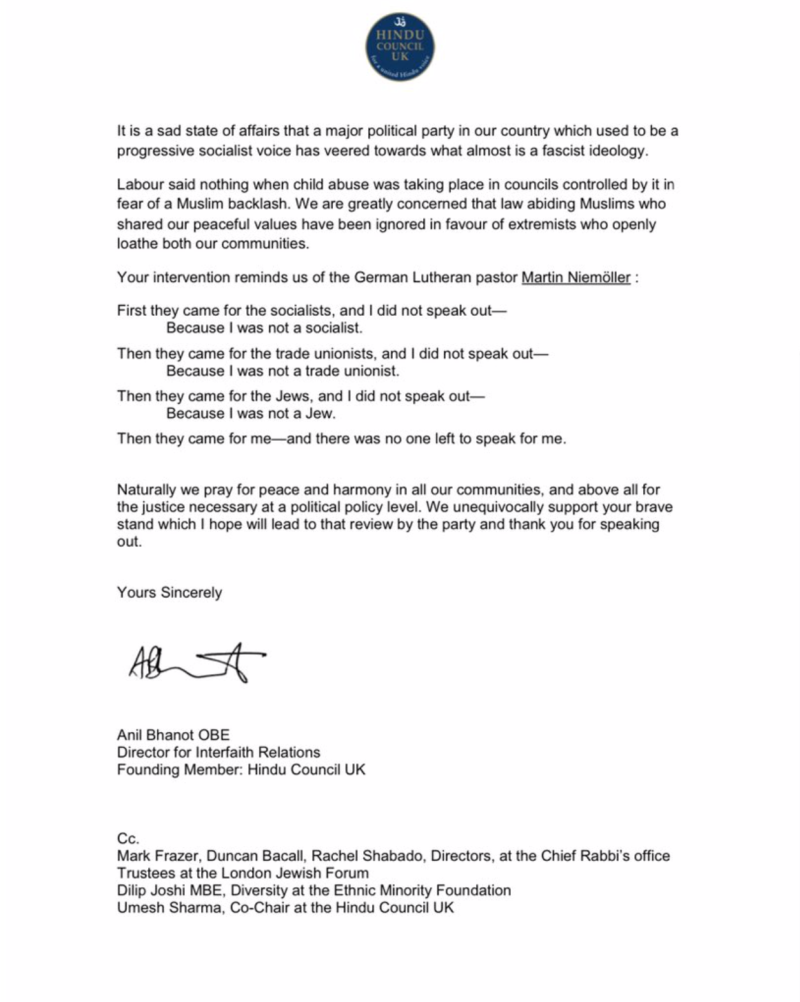 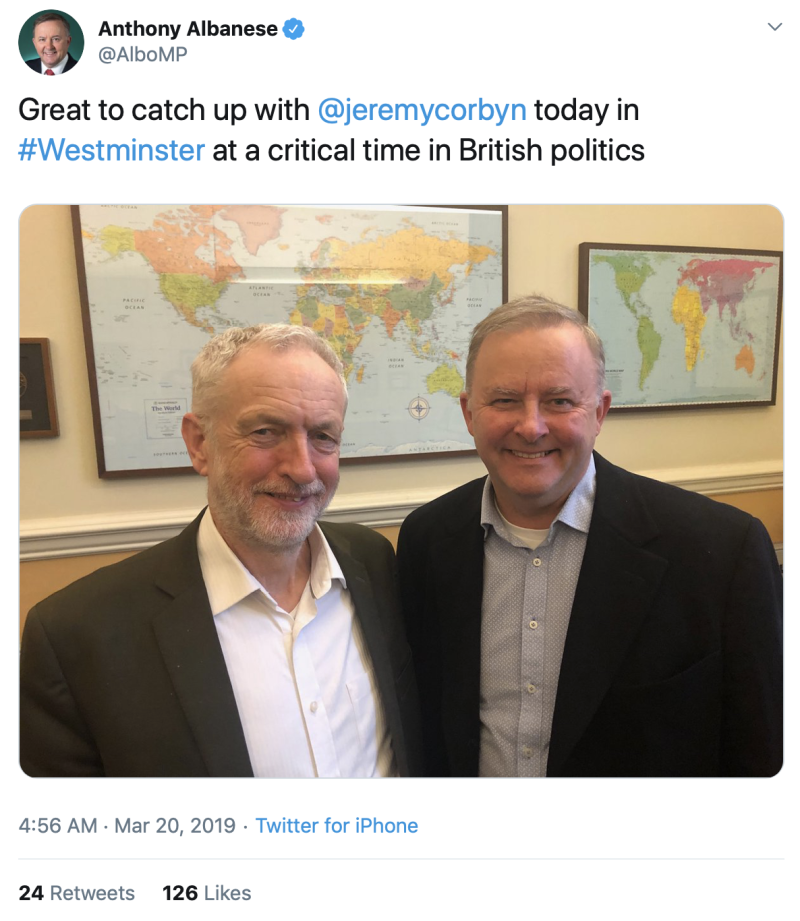 South China (including map of Tassie) 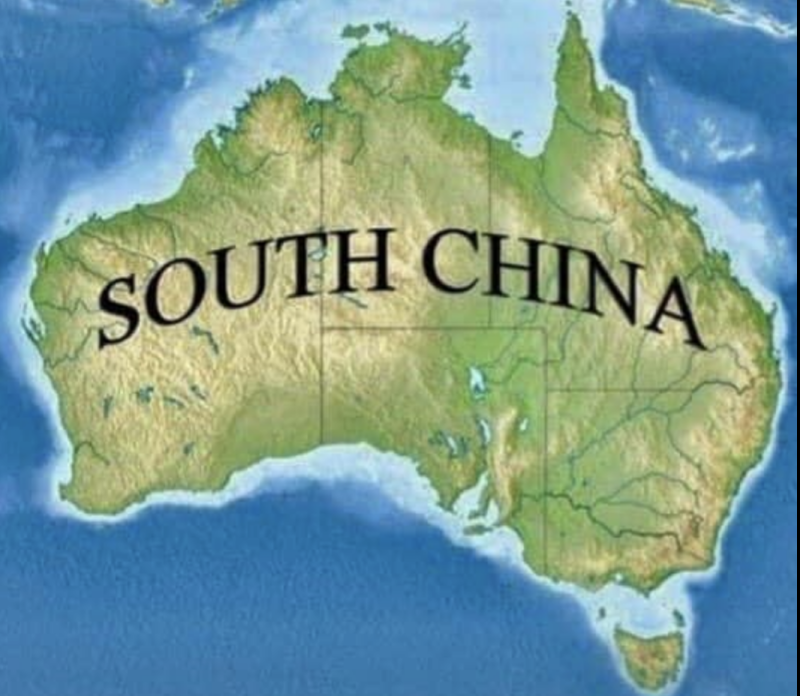 NOW UPDATED - 2GB (9GB) goes soft left over Christmas. And the leaks keep coming. A knife in Alan Jones's back from his bosses.

The Macquarie (Nine) national sales director Mark Noakes got his dates wrong with the email I posted yesterday - early this morning he sent a follow-up to his direct reports that said:

Just been advised its from next Thursday 5th/12 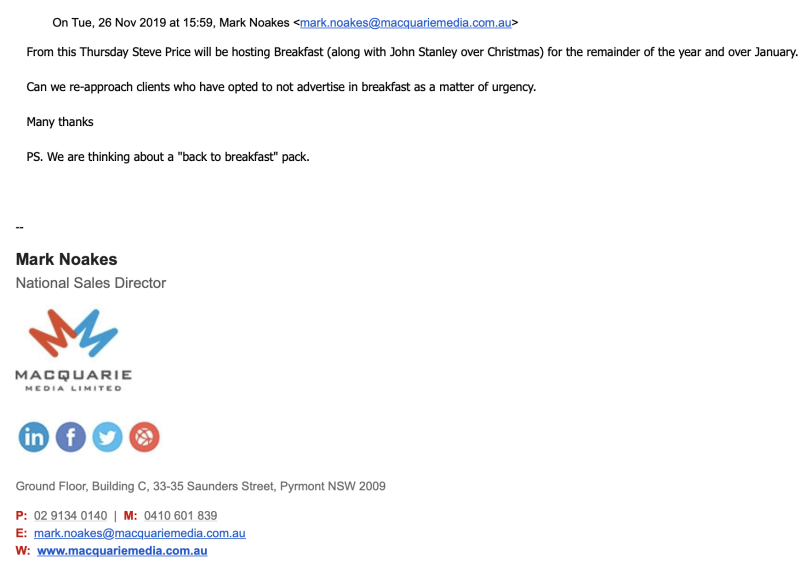 Much more will emerge this week in the media and from government ranks about that other forgery.

For now, here's the news that NSW Police is investigating the apparent use of a forged letter by Angus Taylor MP. 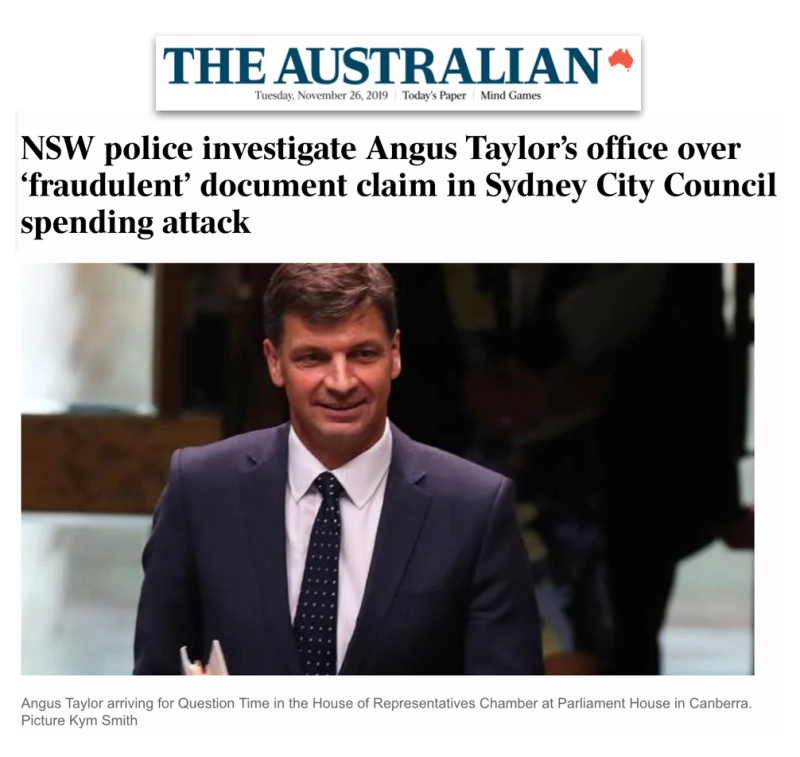 NSW Police is investigating the office of Energy Minister Angus Taylor over claims it doctored an annual report produced by the City of Sydney.

A spokeswoman for NSW Police said a strike force had been formed to find out whether a City of Sydney document was altered by Mr Taylor’s office and given to the media.

“The NSW Police Force is in the early stages of investigating information into the reported creation of fraudulent documentation,” the spokeswoman said.

“Detectives from the State Crime Command’s Financial Crimes Squad have launched Strike Force Garrad to investigate the matters and determine if any criminal offences have been committed.

“As investigations are ongoing, no further information is available.”

Anthony Albanese leapt on the investigation in Question Time to ask Scott Morrison what action he will take against the cabinet minister.

“Why is he still sitting there? When will you stand him aside?” the Opposition Leader said.

The Prime Minister said the investigation was a matter for “authorities in other place”.

“The matters that the Opposition Leader refers to have not been provided to me or been presented to me by the NSW Police. I have not been advised of those developments,” Mr Morrison said.

The incorrect numbers were written in a letter to the council and given to The Daily Telegraph.

Labor referred the matter to police.

Hang on … it that THIS JUDGE?
Shouldn't that rule him out of making these type of decisions?
*Ping @mpsmithnews pic.twitter.com/4N8J9KNfxS 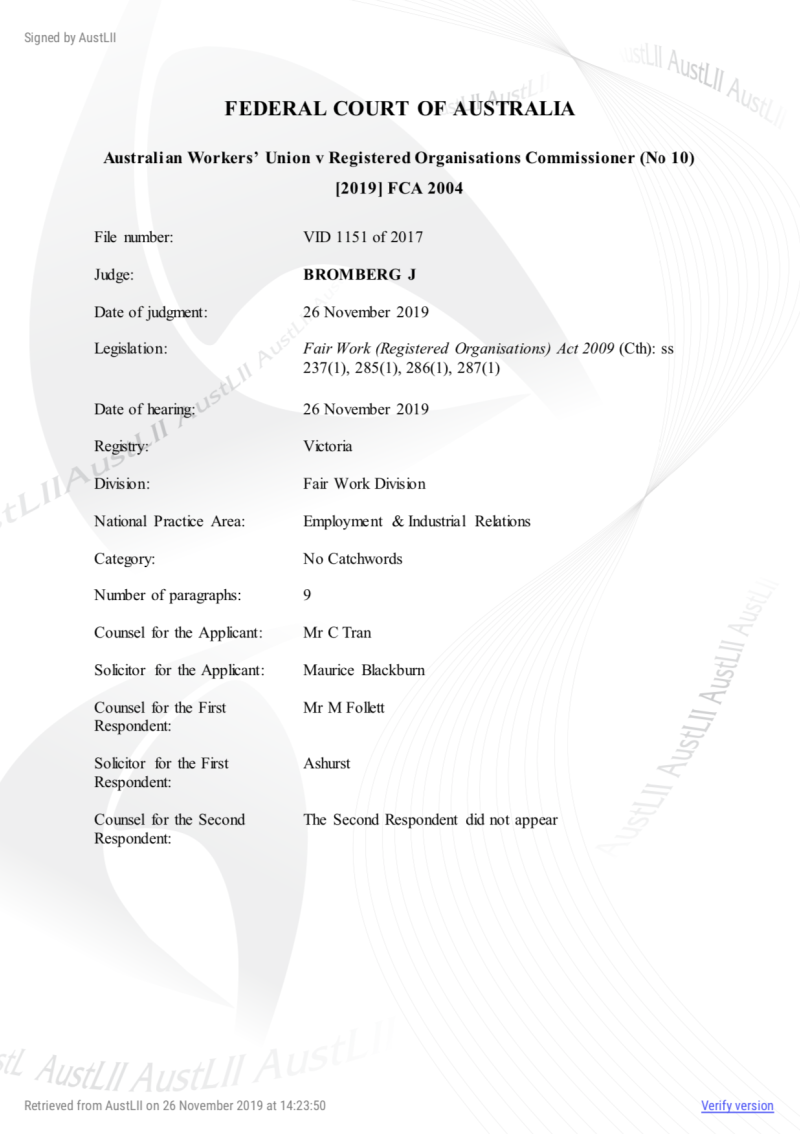 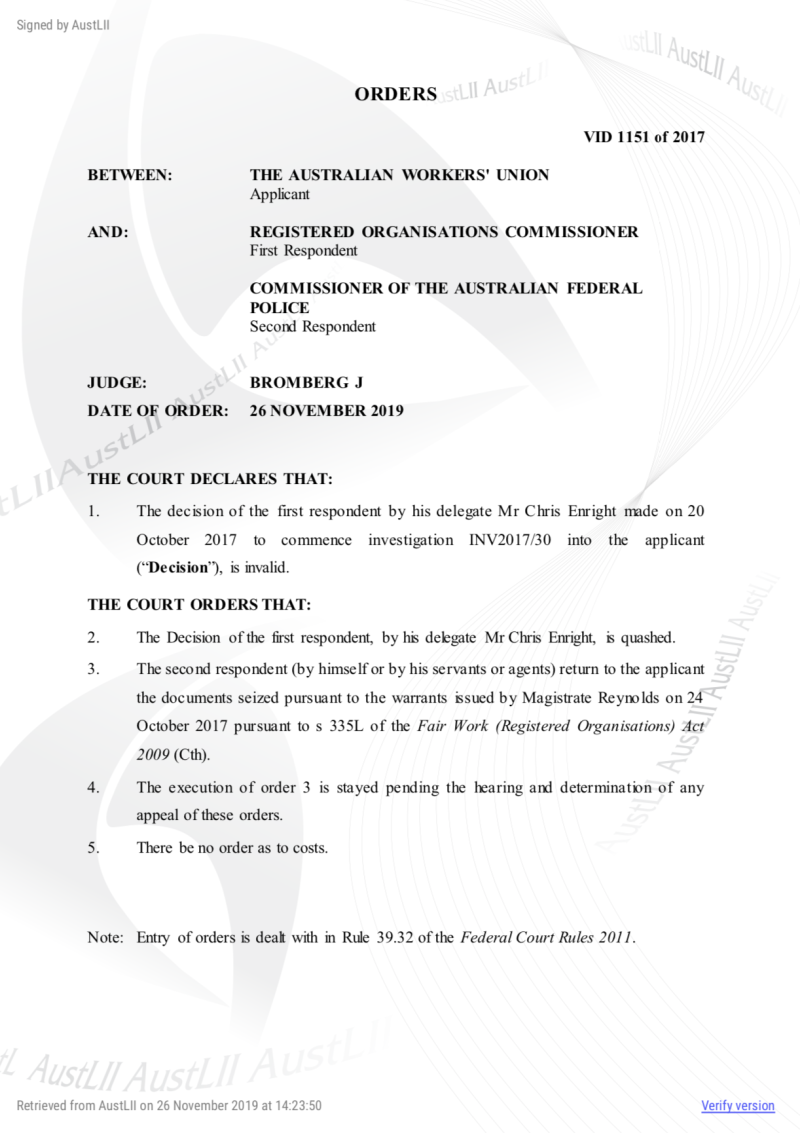 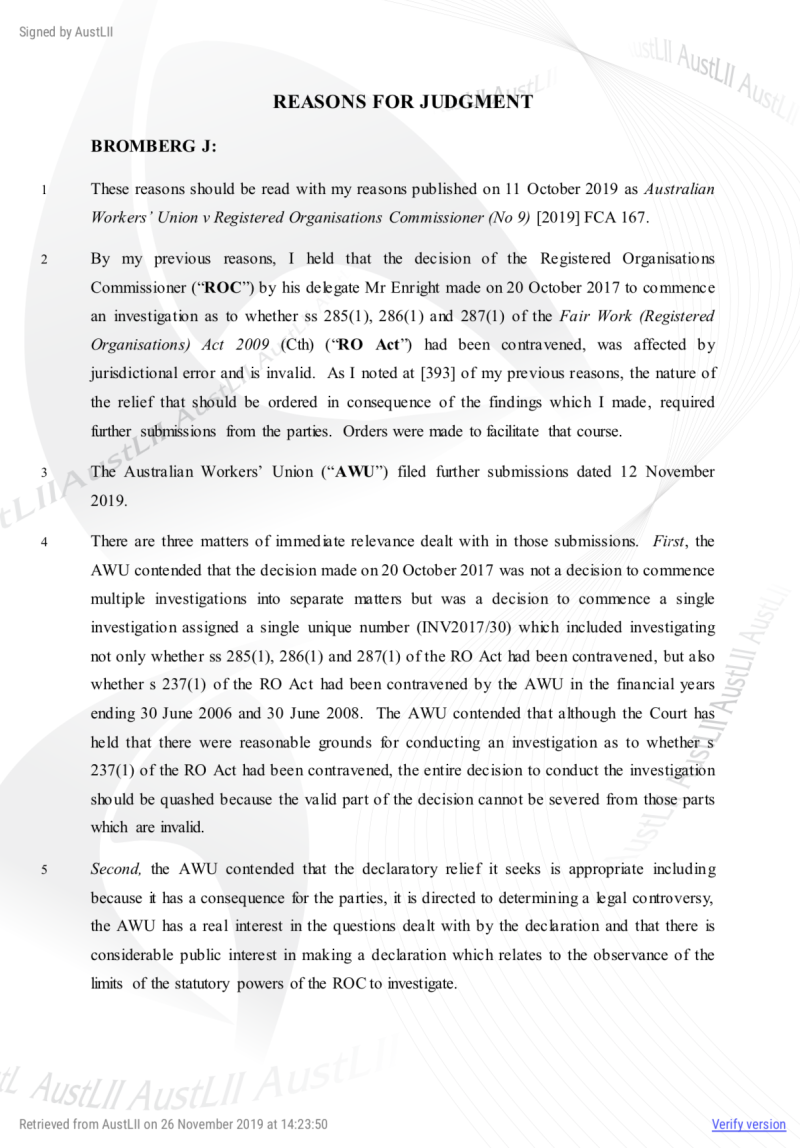 New RNC ad uses Democrats' own words on impeachment against them pic.twitter.com/GDm8xgJ0wR

I first published this piece on 21 July 2013, it's relevant today as the media and prosecution authorities examine Ms Gillard's behaviour in shutting down enquiries into The AWU Scandal.

McTernan declares his love for Julia Gillard and her niceness.

The Sunday Telegraph today promotes the first column from a man who declares his love for Julia Gillard, mainly because she's nice.   His love is undeterred by what he describes as the almost physically-tangible affection he observed between her and Barack Obama.   John McTernan variously says these things - here are his words in a precis form:

There are few genuinely nice people in politics. Julia Gillard is the exception.

(proof of her niceness is found in her) quick-witted, sharp, funny generousness;  her charm and her teasing humour; her grace her wit and lightness of touch - this is the Gillard I know, love and am loyal to.

Most people have had bosses who have lost their tempers at one point or another - often with some justification - but Julia never ever lost it.

Maybe not with her staff John, but I wouldn't bet my howse on your proposition more generally.

This article was published in The Australian on 3 September, 2010.  The month that McTernan started working for Gillard and Glenn Milne lost his media jobs.  That's when I tried to broadcast Bob Kernohan's interview on 2UE.

APPROACHING 8am last Monday, John Hartigan was walking into his office after a session of boxing, stairs and weights at a park in Sydney's inner-city Glebe when his mobile phone rang. It was Julia Gillard.

"I presume you know why I'm calling," the Prime Minister said.

Hartigan, chairman and chief executive of News Limited, had no idea. He soon did, as the Prime Minister voiced her displeasure at the publication that morning in The Australian of a column by Glenn Milne, which revived 16-year-old allegations about Gillard's one-time relationship with former unionist Bruce Wilson.

According to Hartigan, Gillard put a series of demands that she wanted addressed in 15 minutes. The deadline was later pushed back to 9am.

As well as a public apology and the Milne article being taken offline, she wanted a commitment that the allegations never be repeated again in The Australian. This demand was later extended to all News Limited newspapers and their websites.

"She said they were very damaging accusations," Hartigan said. "She wanted some action and she wanted it quickly."

Hartigan told Gillard he would speak to Chris Mitchell, The Australian's editor-in chief.

Mitchell was at his Manly property on Sydney's northern beaches reading the morning newspapers and drinking tea when Hartigan called and asked him to ring Gillard.

When Mitchell rang and spoke to the Prime Minister, he said, she was "apoplectic". He had been on the end of verbal sprays from Paul Keating, he said, but "they were nothing compared to this".

Asked yesterday for comment regarding the accounts given by Hartigan and Mitchell, a spokesman for the Prime Minister released a one-paragraph statement last night that read: "Those accounts of the conversations are false and inaccurate. Considering what The Australian has already published this week, that's hardly surprising."

The day before, Friday 2 September, 2012, this email was sent by Greg Baxter the News Limited Corporate Affairs boss to Jonathan Holmes of the ABC's media watch.   John is John Hartigan, former CEO of News Ltd and Chris Mitchell is the editor of The Australian. 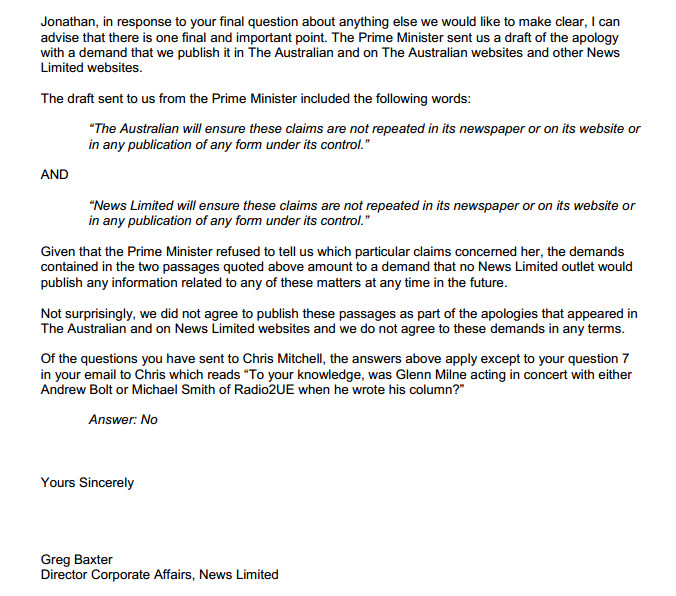 Gillard had much to be worried about.   A very tight lid had been kept on her involvement in The AWU Scandal up until that time and Gillard's job and perhaps her liberty were at stake if the cover-up was blown.

Gillard had successfully used the technique of forcing retractions in 2007 when Glenn Milne's first article on the scandal appeared, just prior to the Rudd election.

Glenn wrote that Gillard had incorporated the fund used by Wilson, the AWU Workplace Reform Association.   That resulted in this retraction way back then:

"The first edition of today's Sunday Mail contained an allegation that Ms Gillard had incorporated funds used by Mr Wilson. The Sunday Mail acknowledges that this allegation is entirely untrue. This error was made by Sunday Mail."

Let's deal with the incorporation and fund words first.   She got her retraction from the Sunday Mail in 2007 because she said she did not incorporate fund(s) used by Mr Wilson.

This is what she said on 26 November, 2012 after more and more details had publicly emerged about her wrong doing:

Second word.   Fund.   Is it reasonable to talk about the entity that Gillard set up as a fund?

Well, let's turn to Gillard's own way of describing the entity she set up. This is Gillard in her own words at her Record of Interview on 11 September, 1995 on her departure from Slater and Gordon, a Record of Interview that she knew existed but that wasn't made public until one year after I left 2UE and Gillard successfully made her demands of News Limited.

'It's, it's common practice, indeed every union has what it refers to as a re-election fund, slushfund, whatever, which is the funds that the leadership team, into which the leadership team puts money so that they can finance their next election campaign.'

Gillard, in her own words - incorporate and fund.  She knew it.  She knew what she had said in her recorded departure interview from Slater and Gordon.  She knew it was taped.  Media enquiries into the affair and the likelihood that they would uncover the evidence she knew existed must have worried her sick.

Evidence like this, released by Nick Styant Browne in November, 2012. 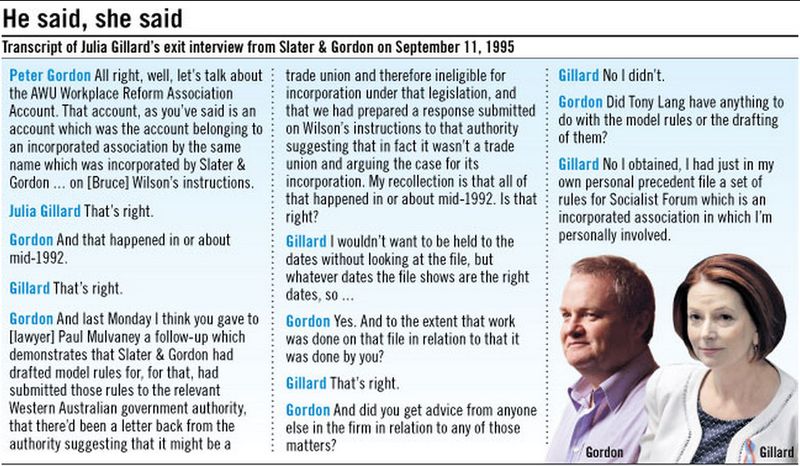 And at the time that she hosed down News Limited with her demands to retract, her refusal to specify what allegations she objected to, her demands for an abject apology from News Ltd and the unmet demand it never again publish anything to do with the story again, none of these details were publicly known.


All of those things had been kept a pretty closely guarded secret for nearly 20 years.  Gillard had much to gain personally by shutting down enquiries into her conduct.  And her techniques worked, aided by so many in the media who stood by and let it happen.

Hedley Thomas was sent a series of questions by Jonathan Holmes from the ABC's Media Watch on 25 August last year.   I reported on Hedley and the Media Watch enquiries after republishing this editorial from The Australian.   Hedley said this: 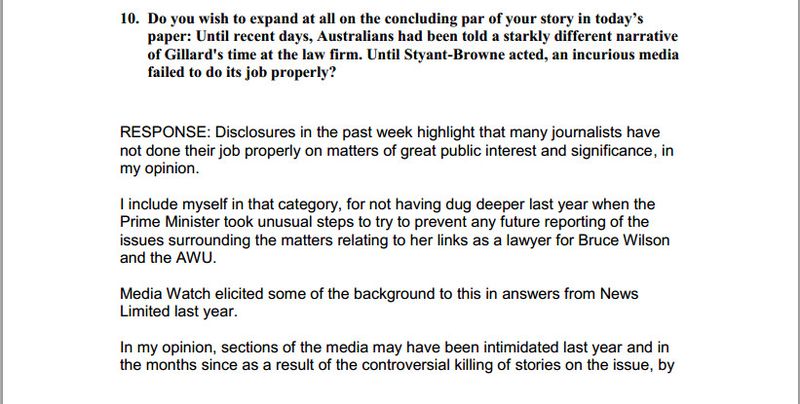 John McTernan calls himself a journalist.   What a disgusting claim.  Mr McTernan represents all of the spin, the denials, the threats, the lies, the intimidation and other bad character traits that make up Labor's "whatever it takes" ethos.   It's the opposite of journalism.  And he reinforces all that today in the Sunday Telegraph with his lover's soliloquy to Gillard's niceness and the cover up.

Well she may be nice to you John, but moral bankruptcy and atrocious conduct aren't fixed by a coating of niceness.  And she would never have been PM if real journalists hadn't been shut down by the likes of you and others who actively worked to cover up the extent of her immorality. 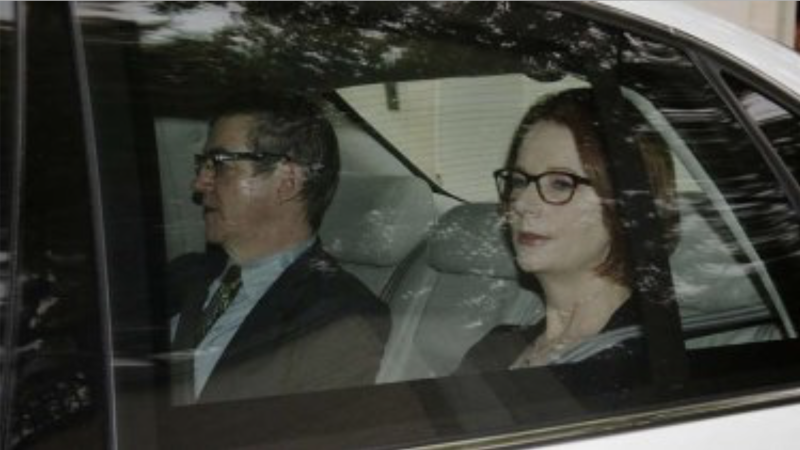