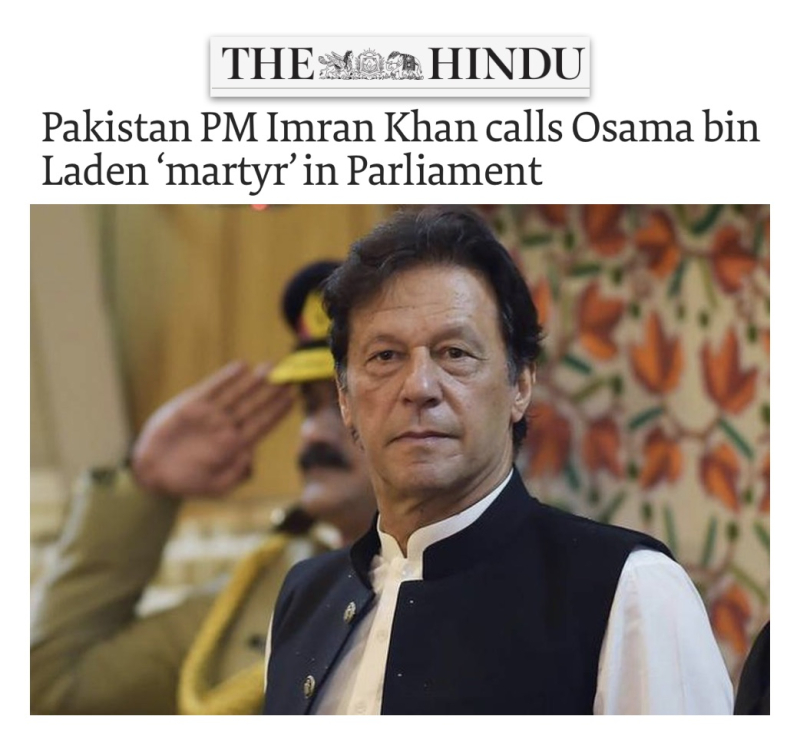 Speaking in parliament during the budget session, Mr. Khan said the American forces entered Pakistan and killed bin Laden without informing Islamabad after which everyone started abusing his country.

“I don’t think there’s a country which supported the war on terror and had to face embarrassment for it. Pakistan was also openly blamed for U.S.’ failure in Afghanistan,” Mr. Khan said.

“For Pakistanis across the globe, it was an embarrassing moment when the Americans came and killed Osama bin Laden at Abottabad... martyred him. The whole world started abusing us after that. Our ally came inside our country and killed someone without informing us. And, 70,000 Pakistanis died because of U.S.’ war on terror,” he said.

Bin Laden was killed by U.S. Navy Seals in Pakistan’s Abbottabad in May, 2011.

“Osama bin Laden was a terrorist and our PM called him a martyr. He was behind massacre of thousands,” said Khawaja Asif of the Pakistan Muslim League-Nawaz.

Here's the offending speech - might not be much good to you if you're not au fait with the lingo! 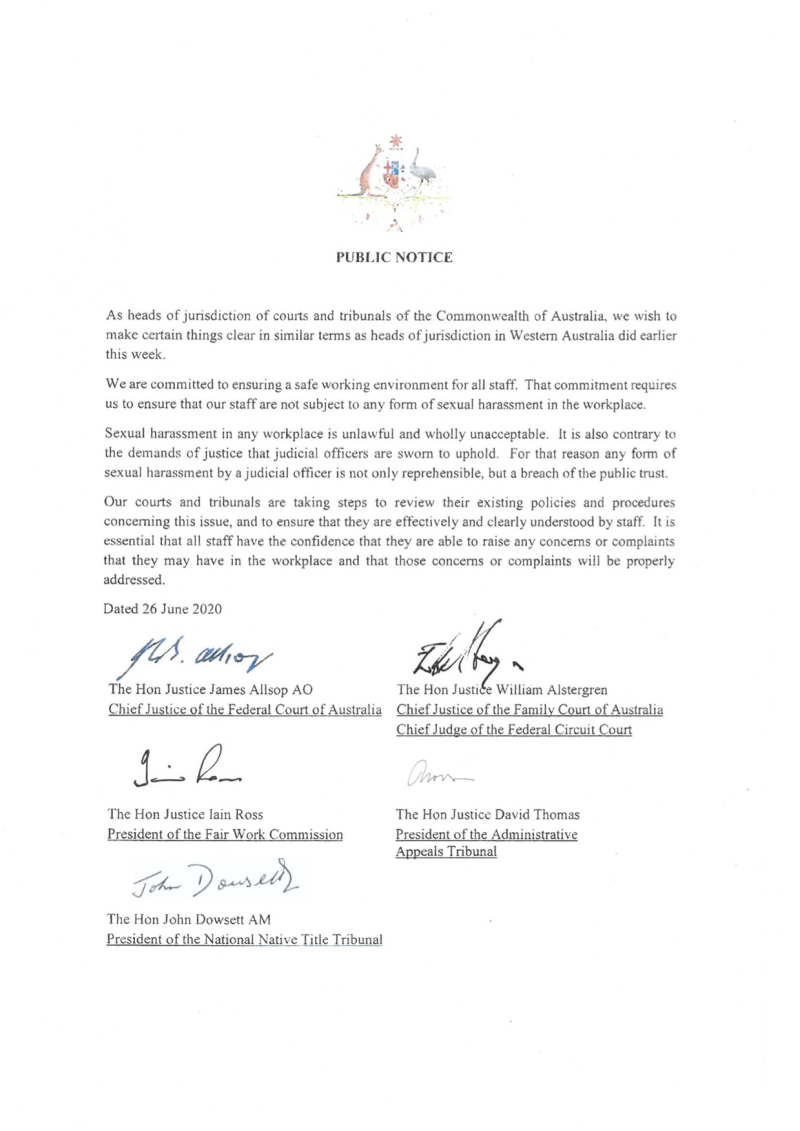 The timing of this 'Public Notice' makes a lot more sense when you look at the front page of The Australian today! 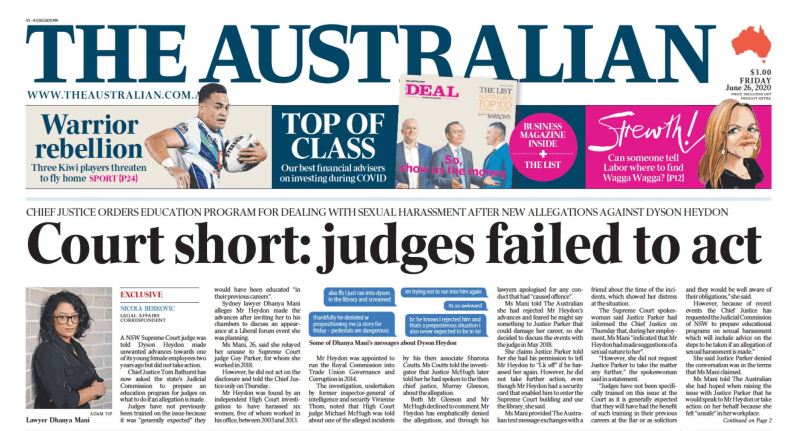 '30% Of Pilots Have Fake License, Paid Others To Take Exams': Pakistan Aviation Minister 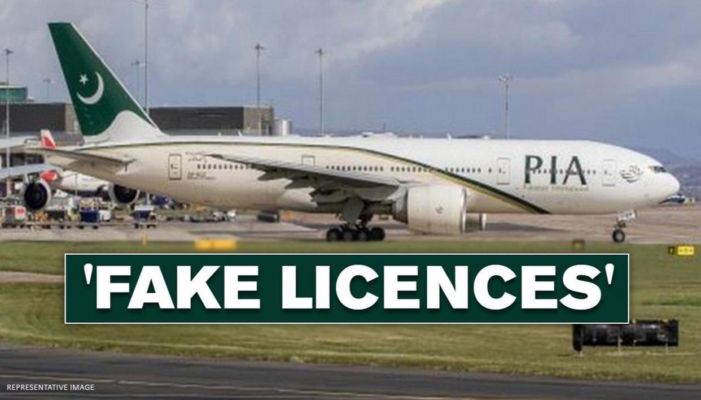 This from India's Daily Hunt newspaper.

Making a huge revelation on Thursday, Pakistan's Civil Aviation Minister informed that more than 30% of civilian pilots have fake licences and are not qualified to fly. Addressing the National Assembly, Ghulam Sarwar Khan said 262 pilots in the country 'did not take the exam themselves' and had paid someone else to sit it on their behalf. The revelation comes in the background of the recent plane crash in Karachi that left 97 people onboard the flight dead.

As per reports in international media, the aviation minister informed that the pilots have zero flying experience and that the Pakistan International Airlines (PIA) has grounded all its pilots who hold fake licences with immediate effect. Ghulam Khan also highlighted that country has 860 active pilots serving domestic airlines whereas there are a number of foreign carriers as well.

Recently, announcing the findings of a report prepared by an investigation team, Aviation minister Ghulam Sarwar Khan told the Parliament on June 24 that the pilot and controller didn't follow the standard rules. Khan said that the pilot and co-pilot were not focused, and were discussing coronavirus as they attempted to land the Airbus A320. The flight PK-303 from Lahore was about to land when it crashed at Jinnah Garden area near Model Colony in Malir, just a minute before its landing.

The minister added that the plane was completely fit for flying and there was no technical fault, contradicting the preliminary reports that the engines had failed. The team investigating the deadly incident analysed data and voice recorders to arrive at the conclusion.

!This is the crash they're talking about - mind-boggling stuff!

Thanks to Jeff of FNQ for the tip.

The US Democrats live on another planet.

Seriously? Tell that to the business owners whose shops were looted and destroyed. pic.twitter.com/o8IVgP9G8I

The Chairman of the Judiciary Committee just called #Antifa "imaginary."

Ask the journalists they've attacked and the owners of businesses they've destroyed. pic.twitter.com/KE5KdaOKWH

Racial equality is no more in California.

California's state legislature has just voted to strike these words out of the state constitution.

“The state shall not discriminate against, or grant preferential treatment to, any individual or group on the basis of race, sex, color, ethnicity, or national origin.”

The legislative file is here
https://ballotpedia.org/California_Repeal_Proposition_209_Affirmative_Action_Amendment_(2020)
The change to their Constitution requires a referendum of the people, which is planned for November.
Racial discrimination is back.

If I ever said something so mortifyingly stupid, the Fake News Media would come down on me with a vengeance. This is beyond a normal mistake. Why isn’t the media reporting it? pic.twitter.com/KkuWLkMfp7

ASIO has conducted a raid on the Rockdale home of NSW Labor MP Shaoquett Moselmane, investigating what is believed to be allegations of attempts of foreign interference into the Australian political system. https://t.co/TWh1KQycs4 @Riley7News #nswpol #7NEWS pic.twitter.com/GywvB2myMm

Counter-espionage agency ASIO is conducting a sweeping investigation into allegations Chinese government agents have infiltrated the office of a NSW Labor politician to influence Australian politics.

Multiple sources aware of the foreign interference investigation said it was scrutinising the office of NSW Labor MP Shaoquett Moselmane as part of one of the most significant inquiries in recent ASIO history.

As part of the inquiry, the federal police raided properties linked to Mr Moselmane on Friday morning, searching for evidence to support allegations of a Chinese government plot unfolding on Australian soil.

The sources said if sufficient evidence was found, the inquiry could ultimately result in an Australian and world first: a prosecution for foreign interference offences arising from an alleged covert Chinese Communist Party plot to influence a serving politician.

Was the term Dixie really that bad? 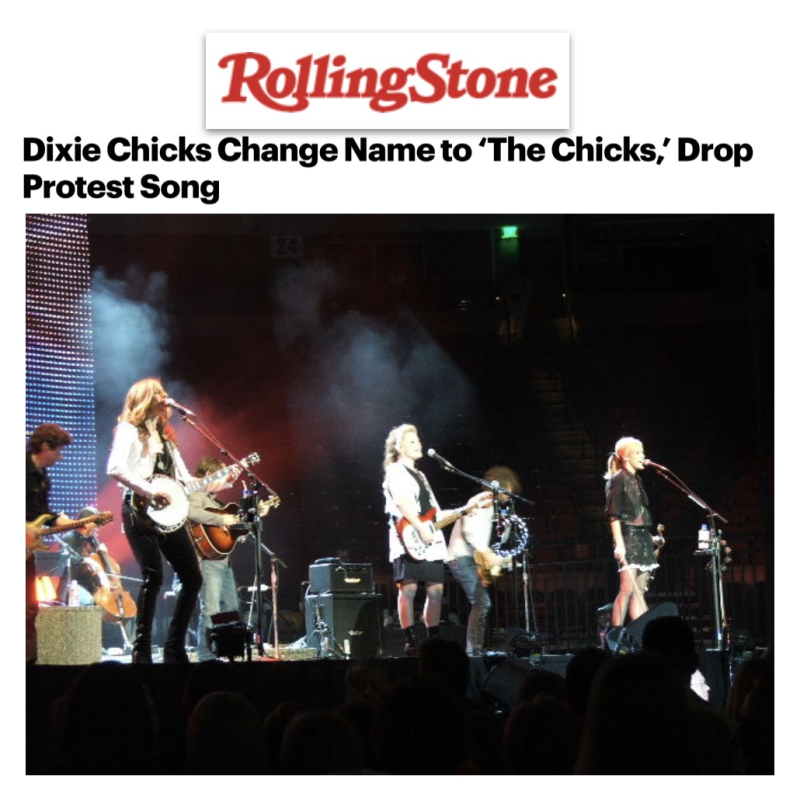 The Dixie Chicks have officially dropped the “Dixie” from their name. The iconic country-pop trio of Natalie Maines, Emily Strayer, and Martie Maguire are now simply called “The Chicks,” changing their website URL and their Instagram handle to the new name on Thursday.

On their website, the trio only offered this statement: “We want to meet this moment.” In a press statement, they added, “A sincere and heartfelt thank you goes out to ‘The Chicks’ of [New Zealand] for their gracious gesture in allowing us to share their name. We are honored to co-exist together in the world with these exceptionally talented sisters. Chicks Rock!”

The move comes in light of the country’s ongoing protests and conversationsregarding the history of racism in the U.S., and follows on the heels of Lady Antebellumpulling a similar move by changing their band name to Lady A.

Along with the name change, the Chicks released a brand new single on Thursday, titled “March March,” which will be appearing on their upcoming fifth studio album, Gaslighter. The protest song, produced by Jack Antonoff, combines a minimalist electronic beat with subdued instrumentation from Maguire’s fiddle and Strayer’s banjo.

Lyrically, Maines addresses everything from Greta Thunberg and youth climate protests to gun violence and underpaid school teachers, over a music video that edits together footage from recent Black Lives Matter protests and police confrontations. Toward the end, as Maguire dives into a fiery fiddle solo, the names of black Americans killed by police flash onscreen, and the video concludes with a message from the Chicks — “Use your voice. Use your vote.” — along with links to various social justice organizations and nonprofits.

President Trump stands up for LAW and ORDER.