Why doesn't their ABC talk about their own video of Andrews thanking the PM for offer of ADF?

This photo's from the front page of The Australian today.

The Hotel Quarantine Inquiry accepted Daniel Andrews' evidence that he didn't know the ADF had been offered to him in support of hotel quarantine.

So to keep the man who set the inquiry up (Premier Andrews) in the clear, the inquiry will blame his COS for failing to pass on the offer of ADF troops. Doesn't gel well with what Andrews said at the time.

Mmmm! Why is no one talking about this? pic.twitter.com/ol8p6iLCTI

Around the time that Unified's guards were alleged to have been on the grog while guarding quarantine hotels, and the viral seeds of 768 deaths were escaping into the community, Victoria's Executive Director of Employment Inclusion Katrina Curry was singing Unified Security's praises to the highest office in the state - the Trades Hall Council.

So when the 'Union peak' group decided it wanted to learn more about Unified Security and their work, it dispatched the taxpayer funded Ms Curry to help out. 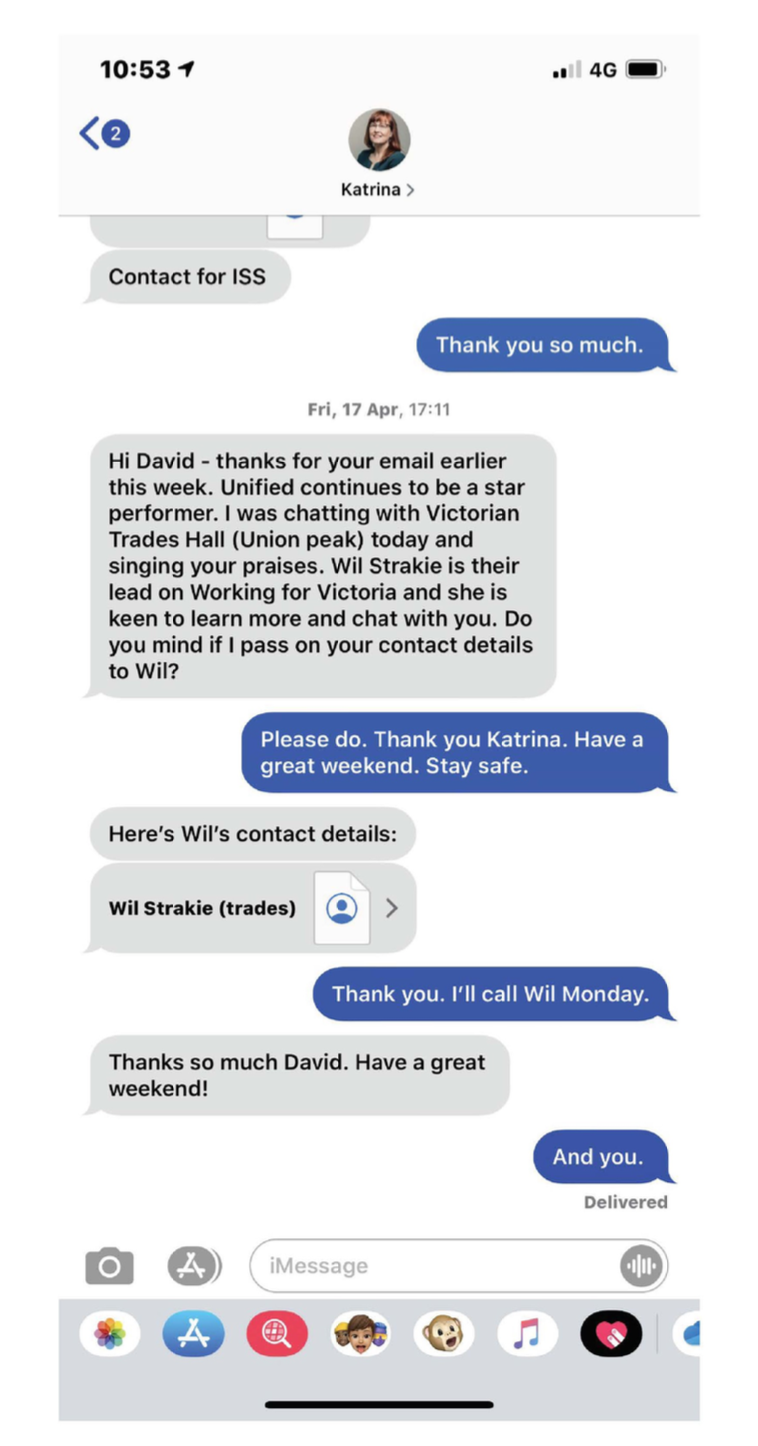 It applies to the government, officers, self-employed and organisations.

There are huge penalties including fines of $16.5m for employers and jail terms of up to 20 years and fines of up to $1.65m for officers whose actions or omissions:

The criminal negligence standard applies, ie where there is a "great falling short of the care that would have been taken by a reasonable person in the circumstances in which the conduct was engaged in, and involves a high risk of death or serious injury or serious illness".

Under the new laws, senior officers could be liable (in addition to the employer) where they are negligent by failing to take reasonable steps on workplace safety to prevent fatalities, including managing mental injury that leads to suicide. 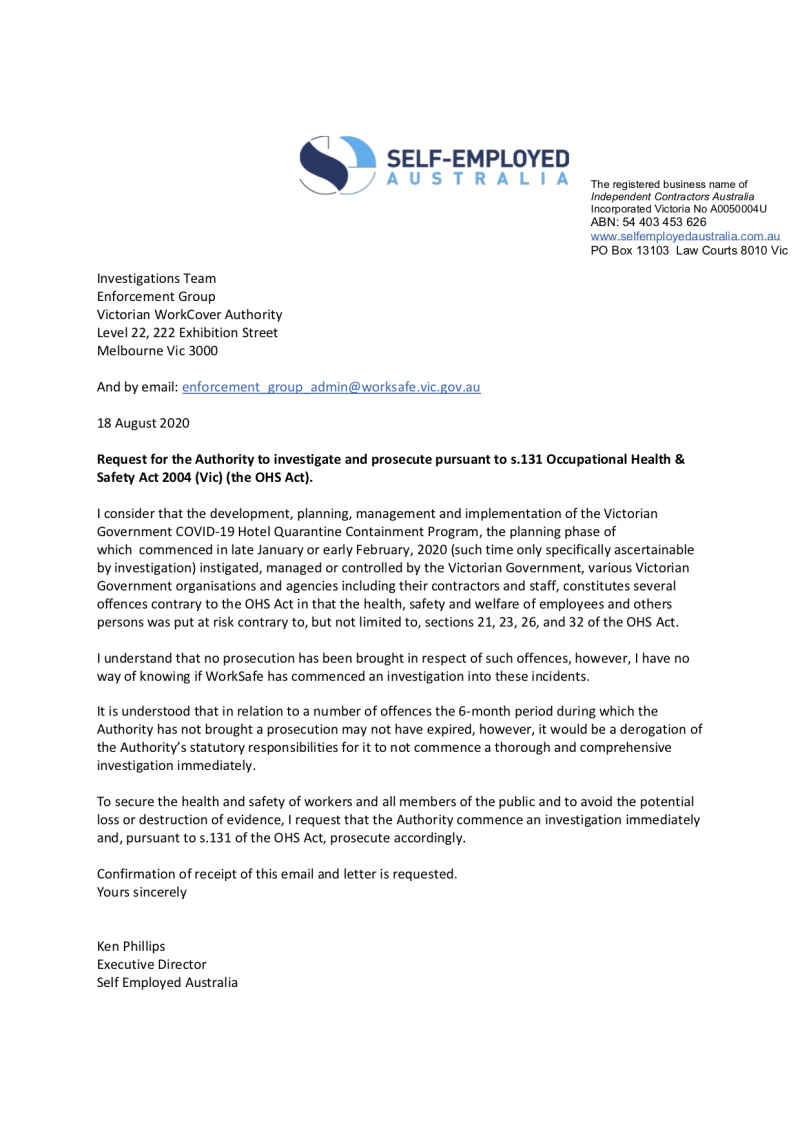 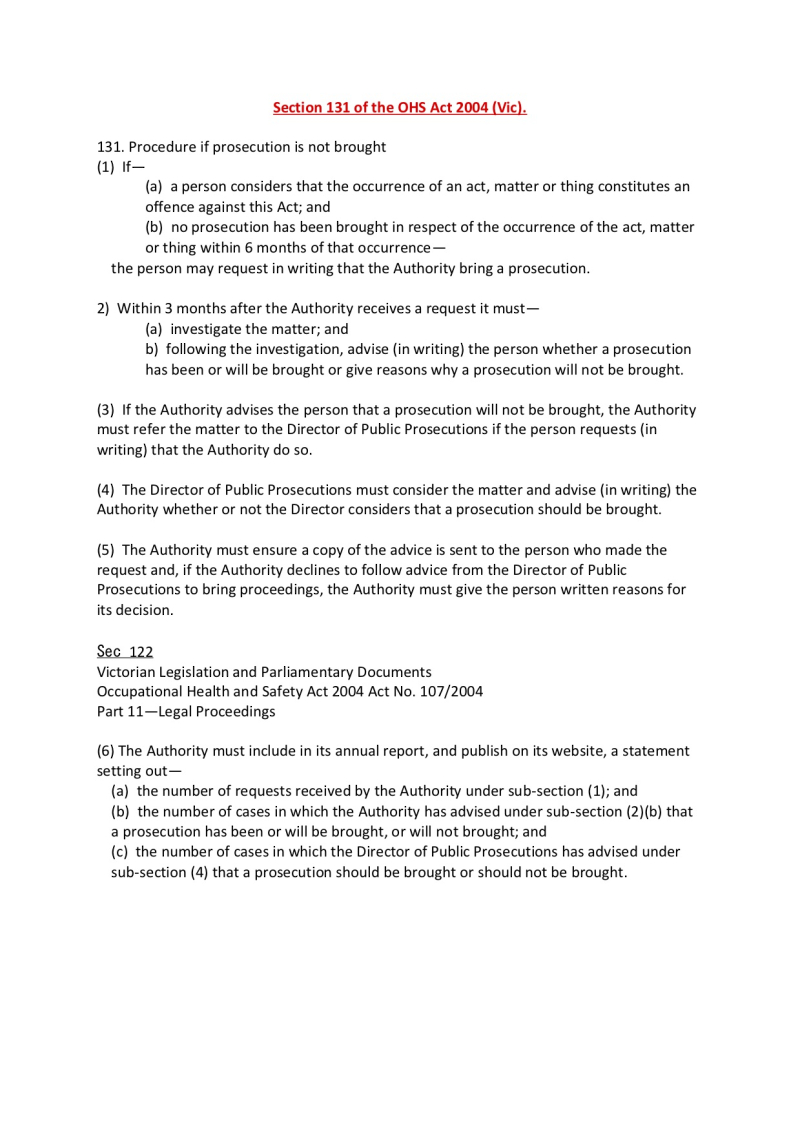 This from the organisation behind this prosecution request, Self-Employed Australia.

Yesterday we wrote to the Victorian WorkCover Authority requesting them to investigate the Covid-19 hotel quarantine mess for possible breaches under the Victorian work safety laws (Occupational Health & Safety Act). Section 131 of the Act allows us to lodge such a request on the Authority who, under the Act must investigate and respond.

The Victorian government has pretty much admitted that the second Covid-19 wave outbreak happened because of the botched hotel quarantine mess in March. Hundreds of deaths have occurred following this.

If anything like this sort of scenario had happened in a private-sector business, we could be sure that a massive investigation would be undertaken by the Victorian WorkCover Authority. The investigation would look to see if prosecution should occur under the Victorian OHS Act, including application of the new manslaughter provisions. But the WorkCover Authority has done nothing over the Covid-19 disaster.

The Victorian government has established an Inquiry into the failures. However, all the Inquiry can do is write a report. The inquiry does not have the investigative and prosecutorial powers available to it that the WorkCover Authority has on OHS matters.

The core facts, well recorded in the media, are that:
Everything points to the probability of recklessness in the chain of command and control of decision-making related to the quarantines.

This Covid-19 outbreak is arguably the largest mass deaths event resulting from a workplace incident in Australia’s history. The Victorian WorkCover Authority has a statutory duty to investigate with a view to proceeding to prosecution if warranted. From all available information the Authority has done nothing.


You can help. We anticipate that we will need to seek court orders.
You can contribute to our legal fighting fund for this action here.

Hotel Inquiry - failure of the hotel quarantine program is responsible for 768 deaths. “The failure by the hotel quarantine program to contain this virus is today responsible for the deaths of 768 people and the infection of some 18,490,” he said.

“One only needs to pause and to reflect on those figures to appreciate the full scope of devastation and despair.”

People involved in the management (or mismanagement) of the program may well find themselves answering criminal charges under Victoria's industrial manslaughter laws.

Crown Casino sent Vic Gov serious complaints against Unified Security - who do you think was appointed to investigate?

Here's the note from Crown's regulatory and compliance manager to the Victorian Government's Hotel Quarantine Agency Commander, Rachaele May. 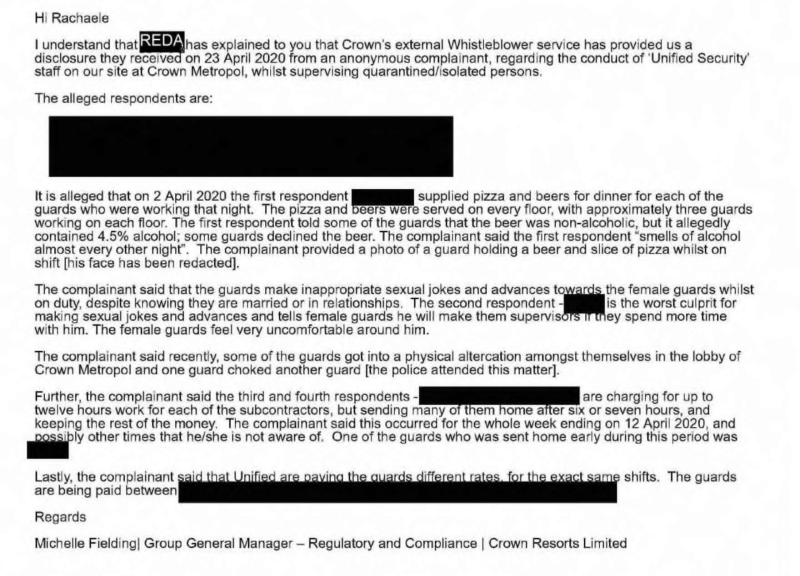 So what do you think happened next?

Did the Victorian Government investigate the alleged fraud, or take the matter to police?

Did it engage an external auditor?

Did it interview witnesses and Unified management to test the allegations?

If you answered none of the above, you'd be correct.

Unbelievably, the Victorian Government's Principal Policy Officer, Inclusion Employment, sent the complaint against Unified Security TO UNIFIED SECURITY, and asked it to investigate itself! 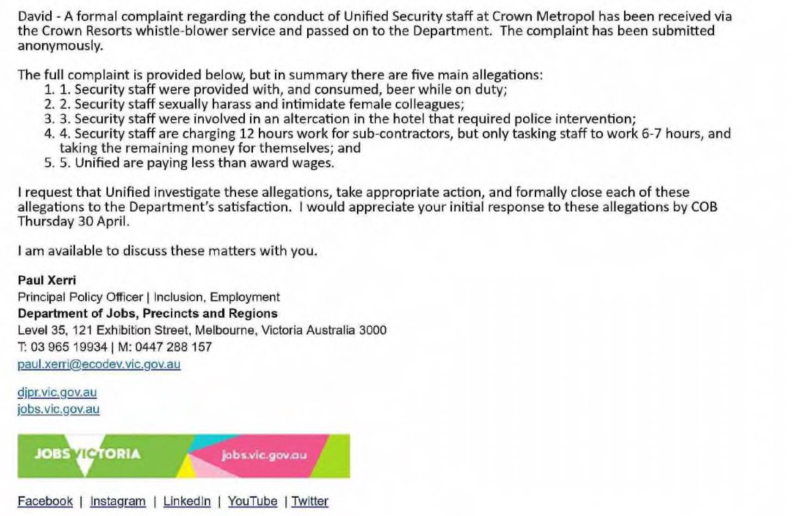 "Please investigate yourself, take appropriate action and let us know how you go".

He even included Crown's original report to the government.

Unified responded by sacking some staff - and the Victorian Government accepted that as the end of the matter.

Several further complaints were laid against Unified and its staff.  In each instance, the Victorian Government officers sent all the details to Unified and asked it to investigate itself.

Incompetence is the kindest way to view this shameful episode, which frankly borders on corruption.

Waleed Aly hosting a documentary on President Trump! That’s sure to be fair and balanced. 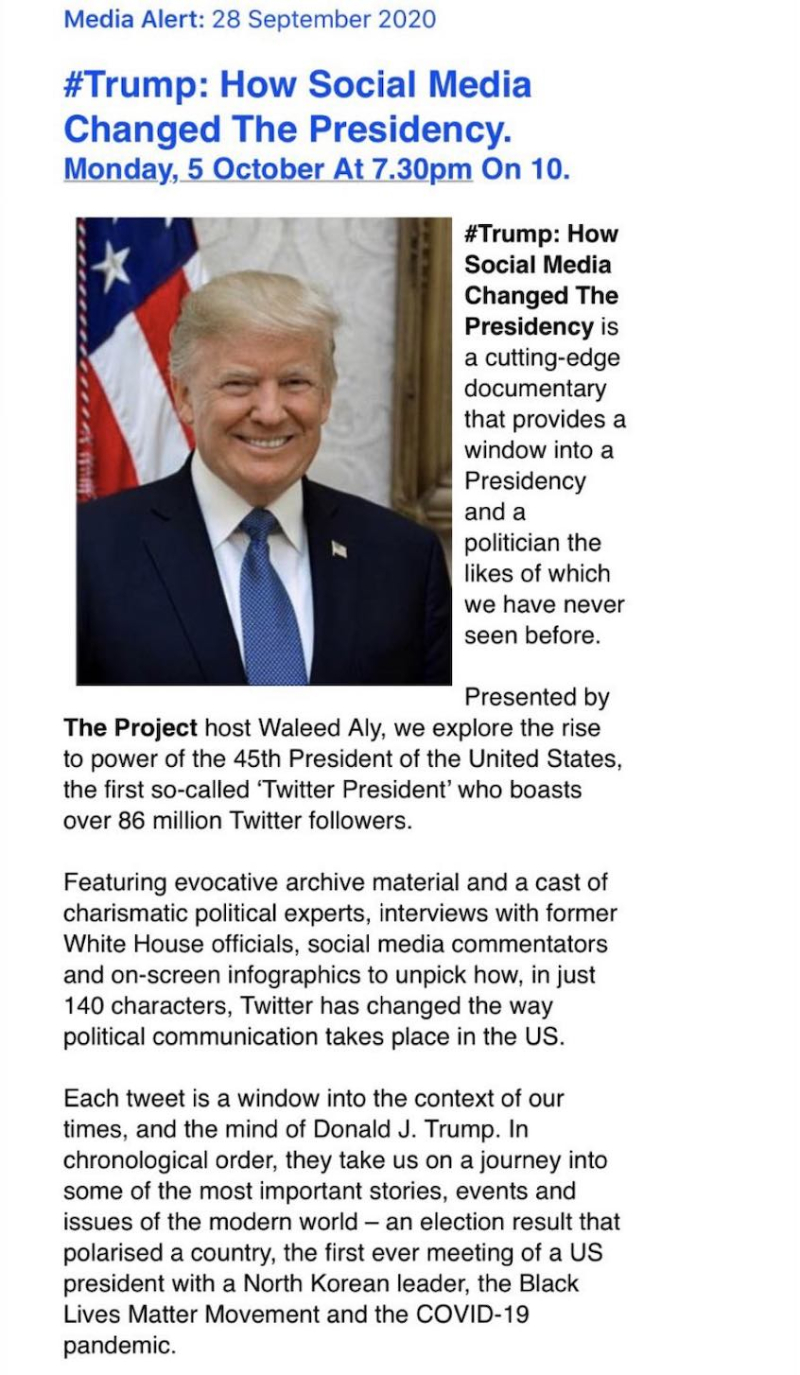 Very strange announcement to make to the world.

So, 24 minutes before the National Cabinet meeting finished at 1:00PM on Friday 27 March 2020, David Millward was advising his staff at 12:36PM to go on to a Health Department Web page to undertake a 10 minute course in infection control.

I recall Premier's Department Secretary, Chris Eccles gave evidence that he stepped out of the National Cabinet to give Jobs Department Secretary a heads up on the move to Hotel Quarantine and asked him about his ability to source hotel rooms and to check with someone else on logistics.

Jobs Secretary, Simon Phemister said in his evidence he also phoned Kym Peake, Secretary of the Health Department to give her a heads up as he formed the view that her Department would be engaged in the health responsibilities of Hotel Quarantine.

So did someone, in the Jobs Department or someone in thee Health Department, give a "Heads up" to David Millward of Unified Security, before or during the meeting of the National Cabinet when it decided on Hotel Quarantine?

What about National Cabinet secrecy?

The Hotel Quarantine Inquiry is meeting again at 10:00AM tomorrow for hearings.

Perhaps they should be alerted to this and add this to their stated plans to examine in detail the contracts of private security and the payments to them. 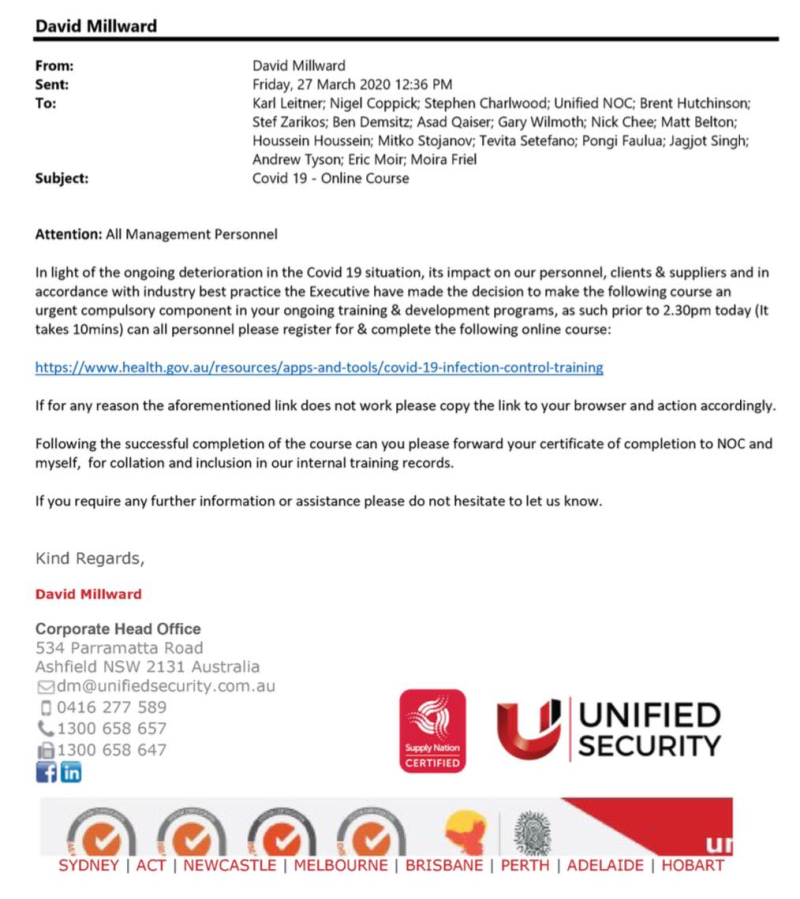 Thanks to Jeff of FNQ