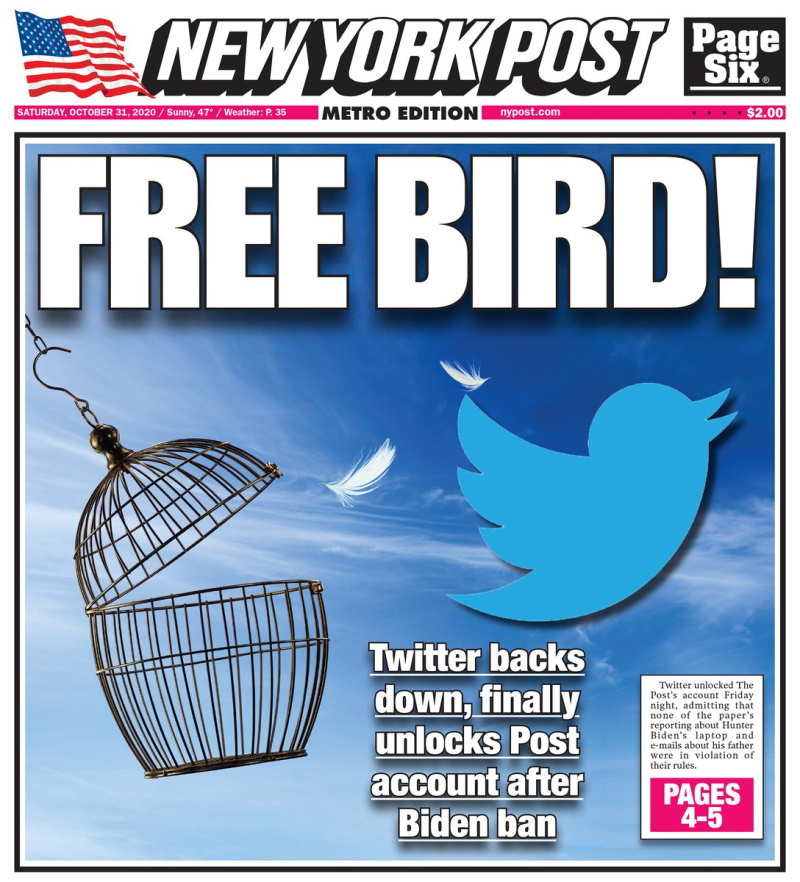 The move came after The Post refused Twitter’s demand that it delete six tweets that linked to stories that the company claimed — without any evidence — were based on hacked information.

In a series of tweets, the social-media giant said it was revising its “Hacked Materials Policy” and “updating our practice of not retroactively overturning prior enforcement.”

“Our policies are living documents,” said one of the tweets from @TwitterSafety.

“We’re willing to update and adjust them when we encounter new scenarios or receive important feedback from the public.”

Twitter running a blackmail operation — cooperate or no traffic for you

The Post immediately celebrated the victory with a tweet declaring “We’re baaaaaaack” and an image of the tabloid’s Saturday front page, with the headline “FREE BIRD!”

The message quickly went viral, racking up more than 17,000 retweets and close to 50,000 likes in about an hour.

The company claimed The Post violated a policy on sharing “hacked materials” by tweeting links to bombshell exclusives on Biden’s emails — without ever saying how it came to that conclusion and despite the fact that neither Hunter Biden or anyone else has claimed his emails were hacked.

But it continued to hold The Post’s account hostage — demanding the six tweets about its own reporting be deleted. They never were.

Twitter also made the six tweets at issue invisible to users by replacing them with messages saying, “This Tweet is no longer available.”

On Friday, the company said that under its latest policy revision, “Decisions made under policies that are subsequently changed & published can now be appealed if the account at issue is a driver of that change.”

“We believe this is fair and appropriate,” Twitter said.

News Corp called the move, “an important moment for journalism and for the freedom of the press.”

“There is no evidence whatsoever that the documents are not authentic, and the arbitrary blocking of the Post was a significant moment during a critical time in this election season. It also had a negative commercial impact, but the Post team was determined that principle should prevail and it has.

“Alexander Hamilton, the paper’s founder, looks down tonight with a broad smile and a sense of pride,” said Chief Communications Officer Jim Kennedy.

The Post gained about 190,000 followers while it was locked out of its account, a 10.6 percent increase in just about two weeks.

That compared to a drop of just 1.2 percent for the S&P 500 Index, which Twitter joined in 2018 when it replaced Monsanto, which was acquired by Bayer.

The company’s abrupt about-face regarding The Post and its grueling treatment by Wall Street traders followed Twitter CEO Jack Dorsey’s problematic appearance before the Senate Commerce, Science and Transportation Committee on Wednesday.

But a spokeswoman for President Trump’s campaign quickly posted a video that showed she was prevented from tweeting an Oct. 15 Post report about a 2017 business plan involving Hunter Biden in which 10 percent of a new company would be “held by H for the big guy?”

The ban on that story was lifted about two hours after Dorsey’s remark, with Twitter claiming it was the result of a technical glitch. 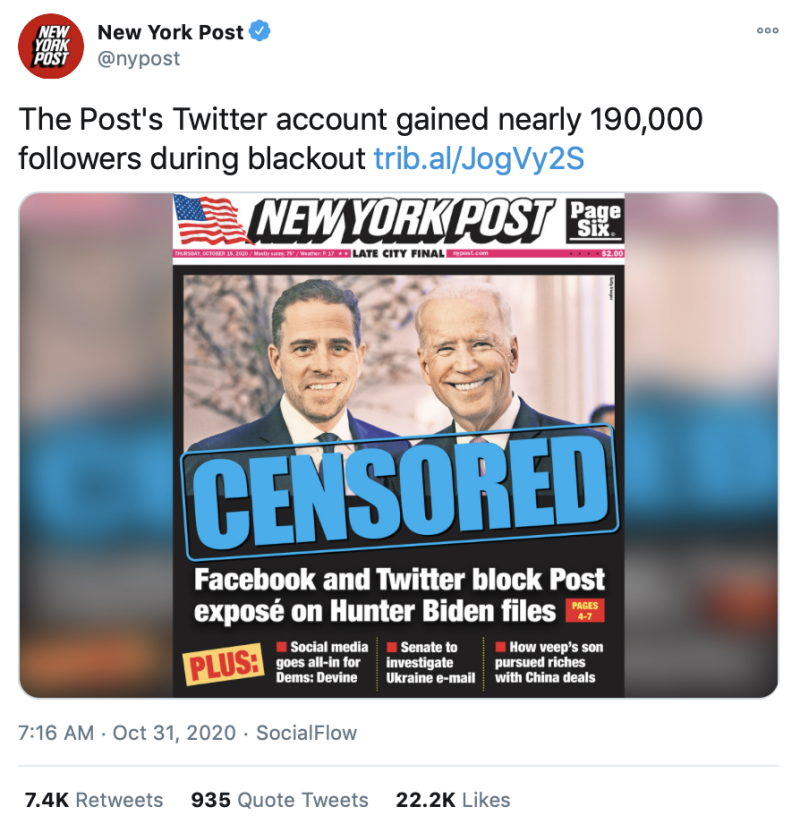 Reject the media blob...remember the promise of the internet @Snowden pic.twitter.com/IhbEGeF2Vg

My Resignation From The Intercept

The same trends of repression, censorship and ideological homogeneity plaguing the national press generally have engulfed the media outlet I co-founded, culminating in censorship of my own articles. 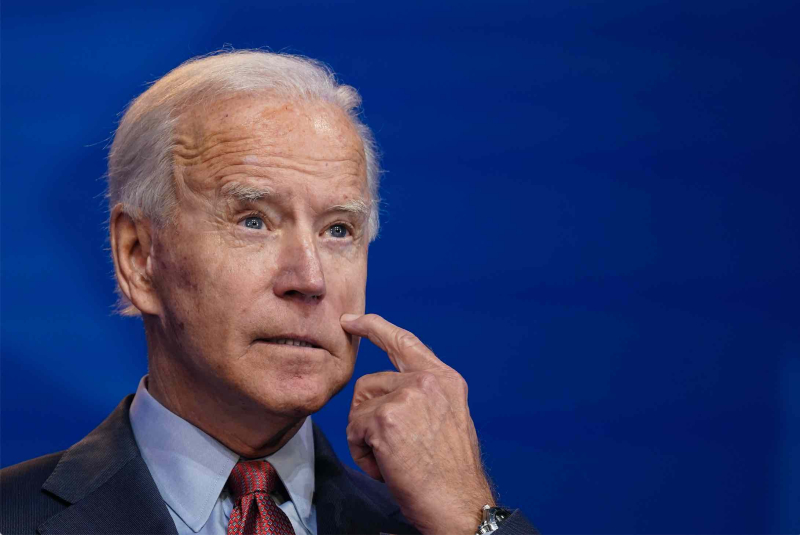 Today I sent my intention to resign from The Intercept, the news outlet I co-founded in 2013 with Jeremy Scahill and Laura Poitras, as well as from its parent company First Look Media.

The final, precipitating cause is that The Intercept’s editors, in violation of my contractual right of editorial freedom, censored an article I wrote this week, refusing to publish it unless I remove all sections critical of Democratic presidential candidate Joe Biden, the candidate vehemently supported by all New-York-based Intercept editors involved in this effort at suppression.

The censored article, based on recently revealed emails and witness testimony, raised critical questions about Biden’s conduct. Not content to simply prevent publication of this article at the media outlet I co-founded, these Intercept editors also demanded that I refrain from exercising a separate contractual right to publish this article with any other publication.

I had no objection to their disagreement with my views of what this Biden evidence shows: as a last-ditch attempt to avoid being censored, I encouraged them to air their disagreements with me by writing their own articles that critique my perspectives and letting readers decide who is right, the way any confident and healthy media outlet would. But modern media outlets do not air dissent; they quash it. So censorship of my article, rather than engagement with it, was the path these Biden-supporting editors chose.

The censored article will be published on this page shortly (it is now published here). My letter of intent to resign, which I sent this morning to First Look Media’s President Michael Bloom, is published below.

As of now, I will be publishing my journalism here on Substack, where numerous other journalists, including my good friend, the great intrepid reporter Matt Taibbi, have come in order to practice journalism free of the increasingly repressive climate that is engulfing national mainstream media outlets across the country.

This was not an easy choice: I am voluntarily sacrificing the support of a large institution and guaranteed salary in exchange for nothing other than a belief that there are enough people who believe in the virtues of independent journalism and the need for free discourse who will be willing to support my work by subscribing.

Like anyone with young children, a family and numerous obligations, I do this with some trepidation, but also with the conviction that there is no other choice. I could not sleep at night knowing that I allowed any institution to censor what I want to say and believe — least of all a media outlet I co-founded with the explicit goal of ensuring this never happens to other journalists, let alone to me, let alone because I have written an article critical of a powerful Democratic politician vehemently supported by the editors in the imminent national election.

But the pathologies, illiberalism, and repressive mentality that led to the bizarre spectacle of my being censored by my own media outlet are ones that are by no means unique to The Intercept. These are the viruses that have contaminated virtually every mainstream center-left political organization, academic institution, and newsroom. I began writing about politics fifteen years ago with the goal of combatting media propaganda and repression, and — regardless of the risks involved — simply cannot accept any situation, no matter how secure or lucrative, that forces me to submit my journalism and right of free expression to its suffocating constraints and dogmatic dictates.

From today, new applicants for most visas will be required to sign or accept an updated Australian Values Statement, with a greater focus on values like freedom, respect, equality and the rule of law.​

​The declaration that Australian citizenship applicants sign as part of their application has also been updated to mirror the wording of the Australian Values Statement.

Our shared values unite us as Australians and underpin the freedom and prosperity that makes our nation so attractive for the millions of migrants who choose to visit, work and settle here.

The updated statement better reflects the importance we place on these values and is the first substantial change to the Australian Values Statement since it was introduced in 2007.

There will now be one statement for both temporary and permanent visa applicants that confirms they understand and will conduct themselves in line with our values and our laws.

Those who want to settle in Australia permanently will also commit to make reasonable efforts to learn English, so they can fully participate in the community and have the best possible chance to get a job. There is no new test or threshold associated with this change.

The changes are part of the Morrison Government’s $62.8 million investment in protecting our social cohesion, which builds on the $71 million social cohesion package announced in March 2019.

As previously announced, a new Australian Citizenship Test​ with a stronger focus on Australian values will also come into effect on 15 November.

The Life in Australia booklet provides visa applicants with supporting information on the values ​in the updated Australian Values Statement.

Next steps in escalating the Senator Cash quote "As a former PM, Gillard won't be charged"

It's now 5 weeks since we first asked Senator Michaelia Cash to explain this statement:

"Julia Gillard is a former prime minister and because of that she won't be charged". 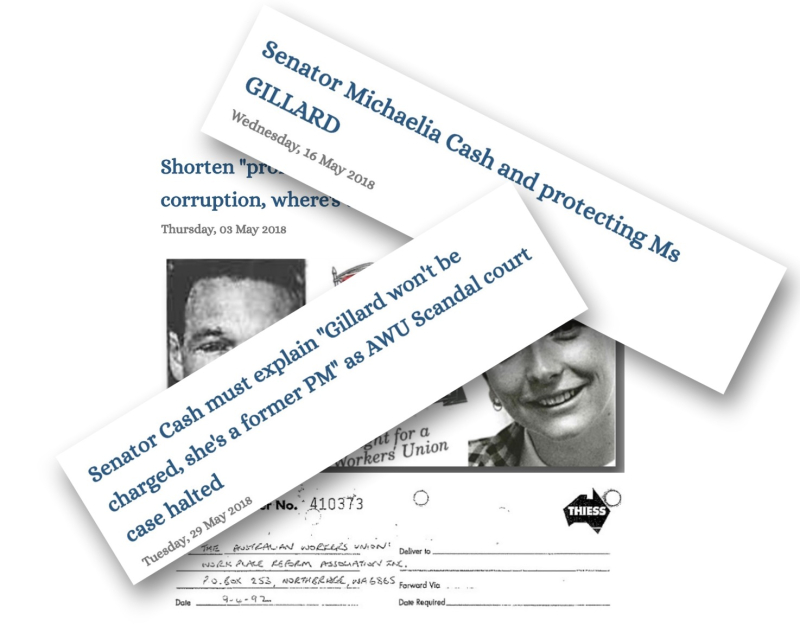 On 2 May we ran a story on corruption involving the parent company of Thiess Contractors which paid over $400,000 into the Gillard/Wilson 1990s slush fund.  At the time Ralph Blewitt was the only person facing charges over the crimes and we brought you the news:

On 25 May 2018 Ralph Blewitt will make his first appearance in the Perth District Court........  (In his trial he will) call Bruce WILSON, Julia GILLARD, Bernard MURPHY, Nick JUKES, Joe TRIO and others to the witness box -  along with documents created or authorised by them.

In that context it was worrying to hear that Minister for Jobs Senator Cash was reported to have said that Gillard wouldn't face charges because she's a former PM.

I wrote at the time:

If that is so it makes for a marked departure from our traditions of equal justice before the law.

I will today ask Minister Cash to confirm whether or not that's the government's position.

Many of our readers wrote to the Senator and asked her to confirm the quote.

By this stage dozens of readers were writing to Senator Cash.

It's now 5 weeks down the track and Senator Cash hasn't answered a single query from our readers.

Shame on these Bhopal Indian Muslims celebrating the beheadings in France

Vive la France, she has real problems. Millions of them.

👇 France today ... you won't see this video on MSM 👇 pic.twitter.com/HHC96dpejo

Incredible. Google Executive on hidden camera talking about "preventing the next Trump situation"

This smug little number saying her company, #Google, shouldn’t be broken up. Why? Because smaller companies won’t have the resources Google has “to prevent the next Trump situation.” #BreakUpGoogle pic.twitter.com/gP6enulA3D Qantas's Alan Joyce is spot on 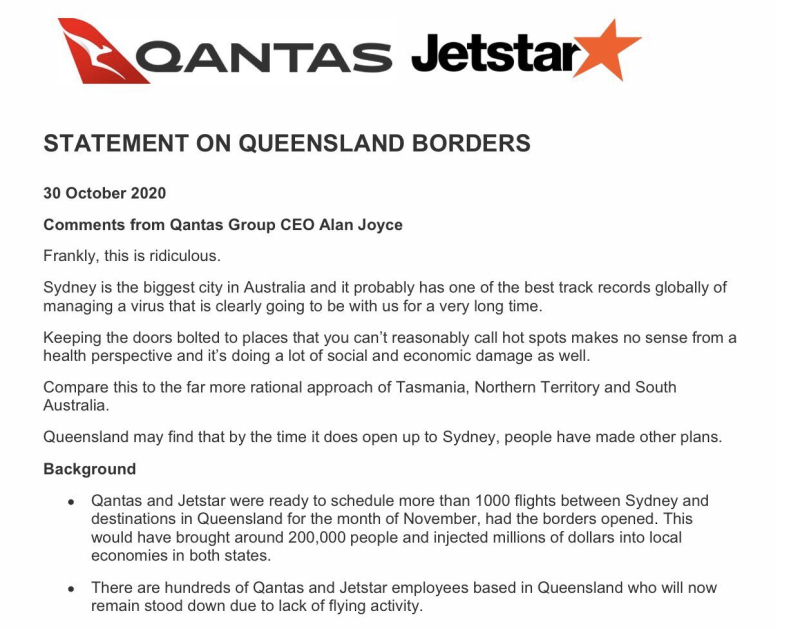 I love this Trump ad!

Reminds me of this!