What is it about self proclaimed celebrities campaigning to shut Sydney down?

18 new infections and ZERO people in intensive care but Twitter celebrity media types are now pushing for Sydney shutdown. What is it about leftists in the media and authoritarianism?Once the media used to stand up to power - but these dills are pushing to have power take control. We are in strange times. 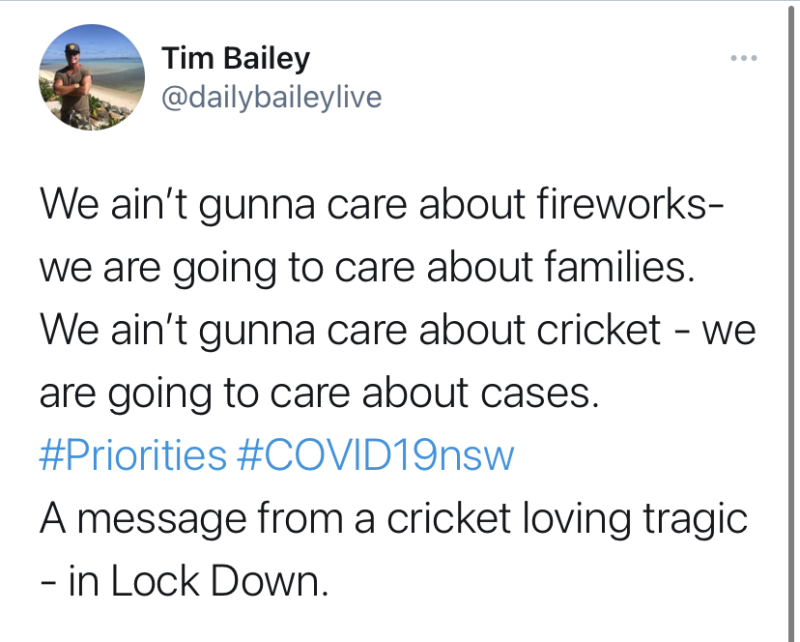 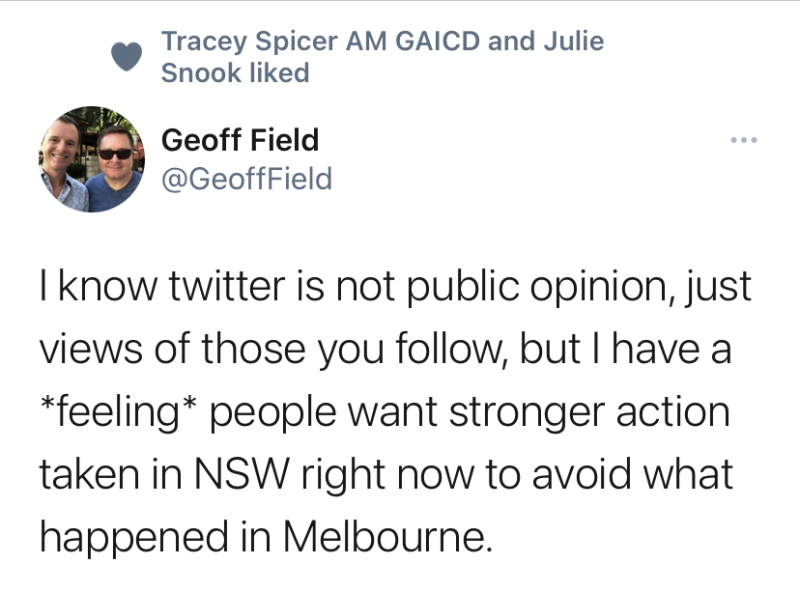 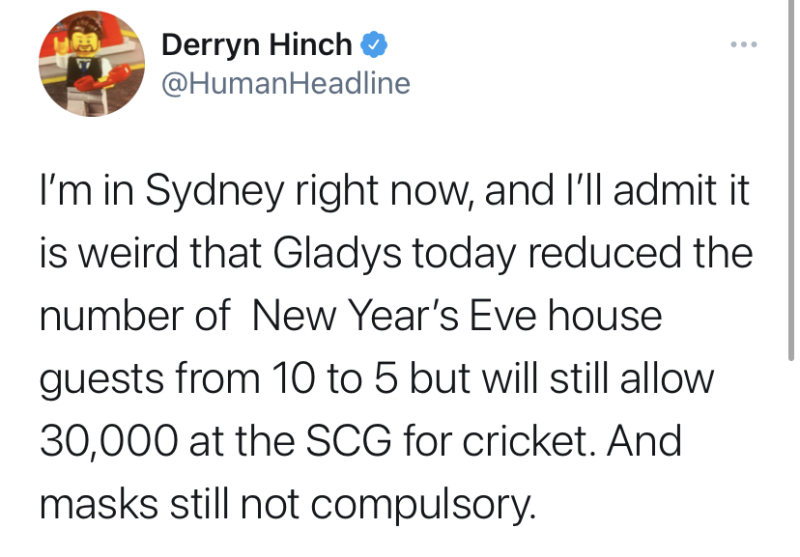 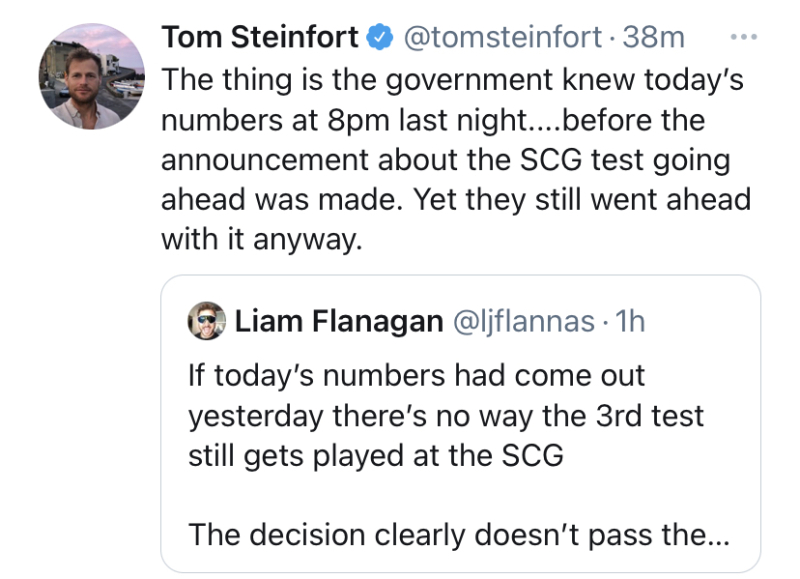 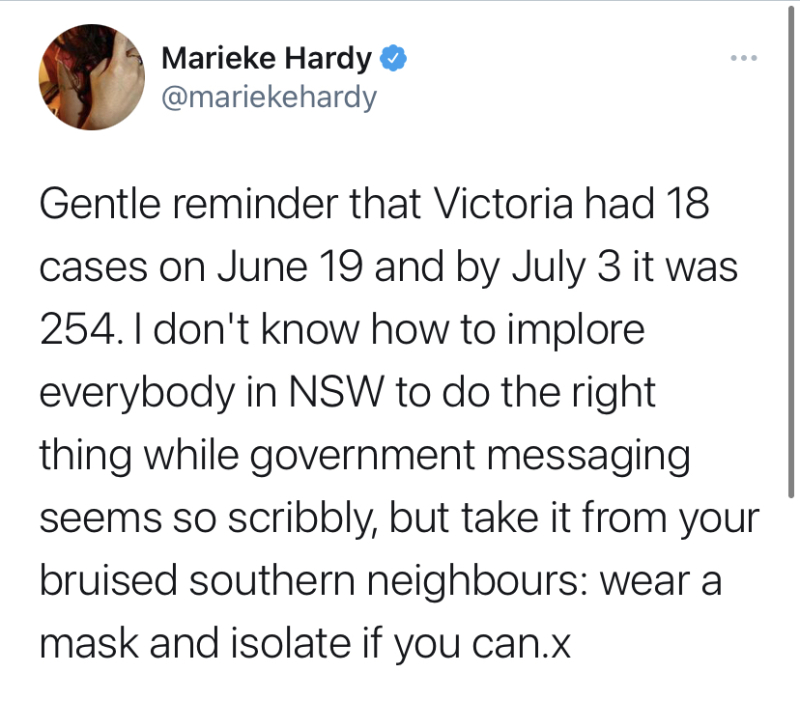 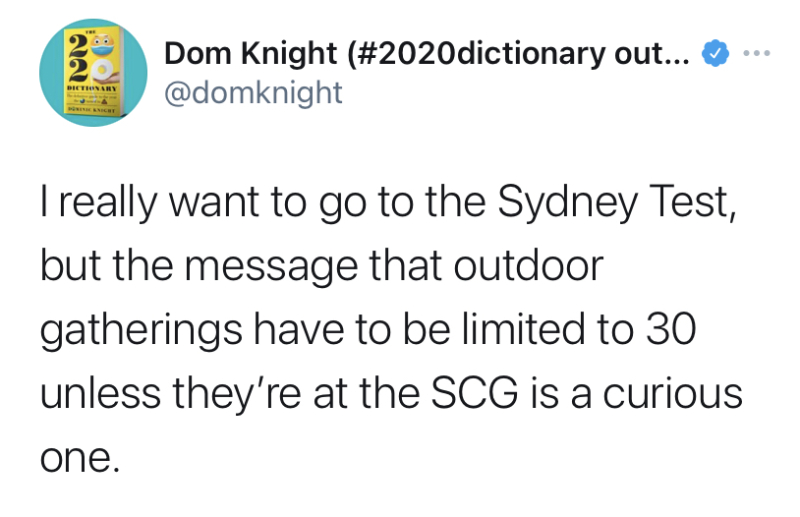 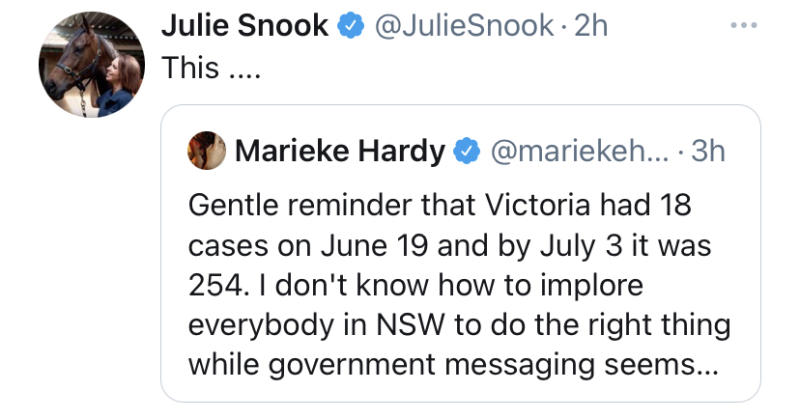 Thanks to reader Julie for the tip. 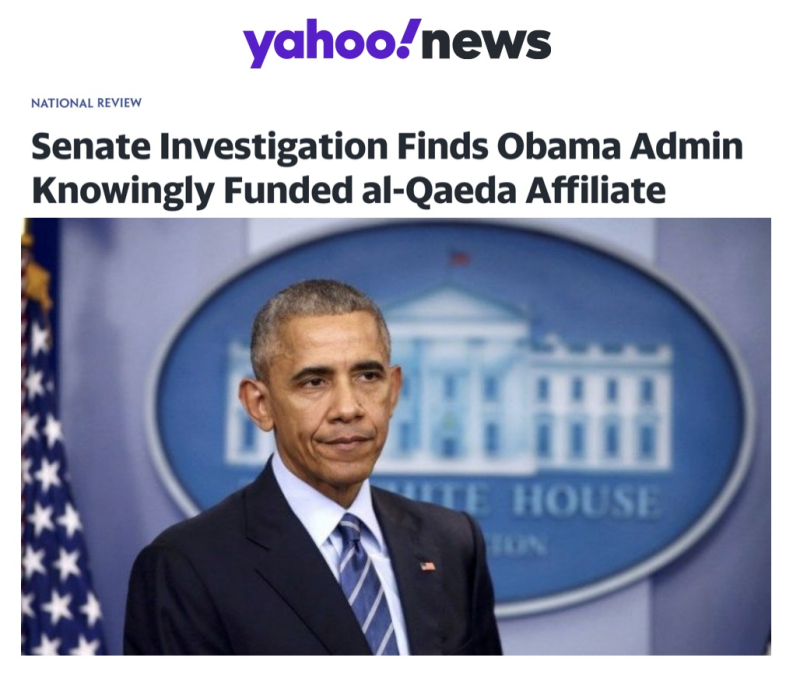 Non-profit humanitarian agency World Vision United States improperly transacted with the Islamic Relief Agency (ISRA) in 2014 with approval from the Obama administration, sending government funds to an organization that had been sanctioned over its ties to terrorism, according to a new report.

Senate Finance Committee Chairman Chuck Grassley (R., Iowa) recently released a report detailing the findings of an investigation his staff began in February 2019 into the relationship between World Vision and ISRA.

The probe found that World Vision was not aware that ISRA had been sanctioned by the U.S. since 2004 after funneling roughly $5 million to Maktab al-Khidamat, the predecessor to Al-Qaeda controlled by Osama Bid Laden.

However, that ignorance was born from insufficient vetting practices, the report said.

“World Vision works to help people in need across the world, and that work is admirable,” Grassley said in a statement. “Though it may not have known that ISRA was on the sanctions list or that it was listed because of its affiliation with terrorism, it should have. Ignorance can’t suffice as an excuse. World Vision’s changes in vetting practices are a good first step, and I look forward to its continued progress.”

The investigation was sparked by a July 2018 National Review article in which Sam Westrop, the director of the Middle East Forum’s Islamist Watch, detailed MEF’s findings that the Obama administration had approved a “$200,000 grant of taxpayer money to ISRA.”

Government officials specifically authorized the release of “at least $115,000” of this grant even after learning that it was a designated terror organization, Westrop wrote.

According to the Senate report, World Vision submitted a grant application to the United States Agency for International Development (USAID) to carry out its Blue Nile Recovery Program on January 21, 2014. 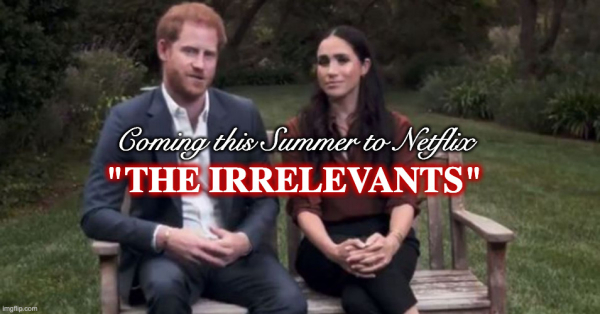 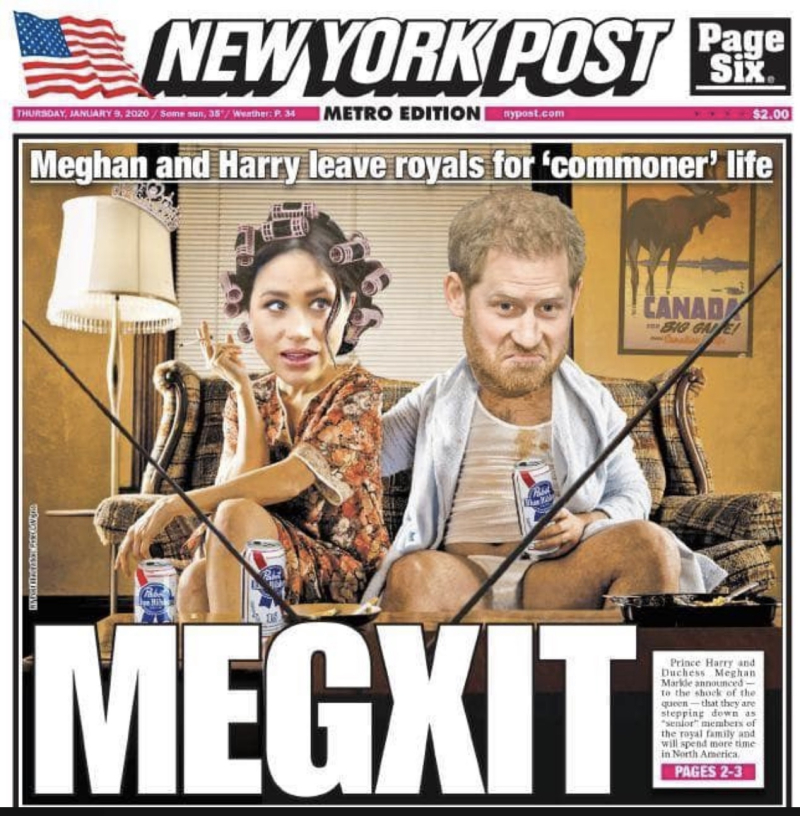 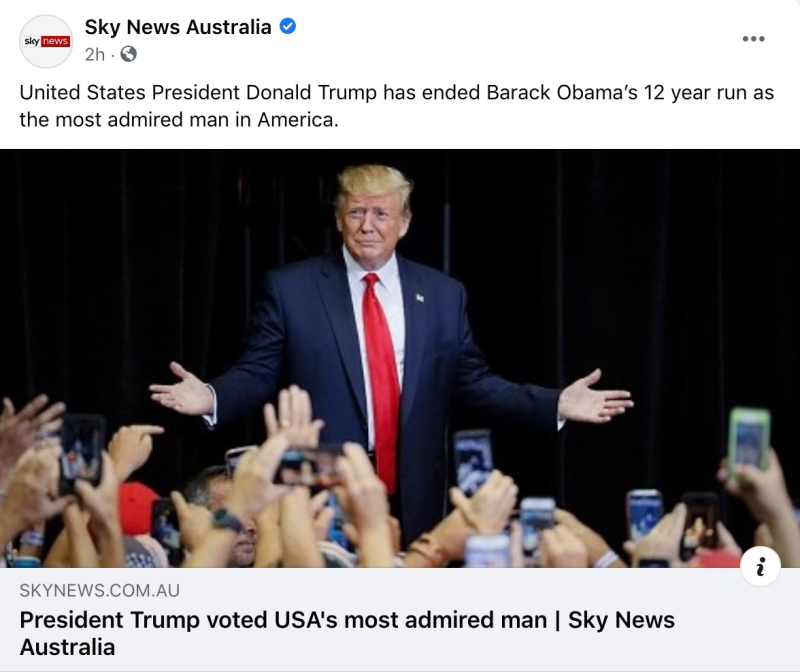 WASHINGTON, D.C. -- Americans are most likely to name President Donald Trump and Michelle Obama as most admired man and woman in 2020. Trump tied former President Barack Obama for the honor last year but edged out his predecessor this year. Trump's first-place finish ends a 12-year run as most admired man for Obama, tied with Dwight Eisenhower for the most ever.

Meanwhile, Michelle Obama ranks as most admired woman for the third year in a row. Vice President-elect Kamala Harris is second.

When the sitting president is not the top choice, it is usually because he is unpopular politically. That was the case in 2017 and 2018 when Trump had 36% and 40% approval ratings, respectively, and finished second to Obama as most admired man.

Even though Trump is similarly unpopular now -- 39% approve of his performance -- his dominant performance among Republicans, contrasted with Democrats splitting their choices among multiple public figures, pushes him to the top of the 2020 most admired man list.

In addition to the public figures named by Americans, 11% name a relative or friend as the man they admire most. Twenty-one percent did not offer an opinion in response to the open-ended question.

The Rev. Billy Graham, who passed away in 2018, finished among the top 10 a record 61 times during his life. Former President Jimmy Carter is the living man with the most top 10 finishes -- 29 -- putting him behind Graham and Ronald Reagan for third all-time. Carter finishes just outside the top 10 this year but made the 2019 list.

Pope John Paul II and Gen. Douglas MacArthur frequently made the top 10. They, along with Henry Kissinger, are the only men who were not future, current or former presidents to finish first overall in any year. MacArthur was most admired man in 1946, 1947 and 1951; Kissinger topped the list from 1973 through 1975, and Pope John Paul II did so in 1980.

Just as men who were president have dominated the most admired man list, women who were first lady have commonly been named most admired woman. Gallup has asked the public to name the woman they admire most 71 times since 1948, with either a current (18) or a former (39) first lady winning a total of 57 times. That has been the case every year since 1997, with Hillary Clinton accounting for most of those -- but Michelle Obama (2018 through 2020) and Laura Bush (2001) also finished first during that time span.

This year, 10% of Americans name Obama as most admired woman, 6% name Harris, and 4% name current first lady Melania Trump. Trump has been in the top 10 each of the past four years but has never finished first, joining Bess Truman and Lady Bird Johnson as former or current first ladies not to have received the distinction.

Sixteen percent of Americans name a relative or friend as the woman they admire most, and 19% do not have an opinion.

Partisans tend to name public figures aligned with their own party when answering the most admired woman question. Trump leads among Republicans at 8%, followed by Barrett (4%) and Haley (4%). Democrats are about equally likely to name Obama (17%) and Harris (16%), and 5% name Ocasio-Cortez.

Obama leads among independents (11%), with Trump second at 4%.

Queen Elizabeth's top 10 finish this year is her 52nd, far more than any other woman. Margaret Thatcher is second on the list with 34 top 10 appearances, followed by Winfrey at 33 and Clinton with 29.

Clinton, Jacqueline Kennedy Onassis, Mamie Eisenhower, Barbara Bush, Nancy Reagan, Betty Ford and Pat Nixon are the current or former first ladies who have placed in the top 10 at least 15 times. Obama has finished among the leaders 13 times to date.

Past, present and future White House occupants, whether presidents or first ladies, have figured prominently when Gallup has asked Americans to name the man and woman they admire most. As such, Barack Obama, Donald Trump and Joe Biden are likely to remain strong contenders for the most admired man title in the coming years. Should Trump continue to dominate Republicans' consciousnesses -- currently, Republicans rarely name any other public person than him -- he will have a good chance of winning in future years, especially if Democrats continue to split their choices between Obama and Biden. Still, former presidents typically have not been top of mind for Americans -- only Obama and Eisenhower received 10% or more mentions in any year after they left office.

Harris' prominent role in the forthcoming Biden administration should raise her national profile in the coming year, and possibly position her to overtake Michelle Obama as most admired woman.

Jason Morrison
These women have been treated appallingly, especially considering the terrible ordeal they have already been through.

BIDEN: The former VP promises 100 million vaccines to be administered during the first hundred days of a potential Biden-Harris administration.

"I'm going to move heaven and earth to get us going in the right direction." https://t.co/VlT7z8drtO pic.twitter.com/SRlJmKipmU

Kamala with a plan!

Daniel Lewin
52m  ·
UKRAINE INVESTIGATORS ON EVIDENCE OF BIDEN FAMILY CORRUPTION
Documents including some bank records and witnesses involved.
If true, this means a massive use of political connections and influence to become a wealthy crime syndicate.

Here's the full original video - thanks to readers Henry and Harry.