The continuing mystery of the Hadley-Mini-Me Mark Levy burner account.

2GB Hadley mini-me Mark Levy has shown himself to be a simple kind of fellow - capable of doing anything Ray needs.

When he’s not on the air, sprouting his idiot grade analysis of politics and COVID, he likes to use Twitter.

Which brings us to the continuing mystery of the Mark Levy burner account.

The owner of the twitter account “Massive Sports Lover” is a forthright defender of Levy.
Sometimes, the account even announces the same thing as Levy does on his own account.
Of course, it’s just a coincidence.
Eg: 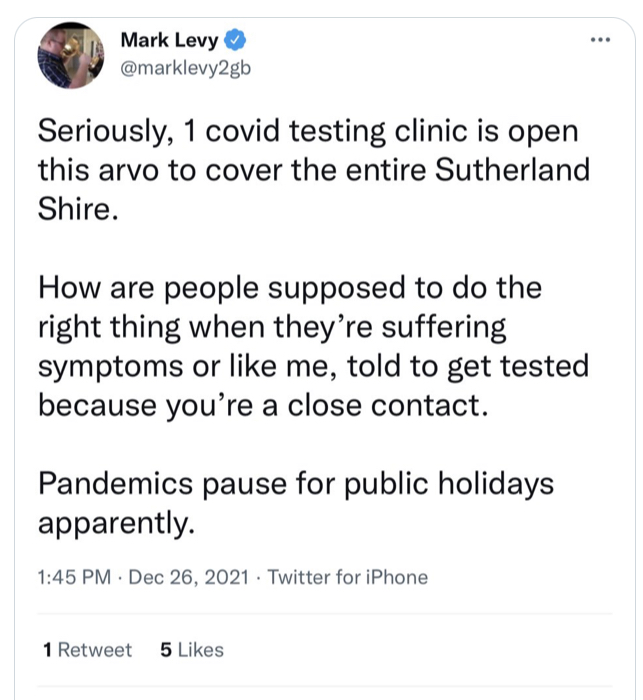 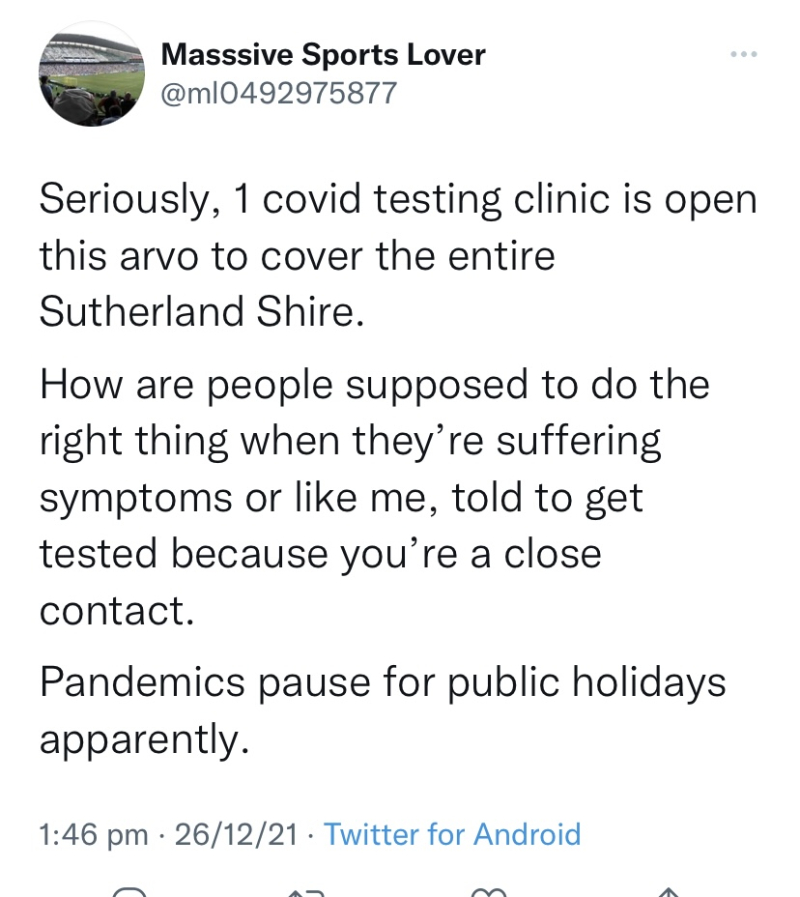 Then when someone dares to criticise Levy, the mysterious account leaps into action: 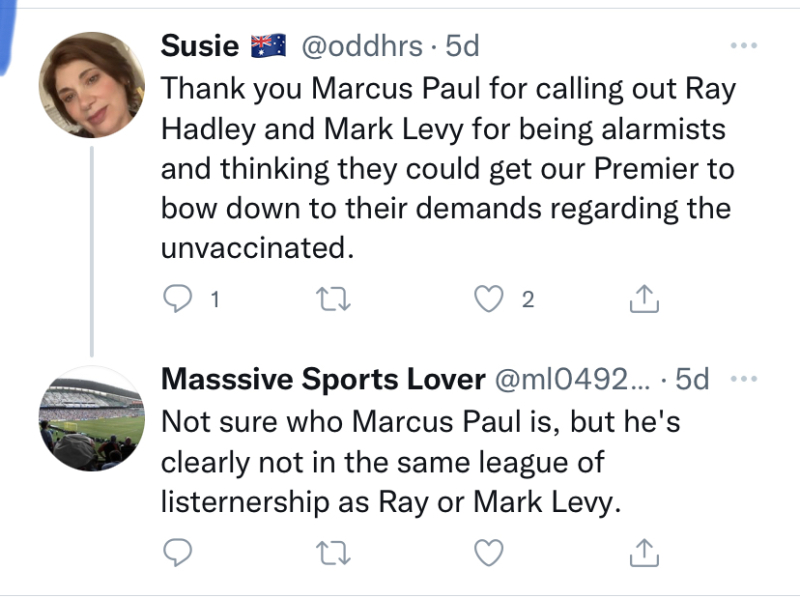 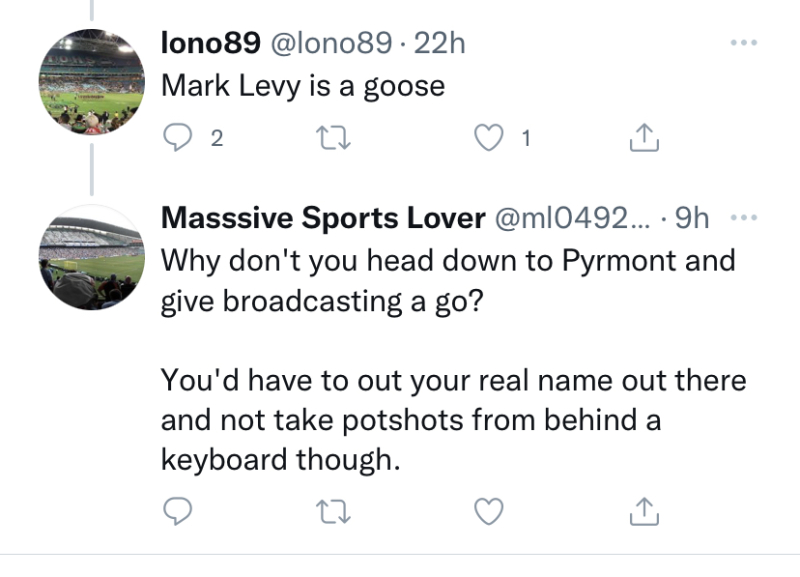 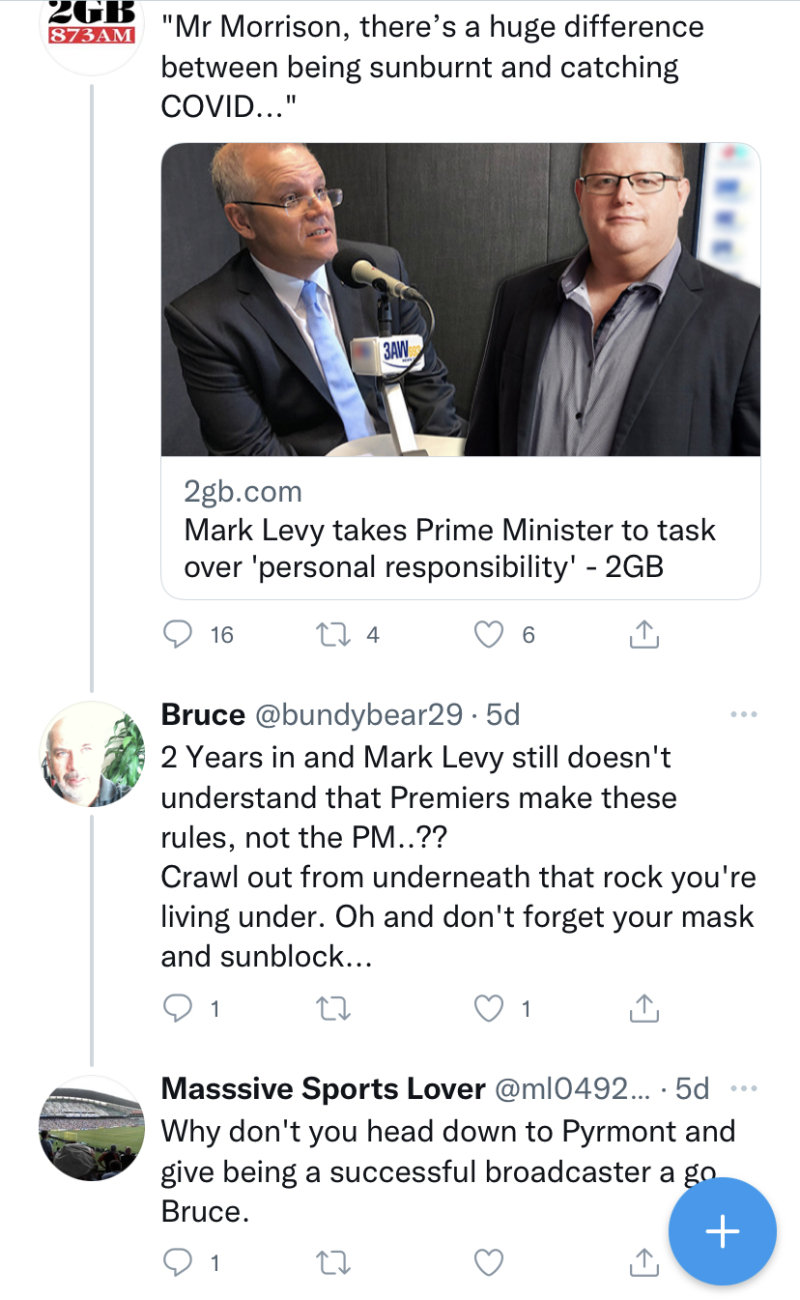 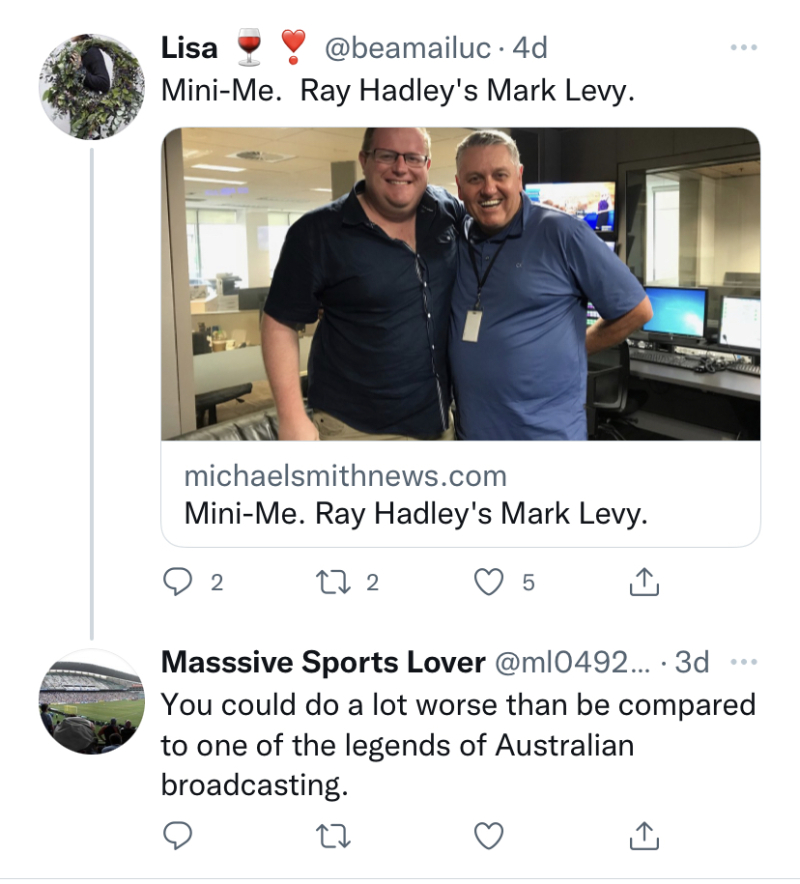 Of course, Levy has denied involvement.
He even lost his cool on the air about it.
https://www.4bc.com.au/mark-levy-puts-to-bed-rumours-hes-running-a-burner-account-on-social-media/
That said, the mystery lingers and the mystery account burns on. 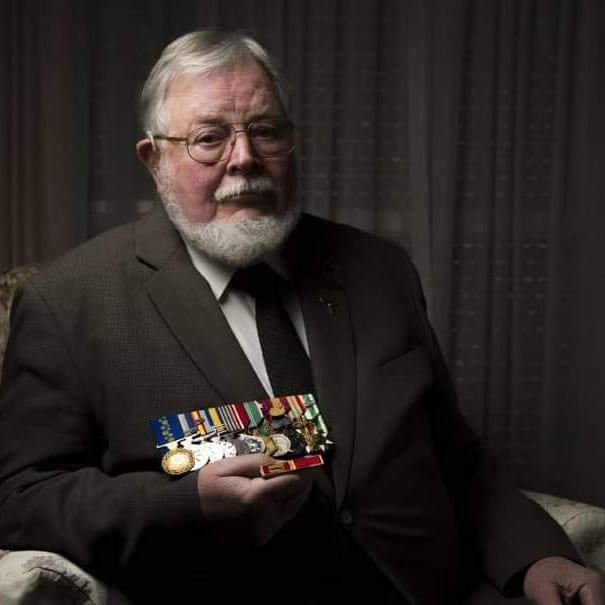 Thanks to Denise for the link to this terrific DVA article

Adrian Roberts was born at Midland Junction in Western Australia in early October 1939, the eldest child in a large family. When Adrian was young, his father was in Europe serving as an RAAF navigator and bomb aimer. He returned to his young son a 'total stranger' but over the years he had a strong influence on Adrian, instilling in him a strong ethos of service.

In 1959 Adrian joined the Citizen Military Forces, serving in the Light Horse. At the same he was studying at Teachers' College. Although he had begun working as a teacher, and having recently married, in 1962 Adrian was selected to attend Officer Cadet School at Portsea and chose to devote himself to Army life. He later remembered his time at Portsea as both 'the hardest year of my life' and the 'happiest of my memories'.

As a Second Lieutenant, Adrian continued his training in the Armoured Corps. By the mid-1960s he and his wife, Gillian, had two children. In 1965 he was posted to the newly raised 1 APC (Armoured Personnel Carrier) Squadron, beginning another period of intense training before being posted to Vietnam in April 1966.

Among historians of the Vietnam War, Adrian is perhaps best known for his courage and leadership during the Battle of Long Tan, for which he received a Mention in Dispatches, but his service during that conflict encompassed far more. He went on to finish his first tour with the 3rd Cavalry Regiment and in 1971 returned to Vietnam as a member of the highly respected and much decorated Australian Army Training Team Vietnam, serving with the 1 ARVN (Army of the Republic of Vietnam) Armoured Brigade in the northern part of South Vietnam before joining US Special Forces in training Cambodian troops.

Adrian returned to Australia, and Portsea in April 1972, this time to work as an instructor for 'three wonderful years'. He remained in the Army for the next sixteen years, serving on a range of postings, including stints at Staff College in England, a period in the Office of the Chief of General Staff and further time in the Armoured Corps. In 1980 he was promoted to lieutenant colonel and two years later took command of the Army's Armoured Centre. By 1984 Adrian had been promoted again, to Colonel. He left the Army in 1988 to return to teaching, only to find the profession much changed from that which he had known in the early 1960s. Nevertheless he found that teaching gave him 'a real sense of achievement' and over the years he has taken great pleasure in meeting those who he taught in schools or in the Army and hearing of their achievements. That, he said, 'would be the most rewarding part of my working life, whether army or civilian.'

Adrian, to borrow his own phrase, now lives in 'quiet retirement.'

The Woke say the Ashes win is about diversity. Isn't it about finding blokes who can play? 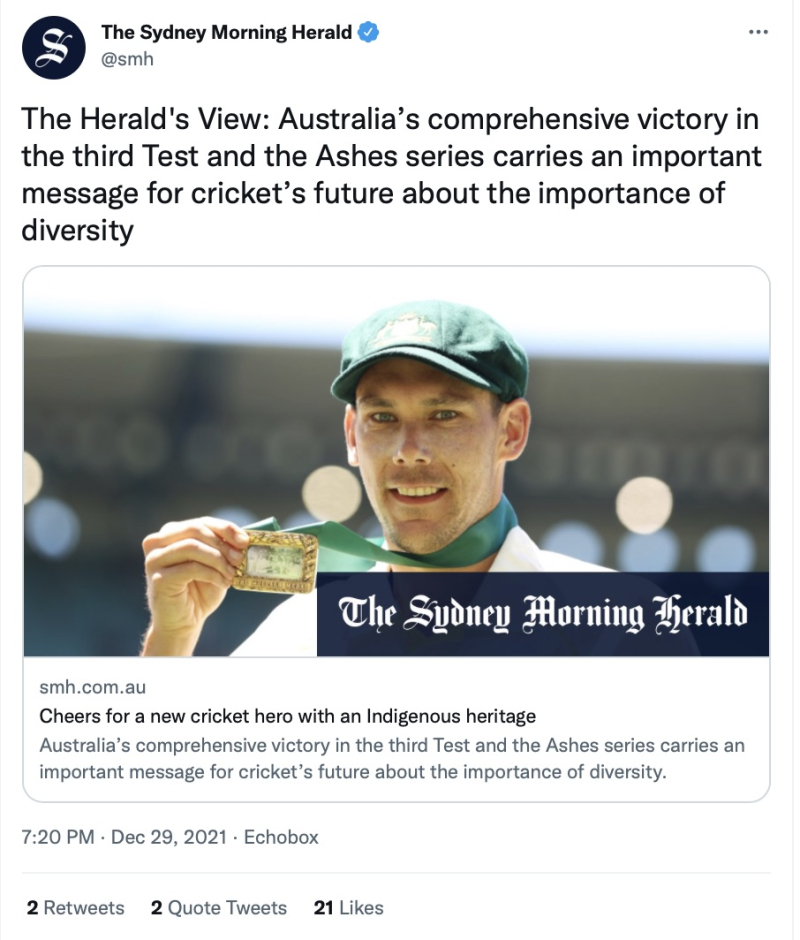 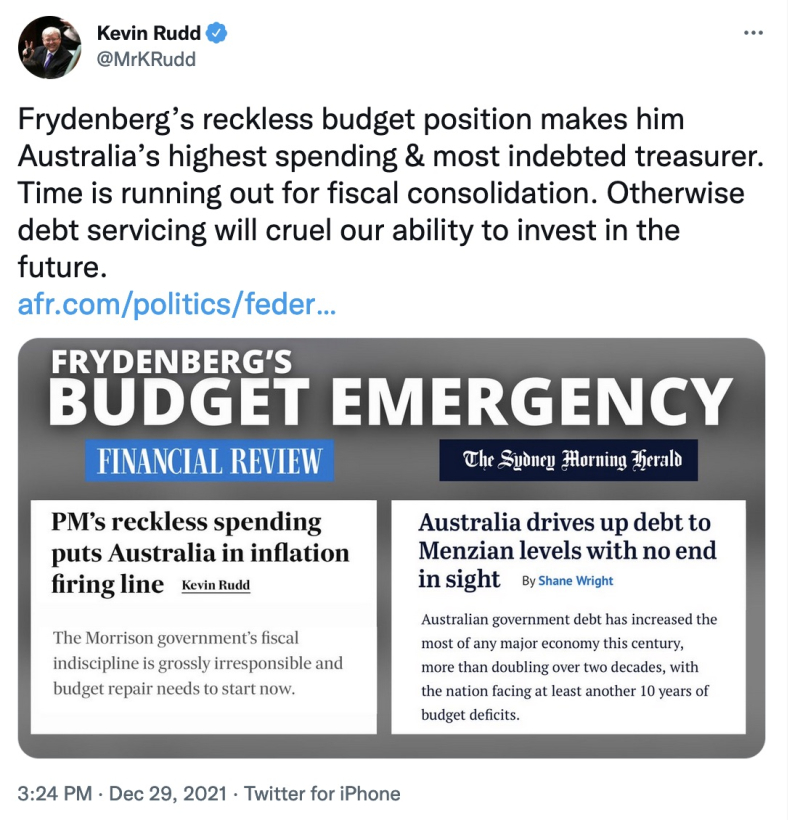 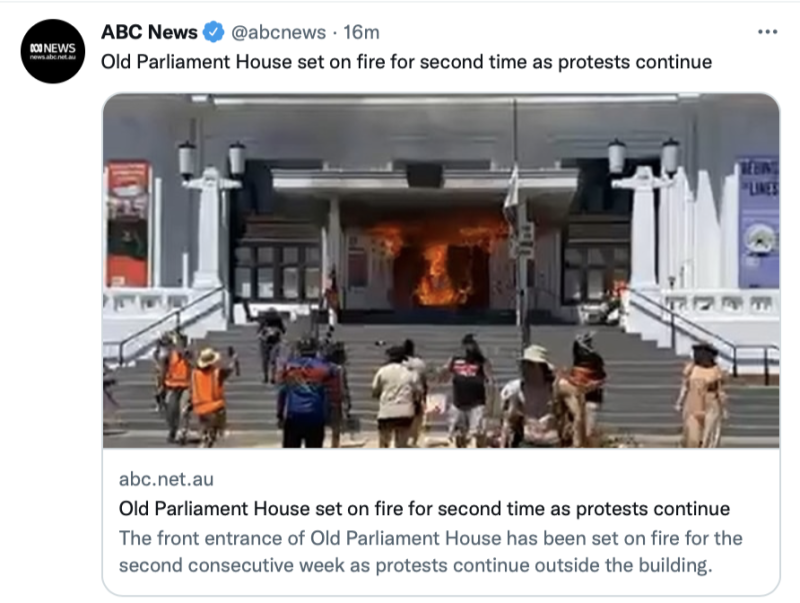 Victorians are so used to being told how and when to live: they tell you when you can leave your home, when to wear a mask, when to visit your family, to stay at home and starve if they aren’t jabbed…now grown adults are instructed on how to use a ladder.

Another killjoy wowser who can go to buggery. 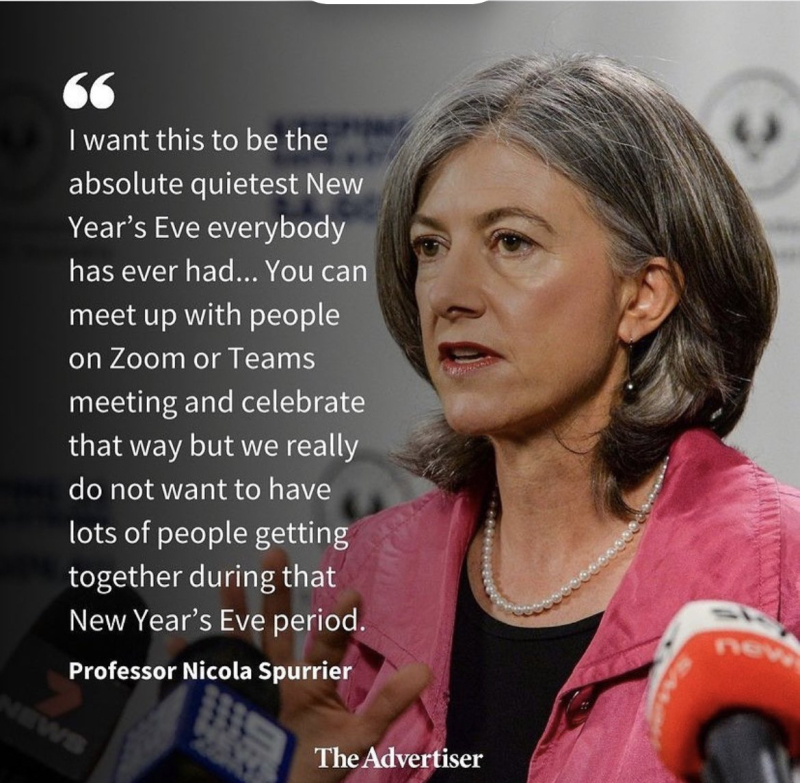 The most serious category of offence in this country is unAustralianism.

This is peak unAustralian. Getting nostalgic for Hawkie.