A divisional detective would finish the TWU forgery investigation within a week. It's taken the FWC 8 months to start its inquiries.

In July last year we reported on apparently false statutory declarations made by Wayne Forno and other officials of the Transport Workers Union.   Those declarations grossly inflated the TWU's membership numbers.  In turn, the inflated membership numbers delivered Tony Sheldon and his cronies unearned power and influence within the Labor Party.

Here are some of the early reports:

On 25 July 2014 we wrote to the GM of the Fair Work Commission to find out whether the FWC was inquiring into the matters we'd laid out - it wasn't.

On 4 August 2014 we wrote to the Australian Federal Police, the enforcement agency for breaches of the Commonwealth's Statutory Declarations Act:

On 24 October 2014 the AFP wrote back and stated the Fair Work Commission was the appropriate  body to inquire into the TWU irregularities.

It's now 8 months since the Fair Work Commission was made aware of the prima facie falsely sworn declarations and the apparently fraudulent claims regarding membership numbers within the TWU.   Our initial report contained evidence that would lend itself to a prosecution brief.  But there's been no prosecution.  There's been no investigation.  And until just over one week ago, the Fair Work Commission hadn't even started preliminary inquiries into the matter.

8 months after it received our report, this announcement appeared within a section of the FWC website  hidden several clicks away from public view.

The FWC process provides firstly for an inquiry into a reported breach of the law.

After the completion of an inquiry, the next step is to establish a investigation.

At the completion of the investigation, the matter may be referred to the Commonwealth prosecution agency for further action.

Our audio editorials and interviews - 75,000 plays for one a few days ago

I have been amazed by the growing popularity of the audio editorials on our site!

Here's a screen grab of the page that I see to edit/publish/monitor the audioboo recordings, this one from a few days ago about the Slater and Gordon/Arnold Bloch Leibler correspondence (spelling mistake and all) - the number of plays is recorded on a counter in the bottom right hand corner: 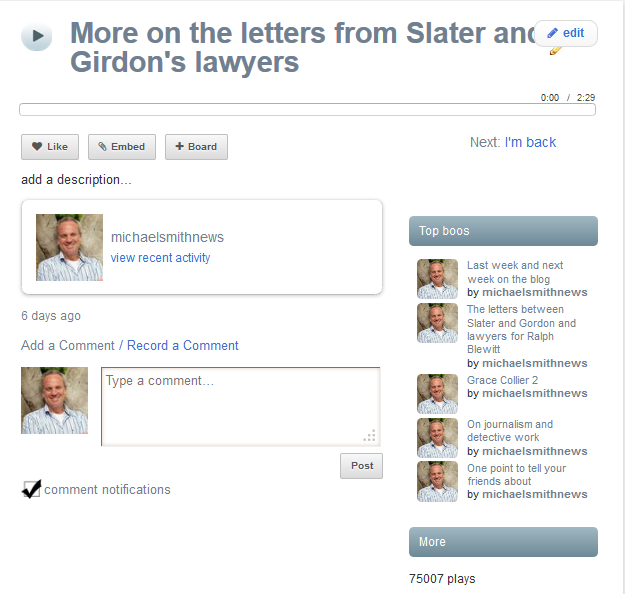 More than 75,000 - for one editorial is a breathtaking number in the niche markets we operate in.

Continue reading "Our audio editorials and interviews - 75,000 plays for one a few days ago" »