The Rudd practicing for when Australia is a one party state.

Imagine standing proudly on the forecourt of Parliament House, Canberra.   You're there with your family as guests of honour at an Australia Day ceremony where one of your relations is to receive a major award.   The military band and guard of honour march on in their slouch hats and uniform of their nation.   The urge to stand a bit taller as you look up at the Australian flag is irresistible and it's luminously lit in the January sun.   And beneath the flag, the Australian Coat of Arms with her Kangaroo and Emu never taking a step backwards - completing the Australian setting with dignity and the sense of Australia's permanance, unaffected by political or managerial stoushes.

Now add to that scene a huge painted political banner - the sort you'd see in Tiananmen Square.   It boldly promotes the achievements of The Party, with paintings of the faces of The Party's elder statesmen.

Make you sick?   Me too.   We have been very fortunate in Australia in generally having statesmanlike people who knew the difference between a time for being a Party member and a time for being the Prime Minister of Australia.

This is a case where the principle really does count.   It's a small thing but the message is loud and distinctly un-Australian.   The principle we apply in our system is that the resources of the Commonwealth, its money, management time, travel, support etc should be spent wisely and in the interests of all of our people.

In the internet-age, a website is a much more important showcase to the world than a physical office of last century may have been.   How the hell then can The Rudd and his staff be so disdainful of the whole of the country as to have the key message on the Australian Prime Minister's website devoted to an imagined demand by a grateful nation to be involved in the machinations of The Party.

Not representative Government.  Not the political process.  Not even public service.   Poor grammar notwithstanding, Prime Minister Rudd's message from the Government is the clamour from its people to contribute to The Party.   Will you get a bit of decorum Kevin and staff?   We're not China. 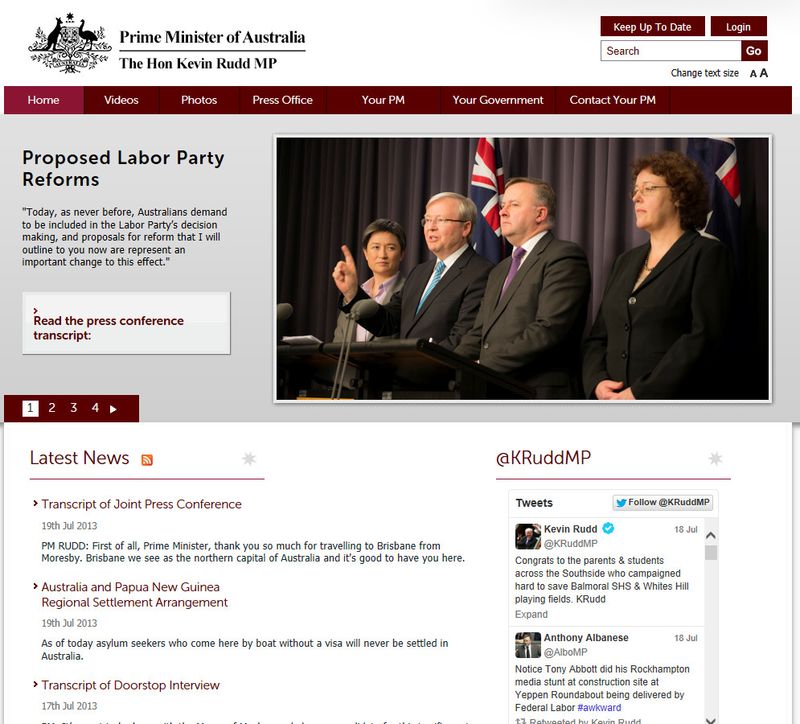